Can Museums cherish the past and be innovative at the same time? Let’s discover the 3 most beautiful Green Museums in the world!

Today, many museums are increasingly following the latest trends in sustainability: either by renovating ancient buildings or even by adopting the most innovative eco-friendly practices into new constructions.

But what exactly are Green Museums? We are talking about either a gallery or a permanent exhibition that incorporates one or more important elements of environmental sustainability. And this does not only concern the buildings themselves, but it involves also organisational management and educational initiatives promoted by each cultural centre.

As it follows, in the case of Green Museums eco-sustainability becomes an integral part of the Mission and Vision of the museum itself. In addition to safeguarding and protecting the environment, Green Museums strive also to spread awareness and promote the culture of sustainability by all available means.

How to be a Green Museum? A Green Museum features one or more of the following characteristics:

Are you curious to know about the most eco-sustainable museums? Let’s discover the Top 3 most beautiful Green Museums: from Russia to France, and all the way to the United States. All of them provide a perfect combination of tradition, innovation and a great deal of attention to eco-sustainability. Ready to go?

The Hermitage In Saint Petersburg: One Of The Most Beautiful And Greenest Museums In The World 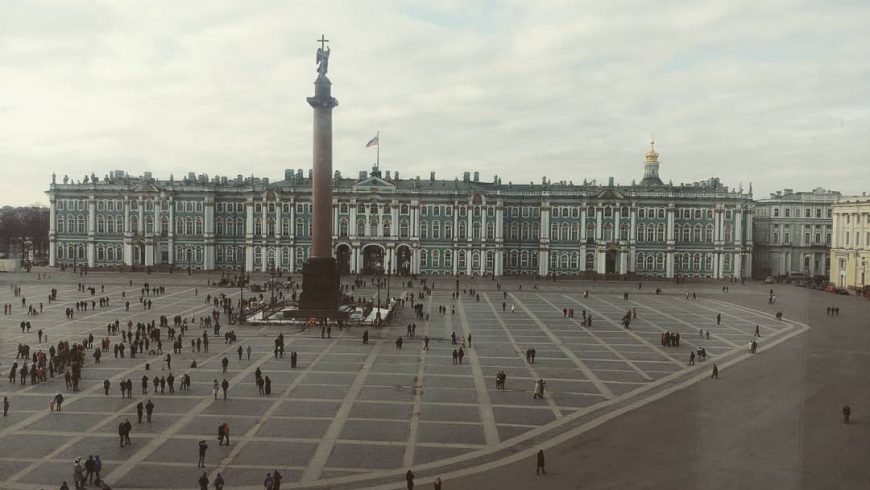 Unknown to a few, and loved by many the State Hermitage Museum in St. Petersburg houses one of the most important art collections in the world. Originally it was the residence of the Tsars, and today, it includes artworks by Caravaggio, Cézanne, Gaugin, Matisse, Picasso, Van Gogh…to name only a few. 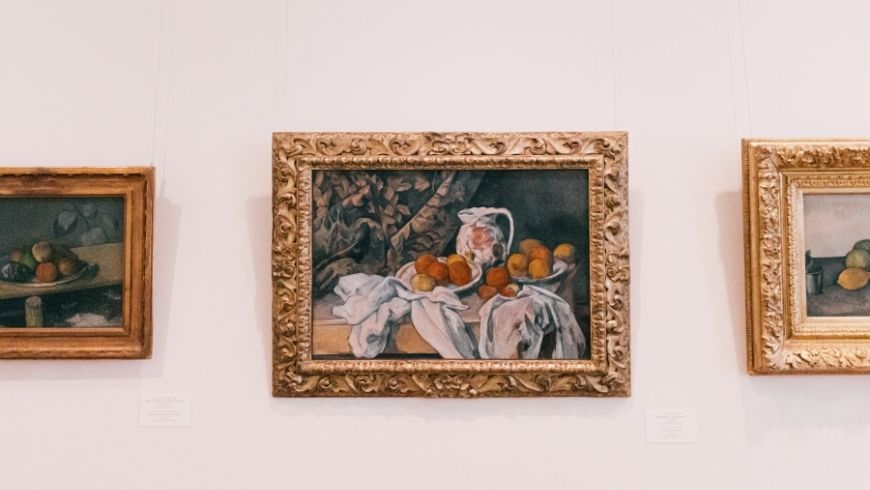 In addition to being one of the most visited museums, the Hermitage could also be considered the third greenest museum in the world. In fact, as following the recent trends in environmental sustainability, this whole architectural complex has managed to reduce the overall energy consumption by about 60%. And it was enough just to replace the traditional light system with energy-saving light bulbs. Easy, isn’t it?

Given the size of the museum and its importance worldwide, this strategy turned this magnificent building into one of the greenest museums on earth. This also proves that even an ancient building can be innovative, look forward and have a chance to play a role in the protection of the environment. 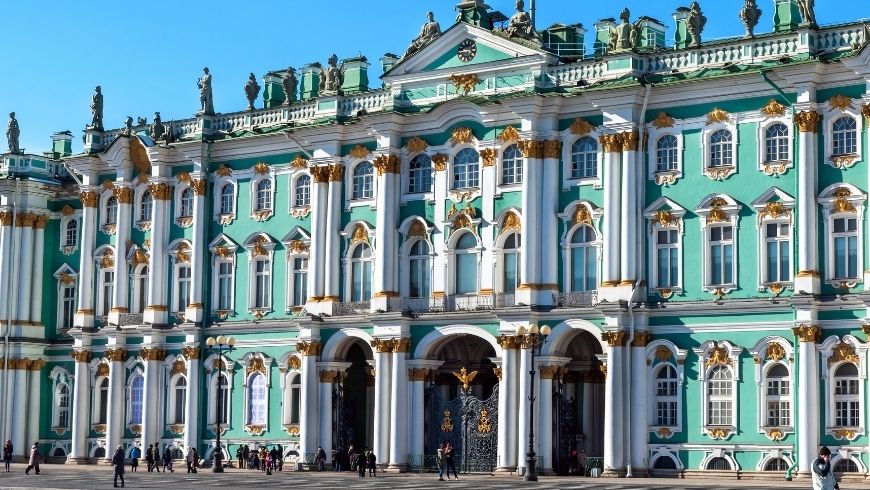 I know, it could be freezing in winter. But it is actually easy to reach the museum from anywhere along the Nevsky Prospect by foot – whatever the season. By walking along this 5-kilometre street, you would not only make an eco-friendly choice, but you would also get a chance to visit the most lively spots of the city centre at your own pace. This is by far the greenest way to reach the museum: make sure you wear proper shoes, and you won’t regret it.

The Parisian Quai Branly Museum: a Green Cultural Centre Inside and Out 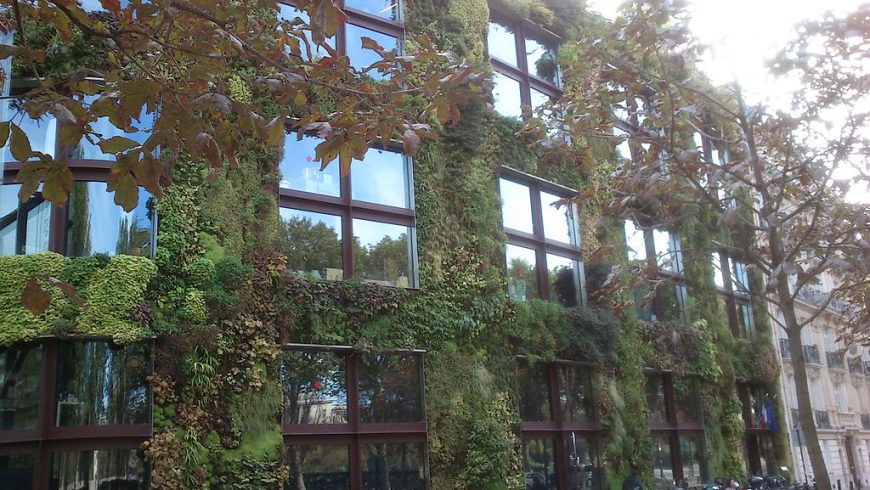 A short stroll from the Eiffel Tour, you will find the most exotic museum in Paris, the Quai Brainly Museum. Opened in 2006, this ethnological museum features indigenous cultures from Asia, Africa, Oceania and the Americas.

The Museum is famous for its green architecture: its most prominent feature is namely the astonishing 800mq vertical garden covering the building’s northwest façade. This green wall by itself is actually able to significantly improve the air quality of the city, as well as to reduce thermal dispersion both in winter and summer. Also, this museum is equipped with a 100% renewable energy system, which works with solar and geothermal energy. 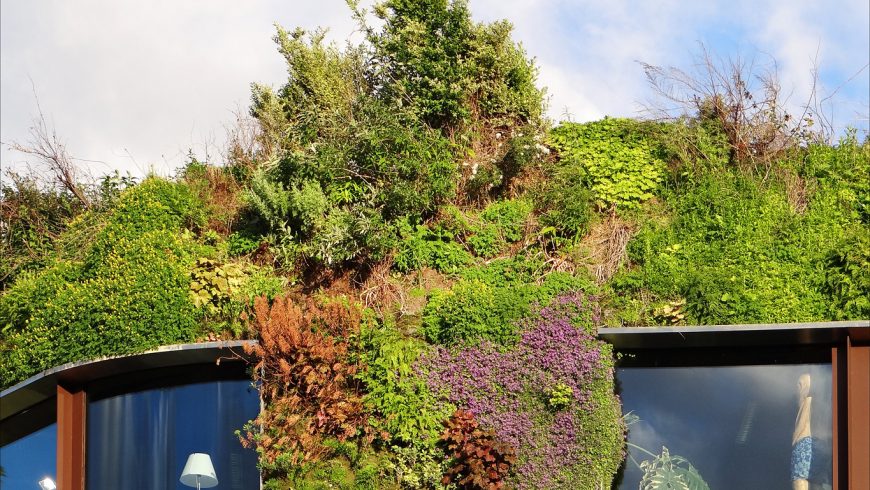 This green wall designed by J. Nouvel on the left bank of the Seine represents the perfect blend of architectural beauty, innovation and sustainability. The museum is certainly popular for its green appearance, which actually connects to a deepest green commitment towards environmental sustainability.

Want to know where to eco-friendly sleep near the Quai Branly Museum? Within a walking distance, you can find the iconic Hotel Gavarni: a refined haven of peace isolated from the hustle and bustle of the city. The hotel is committed to sustainable development and environmental protection. It is also the first hotel in Paris and the whole of Ile the France to be honoured by the European Ecolabel.

The absolute winner? The California Academy of Sciences in San Francisco 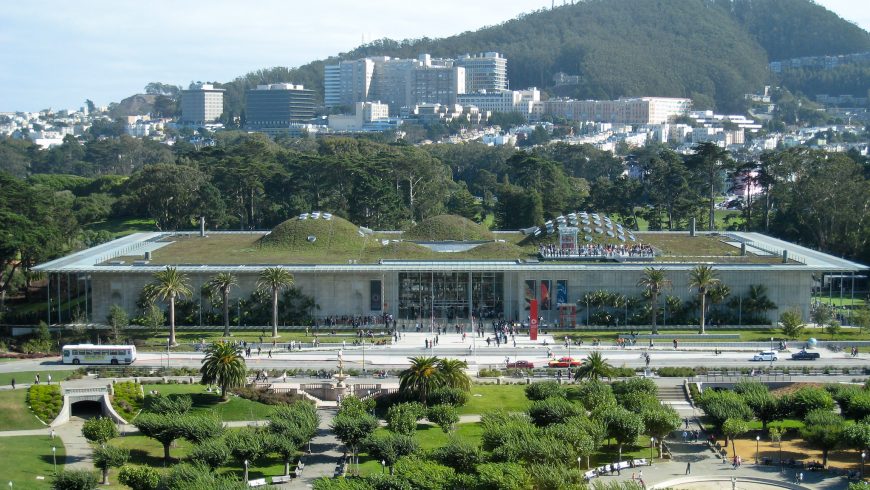 The California Academy of Sciences would certainly get the gold medal among the greenest museums in the world. This landmark scientific institution located in San Francisco perfectly combines education, awareness-raising of environmental issues and scientific research. By carrying out its projects in the most innovative ways, it is really a huge draw for tourists. It is also one of the largest museums in the world, as it is composed of more than 11 buildings. It includes an aquarium, a natural history museum, a planetarium and a huge rainforest exhibit. 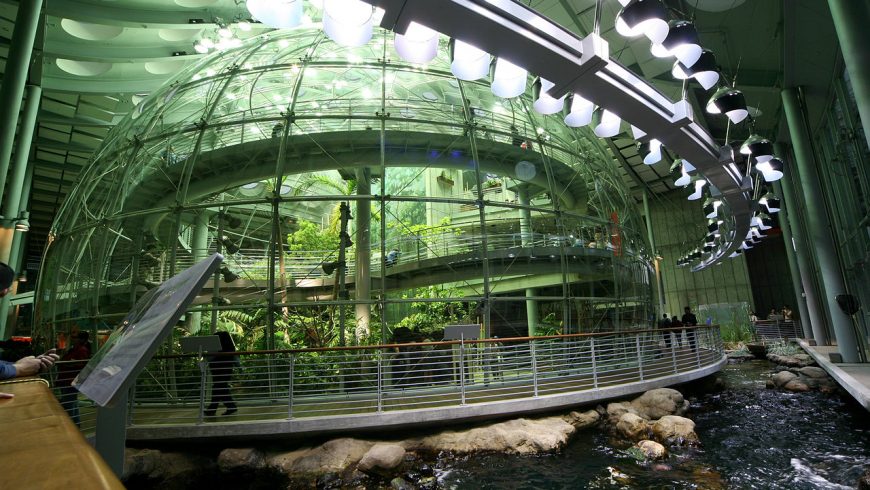 The Museum’s environmental commitment stands out even more as it is located in the iconic Golden Gate Park. Its signature green “living” roof was designed by Renzo Piano and completed only in 2008. It provides energy, controls wastewater and nourishes the various plant specimens (more than 46 million!). In addition to this, the green roof can reduce the energy requirements of the museum, as it keeps the building cooler. What’s more, air conditioning has been replaced with openable windows, while solar panels are the energy source for lightning. The metal structures are also made up of almost 90% recycled material.

This is great, right? But there is even more. According to many, the museum’s ace in the hole is actually its public commitment to better environmental education and the promotion of sustainability towards visitors. 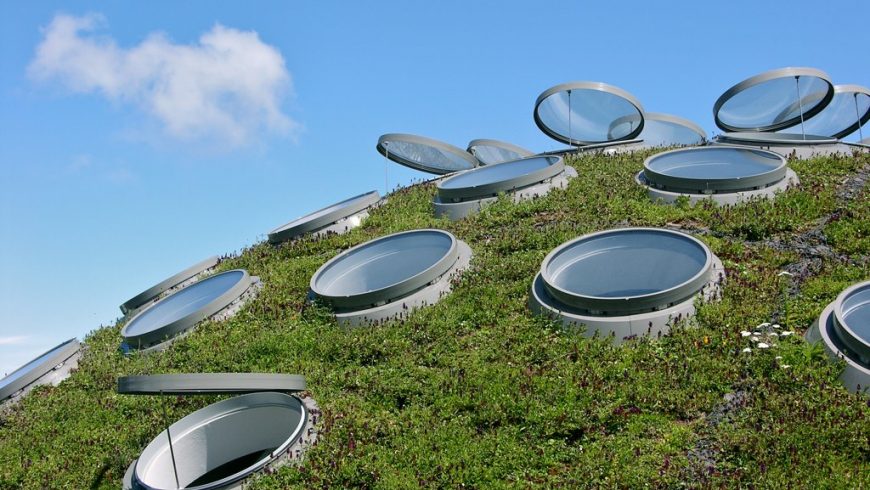 Why don’t you explore the iconic Golden Gate Park by bike? Cycling along its bike lanes is one of the best ways to respect the environment during your trip to California. All you need is a map so you don’t get lost. Try this, and escape the hustle and bustle of the city while enjoying some peace in the natural world. 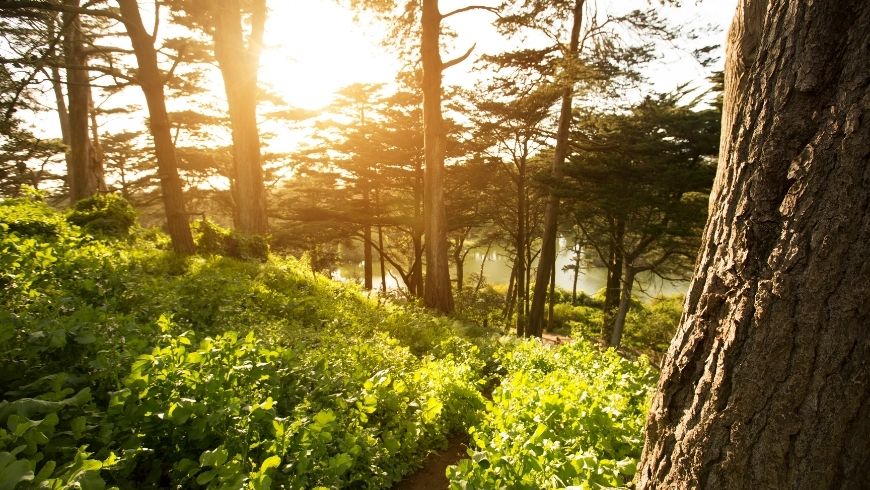 Green museums can then do both: look back and forward at the same time. In fact, thanks to the focus on sustainability, they manage to protect and respect the past and the future at the same time.

The spreading of scientific, artistic and cultural knowledge must then go hand in hand with the commitment to boost awareness of a new and global culture of sustainability. In the end, any museum should be a little greener and play its part in the protection of the environment.

Up to you now: have you ever visited one of these museums? Do you know any other green museum which could be included in this list? 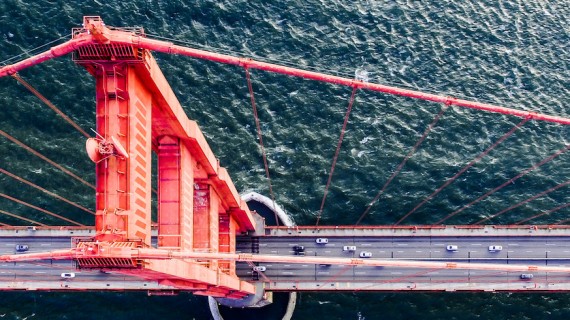 Cliffs overlooking the Pacific Ocean, pristine beaches where you can sea the seals, natural hot springs and Spanish missions that seem to come from a Zorro movie. All this along the 600 km that separate San Francisco to Los Angeles. Take time to explore one of the most beautiful stretches of California, the same one you’ve seen a […] 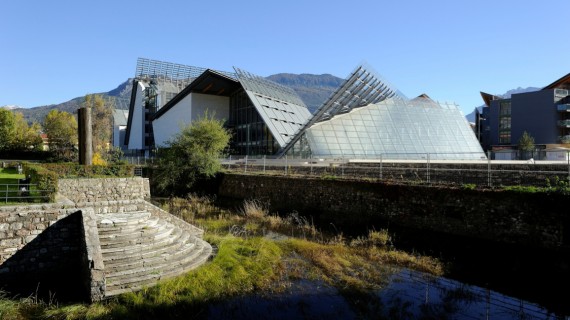 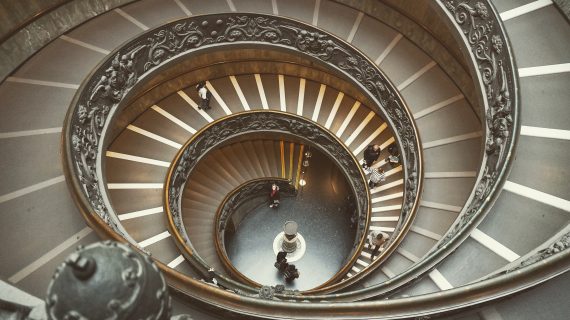 20 World Online Museums You Can Visit For Free, Without Leaving your Place

From the MoMa to the Louvre, here are the 20 most beautiful online museums in the world that you can discover for free, without leaving your home. All you need is an internet connection Museums online? What a great idea! Would you like to travel the world, visit museums and discover works of art, but […] 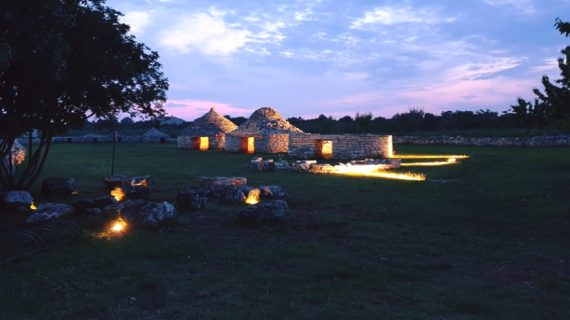 When you think about Istria, it might be its crystal clear sea, gorgeous beaches, or charming medieval cities and villages in the inland. But this region also has a wealth of exciting eco museums for sustainable travelers looking for experiences in harmony with nature and local community. Eco museums in Istria are immersing people in authentic local […]