Over 2000 km among history, culture, local products and natural beauties in Emilia Romagna. This project is meant to give even more value to the 14 suggestions for the perfect route going through the region, a unique destination for those who love to walk and to explore – in a green way! Are you ready for backpacking? 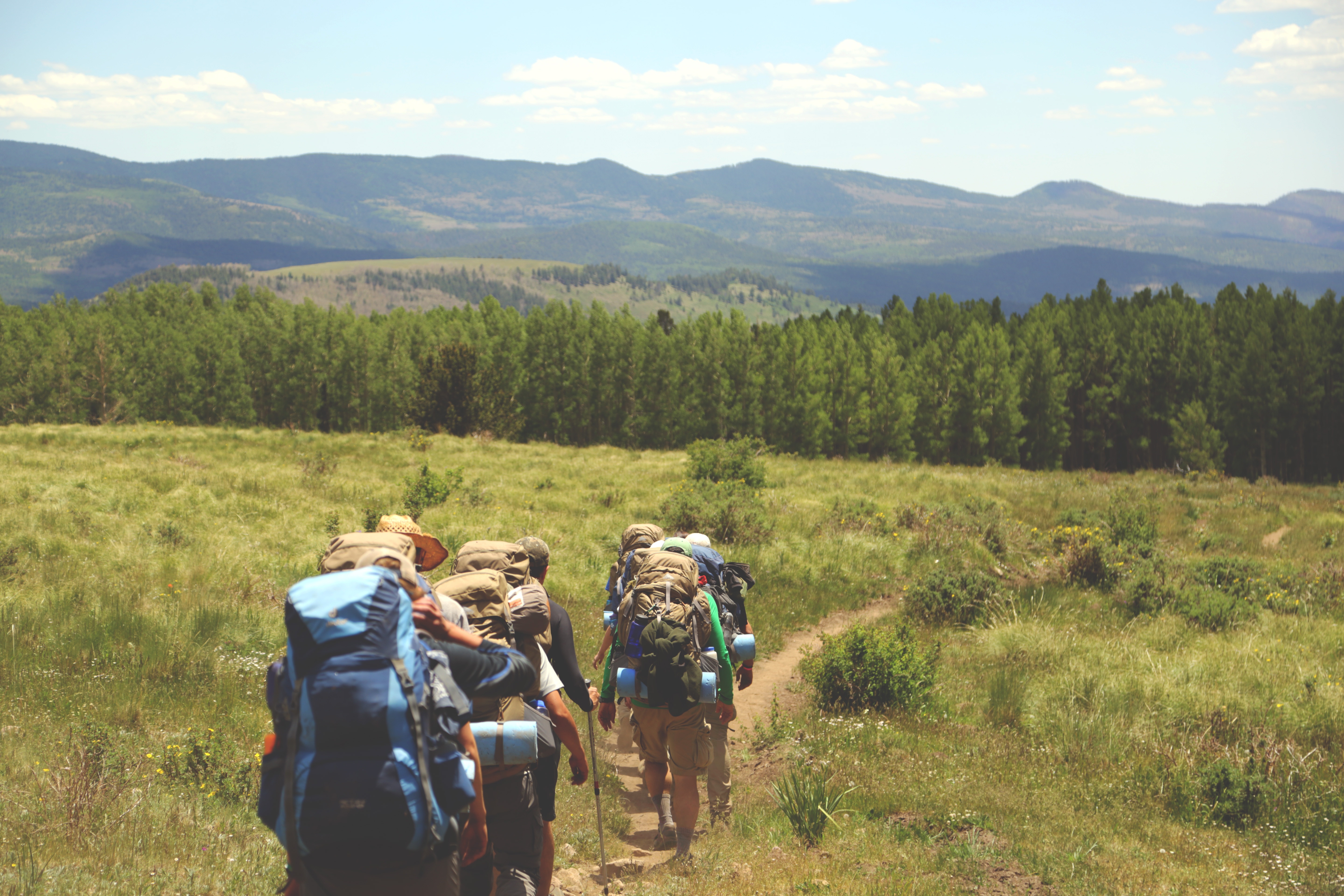 The project is all about slow-traveling, to promoting the 14 routes crossing Emilia Romagna from North to South, from West to East. 2016 was entirely dedicated to the Cammini d’Italia (The Ways of Italy), and the website “Cammini dell’Emilia Romagna” (https://camminiemiliaromagna.it/it) was born along with this initiative. Here you’ll find detailed information regarding legs, hosting facilities, spirituality and places where to eat. Many trails where to adventure on foot, or with you bike, alone or with friends… Let’s discover them together! 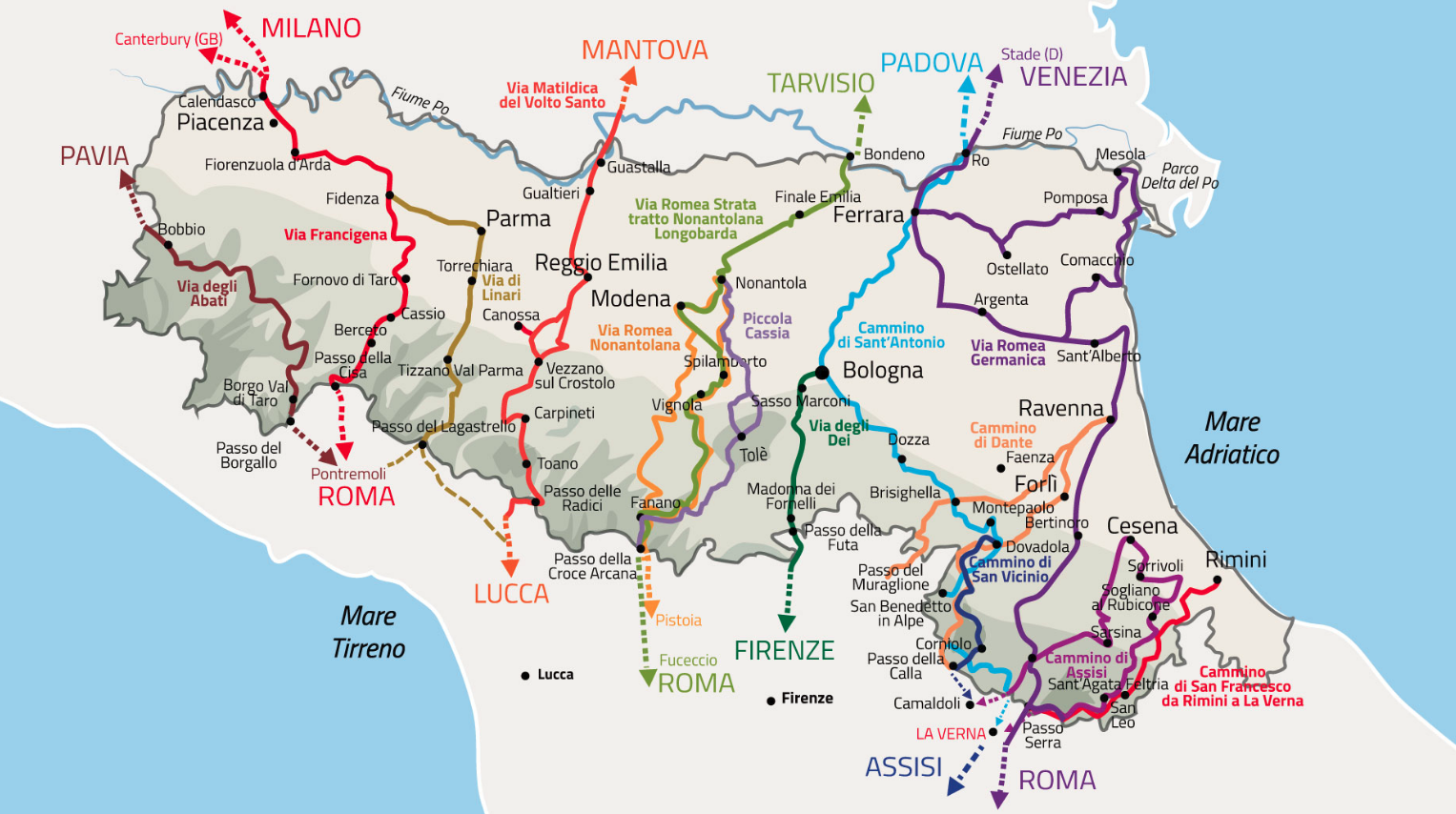 14 Routes in Emilia Romagna, via camminiemiliaromagna.it

The Abbots’ Way twists and turns for 90 km from Pavia to Pontremoli and it used to be the ancient way for monks on their way to Rome before the Via Francigena was built. On foot or by bike, it goes through religious secret spots and gorgeous buildings.

Running parallel to the Abbots’ Way, there’s the Via Francigena. It once linked Great Britain and France to Rome, but if you’re not looking for such an extreme challenge, don’t you worry! Of the original 1800 kilometers, just 143 cross Emilia Romagna, from Piacenza to Pontremoli. But the final destination is the Holy City!

From Fidenza to Parma, towards Tuscany. The Via di Linari runs close to many medieval architectural beauties and it actually owes its name to one of these, the Linari’s Abbey, which once dominated to Tuscan-Emilian Appennines.

Another interesting name is the one of the Matilda Trail (Via Matildica del Volto Santo, literally Matilda Trail of the Holy Face), linking Mantova and Lucca in 140 km through Emilia Romagna. The route used to be owned by Countess Matilde di Canossa. When arriving in Lucca, hikers will find the Holy Face: it’s said to have saved a pilgrim’s life back in 1334, making the ax turn towards the executioner.

The Via Romea Nonantolana, our fifth route in Emilia Romagna, was made official in the Lombardic times. Leaving from Nonantola’s Abbey, spiritual and monastic retreat for monks from all around Europe, you’ll reach Fanano, where this trail meets the Via Francigena.

Not only an Emilian trail, but an European one. The Romea Strata Route (in this case, the stretch named Longobarda Nonantolana) would link middle-east European lands to Rome and it still holds this international essence. From Badia Polesine to Firenze, through 186 km in Emilia Romagna.

The Piccola Cassia is a 170km long ancient Roman itinerary from Modena to Pistoia (from here the Via Cassia proceeds and reaches Rome). Along the way you can admire the typical calanchi, where clayey rock has been eroded by water, creating in this way a stunning natural scenery.

The Way of Gods owes its name to the small hamlets it goes through, as Monte Venere, Monte Giunone e Monte Adone (Mount Venus, Juno and Adonis respectively). The route dates back to the Romans’ Age and, leaving from Bologna, it takes from 4 to 6 days on foot to reach Florence, but you can also do it with your MTB!

9. The Way of Sant’Antonio

The Cammino di Sant’Antonio (Saint Anthony’s Way) laves from Padova, the city where the Saint died, and crosses Emilia Romagna to get to the Santuario della Verna (La Verna’s Sanctualy, in Tuscany). In fact, Saint Anthony lived in these lands most of his life. Among the many trails suggested by the project, this one also offers the chance to make an organized pilgrimage and even a pilgrimage by night!

10. The Pilgrimage to Assisi

An ancient religious itinerary crossing many other itineraries: the Pilgrimage to Assisi (Cammino di Assisi) will let you discover plenty of hermitages, as the one of Camaldoli and Franciscan centers to recall Saint Francis and Anthony’s lives. Twinned with the Spanish Camino de Santiago, the Assisi’s one winds for 72km in Emilia Romagna.

The Via Romea Germanica is for the most adventurous ones: 260km in Emilia (but over 2000 on the whole), following the footprints of Saxon and Swabian Kings and Emperors, who used to walk it to get to Rome. There are many unique spots and sceneries to discover on the way: from the Comacchio’s Valleys, to Ravenna, to the Argenta’s Valleys.

A circular route among hamlets, sanctuaries and natural beauties, the Way of San Vicinio (Cammino di San Vicinio) unfolds from Cesena to Camaldoli and La Verna. But there are also many possible detours, to reach secret off-the-track religious places.

The idea of creating the Cammino di Dante was born thanks to a club of Dante-enthusiasts, which promoted not only a physical -but also and most importantly cultural- itinerary. 194 km from Ravenna, where his tomb is located, to the house the Supreme Poet was born in, in Firenze.

Where Dante was born, in Florence

Walking on the Via di San Francesco, you’ll go from the Adriatic Sea to the Tuscan-Emilian Appennine walking for 5 days, walking from Rimini to La Verna. This is a young route, since it was only born in 2013, linking different stretches of other itineraries somehow linked with Saint Francis.

Each route of these 14 itineraries is a journey aiming at discovering peace, spirituality and -most of all- of ourselves. What are you waiting for?

The Way of St. Francis to discover Umbria