The season when the snow whitens the mountain peaks has already arrived. And precisely in this period, tourists and ski enthusiasts come from all over the world to ski and go sledding on the fresh and soft snow. Very often the only way to reach ski resorts is by car. But what if we told you that there are 11 mountain resorts, in Italy and abroad, where go skiing by train is easy and fun?

Let’s find them out together!

This pearl set in the Maritime Alps is located in the province of Cuneo, on the border with France. It is very well connected to both the Côte d’Azur and the Ligurian Riviera and thanks to the transit of the Cuneo-Ventimiglia railway it was one of the first ski resorts in the Alps at the beginning of the twentieth century.

This destination will allow you to experience a slow holiday dedicated to relaxation and sustainability. With regard to the latter, it is important to underline the commitment to respect for the environment carried out by the city. Once you arrive at your destination by train and take a few steps outside the station, you can then take advantage of the free and electric shuttle service or get on the ski-shuttle. In this way you will arrive, in a few minutes, at the ski lifts of Riserva Bianca and you can already enjoy the snow-covered slopes at high altitude.

Moreover, traveling by train has its advantage, especially on the price of the daily skipass. By presenting the train ticket, you will pay € 15 on weekdays and € 25 on public holidays.

In addition to the possibility of reaching the town by train, you can opt for the Ski Limone Express service. It is a shuttle service to be booked within 48 hours in advance, which allows you to get to Limone Piemonte from Cuneo. In this case, the service also thinks about the traveler’s savings. Indeed, those who use this service can include the skipass by paying a total of € 34 on weekdays and € 40 on Friday, Saturday and Sunday.

Limone Piemonte is a guarantee when it comes to sustainability. In the city center, a charging station for electric cars has been installed. This is to encourage sustainable mobility and to support those who already own electric vehicles. But that is not all. The commitment to respect for the environment can also be recognized in ski resorts. The various ecological hotels and B&Bs arranged along the snow-covered slopes reduce waste and energy consumption to a minimum and above all offer organic food at zero kilometers .

2. By train to Bardonecchia – Piedmont

Bardonecchia station is the last Italian stop on the Turin – Lyon international railway line. Traveling by train, you can admire the landscape from the window that gradually transforms, leaving space for whitened expanses. Bardonecchia is a very popular destination for tourists and skiers as it is located in Val di Susa, one of the most important centers for winter sports.

It boasts two ski areas: Colomion-Les Arnauds-Melezet and Jafferau, reachable thanks to a free shuttle. The first area is larger and connects several hamlets. The second, on the other hand, is less extensive, but offers slopes at a higher average altitude.

In 2006, Bardonecchia was also chosen as the venue for the Olympic snowboarding competitions of the Winter Olympic Games known as Turin 2006.

If you love the Aosta Valley and its peaks, Pila is the perfect destination for you. Forget your car and go skiing in complete serenity taking the train that arrives directly at the station of this mountain resort. In front of the station you will find the Aosta – Pila cable car which will allow you to comfortably go up to the slopes in just 17 minutes.

This wonderful ski resort will leave you breathless: a whitened panorama will appear before your eyes with a view of the main Aosta Valley peaks including Monte Rosa and Monte Bianco. The area is vast and indeed has 70 kilometers of slopes and tracks that stretch from 1800 m to 2750 m of the Couis.

If reaching a mountain location in Lombardy by train was a difficult undertaking in the past, today it is almost child’s play. This was made possible by the collaboration between the Lombardy Region and Trenord which has created an integrated train-bus-skipass service that allows you to manage connections with shuttle buses that take you to the slopes. The destinations included by this service are Chiesa Valmalenco – Sondrio station, Aprica – Tresenda station and Montecampione – Piancamuno station.

Chiesa in Valmalenco is a mountain village located at the bottom of the homonymous valley. To access the slopes of Alpe Palù you can use either the Snow Eagle funicular railway or the chairlift that departs from San Giuseppe. The 35 kilometers of slopes of the resort are suitable for everyone, from the oldest to the youngest and for this reason it is also a perfect destination for families with children. Leave now for your skiing holiday here in Lombardy!

Marilleva is a little corner of paradise in the scenery of the Brenta Dolomites, in Val di Sole. It is divided into two places: Marilleva 900 and Marilleva 1400. The first can be reached by train via the Trentino Trasporti “Dolomiti Express” railway which crosses the whole Val di Sole up to Trento. In wintertime, it is possible to take advantage of the train + ski package offered by the Funivie Folgarida Marilleva company to those who arrive to ski in the resort using the train. In this case you can enjoy a substantial discount on the skipass price. From Marilleva 900 it is then possible to reach Marilleva 1400 through a cable car.

The Folgarida – Marilleva ski area includes two ski areas with well-equipped slopes and 95% artificial snow. The beauty of these slopes is also given by the fact that they are illuminated so as to allow skiing at night. If you prefer to extend your experience on the white slopes, we recommend you take the Superskirama Dolomiti Adamello Brenta skipass valid from one to 14 days which allows you to ski on the slopes of Val di Sole and 6 other Trentino valleys.

Thanks to the new Versciaco – Monte Elmo railway station you can reach the ski resorts of Dolomiti di Sesto and Plan de Corones in about forty minutes with the Ski Pusterial Express service. It is a train that allows you to move from one destination to another in complete comfort.

This service allows you to move between the two most popular ski areas in Alto Adige, but also between other places such as Villabassa and Dobbiaco where you can stay during your mountain holiday.

It is undoubtedly the Italian district par excellence with modern and comfortable facilities. It has 115 kilometers of slopes for alpine skiing surrounded by breathtaking views. There are 5 black slopes including the famous Sylvester and other 4 used for night skiing.

From winter 2011-2012 Plan de Corones has been connected to Perca station. The latter was built specifically to facilitate the movement of travelers from the train to the RIED cable car that goes up to Plan de Corones.

Tarvisio is the best known and most appreciated ski resort in the Eastern Friulian Alps. Being located in the most north-eastern part of the region, immersed in Val Canale, the splendid alpine resort is a meeting point between Italy, Slovenia and Austria. For this reason it is also easily accessible by train. Indeed, this destination is located on the international railway line that connects Friuli to Austria.

The ski area is the largest in the region and hosts the Women’s Alpine Ski World Cup every two years. You can choose between two skiable areas: the one of Monte Lussari and the one of Monte Florianca. You can’t miss the Prampero slope. It swoops down from Mount Lussari to the valley floor, facing the town of Camporosso, allowing you to practice night skiing thanks to the lighting. Do not miss this Italian pearl!

Now, let’s move outside Italy, to Zermatt. You have surely heard of it as it is one of the most famous international ski areas located at the foot of the Matterhorn, in southern Switzerland.

When it comes to going skiing by train, Switzerland stands out. Indeed, it is undoubtedly the state that has given the greatest impetus to the development of railway connections to Alpine resorts. Zermatt is just an example of a destination that can only be reached on board a train since, access by car is not allowed. In Zermatt, sustainability has become part of everyday life. Only electric vehicles circulate in the village. In addition, the ski lifts are ISO 14001 certified and the high-altitude restaurants boast an energy self-sufficiency given by photovoltaic systems and solar panels.

Also in Switzerland, we recommend the Diavolezza, a crossing place and a ski resort located near Pontresina. Bernina Diavolezza station is the local railway station. It is located on the Bernina railway considered a UNESCO heritage site, managed by the Rhaetian Railway. The journey aboard the famous red train starts in Italy in Tirano and then continues in Switzerland. The last two stops are Bernina Lagalb station and Bernina Diavolezza station. A skilift and a ski bus connect the two ski areas.

The train journey will allow you to admire from the window unique landscapes. They will enchant you and make you dream thanks to their beauty. You absolutely cannot miss it!

At the end of our journey to discover where to go skiing by train, Sankt Moritz is all that remains. It is perhaps Switzerland’s most famous ski destination and is easily accessible via the railway line. Also in this case, you can take the train that leaves from Tirano. Then crosses the Bernina pass and descends into the Engadine. Furthermore, St. Moritz station is known for being the terminus of several Swiss railway lines, some of which are very scenic.

The main ski areas, from the largest to the smallest, are three: Corviglia, Corvatsch and Diavolezza. There are slopes suitable for anyone: from those dedicated to sledding to those for night skiing, up to the natural gravel bob track that is unique in the world. To welcome you, fast and comfortable lifts and an abundance of chairlifts especially on the Corviglia side. Leave immediately for your skiing holiday.

Have a good eco-frindly journey! 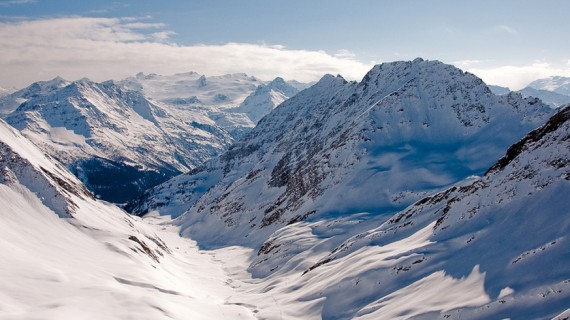 Winter season is coming, and what is better than a weekend in the mountains? Recently, moreover, there has been a new valorization of the beautiful nature that mountain landscapes can offer, often conditioned and modified by the developed ski resorts. Going back to the origins of life in the mountains, we propose 3 alternatives to […] 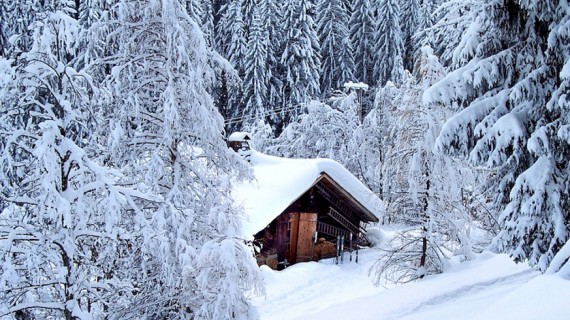 The timeless charm of a mountain chalet surrounded by nature makes it the ideal place to spend winter holidays in order to recharge yourself. Through snow and forests of high altitude, an holiday cottage is suitable for all, from families with children, who can play outdoor, to romantic couples in front of the atmosphere of […] 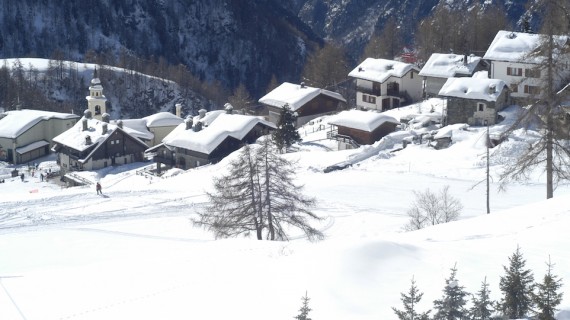 Chamois and La Magdeleine: your car-free holiday in Aosta Valley

Chamois is a small village of Aosta Valley where cars can’t arrive. The village is accessible only by chairlift, and or from La Magdeleine by 4 and a half km of pedestrian path. La Magdeleine and Chamois are two small alpine villages that have a total of 200 people who have embraced a eco-sustainable lifestyle, deciding to […] 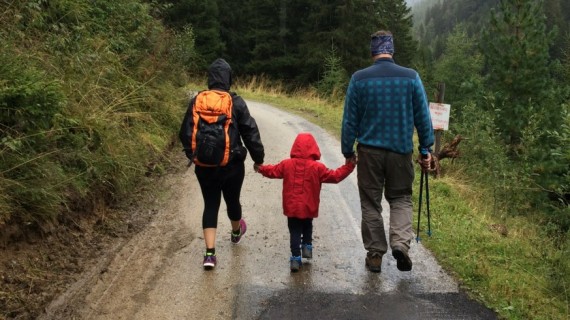 From Alps to the Italian Appennines, 3 ideas for a family-friendly green vacation. Not the usual hotels, but unique places where you can enjoy the silence, meet new special people, discover the territory and experience something really authentic. We have received this lovely letter and we have decided to share it with you, together with […]