The attractiveness of travelling to Scotland needs no introduction. Despite it’s forever grey and wet weather, Scotland is almost always in the top 5 of any ‘Most Beautiful Countries’ list. Even coming first in many – including this one.
But what should you do there, if you travel? Outside of it’s two major cities – Edinburgh & Glasgow – it’s the Scottish countryside which wins all the awards. And there’s one amazing way to see some of the best.
It’s a 7-day hike, and it’s called ‘The West Highland Way’.

I had the absolute privilege of completing it 2 years ago, and I can’t help but gush over it at any given opportunity.

What Is The West Highland Way? 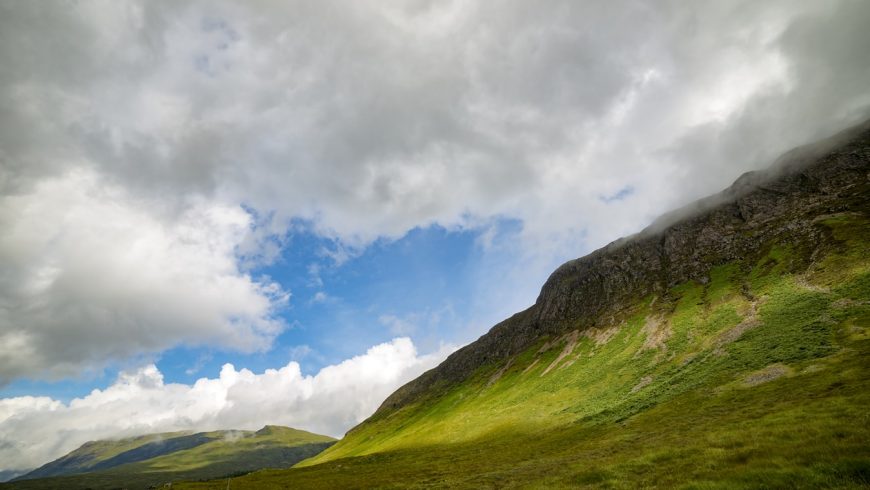 Photo by Sigge Bjerkhof on Unsplash

The trail begins just outside of Glasgow, in a town called Milngavie. A quaint little town just 4 miles from where I grew up.
Try and pronounce Milngavie… I dare you.
(It’s pronounced “mo guy”. The first of many nonsensical place names you’ll discover on the route).

‘The Way’ stretches a full 96 miles northwards. Snaking it’s way through around the stunning Loch Lomond, up through hills and valleys, over and into the Glencoe mountains, and finally finishes in a small town called Fort William. Right next to the largest mountain in the UK – Ben Nevis.
Along the way you’ll be sure to see many typical Scottish sights. 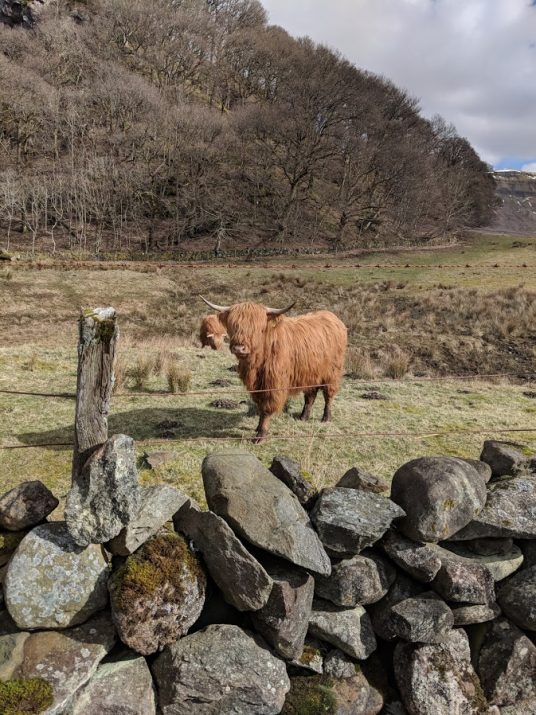 As a redhead myself, I can only hope to match this hairstyle one day. Photo by Craig Anderson 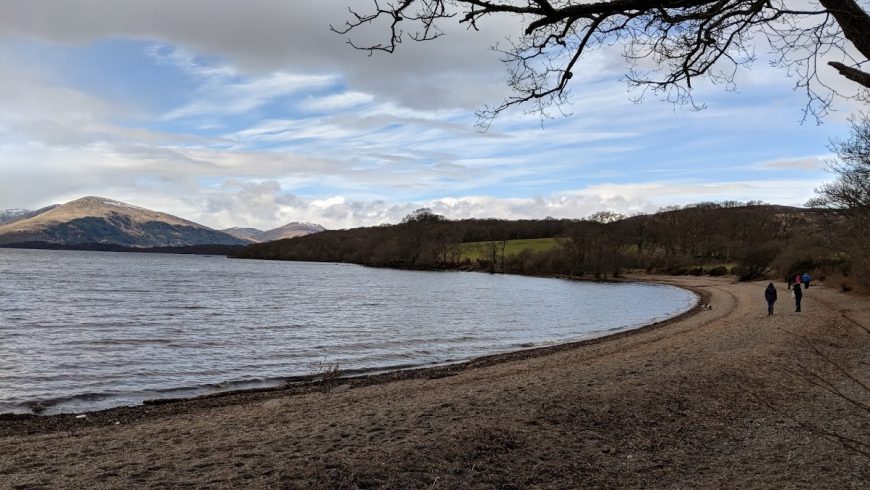 We may have more rocks than sand, but that doesn’t make them any less beautiful in my book. Photo by Craig Anderson 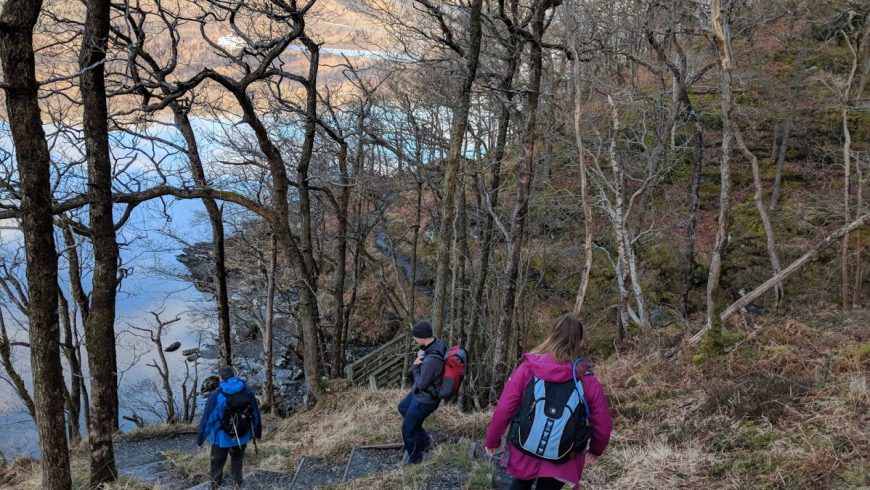 One of the toughest parts is a constant up-down scramble by the Lochside. Photo by Craig Anderson 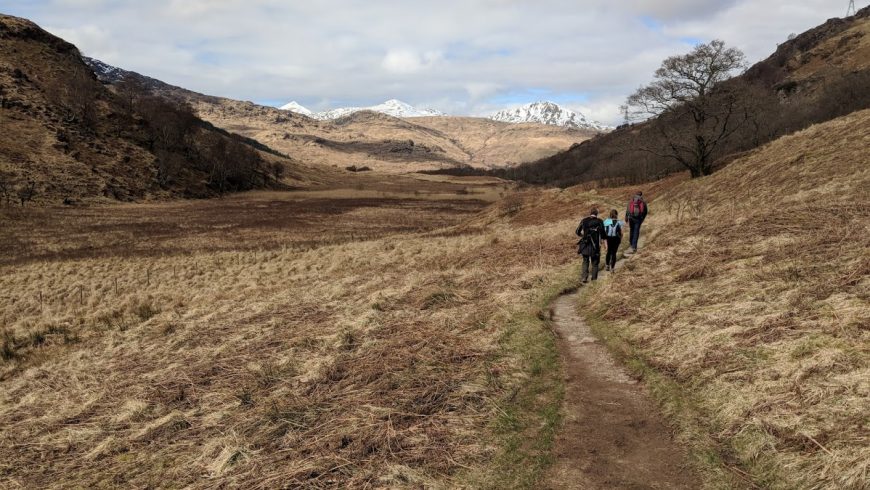 The flat open spaces can leave you wondering if you’re in the highlands or in the wild west. Photo by Craig Anderson 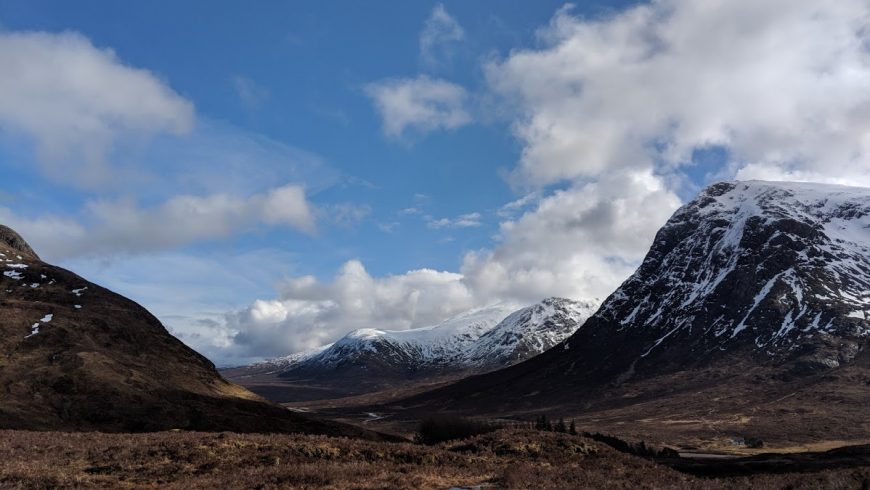 Thankfully, the trail only demands you and admire the snow-capped peaks from afar. Photo by Craig Anderson 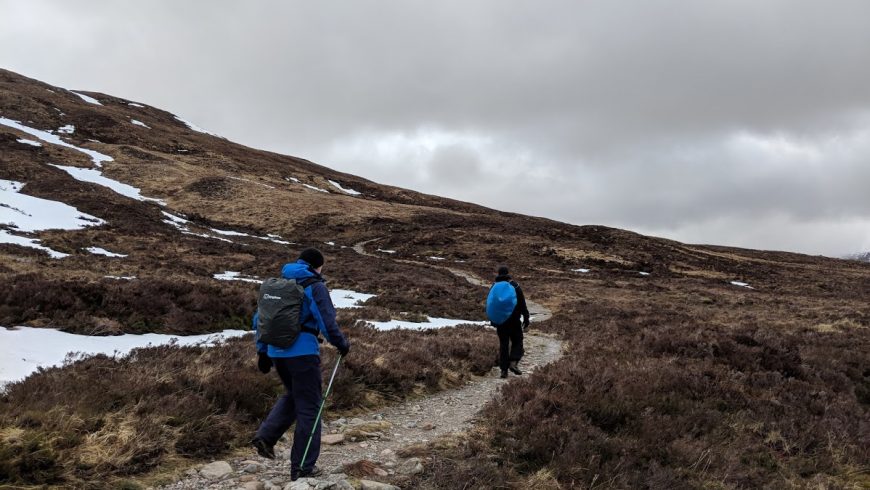 Unless you’re in the peak of summer, you’re bound to be able to get a snowball or two at the highest altitudes. Photo by Craig Anderson

And back down again 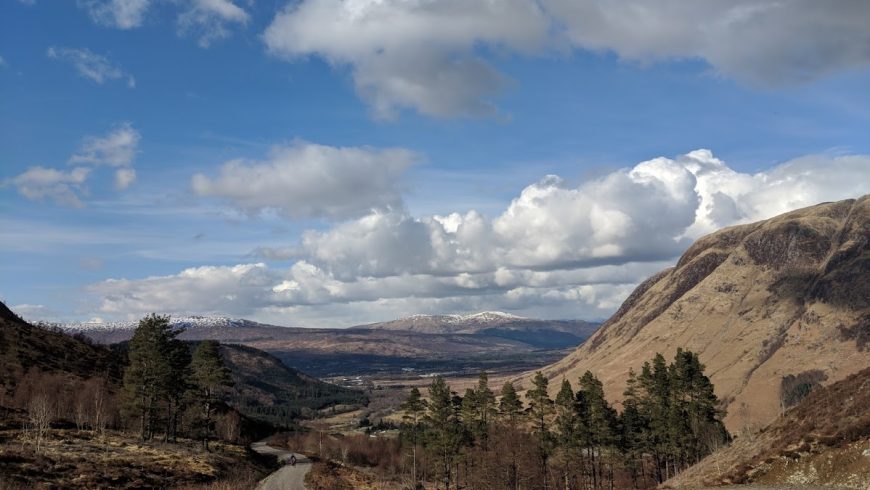 The final trail to Fort William, and a well-earned beer. Photo by Craig Anderson

Now, I’m not here to describe the West Highland Way in detail. Just one quick google and you’ll get tons of information about it. Here the map of the route.

The West Highland Way is the #1 hiking trail in one of the world’s most beautiful countries.

Instead, as a local and someone who’s done it, I’ll share some of my advice and tips with you.

When’s the Best Time of Year to Go? 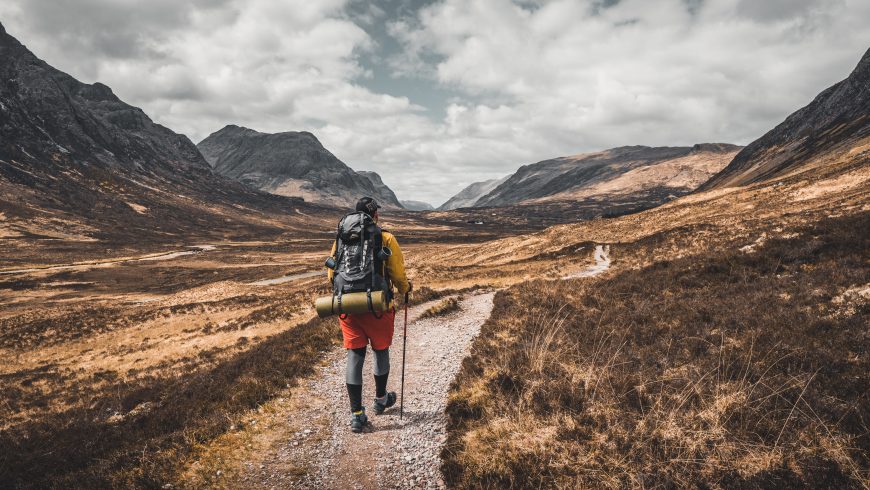 Photo by Krisjanis Mezulis on Unsplash

Anyone unfamiliar with Scotland doesn’t know about our mortal enemy.
(No, not the English – that’s a whole other story).
I mean the enemy in amongst our own lands.
We call them midgies.
These are tiny, miniature mosquito-like bugs that love to bite you. And cause no-end to your itchiness.
They all come out when it’s warmer in summer, which is why the best time to go is in Spring.
Walking the West Highland Way in Springtime (late March – late April) is your best bet at avoiding such a constant annoyance. It also gives you a good chance of getting decent weather. Though that will always be a gamble!
As a walker, I also find that you don’t want things too warm. A roasting hot day can be torture when you’re trying to hike uphill for your 10th mile of the day.

How Hard Is It?

I’ll not kid you, it’s not for the faint-hearted. By the end, almost our whole group had funny styles of walking because of how sore our feet were!
The paths can be quite hilly and rugged, but it’s not like you need hiking sticks or snowshoes. Just a good pair of walking boots.
The way can be split into 6 or 7 days. This means an average of walking 16 miles a day, or 13.7 miles a day. Personally, we did 6 days which fits quite nicely into a ramp-up.

Ramping it up like this works quite well for two reasons. First, your body gets used to it (though you should do a bit of training before hand). Second, you get used to it. By the third day, your whole group will be masters of taking quick breaks, navigating the paths, and starting your day right.

For us, on our first day we were practically tourists. A late start, long lunch, and plenty of time doodling on breaks.

By the 20-mile day?
We were machines.

We left by 6.30am, we called timed breaks every other hour, knew our route, and knew how to keep each other motivated.
That may sound a bit serious – but we did 20 miles in a day! The other days you can afford to be a bit more relaxed. 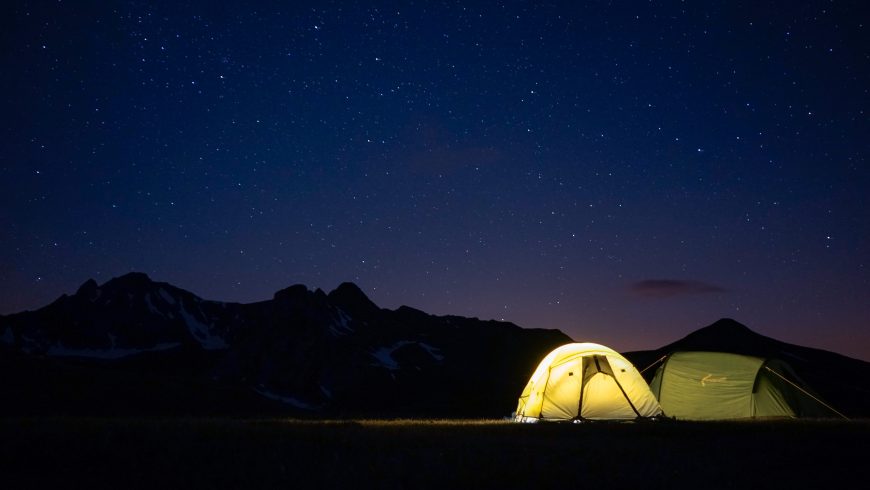 You absolutely can camp the whole way. There’s plenty of dedicated campsites along the trail, and Scotland is very open with making fires in most parts of the wild.
That said, there’s a much more “luxurious” option which we opted for.

Which is to stay in Bed & Breakfasts along the way, and have your gear driven from one stop to the next. So you only carry what you need each day with you.

While this sounds like a cop-out, it’s a very common method of tackling the trail. There’s enough places to stay in the small towns, and a popular enough route, that it’s quite easy to organise this way around.
If it wasn’t for doing it this way, I think we would’ve needed an extra day on the trip.
(All of this said, campers will be calling me ‘not a real hiker’ for this!).

Either option is fine, just go with what would suit you best. I will say that – while camping can be amazing – pay very special attention to the weather reports.
I have a friend who camped the whole way with her partner, and it was a bit of a nightmare trip for them thanks to horrible weather. For us, having somewhere to stay let us rest up and fully enjoy walking the way, rather than going through a double hardship by carrying camping gear and sleeping on the ground.

What Else Is There To Do On A Scotland Trip? 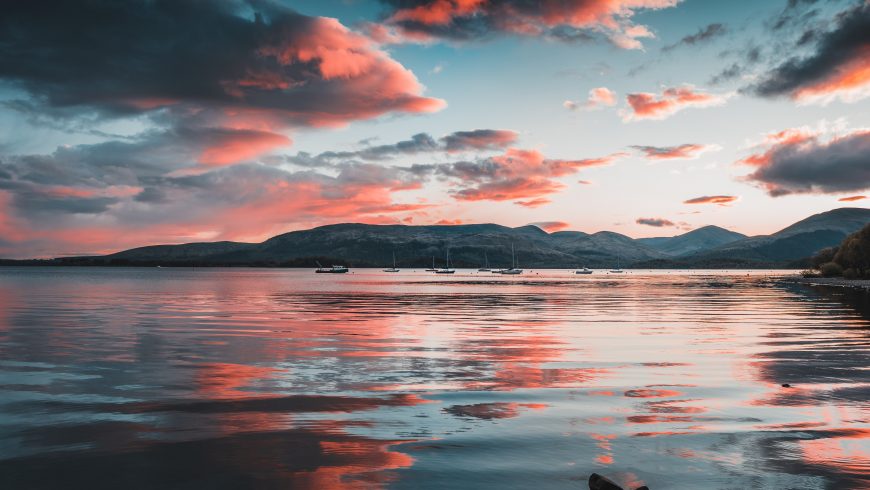 There’s enough I could write here for a whole other article. Many of them, in fact.
I’ll give you my top recommendations for tourists visiting Scotland:

That’s about all there is to it!

Walking the West Highland Way was one of the best trips I’ve been on in my life, and I can’t recommend it enough. If you do go, I guarantee you’ll love it, too. Just try to time it well with the weather! 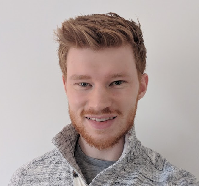 Craig has been Scottish all his life and hopes to stay that way. When not working as an engineer, he helps run a Home & Appliance blog over at Appliance Analysts. 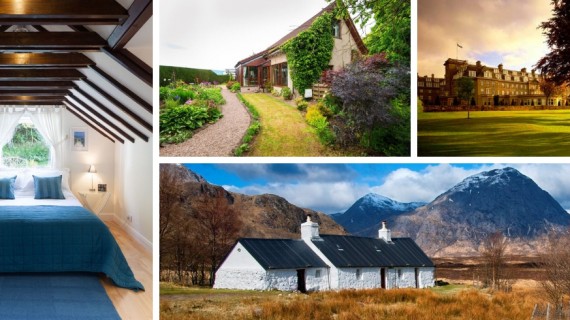 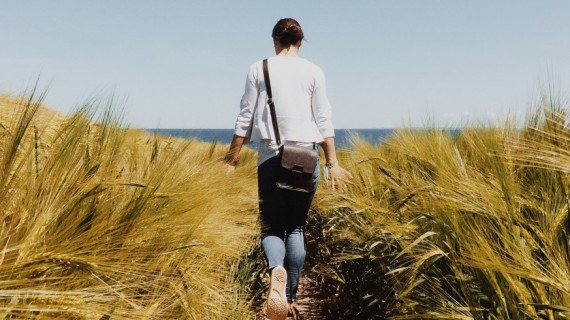 Nature as the remedy to be happy: In Scotland is real

Do you believe that a walk in the woods is the perfect remedy for most of your problems? You are not alone! Scottish doctors started prescribing open-air activities as treatments for their patients. Since last 5 October, the benefits that nature offers to mankind have been recognized once more. Where? In Shetland Islands, in the […] 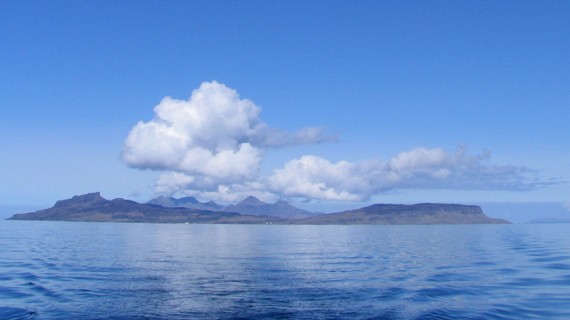 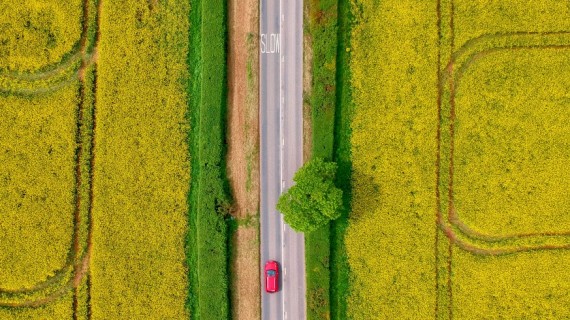 The unknown England: 10 things to do in Devon

Devon is a county in South-West of England that is located in Cornwall, where Exter is the capital. Among fishermen, surfers and English tea you can relax and enjoy your green holiday. Here there are 10 things to do during your trip in Devon: 1. Discover the History along the Jurassic Coast From Devon to […]