A fairytale-like fortress, resembling the architecture of the Hogwarts castle, retouched with Arabic elements. Rocchetta Mattei lies deep in the hills of the Reno valley, not far from Bologna, and amazes adults and children.

From liberty to Moorish, Rocchetta Mattei melts different styles. Built in the late 19th century, abandoned for more than thirty years, it was opened again in August 2015. A dozen of the wonderful rooms is accessible to the public, since the fortress is still under restoration. Besides, it’s very easy to reach the location from the town of Riola (province of Bologna) and from the small village of Pioppe. If you are a wander-lover, you can get to Rocchetta hiking on the hills and finding some rest along the Reno river after the visit.

The story of Count Mattei 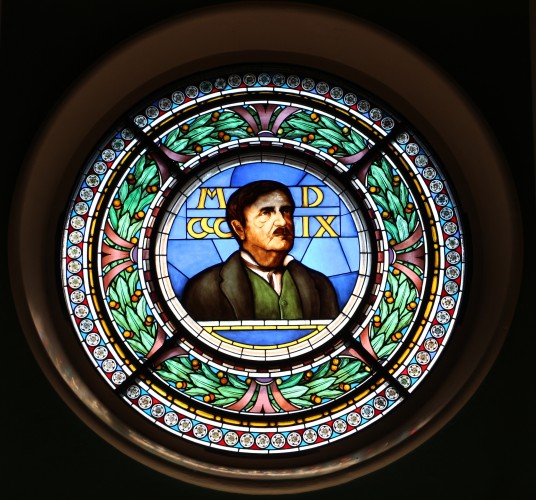 Cesare Mattei (1809- 1897) was born in a wealthy family of the region. He grew up in a stimulating artistic and literary environment, meeting many intellectual of the time as Marco Minghetti, Antonio Montanari, Rodolfo Audinot e Paolo Costa. In 1837 co-founded “Cassa di Risparmio in Bologna”, a savings bank.

His impatience towards the government made him declining the offers of important public roles. In 1844, his mother’s death affected him deeply. He thought that medicine had failed in curing the woman, so he decided to study a “new medicine”, to avoid the pain that the classical one caused to patients.

In 1850, Mattei bought the land of the old fortress of Savignano and built the Rocchetta, where he lived for the rest of his life. When he passed away, the estate was inherited by his adoptive son. Since 2005, it has been managed by Cassa di Risparmio.

Mattei discovered electrohomoeopathy, a derivative of homeopathy. He claimed that this technique could cure every disease, even the cancer. It isn’t based on actual electricity: the Count created secret recipes for 30 vegetable compounds that can “shake” the body as an electrical discharge. He claimed that every illness originates in the blood or in the lymphatic system. Different natural elements, properly combined, could fix any problem that affect either one or the other biological fluid.

The visit is guided. It is a fascinating journey in a suggestive reality, where anything is as it seems. Surprise yourself figuring canvas where there are mosaics, drawings where there are tapestries. You’ll see papier-mâché instead of wooden ceilings and wooden archs instead of stone ones.

The lion-yard reproduces the famous Alhambra of Granada (Spain) and the wonderful majolica coverings come directly from Seville.

One of the most amazing corners is the chapel of black and white archs, that reminds of Mezquita in Cordoba. You don’t want to miss also the particular ceilings in the studio, that has light bulbs, and in the Count’s bedroom, which is almost sound-proof.

Finally, see the Room of the 90s, where the Count wanted to organize a party for ninety-year-olds, but he died younger. 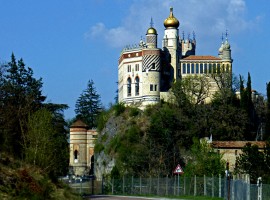 View of the fortress, Ph by pom’, via Flickr. 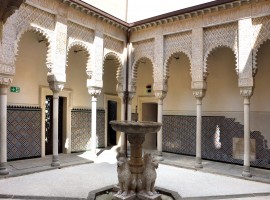 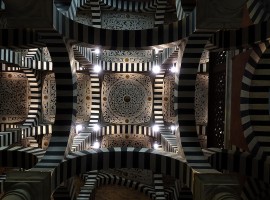 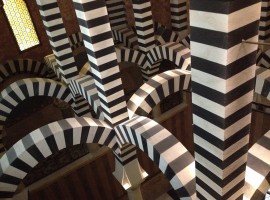 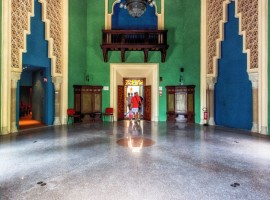 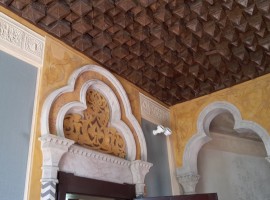 Wooden ceiling in the studio

How to get to Rocchetta Mattei

The best way to reach the location is getting to Riola, through SS 64, connecting Bologna to Pistoia (Tuscany). You can also arrive to Riola by train, from both cities. At this link (in Italian) you will find more information on visiting times and the costs of admission tickets to Rocchetta Mattei. 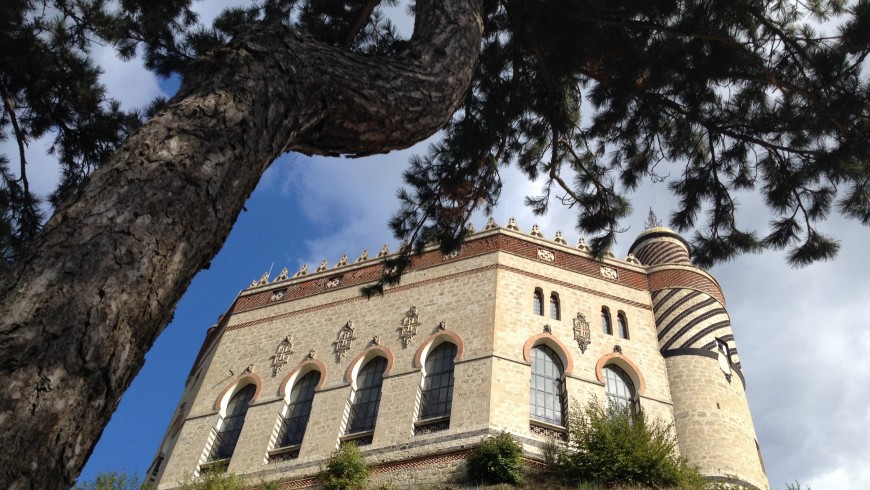 Here two eco-friendly and cheap suggestions if you want to spend some nights in the magic hills surrounding Bologna:

14 ideas to discover Emilia Romagna on a route