The ancient city of salt is now an important sustainable tourism destination among the German Alps, with several slow mobility ideas. From routes by e-bike to the spa, here’s what you can’t miss in Bad Reichenhall.

The history of Bad Reichenhall has over 4000 years and is linked to salt. The name of this small town in the Alps reminds us: Reichenhall is literally “Rich in Salt“. ‘Hall’ is in fact the ancient Celtic word used to denote salt. We are not far from Salzburg, a city that has flourished through the economy of Bad Reichenhall salt (for this there’s the word “Salz” in the name of one of the most important Austrian cities). 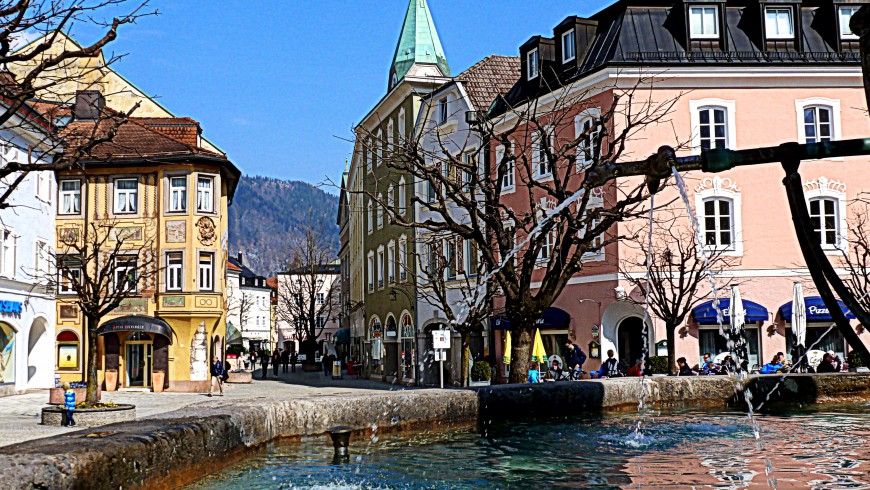 If salt made Bad Reichenhall rich for centuries, now tourism, slow mobility and sustainability do it. Bad Reichenhall is one of the Alpine Pearls and is emerging as excellence of sustainable tourism in the Alps for its soft mobility choices. 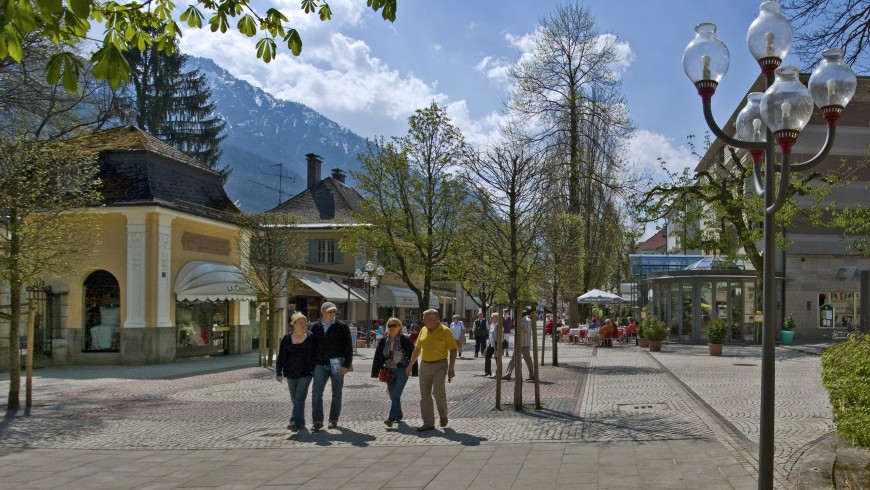 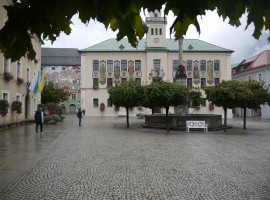 The main square of the town, photo by Silvia Ombellini 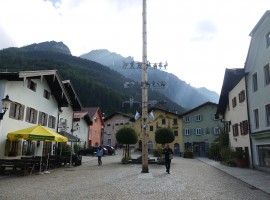 The oldest square of the town, photo by Silvia Ombellini 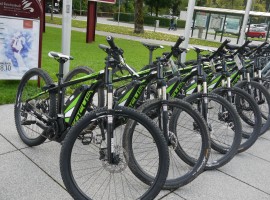 You can get there by train. You can along the more than two kilometers area of the historical center closed to traffic (the largest pedestrian area in Germany), among historic shops, beautiful churches, historic salt factory and brand new spas.

And then you can rent an e-bike to discover the surrounding area, among lakes, forests, small huts and shelters. Ready to leave? We tell you the best experiences to do in Bad Reichenhall! 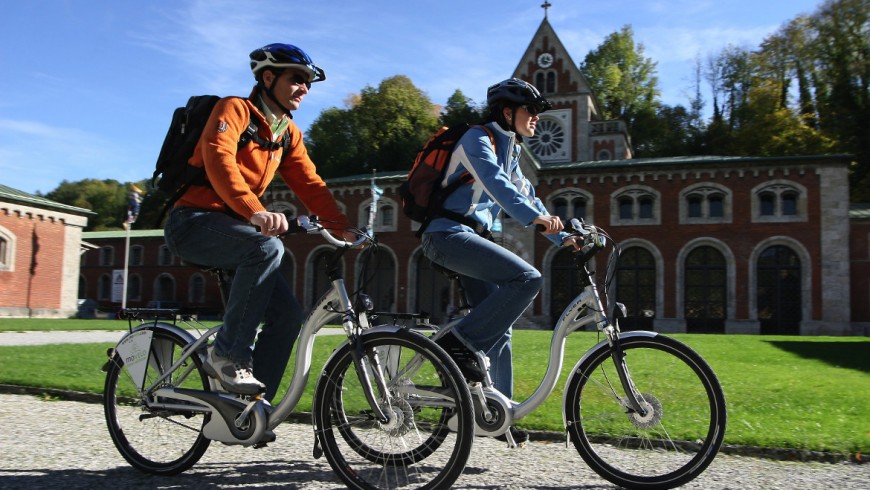 In e-bikes from the old town to Thumsee

Having rented our e-bike, we start from the heart of the city to get to the beautiful Thumsee lake, hidden among beautiful landscapes. This crystalline green jewel offers unforgettable moments in every season, summer is perfect for a refreshing dip, while in winter it freezes becoming a big ice-skating rink!
A few steps from Thumsee, we find the nature reserve of Seemösl, with its marshy lake, covered by hundreds of water lilies. 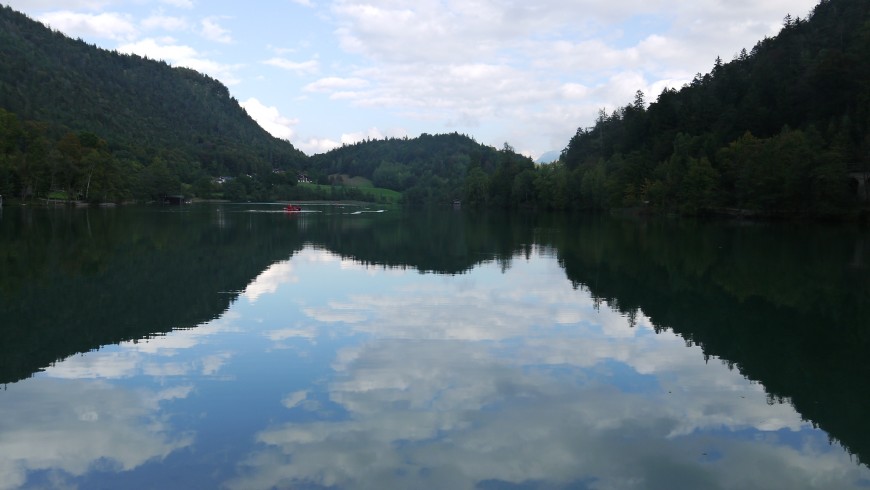 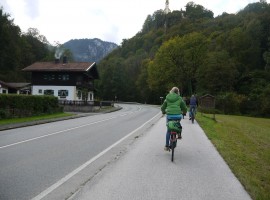 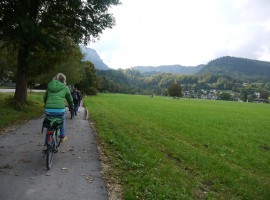 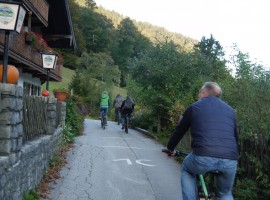 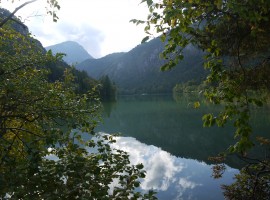 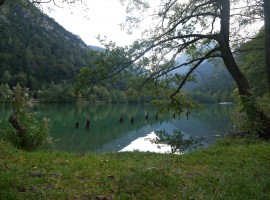 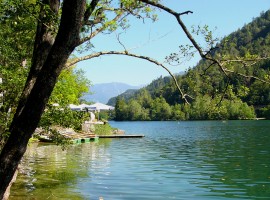 But what really make this route so special is not only the beauty of the lake. It’s the incredible views that we encounter along the way. The sense of freedom, the air in your hair and the pristine nature surrounding Bad Reichenhall.

On either side of the bike path we observe the cultivated fields, and we are surprised by boxes of local fruit in sales (there is only a simple sign and a box to leave the money).

On the background, there’s a mountain in which a beautiful castle is set. Then the intense scent of the forest, and the silence that is the background to the slight noise of the wheels of our electric bikes. The intense blue of the lake finally announces our arrival at Thumsee. 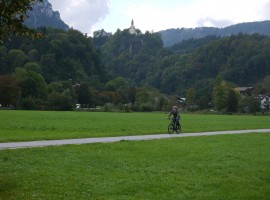 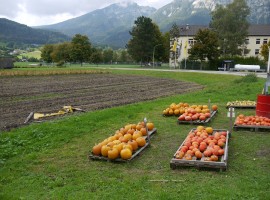 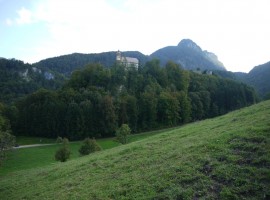 The castle along the way, photo by Silvia Ombellini 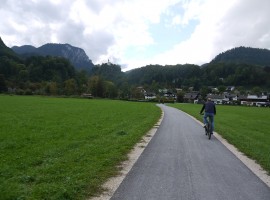 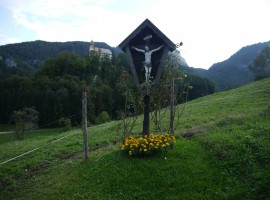 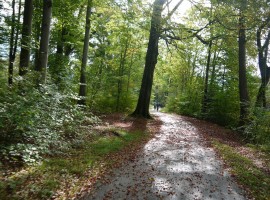 The forest, photo by Silvia Ombellini 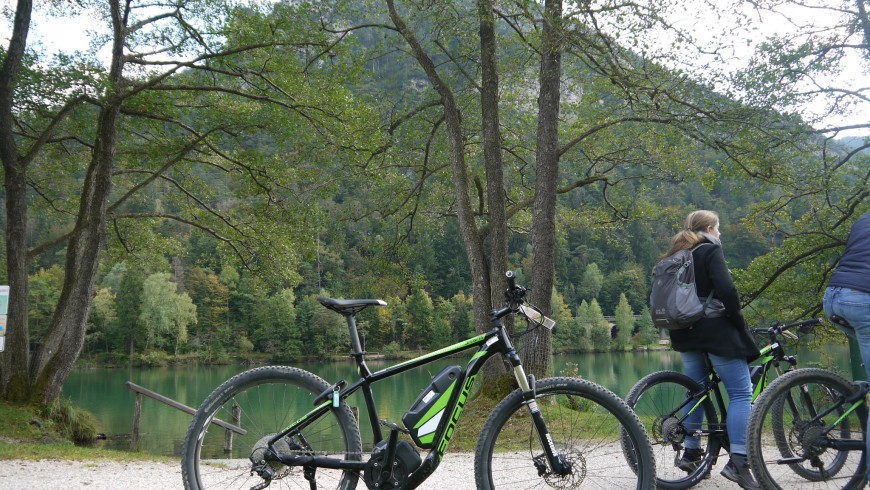 Salt for your wellness

Bad Reichenhall has a long therapeutic tradition: the benefits of salt will amaze you. The Alpensole saline sources will indeed be a blessing for your mental and physical health. It was the King of Bavaria Ludwig to want to transform the village in a thermal destination: since then emperors, nobles and wealthy men began to visit this typical village in Germany.

At the center of the Kurpark (curative park) a fountain and many trees, we visit the historic thermal baths and we taste the salt water that has the many beneficial effects.

In the evening, we stop at the Spa. After relaxing in the pool, we stop on the deckchair to inhale the vapors of salt breeze: doesn’t it seem a perfect moment? 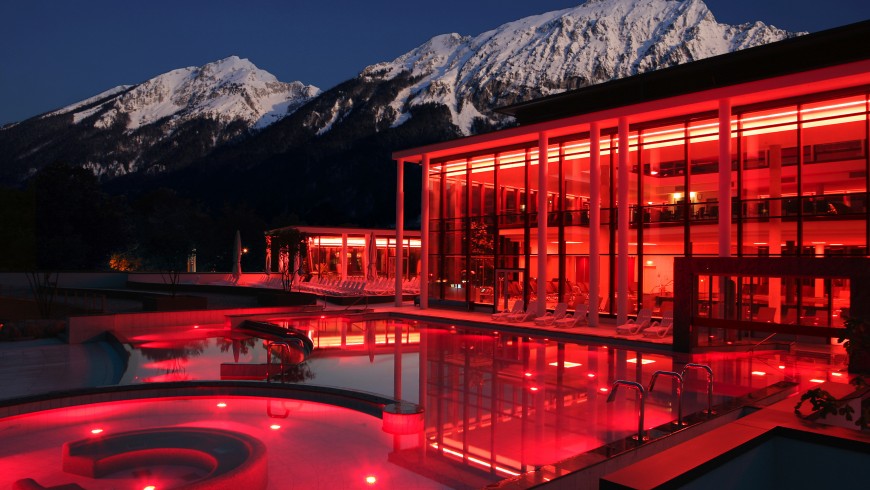 Get on the oldest cable car in the world 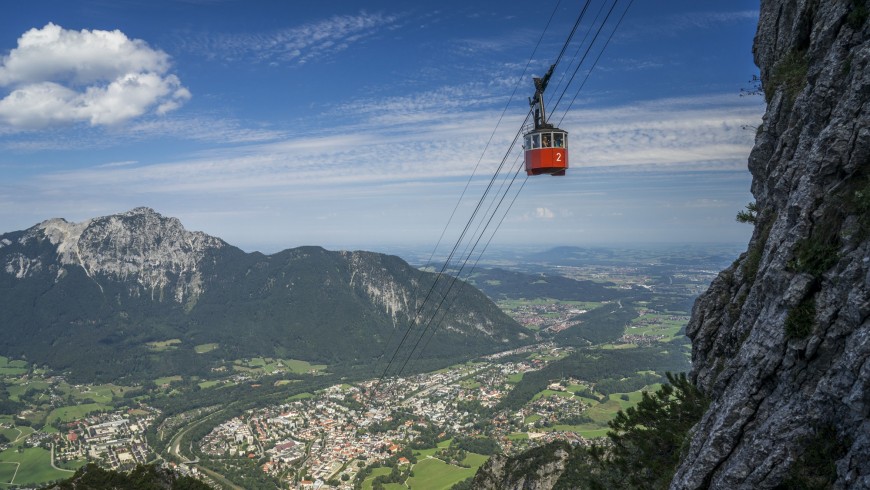 A 9-minute journey which is also a journey through time: the famous Predigtstuhlbahn cable car starts from Bad Reichenhall and arrive among magnificent mountains, at 1583 meters above sea level. The cable car has been active since July 1, 1928, making it the oldest cable car in the world.

Whatever the season is, the musical offerings of Bad Reichenhall will be rich and unmissable. Classical works, folk music, jazz concerts are interwoven in the city life, giving visitors incredible sound experiences. 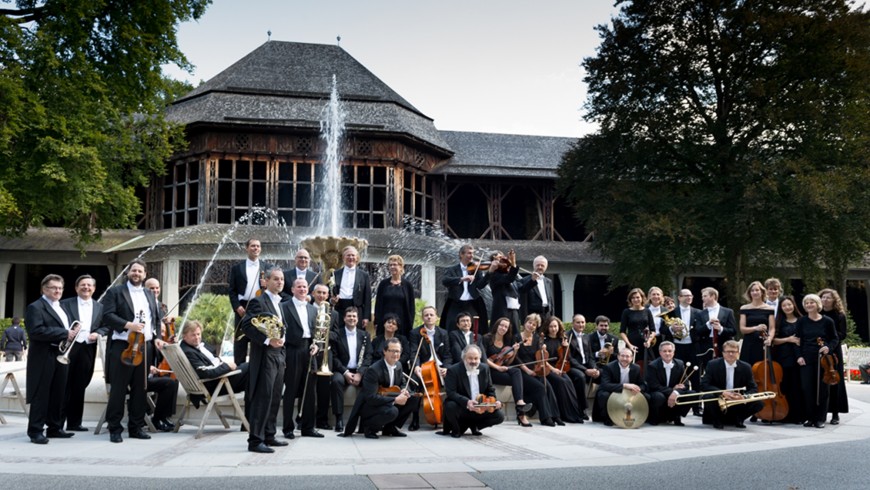 Visit the salt mine

A unique journey to discover the ancient salt mine of Bad Reichenhall, one of the most beautiful in the world, rebuilt after a fire by King Ludwig I. A journey through hundreds of years history of a unique and fascinating place: powerful  hydraulic wheels, beautiful spaces, the pumping system that has 100 years, to the fascinating underground salt caves. 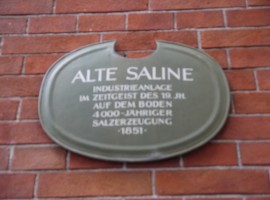 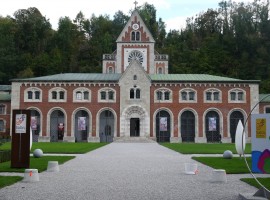 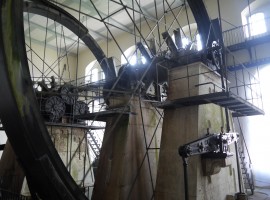 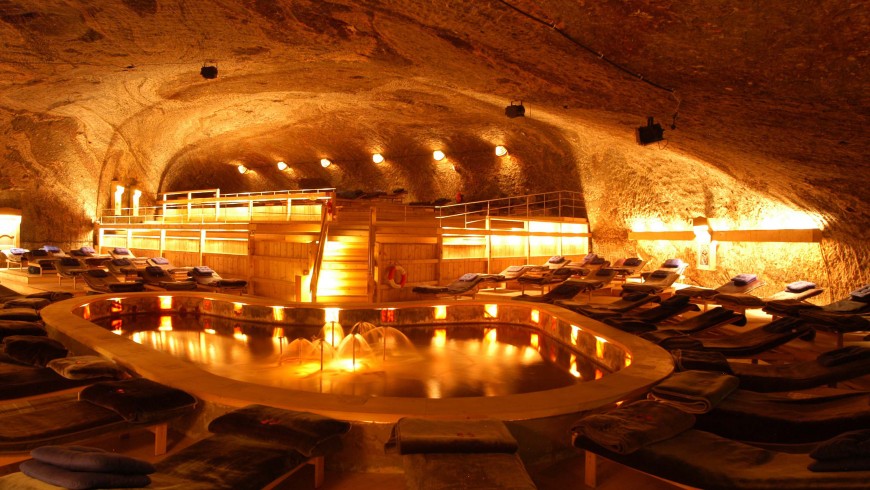 Car-free holidays in the Alps

The journey through Alpine Pearls starts from Moso in Val Passiria