We have valleys that I have never seen anywhere else. Identical to the landscapes of some old prints of Romanticism that you see them thinking, but it’s all fake, places like this do not exist. Instead there are: with the same loneliness, the same incredible cliffs half hidden by trees and bushes crumbling on the abyss and waterfalls, and a wayfarer on the path rather mysterious.
Certain less splendid than triumphant high valleys of the Dolomites surrounded of white rocks. But more enigmatic, intimate, secret. The valley of the Mis, for example, with its side valleys that run through a maze of mountains wild and without glory, where maybe yes or not a crazy man pass every three hundred years, not happy, if you like, perhaps somewhat arcigne and gloomy. And yet moving to the stories they tell, the air of others centuries, for loneliness comparable to that of the deserts.
(Dino Buzzati, italian writer) 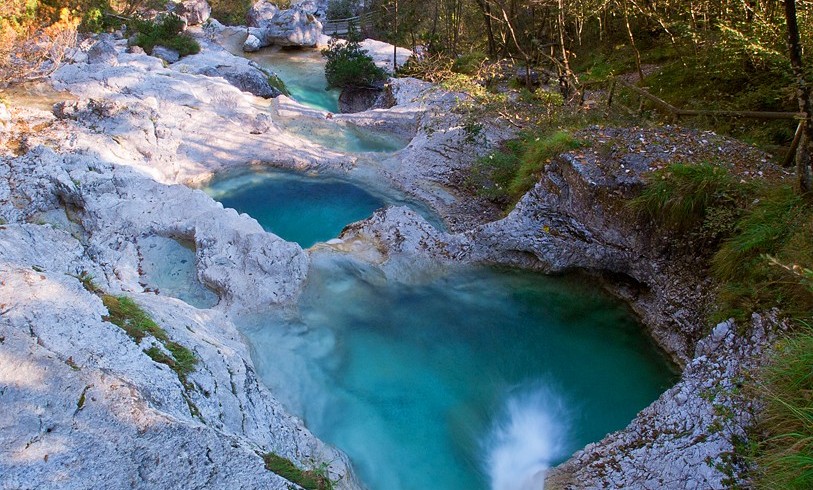 Loneliness comparable to that of the deserts, combined with moving stories of hard and rugged mountains, where the man who wants to rediscover himself sometimes must be lost. 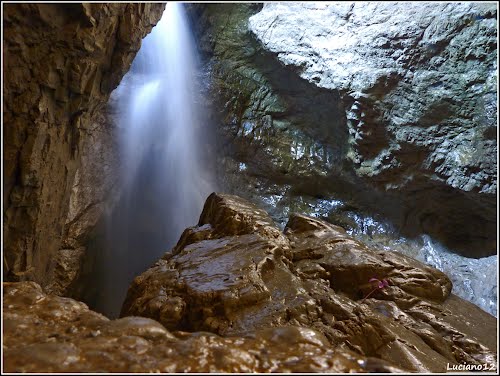 This is the route that we recommend for a relaxing autumn weekend, leaving at home the stress, haste, neurosis and technology.

For once, choose to luxuriously lose yourself in mountains where snow is not signed, to quote Mauro Corona, the discovery of one of the many beautiful places in Italy, often overlooked by most popular tourist routes.

For example, you reach the Valle del Mis, in the Dolomiti Bellunesi National Park, where after Sospirolo at Mas, passed the lake Mis, along an easy hike suitable also for children, in about half an hour you’ll land in the so-called Cadini del Brenton.

In front of them you will be literally amazed to see the fifteen pools, dug into the carbonate rocks throughout the centuries by the water of the river Brenton in an effort to reach the river Mis. The deepest is four meters high, but the majority are very low.

The first four are hidden from view and can only be reached by leaving the beaten path, while the other eleven can be seen staying on the path. 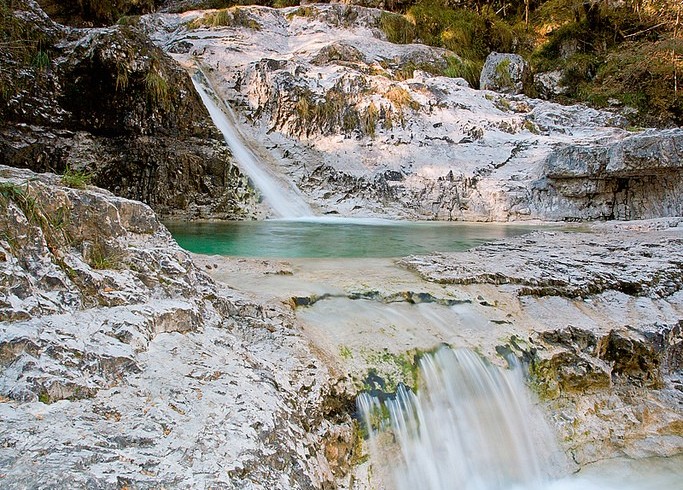 The water is turquoise, gently contained in the white calcareous rocks. Each pool is linked to the other through small waterfalls. The calm is absolute. You hear only the sound of water and sound of woods. 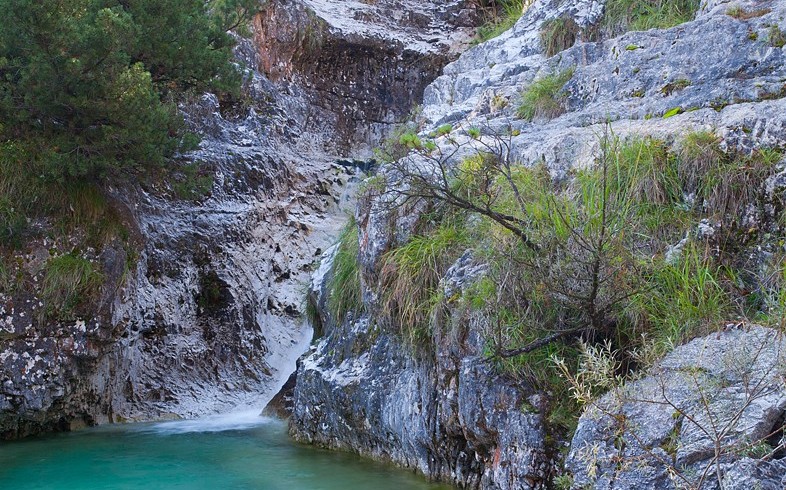 And then suddenly there comes to mind Dino Buzzati and its prints of Romanticism, and behold inside you feel to go back a bit of that so long sought peace and the fullness that touches you when nature blends with your soul. 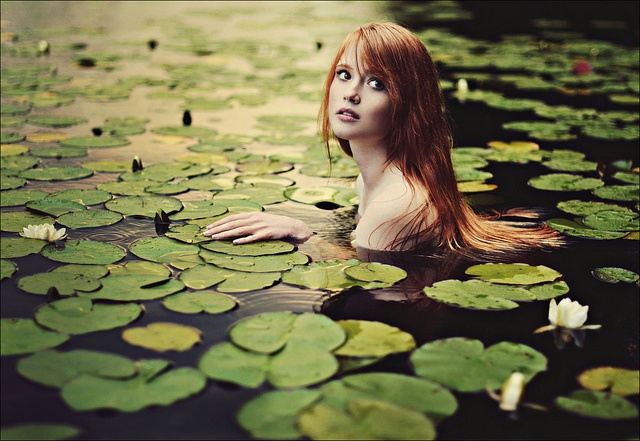 Back on the main road and then going up, you can reach the Soffia

Waterfall, where, among ravines and caverns and natural pools the homonymous river plunges into a deep gorge 12 meters behind which, according to legend, it’s possible to see the faces of the Anguane, Sirens, fabulous creatures bound to water similar to the nymphs, typical of alpine myths.

The place is really off the tourist roads, probably because of a lack of development and promotion of the territory. The atmosphere is enveloping and exciting, the water throws in the rocks of what we could call a canyon, constantly changes color according to the light that is able to capture in his impetuous waterfall.

When you descend physically tired but rested in the soul, you may decide to stop nearby St. Giustina (Belluno) at the Hostel Altanon – the house of Ecotourism in the Dolomites UNESCO, which is located always inside the Dolomiti Bellunesi National Park.

The hostel aims to promote the understanding and protection of the environmental resources of the territory and part of the Klima Dolomitilive Project, co-funded by the European Commission. If you pass after October 15th and if you are a group of friends its better that you call before, in order to agree a possible opening.

At the end of the weekend, when you will return to your everyday life, preserved inside of you a bit of silence, quiet and fullness without consuming, that for awhile you have grabbed in the woods and waters of Valle del Mis. Bring with you a little of purity and crystallinity of the waters of the natural pools of the Cadini del Brenton, imitate the firmness of the Dolomite rocks, hold in you the impetuosity and courage of the Soffia Waterfalls, radiate the magnificent foliage colors of the autumn trees. 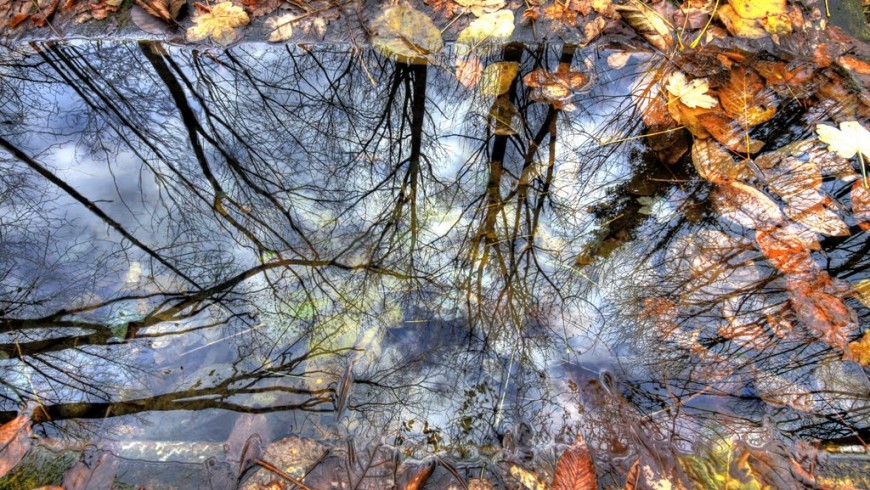 Foliage, where to gaze upon the Miracle of Autumn in Italy