One of the first thoughts that arise when we think about thermal spa it is definitely the price of the service, since various hot springs have been acquired by private companies that have built around exclusive factories and activities.

Not everyone knows that you shouldn’t necessarily face high costs to enjoy the benefits of thermal waters. In fact in Italy there are a lot of hot springs and this means that there are still many natural pools where anyone can dive freely or at prices more affordable if compared to private establishments.

We had already talked about 5 amazing natural hot springs in Italy, now we want to tell the other 12 thermal pools, one for each month of the year, from north to south of Italy, where everyone can enjoy spa service at very little price.

Let’s start with the 6 free spa (or with a very little price) in the area of Central Italy. Ready for a dip in the hot fumes?

Bagno Vignoni, in the county of Siena, it’s a small but very special village, because it has a huge pond of thermal water standing in its center. Since it is forbidden to swim in this waters for obvious reasons of civil decency, a special swimming pool has been opened to all those who want to soak in the hot springs, at the very end of the Sentiero dei Mulini, the road that leads to Bagno Vignoni. This path is very impressive because it’s surrounded by small channels that collect water from the springs.

The swimming area is not wide but considering that the flow of tourists is light, the quality of the bath is not affected, and there aren’t any services in the area, for a very natural experience. Here you can take advantage of sulphurous volcanic springs from sources around 50 degrees that reaches the basin of the pool through natural channels and waterfalls. Ideal for sufferers of arthritis, rheumatism and neuralgia.
The easiest way to discover the thermal baths of Bagno Vignoni is by car, following the signs to the town of San Quirico d’Orcia until you reach the junction that leads to the village. 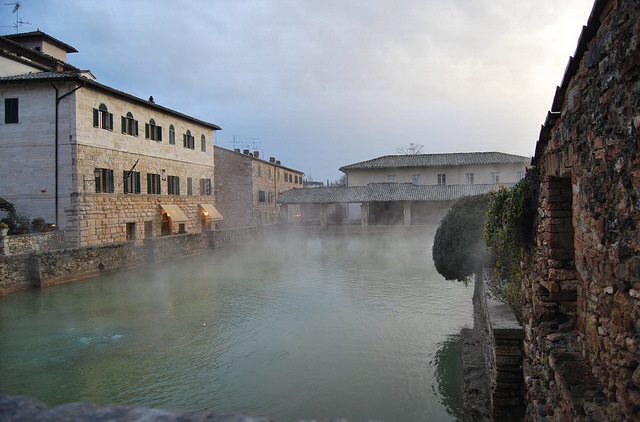 Another location near Siena where you can relax freely is the spa of San Casciano, at the base of Mount Cetona, where the ancient Romans built the pools of thermal water. And these same washrooms in the rock form the free spa with hot water at a temperature maintained at around 40 degrees, appreciable especially during fall.

A little farther there is also the privatized area with the establishment of San Casciano dei Bagni, but the free spa is already amazing because it’s large enough to ensure space for everyone with no time limits, and the confifuration of the area allows you to stop for a picnic or spend the afternoon sunbathing.

The waters of San Casciano are classified in the group of sulfate-magnesium-fluorinated -calcic, rich in minerals, that benefits both the respiratory system and the musculoskeletal system, also recommended in the gynecological field.

From Rome, we get to San Casciano along the A1 and exit at Chiusi-Chianciano, and following the signs that lead to the country. Coming from the north, along the A1, take the exit towards Orvieto and San Lorenzo Nuovo – Acquapendente, exit and continue for SS 2 Cassia towards Siena, arriving finally at the junction for Perugia and San Casciano dei Bagni. 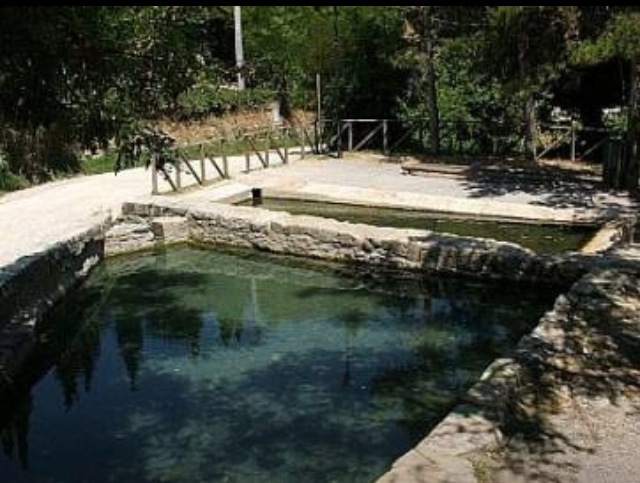 Another source in Tuscany is in Petriolo, near Grosseto. Here you have both the private thermal baths and the free, with several tanks that can accommodate a good number of people. The waters are rich in minerals and the strong presence of sulfur produces a more pronounced odour which is not always pleasant. A swim in the warm waters that flow to the source at 43 degrees is recommended for respiratory care and dermo-cosmetic treatments.
The baths of Petriolo are composed of multiple layers of basins bounded by stones and rocks, all surrounded by green woods of oak and chestnut trees, ideal to regenerate body and soul. Nearby there are facilities such as bed & breakfasts, cottages and inns features.
To achieve Petriolo by car, which is recommended to be able to move freely between the structures, coming from the North take the SS 223 towards Grosseto until Viadotto Farma. Coming from the south, take the Roma-Civitavecchia-Grosseto – Grosseto-SS output for Siena. 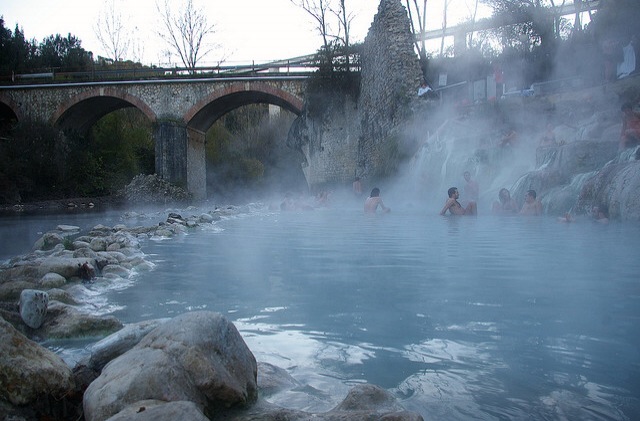 Free Spa in Petriolo, Tuscany, ph. by Podozoo via Flickr

In Latium, 4 km from Civitavecchia, there are the Thermae of Ficoncella, taking their name from a large fig tree still existing, situated on a hill nearby. In ancient times, the Etruscans built a town of which today there are archaeological remains, Aquae Tauri, right next to the source of these waters.

There are services such as the locker room and a bar, the baths are in fact managed by a company asking for a small contribution to keep the area clean and safe, and providing the outdoor area for camping and motorhome.

There are five ponds composing the spa of Ficoncella, where you can take baths and showers of hot sulphurous water devoid of smell that helps in skin diseases and wound healing, as well with joint and gastro-intestinal problems . The temperature in the tanks, always around 40 degrees, makes the baths accessible also in the cold period.

We suggest: Eco hotels near Viterbo

The Baths of San Sisto are located in the county of Viterbo, on the slopes of the Monti Cimini, and are also known as masses or puddles. This is an area very rich in thermal springs due to residual volcanic activity of the subsoil, in fact in the past the Romans built 14 spas: those of San Sisto were the Thermae of Paliano.

The spa area is managed by a private company so you have to pay a small entrance fee related to the purchase of the membership card of annual value, that then will allow you to enter as many times as you like and stay with no time limits , even during the night. There are services such as a locker room, a dining area, showers and a lawn where you can stay during the day at the spa: attention, however, because they do not allow camping and lighting fires.

The puddles of San Sisto are made ​​up of some tanks with water at different temperatures, not very large, and in fact it can happen to be crowded, especially during the summer. The carbon-suphate waters are ideal to cure respiratory disorders and skin diseases.
It is also allowed to dogs on a leash, just kept out of the water. The baths of San Sisto are located 8 km from Viterbo in the direction of Vetralia, easy to reach as located on the Via Cassia Sud, in Paliano destination.

We suggest: ecofriendly accommodations near Viterbo 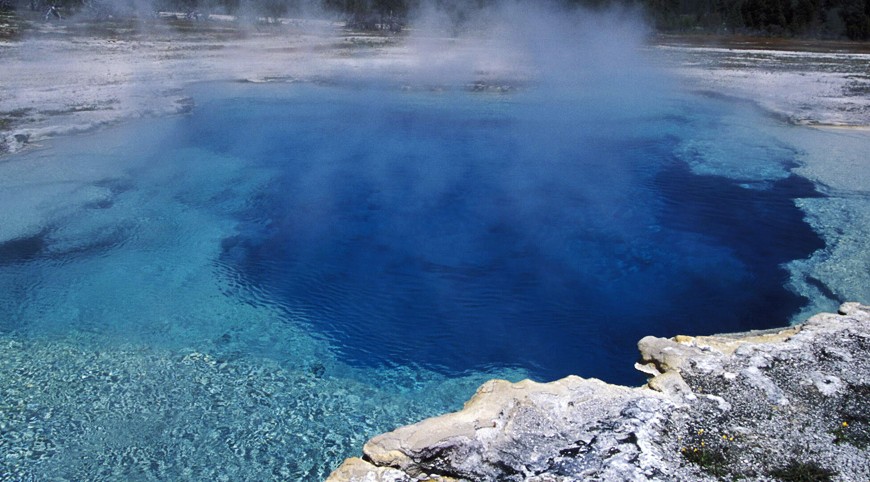 As already mentioned, Viterbo area is very rich in thermal springs, and there are still free spa, such as those of Piscine Carletti, fed by the same water of the most famous Thermae di Bulicame, which, however, now isn’t provided by enough water.

The spa of Piscine Carletti are formed by some tanks: the first three are the closest to the source and therefore hotter as the water flows at about 58 degrees, while the two distant tanks are more lukewarm. This water is classified in the sulfur-sulfate-bicarbonate-alkaline group, rich in trace elements and mineral salts, and because of its physicochemical properties it is advisable to consult your doctor before making the baths. The surrounding area is kept clean by the local authority, which has also taken steps to arrange a beautiful green area, guaranteeing free access to the spa, both day and night.

The free thermal spa of Piscine Carletti attract many people, also due to the ease in reaching the place:it can be reached by urban bus from Viterbo, in fact the stop it’s just a few meters away. Those arriving by car from the A1 Rome-Florence – exit Orte (or Attigliano) must follow the path SS Orte – Civitavecchia – Exit Viterbo Terme – go on to Tuscania and continue for about 3 km, then turn left before crossing with Strada Bagni.

We suggest: eco hotels and organic agritourisms near Viterbo 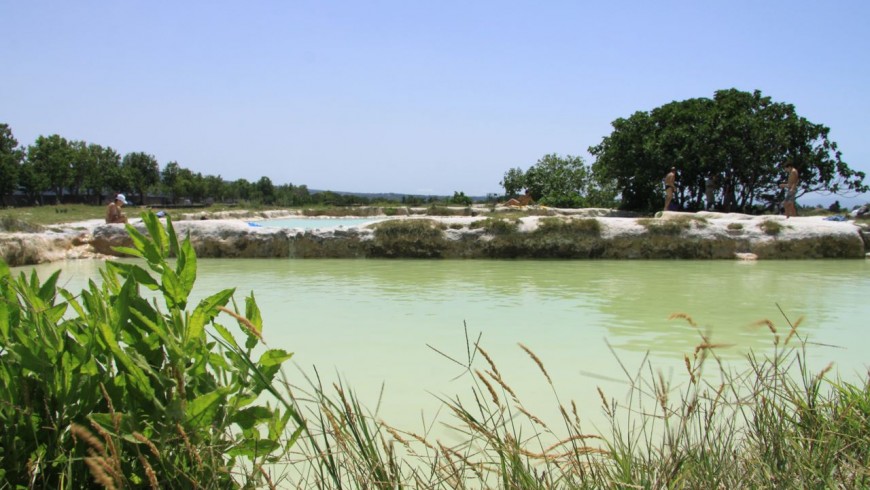 The natural thermal pools that Italy offers us do not end there. Follow us to discover  other amazing free hot springs in South Italy!

Diving in a Natural Pool, in Italy