Printing with the coffee grounds, cooking with the sun, driving the eco-friendly car in Lego bricks … discover 10 incredible green inventions!

In the world, there is someone that takes care so much of our planet that has invented things that help us to not destroy it. Their inventions maybe do not really improve our life by using them, but they will considerably improve the quality of our global life due to the fact that they are all inventions eco-sustainable. Let’s find out some of the most incredible green inventions:

This first green invention came up by a twenty years old Romanian boy, Raoul Oaid. He builds with LEGO bricks a car totally ecological, that works with compressed air. The car is really working, it goes at a maximum speed of about 16 m/h thanks to a propulsion system, which is equipped, consists of four orbital motors in their turn formed by 256 pistons. It took 20 months time to build this car and more than 500.000 pieces of Lego. Forty people financed the project with a total cost of 60.000 Dollars. Surely this car does not match a commercial project but realizes a dream of lots of, young and old, that playing with the Lego bricks and imaged to build a real car that does not make pollution and noise. 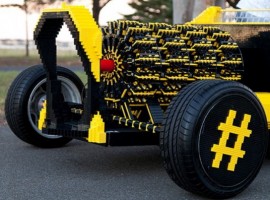 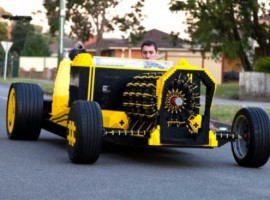 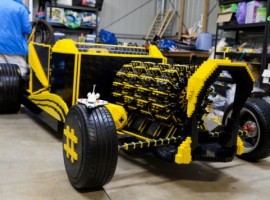 A new way to save money on the water bills it’s given by this ecological umbrella. This green invention allows collecting rainwater during your walk outside.

An upside-down umbrella invented in Japan that collects water by a small plastic tube that takes the water in a tank to hold under the arm…surely it’s not so comfortable to walk with a tank under the arm, but the idea it’s not so bad!

To cook without polluting it’s possible! With the invention of the solar cooker, instead, to use the dangerous and expensive gas cylinders or the electricity, it allows to cook, heat the water and make it drinkable thanks to the solar panels.

The making costs are around 5 €, it’s enough to have an umbrella (or a box) and the tin sheets to reflect the sun’s rays. Surely we don’t go to use it in a cloudy day, and it’s not suggested for all the type of cooking, but it’s a good way to cook in a “green” way in every sunny day! 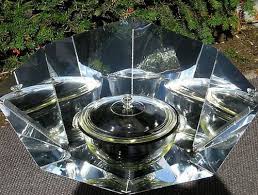 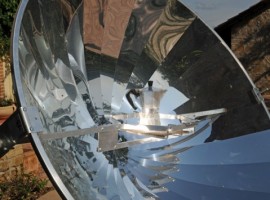 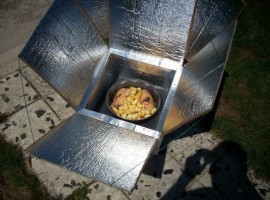 The clothes that recharge our cell phones? It’s not only fancy but an invention that comes from the ingenious of physicists of Wake Forest University (North Carolina -US). The clothes take advantage of the human warmth and the difference in heat that is created on the garment itself, transforming it into energy, so you can recharge an MP3 or 15% of the battery of a mobile phone. The future is really upon us, a greener future!

The Korean designer Jeon Hwan Ju has invented a printer that uses the residuals of coffee and tea instead of ink, thus saving oil and emissions of inkjet printers. Even the printer may be useful to the green and recycling of waste! 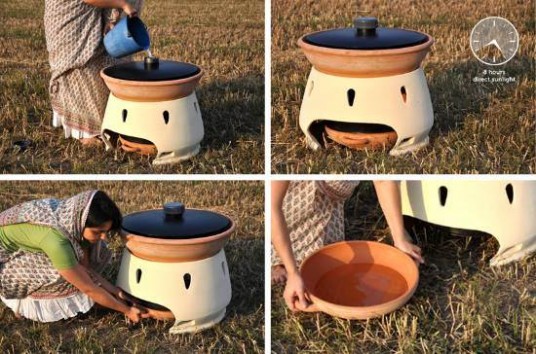 Maria Telkes, in 1920, when she was only twenty years old, invented a system of solar distillation that can make seawater drinkable. The system planned to pour salt water into a special container covered with a transparent glass sheet, which was to be exposed to the sun, so the sun’s rays could carry out his own water purified.
A graduated Italian student, Gabriele Diamanti, also has patented a similar system called solar desalination. This device can generate about 5 liters of freshwater per day. The system is called Eliodomestico and is similar to a Moka coffee machine upside down, where the upper part is filled with saltwater, which evaporates with solar energy and is pushed towards the bottom of the furnace through a capacitor to be then collected with a plate that is extracted from the bottom. Several families, especially for countries in trouble, can then have access to freshwater where before was not possible.
Finale, the University of Delf, in the Netherlands, has succeeded in a similar intent. Everything is based on the technology of windmills, In practice collect seawater and exerting a pressure of 60 bar releasing salt, making water drinkable.
Maybe one day, in the world, there will be no more problems with drinkable water.

The ecological battery of the future will also be eatable thanks to the ink of the sepia. The change, in the area of sustainable energy, has arrived thanks to the research of U.S. Scientist Christopher Bettinger to Carnegie Mellon University (Pittsburgh), through with it was possible to build new battery-based pigments that are, in fact, in sepia.
The new battery label will be able to offer a number of interesting solutions in the field of environmental and energy sustainability. On the one hand, the biological absorption, the edible battery will in fact lessen the impact derived from the disposal of conventional batteries. The other aspect concerns the possibility of applying the new battery to the latest generation of absorbable medical devices, such as those for drug delivery or those for cardiovascular stimulation.
The new battery edible cuttlefish ink, for now, is still a prototype and does not have the same performance as lithium-ion batteries, but the research is still only the beginning.

Alfredo Moser, a Brazilian, invented the light bulb that works without electricity. Just a two-liter plastic bottle filled with water and bleach and each may have its light, free.
The Solar Bottle Bulb uses the refraction of sunlight through the water, The bleach is used to clean and maintain the transparent bottle.
Making a hole into the roof with a drill, you have to push the bottle into the hole and secure it with polyester resin.
The energy produced depends on the intensity of sunlight and varies from 40 to 60 watts of the lamp.
It is an entirely ecological invention – says the BBC – is illuminating the world. It is already in use nearly a million homes, mostly cabins, and homes in the suburbs of poor people. 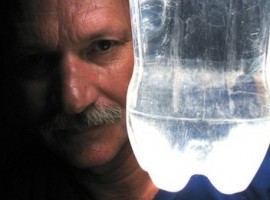 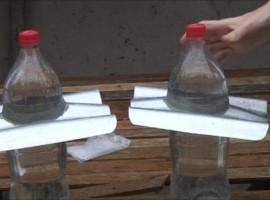 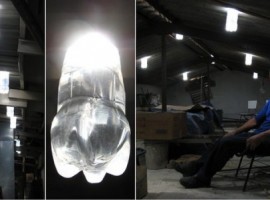 9) Heating without gas or energy

Heat a room without consuming electricity or gas is the invention of the British journalist Dylan Winter, who has designed a do-it-yourself system that works with four candles, two jars of clay, a metal tray. Place the candles lit on the metal tray, cover the candles with the first clay pot, the smallest one, to be placed upside down.

Cover, using any object that could serve as a stopper, the hole above the smaller pot. Place the second clay pot, the larger one over the smaller one.
This system, in addition to being super eco-friendly, it saves considerably on your heating bill… try it!

Elif Beligin, 16 years old from Istanbul, won the 2013 Science in Action Award for its beautiful idea. He has developed a chemical process for turning banana peels into a resistant bioplastic, hoping to help reduce dependence on oil.
Once again, the ideas for improving the planet turning our gaze to sustainable solutions are proposed by the youngest.
Elif paused to reflect on the fact that the fruit is naturally wrapped in a wrapper, that provides all the protection it needs, characterized by its flexibility and strength.

The student explained on the official website of the competition:

“My project is about using banana peels for the production of bioplastics in place of traditional petroleum-based plastic”.

Plastic contains petroleum and these cause environmental pollution, Substituting this material with an eco-friendly product from banana peels, we can not do anything but good to our planet.

Let us assume that these inventions if used daily by everyone, would help reducing fuel consumption and pollution. It is not easy to change their habits, but we believe that we can try to take care of our planet as well as it takes care of us.

We are waiting for new ecological inventions, and why not, your new green inventions! 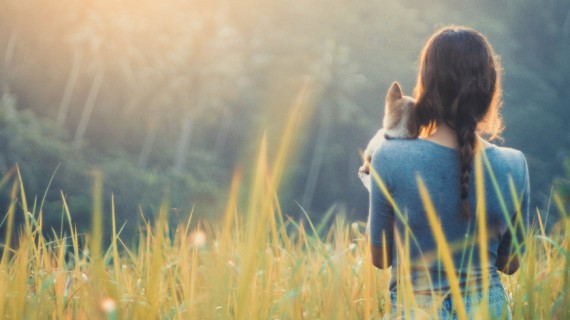 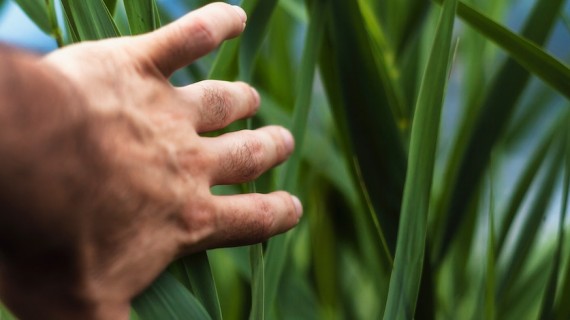 5 inspiring stories to change life in a green way 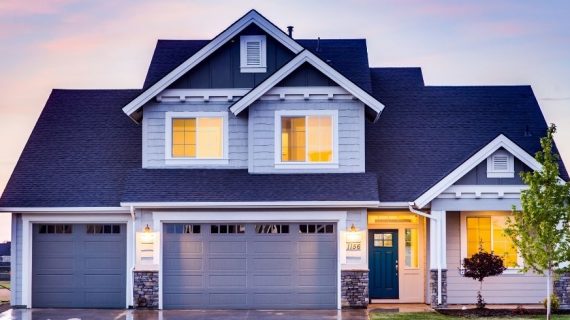 6 Green Home Improvements That Can Increase Its Resale Value

Are you thinking about selling your house in the near future? If your answer is yes, then you’ve come to the right place! Getting the best deal is not an easy thing to do, but there are some effective ways to increase the value of your property. You need to remember, though, that not every […]