The price kissed the princess and they lived happily ever after in an enchanted castle guarded by a spitfire dragon…well maybe this is not the correct follow up of the old fairy tales but “and they lived happily ever after” is the right one, isn’t it?
We have been listening to this happy end so many times at the end of a bedtime story that each time we see the shape of a castle far on the horizon we cannot but hear this lovely lullaby resounding in our ears.
And almost immediately the hard reality hits us: princes and princesses are far away heroes unlikely to step today’s roads. New princes and princesses have given up the royal garments and they no longer tour their properties in a two white horse carriage with gold gilded armoured soldiers: they live everyday life and they sometime play as special guests in kitsch TV shows or they become the laughing stocks in awarded movies such as “La Dolce Vita” and the recently Golden Globe awarded “La Grande Bellezza” or if they are smart enough they “turn their past into their gold future” and offer some of us the opportunity to leave a dream…though just for one night.

This is the case of the 5 magical castles herewith: you may not be a supporter of royalties but the charm of a night in a place where century old families were born, live, loved and died is irresistible.

Castle of Scipione of Marchesi Pallavicino in Salsomaggiore Terme (Piacenza): The Marquis who refused the Title of Prince.

So the story goes: the Marquis of Pallavicino are together with the Hannover and the Malaspina families’ one of the noble families with longest tradition in Europe. Their origins date back to 1025 and their castle was built on the ruins of Lucius Cornelius Scipio Africanus Villa.
In 1636 the Emperor Ferdinand offered them the “Title of Prince” and the Marquis of Pallavicino disdainfully refused it loyal to the title of”Marquis Pallavicino” he had always had.
The marquis ‘strength and fierceness can still be sensed through the massive walls of this ancient fortress and the luxurious 2 suites where guests can stay overnight:
Blue Suite known as the Watchtower
Green Suite located behind where the drawbridge was once located. 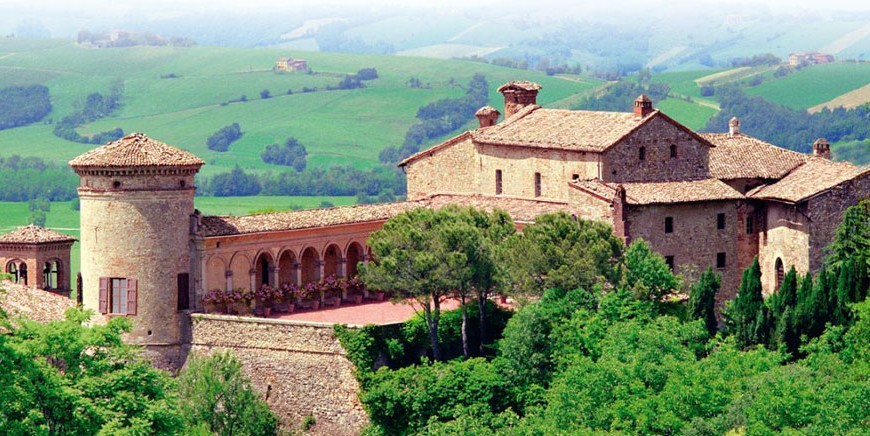 The original stones of this XIV century castle tell us the story of a land ravaged by riots, upheavals, battles and destructions until when the area was finally assigned to the Spoleto feud in 1520.
The structure is now part of what we could call a “widespread hotel” that is a hotel whose rooms are not located in a unique building or property but in different locations through the village.
Torre della Botonta rooms are named after natural materials such as “The canopy room” (the hemp room) or “The silk room”: experience a stay at “Torre della Botonta” and feel like the Nordic royalties who do their best to look so common and do not forget to go green as an example to their citizens…eco chic
Wishing for a royal green stopover? Check at Torre della Botonta Castle 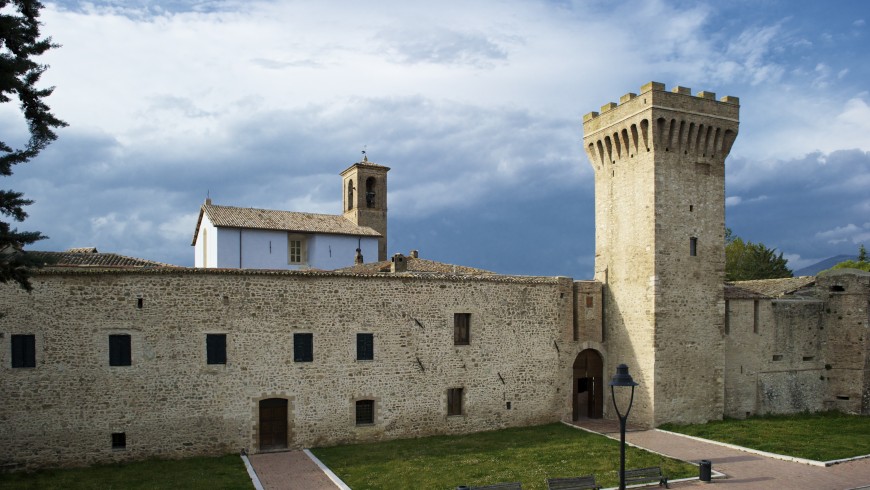 Built in 1062 by the Normans who conquered Sicily, the castle was then property of the Arabians , the Svevi and on and on till the 1000 soldiers headed by General Giuseppe Garibaldi, the “Garibaldini”, took the castle rooms to set their offices.
The castle has undergone a complete restoration works respecting the original Norman structure and guests can stay in one of the 12 rooms (9 regular rooms and 3 juniorsuites), enjoy modern technology (wifi, satellite TV, A/C system, etc) and the old culinary traditional specialties such as the pork leg cooked for 8 hours over wood fire or the veal steaks over a mushrooms and basil bed. Hard enough to find the same tastes somewhere else.
Find out more on the green concept inspiring the “Castello di Petralia” guest philosopy at Petralia Castle 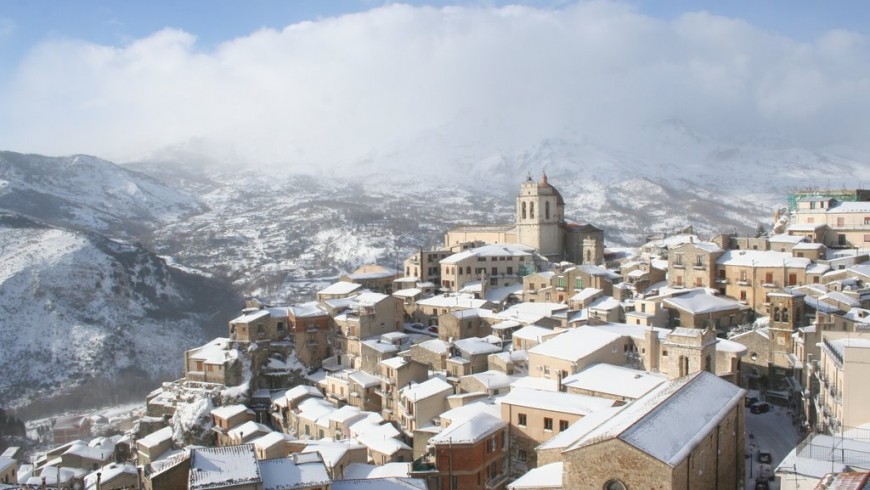 Castle of Zorzino in Riva Di Solto (Bergamo) :up where the eagles belong…maybe not that high!

The Castle was built in the Middle Ages as a fortress overlooking the Iseo Lake at the feet of the Prealpi mountains. Beautifully surrounded by green fields and woods, the Castle has been restored according to the latest bioarchitectural principles and has been awarded the Ecolabel “Legambiente Turismo”, a European certificate for properties supporting low impact and sustainable practices.
On top of feeling the lady or lord of the castle for one day, you may even feel the thrill of being the Lady of the Lake of Iseo as the actual Castle owners rent their sailing boat with skipper services for a lake excursion. Can you really dream of a better place for a spring week end?

Castello di Compiano in Compiano (Parma): have a panigaccio and a well done steak up at the castle!

And here it is the typical example of “turning wood into gold”: the old castle in the heart of the Parma Apenines has been converted into a glamorous Relais featuring everything you may look for:
3 Museums for curious minds (the Castle Museums)
1 Restaurant or actually a panigacceria, panigaccio being a light bread similar to a more common “piadina” made of wheat, water and salt and baked on a terracotta dish on fire (Panigaccieria).
And for real hungry ones, the savory steaks of the locally grown cattle.
1 Convention centre for unconventional meetings
1 Dreamlike location for your fairy tale wedding
1 Day care center for your kids
Check details at Compiano Castle 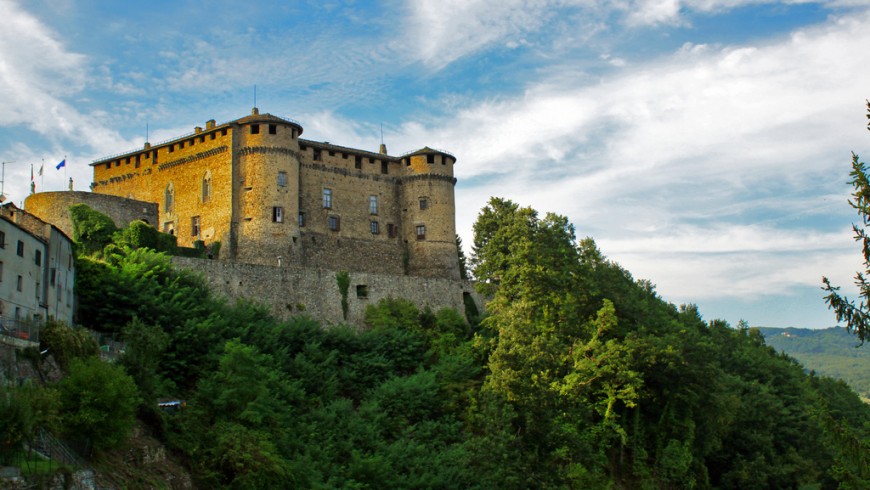 And if you do not have a fully day and night but you are after a unique experience and share some memorable time with your dearest ones, you can’t but go and visit:

Castle of Miramare, in Trieste: where the Austria Hungarian Empress Sissi spent her holidays

Built by Maximilian of Augsburg to make it his home, the Castle welcomed many noble and famous guests such as the Empress Elisabeth of Austria, the legendary Sissi.
It became the solitary “buen retiro” of Charlotte of Augsburg. Charlotte lived there by herself the rest of her life when Maximilian was executed by a local upheaval in Mexico.
Maximilian, a former Marine official, had asked the architect to have a palace reminding him of his naval life. The architect designed a castle which actually reminds the prow of a vessel.
This is why the Castle of Miramare enjoys a breathtaking view hanging on a cliff over the Gulf of Trieste. 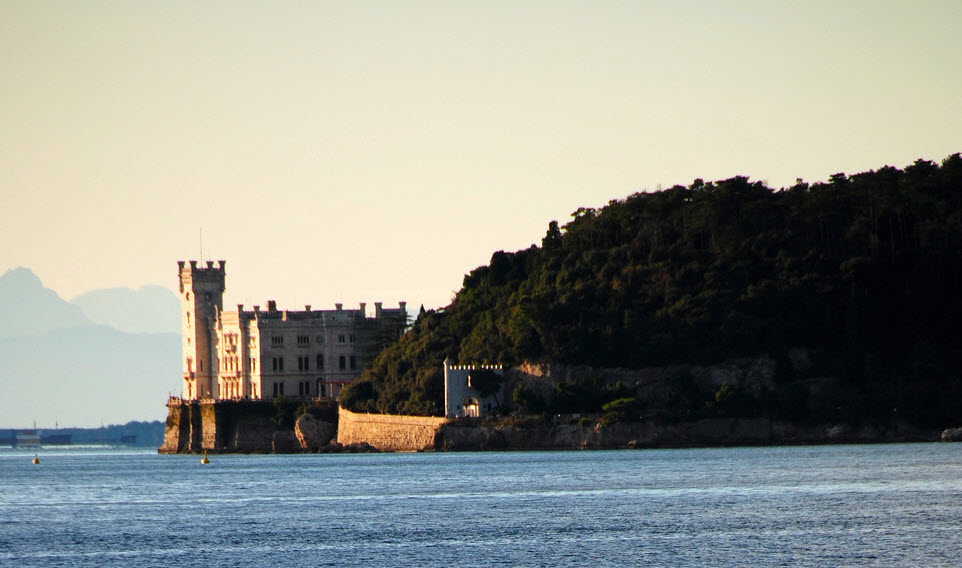 Castle of Miramare Trieste by Tony Hammond via Flickr

Castle of Fenis in Fenis, Aosta: from castle to barn and back to castle- the destiny of an old important “messieur”

Built in approx. 1240 by the Viscount of Aosta, this gigantic pentagonal based building became the war chest of a territorial fight and was sadly doomed to be dismissed and it was even finally turned into a barn.
The castle was restored by his owner the architect Mr Alfredo d’Andrare in 1895 and in a later on restoration campaign the castle got its current appearance. The rooms were also provided with wood period furniture. Your kids will adore the “armory selection” and the art lovers will admire the little chapel frescoed by Giacomo Jaquerio.
Wishing to arrange your visit? Have a look first at Castle of Fenis, Aosta 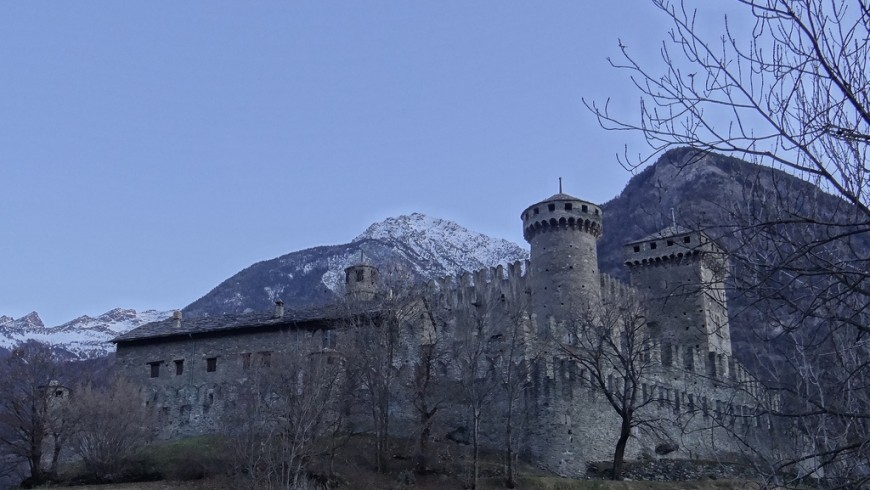 Castle Scaligero in Sirmione, Lake of Garda: a Castle over the lake

Quite an exception in the Italian castle catalogue, this massive castle lies on the shore of the Lake of Garda at the entrance of the picturesque village of Sirmione.
Sirmione has been a very well known and well appreciated vacation place since the Roman ages: the poet Catullo used to have his villa at the top of the hill in the centre of the village and the divine Maria Callas spent her holidays and weekends here when living with his Italian husband, Mr Meneghini
For more details: Castle Scaligero in Sirmione 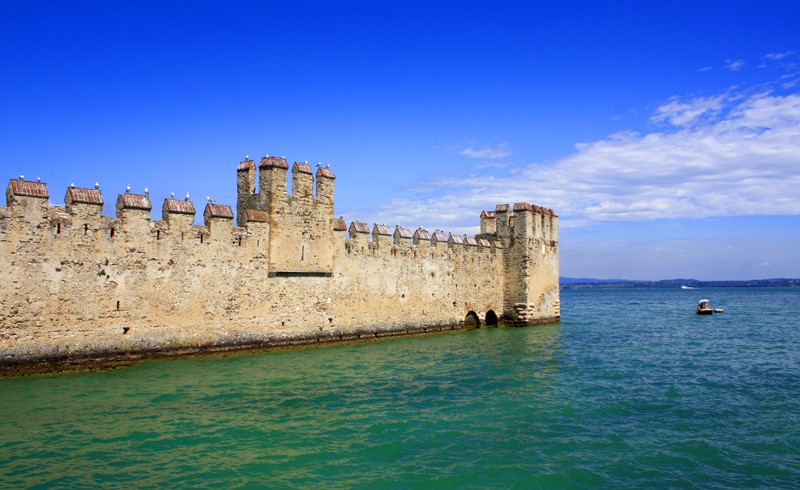 Castle of the Mount in Andria surrounding : where the eagle loved to fly and …rest

Never heard of Frederik II of Svevia?  Well, you have lost an occasion to fall in love with history and South of Italy. Frederik II was the son of Costance of Altavilla, heiress of the Norman Empire in Sicily and South of Italy and of the son of Frederick Redbeard. Grown up and educated at the Pope court, he then became his fierce enemy.
Frederik II spoke 6 languages fluently, was an avid scholar and what the French will call a “bon vivant”.
The castle dates back to the XIII century according to documents and due to its relatively small size it is believed it was meant to be a hunting lodge. Yet its octagonal structure, its position, the legends around Frederik II lead to think the castle may have had some super natural powers and relevance.
The Castle of the Mount is one of the Unesco World Heritage properties since 1996.
Curiosity 1: Doxorubicin, a chemical element in much chemotherapy comes from the strain of a bacterioum found in the soil around the castle
Curiosity 2: the Castle of the Mount can be seen on one of the side of the 1€ Italian coin 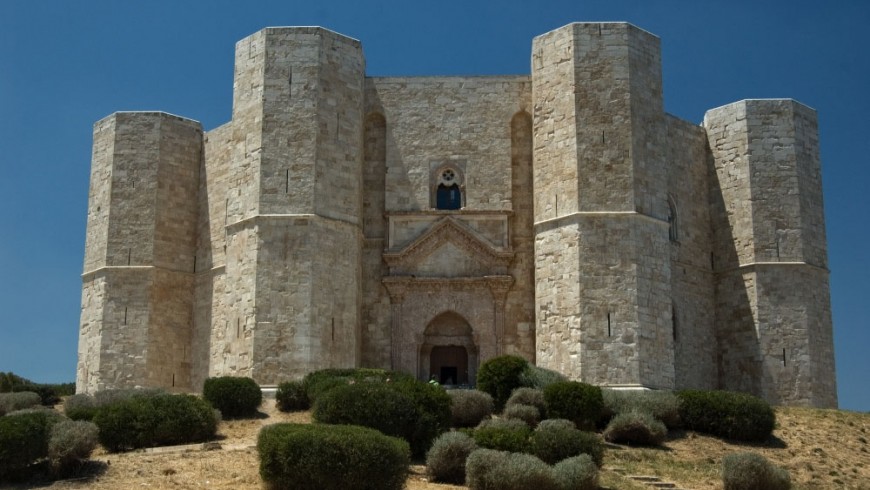 Castle of the Mount in Andria surrounding by Paolo via Flickr

Castle of Ferrara in Ferrara: will you lock your brother in your castle prison for a lifetime? Well, the Italian Alfonso I d’Este did

Right in the city center and surrounded by the defensive walls and moat, the castle was built and readapted to be first a fortress and later on a Renaissance villa for the glory of the Este family and the pleasure of the world famous Lucrecia Borgia, beloved wife of the Duke Alfonso I.  And yet the locals remember it especially for the sad story of Don Giulio, the brothers of the Duke Alfonso I: Giulio and Ippolito, bothers of Alfonso I, both fell in love with Angela Borgia, the cousin of the beautiful Lucrecia Borgia.
Ippolito sentenced therefore Giulio to death but the sentence was not executed. Giulio was beaten up but he survived. He lost nonetheless the use of one eye. From that moments on, Giulio could not but think how to revenge. His conspirator was found out and he was sentenced to death imprisonment in the dungeon of the castle. He was graced in 1559 after 53 years of imprisonment.
Can’t wait to see Don Giulio’s prisons? Castle of Ferrara 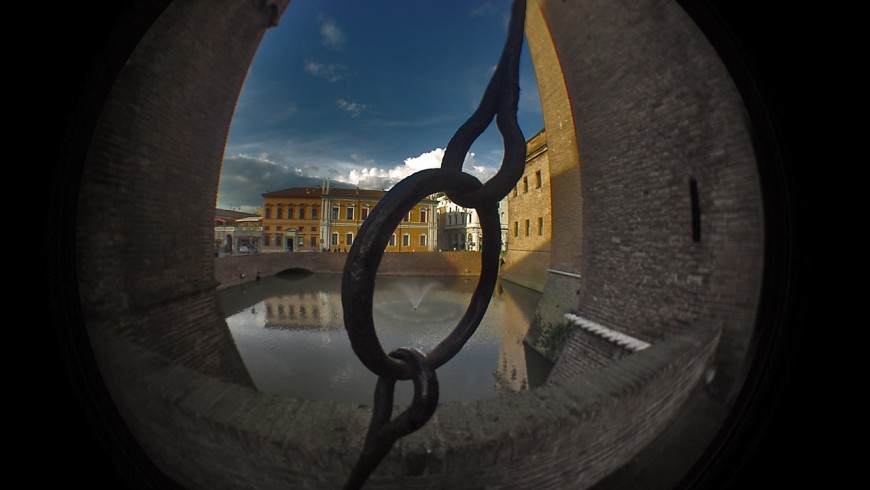 Castle of Frassinello, for a magical holiday in Monferrato

In the hills of Monferrato, in a picturesque corner this beautiful castle stands, surrounded by an amazing secular park. Here, every weekend becomes a dream to live, so that the location is also often used for weddings. The dwelling was carved into the tuff more than 1000 years ago, giving it a fairytale charm. The first news we have of the castle date back to the eleventh century when it was described as a defensive fortress. It was manorial castle, with, beside the military function, administrative functions, with a court subject to its protection. For centuries, the castle was then owned by the House of Nemours, a family of which little is known, between doubt and legends.

The castle interiors are amazing and romantic. During your stay you can also arrange guided tours and tastings of wines and local produce.

Info and booking: Castle of Frassinello 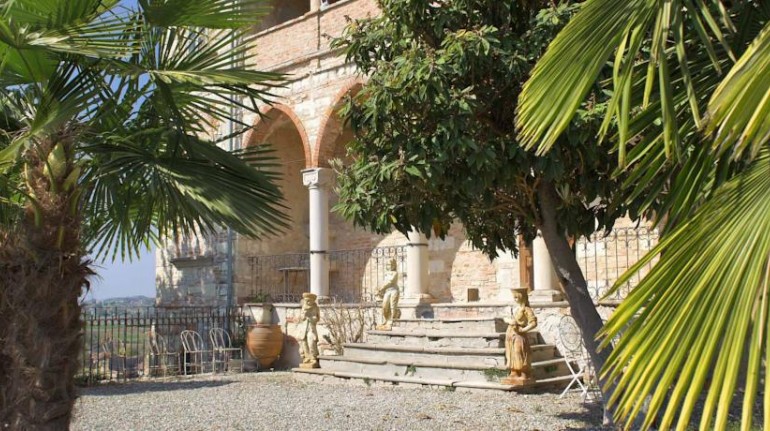 More castles for your visits: Castles in Italy