This fascinating residence of the 15th century arises abothe the hills of Parma, fiftheen minutes south from the emilian city. Torrechiara castle is one of the well preserved buildings of the epoque. Initially wal builded as a defence strutrure and then as a residence of the count Pier Maria 2nd de’ Rossi and his lover Bianca Pellegrini, to wich was dedicated the beautiful Golden Room, the most suggestive and fantastic zone of the whole castle. 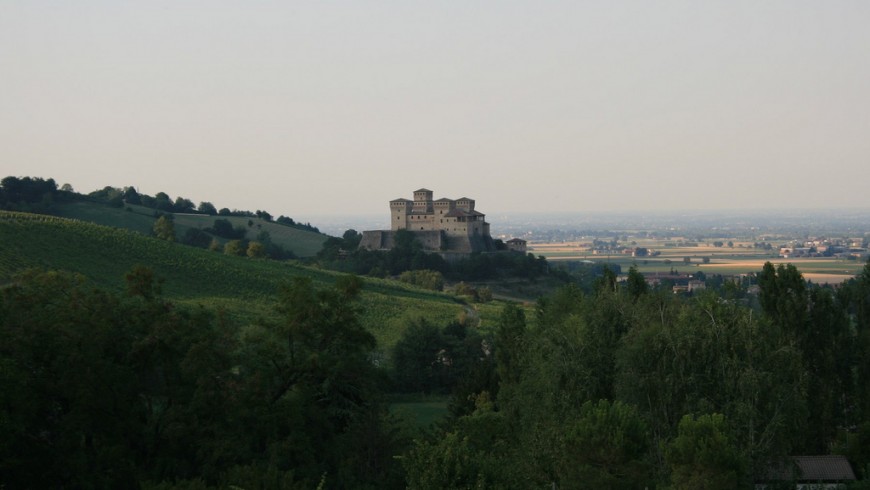 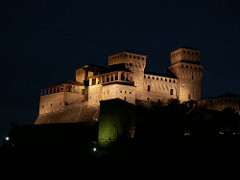 Torrechiara by night, photo by Hellis Reverberi, via flickr 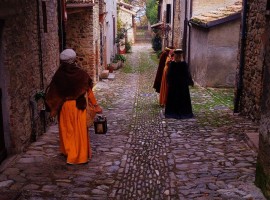 The hamlet around Torrechiara Castle, photo by Davide Morante, via flickr

The hills and the vineyards around the castle, photo by Hellis Reverberi, via flickr

And this is not all! The fief around gives the impression to be gone back to the past, in an epoque of dances, banquets and runs among the fascinating alleys of a timeless town.

Walked into the castle, 6 must see beauties

1. Saint Nicomede church, decorated with the beautiful frescoes of Cesare Baglone (1525-1590), a cloudy sky with birds.

2. Jupiter’s room, frescoed by Baglione. The inside is decorated with the frescoes of flemish inspiration that show Jupiter and some angels.

3. The landscape room with a frescoed roof of angels an female figures taht move in a naturalistic scenery.

4. The kitchen where are still visible the sink, a big fireplace and a small food warmer. On the northern side there are the cupboards. Outstide there’s a garden.

5. The Aurora’s room, the Afternoon’s room and the Vesper’s room. The rooms are similar for the dimension and the artistic impact, frescoed by Baglione too: birds flight in a cloudy sky, a landscape between reality and fantasy with mithological scenes.

6. The Golden Room, the most famous room inside the castle. It was the bedroom of Pier Maria Ross and it was frescoed by the painter Benedetto Bembo in 1452. The room was also used as a den. 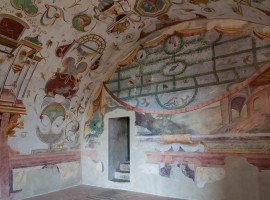 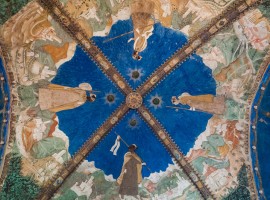 The golden room, photo by Jaqueline Poggi, via Flickr

A legend and two goodies about the castle

It’s certainly the most spectacular castle, completley well preserved and rich of atmospheres of the province of Parma. For this reason it has been uses as a cinematographic set of Ladyhawke by Richard Donner.

Le legend tells that in Torrechiara castle, during the fullmoon night, when the fog envelop the castle, a ghost of a beautiful dutchess appears, builded alive behind a wall by the husband, and she goes around the manor offering passioned kisses to the men she meets.

The name of the castle, Torrechiara, comes from the verb “torchiare” (to grill) something with a press, infact the territory around is full of vineyards and the fortress was the place where people stored the wine. Upon a time the hills of Torrechiara were rich of vineyards and olive trees from wich they extracted the oil.

Accomodations in Torrechiara and around:

The hills around Torrechiara Castle, photo by Hellis Reverberi, via flickr

Among the hills in the south of Parma there are many possibilities of ecological stay immerged in the Nature. Biological farms, b&b surrounded by the woods, holidays houses in small stone hamlets. Here there are:

BB Cancabaia Parma is located in a 1600 court, 15 minutes far from Parma and 5 from Torrechiara castle. The guests can enjoy the familiar hospitality snugled by the country air. This b&b is very loved for its rich breakfast sweet and salted with homemade pies and typical tastes.

B&B La Corte di Woodly, a familiar hospitality in an ancient stone hamlet with a 17th century tower with a coastline on the Lesignano de Bagni hills, 5 minutes from Torrechiara castle. Each morning the rich breakfast composed of coffee, cereals, bread, honey and homemade custard. Fresh fruit is part of the menu and it comes from the nearest farms.

B&B Il richiamo del bosco is a home immerged in a 1100 hectares wood, in the heart of Boschi di Carrega (Carrega’s Woods), 20 minutes from the castle. Ecological architecture and contemporanean creativity for a no ordinary b&b.

What to see nearby:

Take advantage of this sightseed to the Castle of Torrechiara an discover the nearby too!
From Busseto, the birthplace of Giuseppe Verdi, to the wonderful Fontanellato Castle with its forness still surrounded by a ditch full of water, here there are 6 thing you won’t miss:

About half an hour fro the city you will reach Langhirano, the kingdom of Prosciuto Crudo di Parma (Parma row ham). Inside the ex Foro Boario you can visit the museum dedicated to the sweet of Parma and to the pork butcher art. Tastings added.

On the way to Appenninoes you will run into the city of Felino. If you have tried its salami before, visit the museum! It is hosted inside the

In the middle of the little medieval hamlet of Fontanellato rises Sanvitale Fortress, surounded by a great ditch of water. Inside, the small room frescoed by Parmigianino during the 1500s, a work of art of the italian manneism. 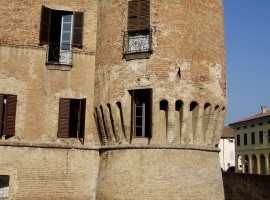 The fortress is located in San Secondo Pamense, few kilometres from Fontanellato. This town is also famous for Spalla Cotta, a precious cold cut preferably consumed hot and accompained by the typical “torta fritta”, a thin browse of flour, pig fat and yeast fried inside a boiling oil pot.

Welcome to the capital of Culatello! The Culatello di Zibello was born here and between the end of may and thebegin of june there are the celebrations of this cold cut. Each year, the Festa del Culatello (Culatello’s Party) attracts thousand visitors from allover the North of Italy. But if you want to taste the best Culatello of the world have a breack at Antica Corte Pallavicina: worth it.

Have you ever visited Torrechiara Castle? Tell us your best experiences!

10 unforgettable parks where spend a romantic night in Italy

The Superheroes of Green Hospitality