Overtourism: one of the words that people use most in recent years. In effect, more and more often, tourist destinations suffer from overtourism, tourism overcrowding. Places that everyone wants to see because they are “famous”. Movie scenes shot in locations (such as Lake Braies) that now attract hordes of tourists looking for a short trip. Simply, they stop the time for a selfie and then leave for the next famous stage. This type of mass tourism causes pollution, the devastation of nature and distress of local populations. Let’s see in detail what is overtourism, what are its causes, what are the consequences, and what can be done to avoid it. 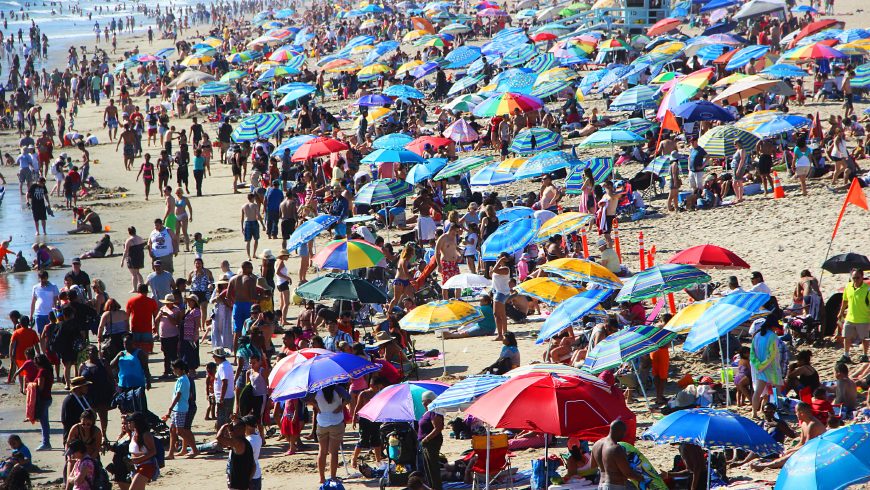 Overtourism is a neologism that indicates the overcrowding of tourists on a holiday destination. The term was first inserted in the Oxford dictionary in 2018 and nominated as the year’s word. Overtourism, literally “too much tourism”, is a complex phenomenon that we should analyze from various points of view. In essence, we could sum up the concept in one question. Is this place affected by the presence of more tourists than the place and the inhabitants can support?

When it comes to natural tourist destinations, tourism must respect flora, fauna, and microclimate. When the destination is a city, tourism must primarily respect residents, as well as local culture and archaeological sites. The latter in particular are small microcosms blocked in time that tourism should protect. If this doesn’t happen, we talk about overtourism, or unsustainable tourism for the place, for nature, for the people who live there. 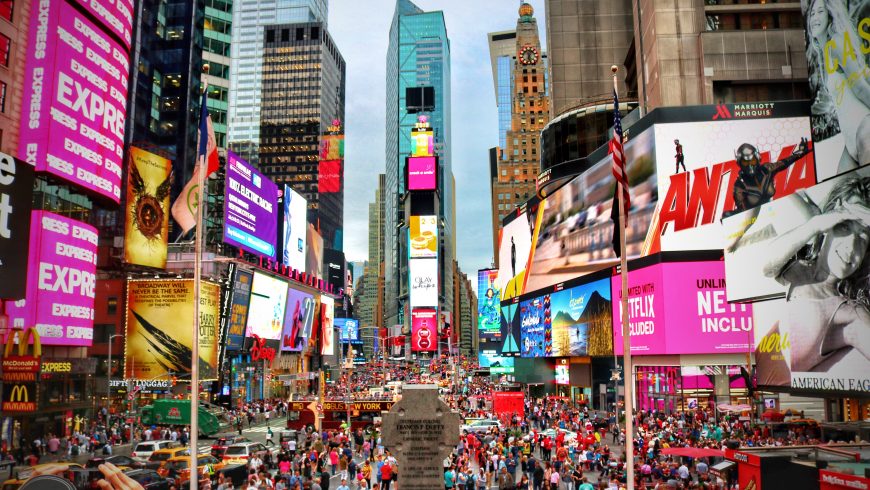 The crowd in Time Square, photo by Jorge Fernández Salas on Unsplash

The Causes of overtourism

More than 1.4 billion people are moving around the world every year, and they are growing at an exponential rate. The World Tourism Organisation predicts that by 2030 the international flow of tourists will exceed 2 billion. This very high number of people focus on a few tourist destinations in the world, which suffer from the excessive presence of tourists. The causes of too much tourism are many. From the famous films that make tourist destinations famous to the ease with which you can reach any corner of the world. Also, we can name the cruises that bring large quantities around the seas. We talked about cruises and their environmental impact in this article. 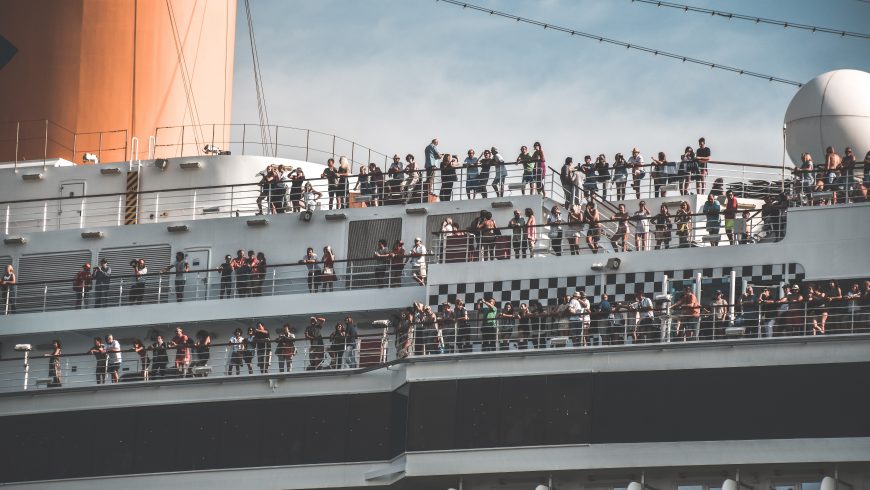 Photo by Leonardo Yip; on Unsplash

A trend of the moment is tourism influenced by mass culture. According to this kind of tourism, people chose the destination based on social media, influencers, television programs and films. Tourism influenced by film and TV series products, also known as film tourism, has in some cases led to real disasters. An example is what is happening in the Pacific Islands: in Thailand at Maya Bay, where the film “The Beach” was shot with Leonardo Di Caprio. Over the years, tourists who wanted to see the film set invaded the small beach. This forced the Thai government to prohibit the entry of tourists to restore the delicate balance of the beautiful bay. 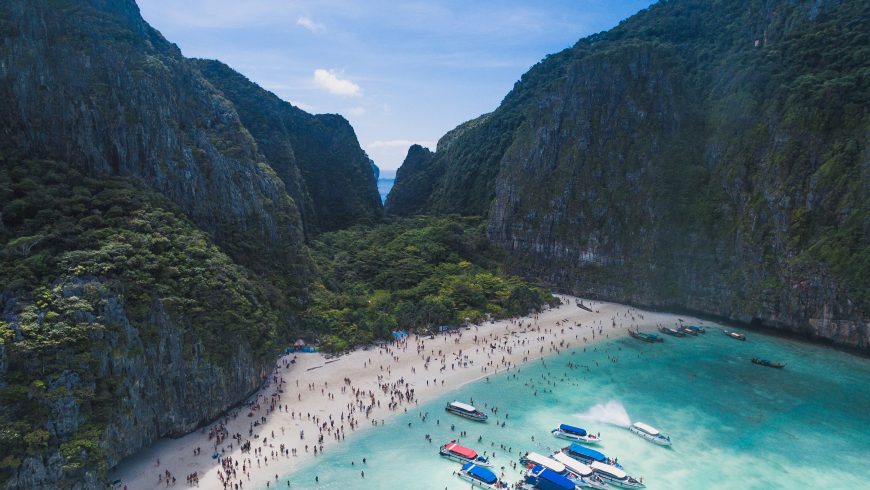 Photo by Humphrey Muleba on Unsplash

The increase in low-cost air flights and cruises is certainly one of the causes of Overtourism.

The numbers published by the World Tourism Organisation (Unwto) speak for themselves. Even in Italy, we have examples of how mass tourism damages the nature and residents of cities invaded by travelers. Venice, for example, is visited by about 20 million people a year. A number a little too high for such a delicate city, devastated also by cruise ships causing pollution. 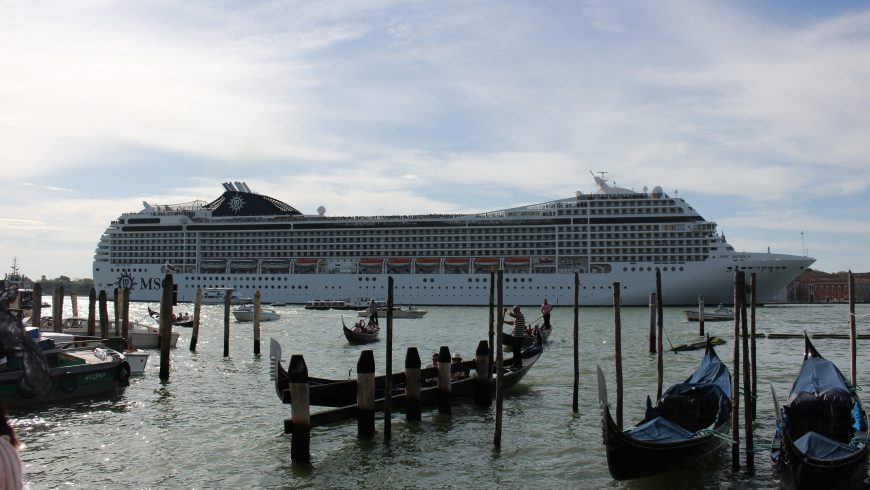 Photo by Lucie Hošová on Unsplash

Even Florence, Capri and the Cinque Terre National Park in Liguria suffer from the excessive number of tourists arriving every year. This influx is leading the administrations of the various Italian municipalities to take steps to limit the number of revenues. 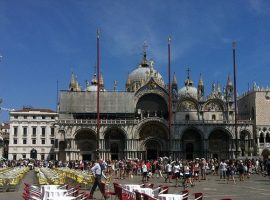 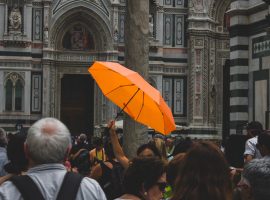 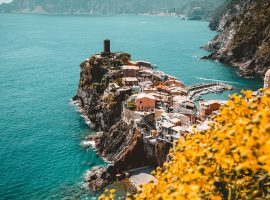 The flora and fauna are usually the first to suffer overtourism in the most popular natural tourist destinations. In some natural destinations, environmental issues led to the destruction of entire ecosystems. Among these problems, we can mention deforestation, exploitation of the soil and pollution. But also, no policy of raising awareness and protecting natural environments. In some cases, this situation has no possibility of redemption, such as, for example, what happens to coral reefs around the world. As global warming and tourists irreparably ruined them, corals are part of a natural system that is becoming extinct. 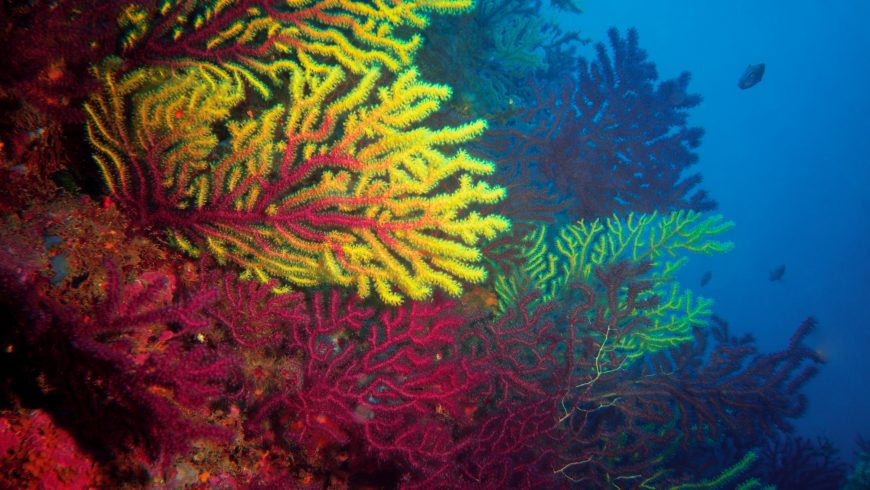 Photo by Juanma Clemente-Alloza; on Unsplash

2. Increase in the amount of waste

Another consequence of mass tourism is the large accumulation of waste that people don’t differentiate. Inevitably, it creates a major environmental problem of disposal and pollution. Boracay Island, in the Philippines, has been closed to restore the ecosystem after years of uncontrolled tourism. The waste problem is also very important on the island of Bali, which is trying to combat it thanks to the thought of Zero waste Bali. 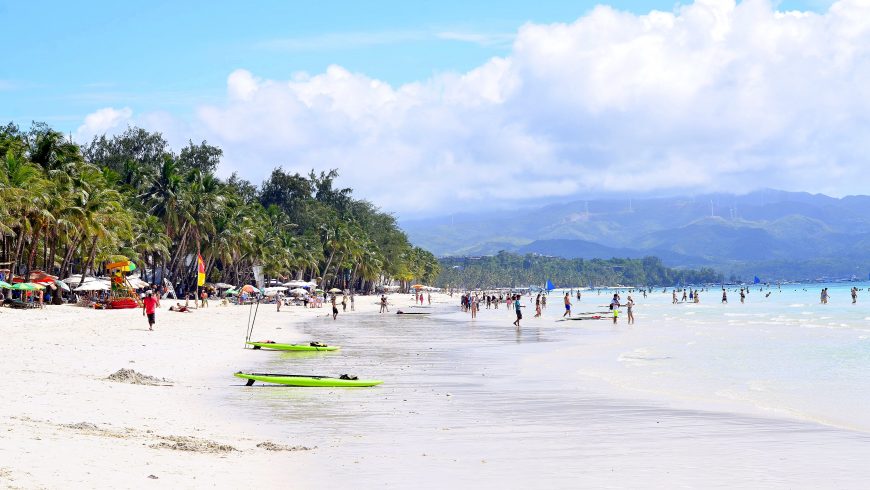 Photo by Laurentiu Morariu; on Unsplash

3. Escape and malaise of residents

Too much tourism affects mainly the locals. Across Europe, in cities like Barcelona or Venice, the phenomenon of overtourism has unleashed strong tensions from the inhabitants. Residents complain about the rising of housing prices and rentals. In effect, they inflated them due to the spread of online platforms such as Airbnb. But also, they talked about the disappearance of small shops, replaced by tourist shops, and the inviolability of their cities. The last consequence is the escape of residents from their cities, which have become tourist theatres, thus losing their authenticity. 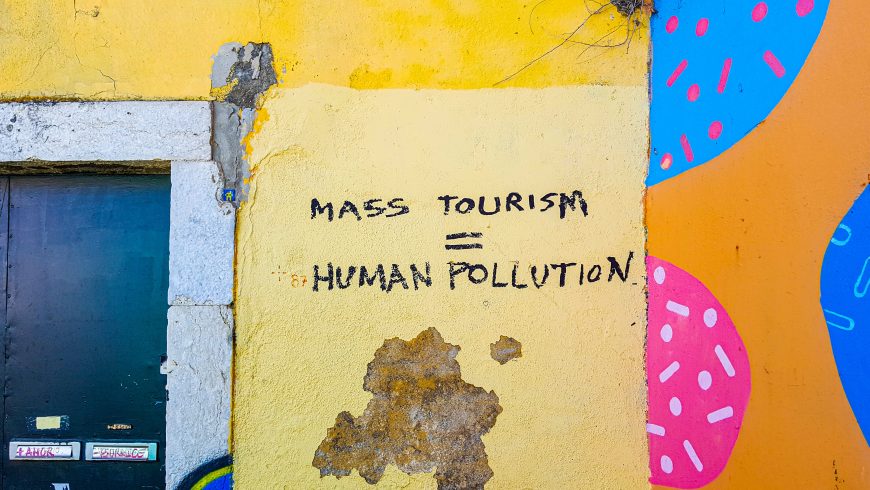 Photo by Laurentiu Morariu; on Unsplash

Solutions to overtourism for destinations

As tourist flows around the world increased, the World Tourism Organization (UNWTO) has dedicated an entire Report to overtourism. Certainly, there is not one single solution, but many small things that we can do during our holidays. The Report thus proposes 11 strategies and 68 measures to combat excessive tourism.

Here are the 11 suggestions that tourist destinations can follow to counter the phenomenon of overtourism. 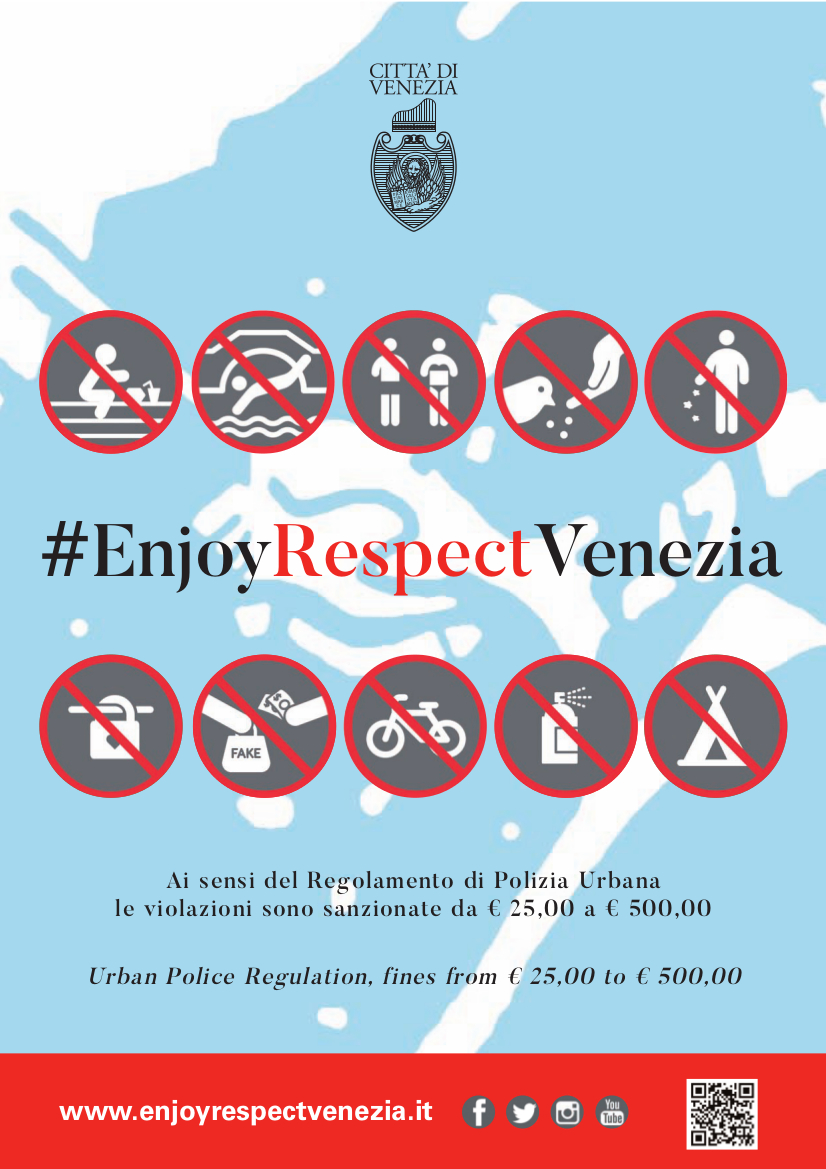 To counter the phenomenon of overtourism, the city of Venice has introduced these rules for tourists, image via ComuneVenezia.it

And what can we do?

With Ecobnb we promote responsible tourism, avoiding overcrowded famous destinations and promoting the close destinations. Often we don’t know what surrounds us and which beauties we can find without necessarily taking planes that emit huge amounts of CO2. Slow and sustainable tourism offers authentic locations. These places enrich local communities and those who invest in eco-sustainable activities. The real holiday could also be for you the relaxing and unplugging holiday. You could simply recharge the energies in contact with nature. Nonetheless, remember to try and lessen as much as possible for your environmental impact. 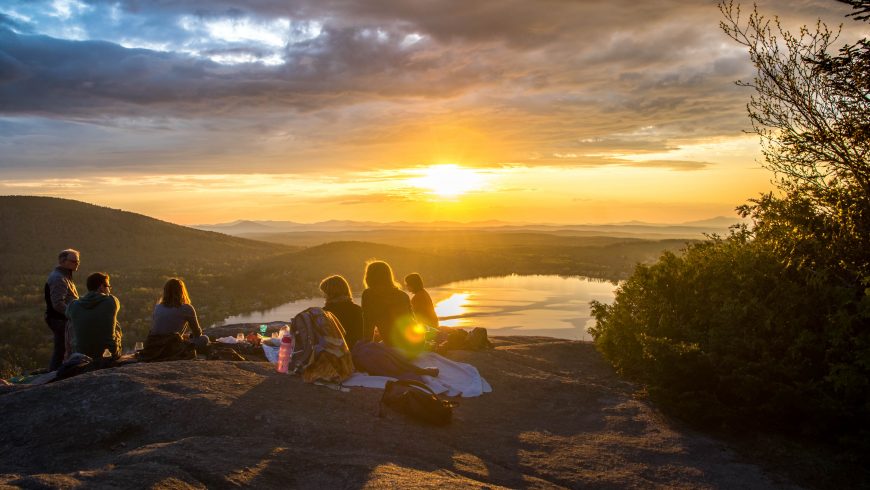 photo by Arthur Poulin; on Unsplash

The good news is that each of us can do our part to counteract overtourism and promote sustainable tourism.

Here are 5 simple ideas, a vademecum, to promote quality tourism, instead of quantity, every time we travel. 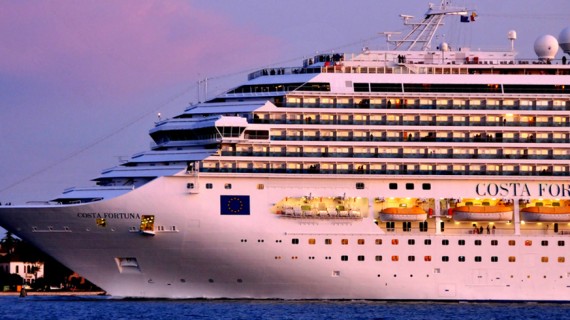 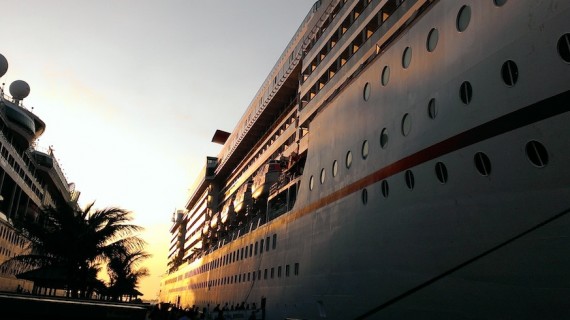 A Cruise Ship Pollutes as One Million Cars

Cruise ships are often associated with luxury and total relaxation, but in reality, they represent huge damage to the environment and the health of passengers and port cities. Cruise ships not only create significant environmental damage but are extremely harmful to health due to their exhaust gases. This is what emerges from the 2016 Environmental […] 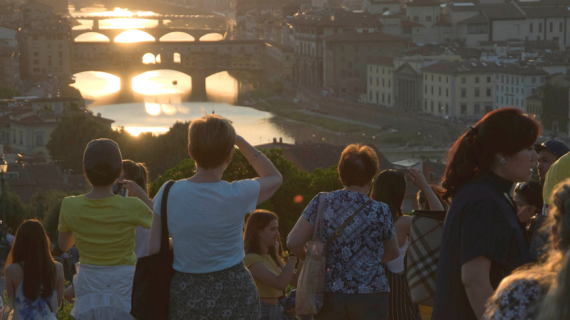 Save our cities from overtourism!

SET (Sud-Europe facing Overtourism): a network created by 15 European cities to denounce the destructive effects of mass tourism and promote the research for a new touristic system. Mass tourism brings enormous amounts of tourists in the main cities. The effects of the so-called overtourism are indeed severe. Cities lost their original artistic, natural and cultural heritage: […] 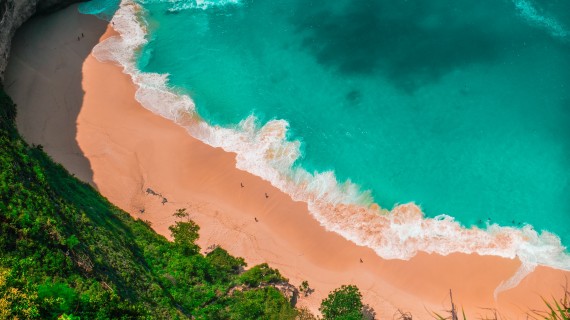