The second industrial city in the Netherlands combines street art and sustainable development to give its citizens a brand new conscience.

If you find yourselves wandering around the pedestrian areas of Rotterdam, do not forget to look down at your feet. “Stand straight, walk proud” suggest the crosswalk that passes through one of the most chaotic districts of the city centre, where pedestrians have now acquired new power: they are not afraid of car horns and drivers’ impatient and nasty looks anymore and, on the contrary, they now embody the harbingers of a human-sized future. Or even better, an environment-sized future. 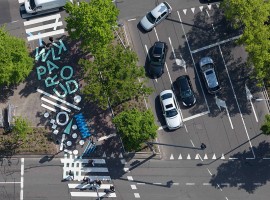 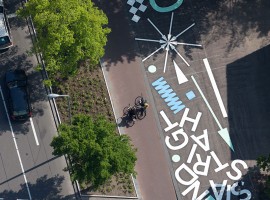 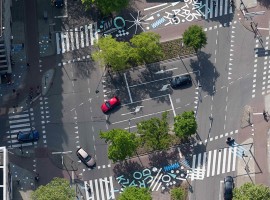 Art on the streets of Rotterdam

For this reason, The Creative Crosswalk Team, with the help of Street Makers association, has decided to transform the way in which we cross roads, conveying a double meaning to it: firstly, it has an artistic significance as an artwork created to amuse the audience and secondly, it has an ecological significance as a work with a value which goes beyond mere beauty and which makes the pedestrian meditate on the environment, sometimes consciously and sometimes unconsciously.

And it is right in this moment that we wonder: isn’t it this the real aim of street art? To combine more elements in order to have a bigger impact on the viewer?

The power of Street Art

Since it first started, street art’s main target has always been to shock, educate and engender doubts and questions in the head of the person who ends up looking at it, sometimes without even wanting it. It is “urban” because it is not locked up in a museum. Urban indeed, as everyone who steps out of the front door and ventures into the city streets can see it. In this, in fact, lies its power: in reaching people’s thoughts without the need of being searched for or even explained. Sometimes, as Adelheid’s story proves, street art can leak in us, changing our perspectives at the most unexpected time.

Street art is an outburst, a silent scream, which manages to convey critical consciousness. From Banksy’s
war and oppression images to crosswalks in Rotterdam, its aim does not change, but it evolves instead,
adapting itself to present needs. Nowadays, the safeguard of our Planet certainly gets a place on our priorities’ podium.

Adelheid, 29 years old, born and raised in Rotterdam, does not remember the first time she consciously chose not to drive to work and walk there instead. She tells, with a smile on her face, that she woke up one day with two words in her head: “Walk proud” they were, and she had probably noticed them on the crosswalk near her house the day before.

She instinctively felt the need of being a part in making her city an example of sustainability. While she was walking that morning, she thought about her children and the world they would have been living in once they had grown. To this very day, Adelheid feels proud when she walks and so do many others living in Rotterdam, who have chosen a sustainable alternative, also thanks to Street Makers. Thanks to this organization’s creative and genius ideas, viability has become lees boring and more stimulating.

Women and nature: living in countryside lengthens your life