Climate change is a real thing, even though there are still some people, who do not believe in it. Just 2°C rise in average temperature of the planet can cause huge problems for us- and it is expected that till the end of our century, the temperature will rise of 3.2°C.

It is important to talk about climate change and Leonardo DiCaprio knows it very well. He invested a lot of time and money into fighting this problem and even filmed a documentary. Lastly, Leonardo had a speech on Yale Climate Conference, where he suggested 3 essential things, that each of us can do to fight climate change.

In the beginning, he said, that many politicians simply do not believe in the climate change. They are closing the eyes against all of the scientific proofs, because admitting the problem would deprive them a lot of money. And they are simply not OK with that fact. If, however, the public is convinced about the effects of climate change, the politicians will fall very quickly. He said, that we currently have the technology to meet 100% of our energy needs from clean, renewable, cost-effective sources.

We need more leadership not only from public, but also private sector. He encourages the entrepreneurs to power their businesses ecologically and with every step they take, look at the ecological footprint as well.

Leonardo also mentioned, that we have the highest CO2 emission, we have ever had. We are causing the climate change. He said, that climate change kills people and he is absolutely right. In fact, there are 400,000 deaths worldwide caused by climate change every year. It is estimated that the number will rise to 600 000 deaths yearly by 2030. 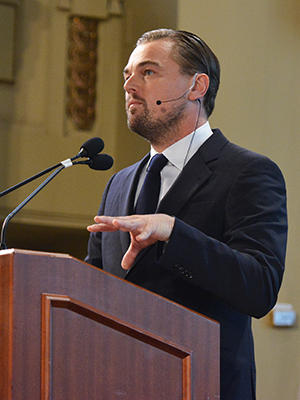 Photo by Michael Marsland via news.yale.edu

Facts above are simply not admissible at all. Therefore, he suggested three simple things, everybody can do to save our planet:

Vote for politicians, who believe in science. Vote for the ones, who admit, that climate change is real and it is the one of the main issues we need to change.

Support organizations, that are working every day to implement solutions to climate change and help to eliminate the impact.

In the end of Leonardo´s speech, he encouraged students to be the change and get involved. “Time is up. The current events have become a global wake-up call to act. It is too late for any of us to be too ignorant or silent… we need the change now. “ He ended the speech.