Pearls set in unforgettable landscapes, stretches of water surrounded by pristine countryside and picturesque villages: Italy is a rich country of lakes, often known around the world, and they are ideal for a relaxing holiday, among walking on the greenery, some hours under the sun, tours on a sailing boat and unforgettable moments with your partner, friends or family.

Here are 1o ideas of holiday at the lake for a summer of relaxation and nature:

Between the mountain and lemons 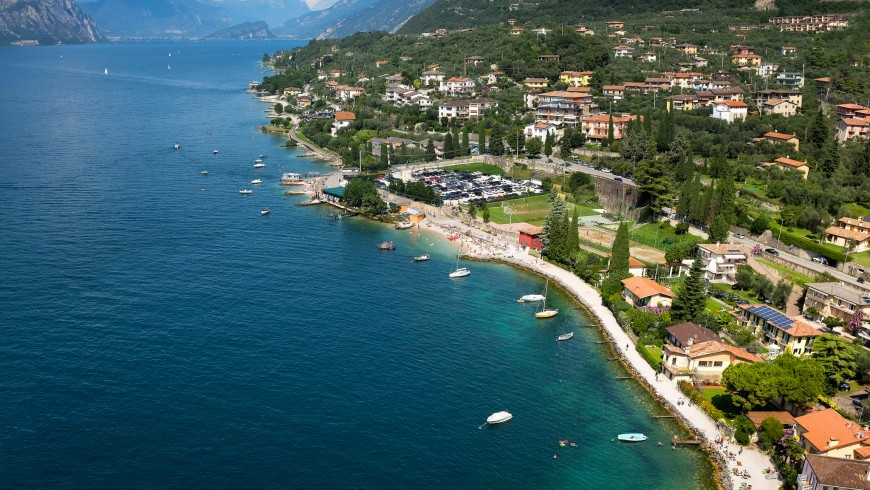 At the northern tip of the beautiful Lake Garda, between Trentino and Veneto, the mild, almost Mediterranean climate, of the lake meets the alpine air, creating a beautiful landscape. The lake is surrounded by mountains that reach up to 2000m above sea level, while in the valley, on the shore, grow lemon and olive trees.
It is a paradise for lovers of nature and sport, between walls of rock for climbing, windsurf rental and sails, bicycle paths.
Malcesine is located between Lake Garda and Monte Baldo, that make it a must destination for all seasons. The center develops around the impressive Castello Scaligero, in a succession of narrow, cobbled streets that create a picturesque setting.

Where to stay: Eco Hotel Ariston invites you in its beautiful garden for a relaxing holiday just a few steps from the historic center of the village and from the beaches. And there is also a charging station for electric cars! 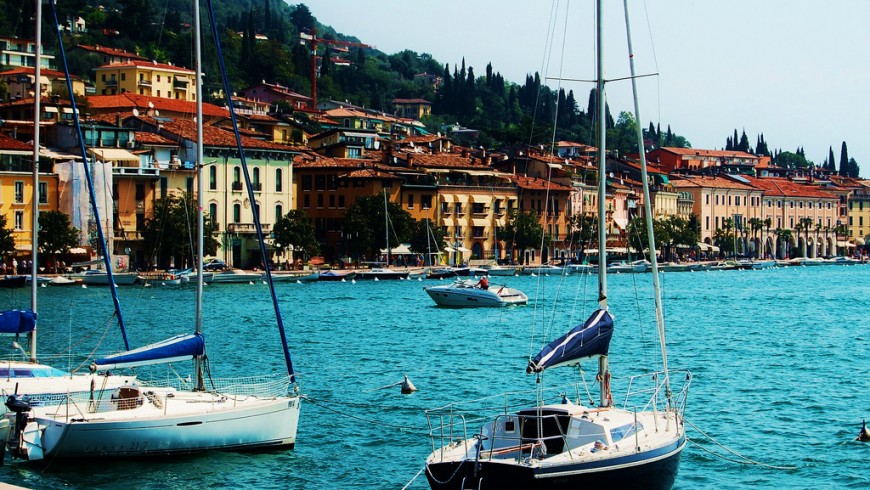 On the Brescia side of Lake Garda, there’s Salò, the first town on the Riviera of the lemons. The town, surrounded by cypresses, olive trees and oleanders, has a noble appearance; the old town is a succession of narrow streets with elegant shops and mansions. It is undoubtedly one of the pearls of the basin and my advice is to enjoy its hidden beauty at a leisurely pace, walking on the lakefront and for its narrow streets, discovering the Church of San Pietro di Salò, the Duomo and the many picturesque corners. We are at the foot of Mount San Bartolomeo and it seems that green dive into the turquoise waters. A few steps from Salò, there is the Vittoriale, the house-park of D’Annunzio, an amazing testimony of the era and of the poet’s personality, with its original furnishings, precious and exotic objects and a huge library.

Where to stay: Not far from Salò, in the small village of Toscolano, there is the B&B Casa del Tempo Ritrovato rising on a hectare of ancient olive grove. Here you can also experience the Glamping, sleeping in a yurt surrounded by greenery with a breathtaking view of the lake.

In the green heart of Umbria 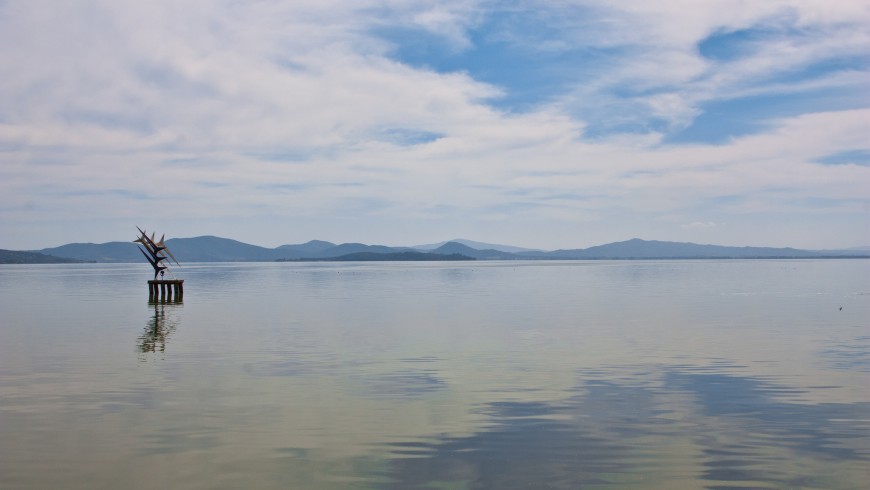 Land and water come together in this corner of Umbria, green and blue come together to create a breathtaking landscape. A thriving area, enriched by a large number of castles that overlook the basin: it is a magical place made of reeds, small villages and wild ducks. Many painters throughout history have tried to bring to the canvas this place so harmonious. You can cycle along the ring of Lake Trasimeno, through the beautiful villages, while enjoying freshly caught fish and soak in this amazing regional park of great natural importance. The frame of the basin is made even more magical by the presence of three islands, 2 of which are currently accessible.

Where to stay: a Passignano, set in a forest of oaks,  this organic farm, built entirely according to the principles of green building, awaits you.

At the foot of the sacred wood 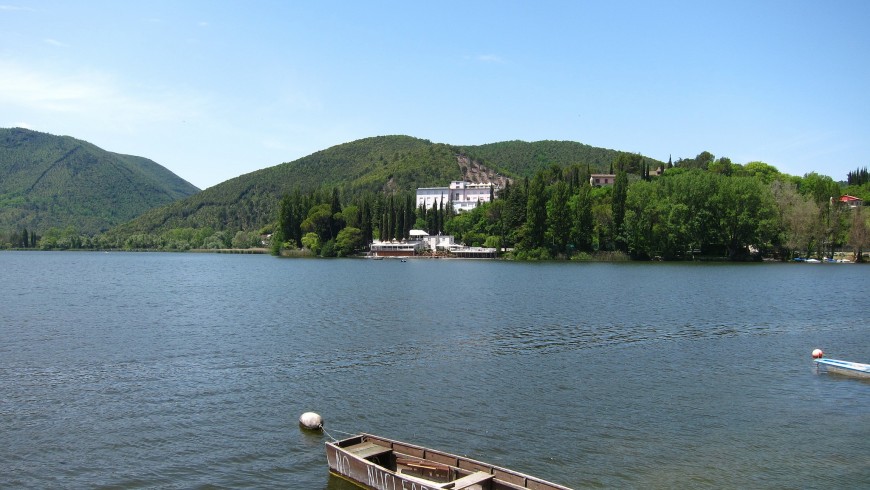 This is the meaning of Piediluco, the name of a picturesque town, not far from Terni, and its lake. The Alps are far away, yet the Lake Piediluco recalls an alpine stretch of water. Its dimensions are modest yet the atmosphere is magical and the view is fascinating. All around there are thick forests and rolling hills including Mount Caperno, cone-shaped, and often called Mountain of Echo for out of it you can hear a clear echo, in favorable conditions, of an entire endecasillabo. A few steps away is the amazing Marmore Falls.

Where to stay: to visit Piediluco Lake and the Umbrian region there is no better structure that the B&B I Cavalieri del Lago, a stone villa on the shores of the lake, surrounded by greenery with a beautiful heated pool.

A charming place and a suggestive castle not far from Rome 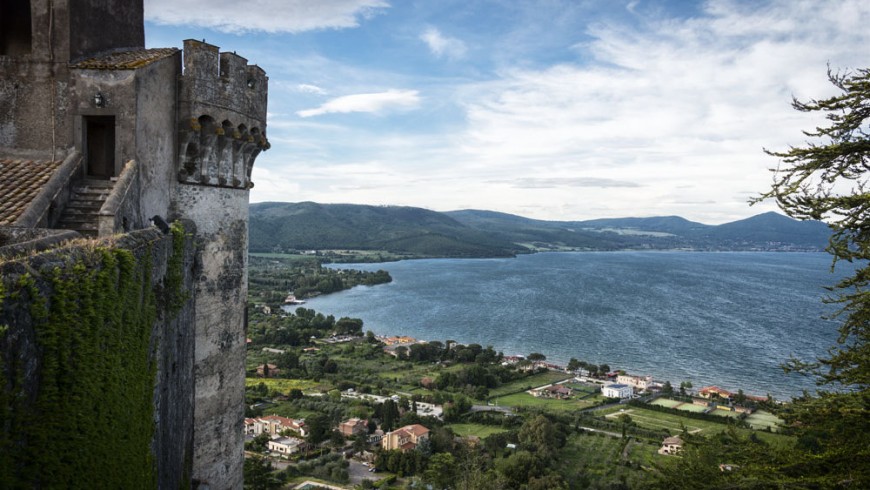 You have two options: visit the amazing Castle Orsini and from there admire the lake or take a sailboat and admire from the lake the Bracciano Castle, one of the most beautiful European houses. The result is the same: a breathtaking view, perfect and exciting atmosphere. The Castle dominates with its majesty its town that has ancient origins. Around  between forests, olive groves and nature you’ll find archaeological remains.

Where to stay: from Bracciano, in a few minutes you can reach Casacoco’, the delightful and charming refuge in the Roman Tuscia, with renewable electricity and solar panels. 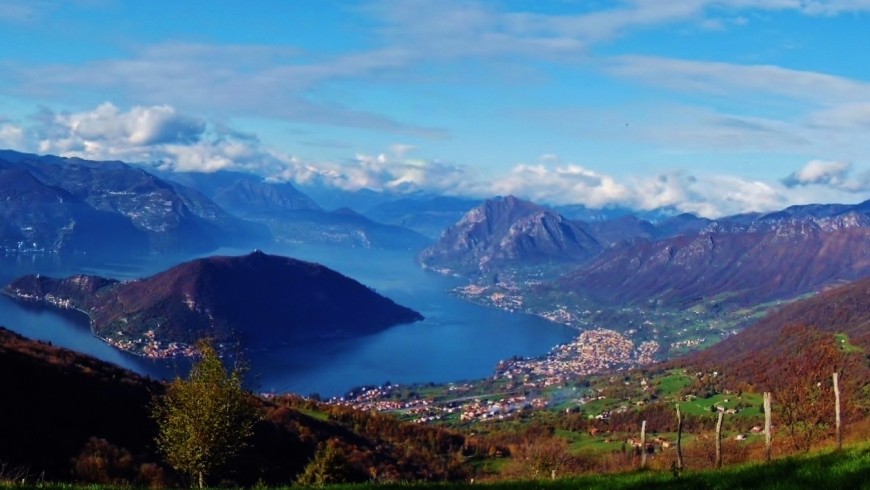 We often forget, because in the North there are greater lake, but it really has nothing to envy to its more famous neighbors. He knows those who live there, because you need just a summer sunset to find peace. Magical ancient villages invite you to relax with a glass of Franciacorta wine, different species of birds flying over the turquoise waters, approaching the picturesque islands of the lake, the small gems, those of Loreto and San Paolo, and the larger Montisola.

Where to stay: close to the magical Lake Iseo you can find the romantic Zorzino Castle from which several apartments were recovered or this nice organic farmhouse tha produces Franciacorta DOCG near the picturesque Iseo town. 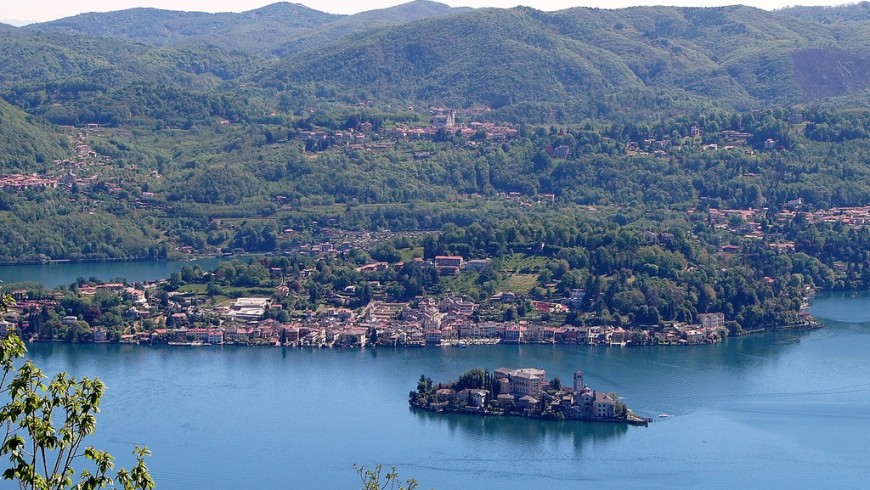 We are in Piedmont and near the larger Lake Maggiore there’s a pearl set among thick forests of chestnut and beech trees and mountains. It’s perfect for those looking for secret places, far away from mass tourism. The villages are elegant and romantic and nature is still wild. All this is enhanced by the islands in the lake, which look like small diamonds. The island of San Giulio gives new emotions and the basilica, with the facade and steps directly on water, alone is worth the whole trip.

Where to stay: Nestled in the picturesque scenery of Lake Orta, in its most important village there’s Villa Crespi, perfect place for a romantic getaway. 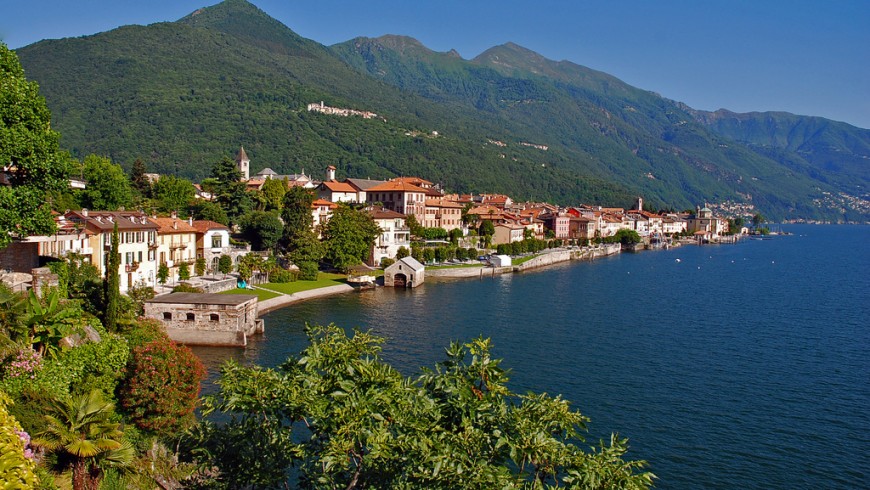 It does not need big introductions, Lake Maggiore is known throughout the world and artists and writers have often spoken of its beauty. Montesquieu described it this way: “Often the surprise is aroused in the soul because this can not reconcile what it sees with what it saw. There is in Italy a large lake called Lake Maggiore; it is a small sea whose edges do not show anything but wild nature. In the middle of the lake, fifteen miles away by the lake shore, there are two islands of a mile round , so-called Borromeo, which are, in my opinion, the most beautiful place in the world. The soul is surprised by this romance contrast, recalling with delight the wonders of the novels, in which after passing rocks and arid countries, you find yourself in enchanted places. ”

Where to stay: close to the basin you will find two eco-friendly accommodations, the B&B Il Gatto Nero nestled in the woods 650m above sea level and the B&B VerdeAzzurro for a rural holiday with sweet donkeys.

In the heart of the Sila Park 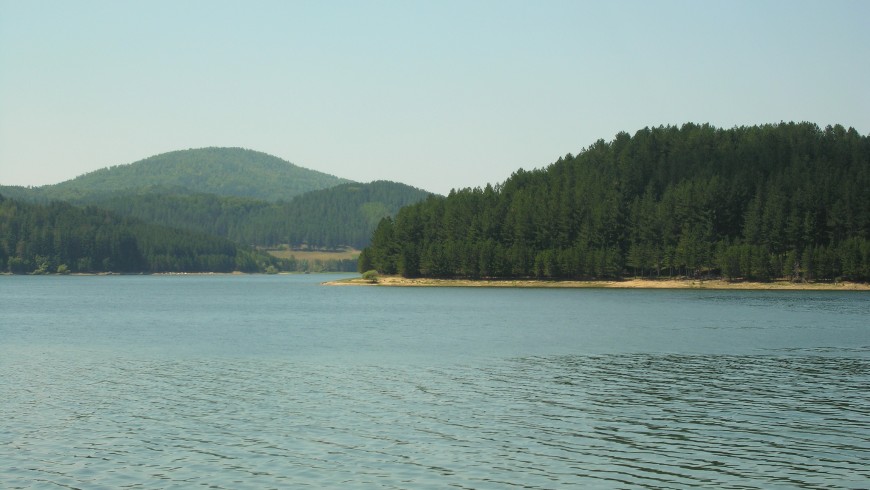 A national park of 150,000 hectares of natural treasures: different landscapes, medieval villages, beautiful forests, rolling highlands; It is the wild corner of Calabria. The symbols of this vast land, so rich and beautiful are the woods, the wolves and the lakes. Among the latter there is Arvo, an artificial basin in the province of Cosenza, that invites us to relaxation, for a day of fishing or a trip on a pedalo.

Where to stay: The accommodation Fattoria dei Ricordi, WWF oasis, invites you to discover this corner of Calabria offering you comfortable rooms and a great breakfast with fresh milk and delicious homemade desserts.

Dive into an alpine lake 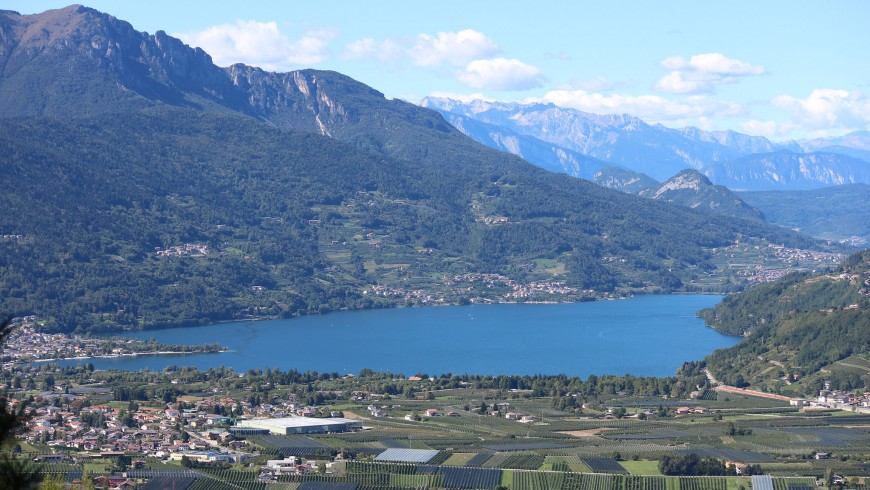 Among the green massifs of Trentino, lies a large body of water, perfect for a summer holiday. We are in Valsugana, area dotted with orchards and typical Trentino’s villages and despite the large number of tourists, the Caldonazzo Lake is an oasis of love. It is an alpine lake, but the water temperatures easily reach 24° in August, making it one of the warmest lakes in southern Europe. It is a paradise for those who love water sports like canoeing, windsurfing and water skiing.

Where to stay: breathe the scent of wood and nature at Alessandra and Alex’s home, 200 meters from Lake Caldonazzo. The B&B Casa sul Lago will delight you with excellent organic breakfast. 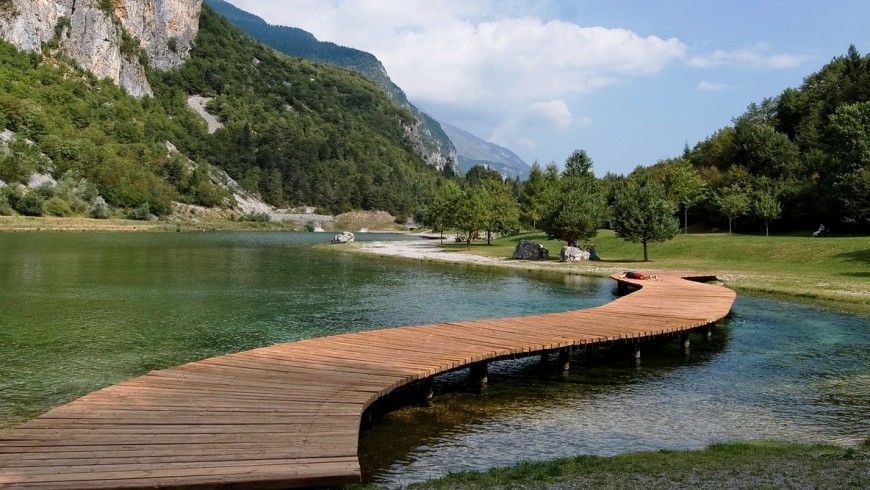 A natural oasis within the beautiful Adamello–Brenta Nature Park is the Nembia Lake, a small basin of water surrounded by woods inhabited by the typical alpine fauna. You just have to sit back and relax, in front of this show.

Where to stay: discover the wonders of Trentino and the other lakes staying at the Garnì Lake Nembia, a hotel dedicated to sports and wellness immersed in an enchanting scenery.

10 things to do in Maira Valley with children

10 wonders of nature that will leave you speechless