Did you know that there is a small community of people who pass their life in a forest, living in tree-houses?

Is not Koroway Tribe in Nuova Guinea but instead people like us that left their boring life downtown to live a life as much as possible melted with nature!

The Sleeping Beauty… of the cestnuts forest

Dario, Alessandra and their daughter Galatea are some of the protagonists of what, at first sight, looks like a mix within “Robin Hood” and “Tarzan”…without the apes! They and other people have done a great job by abandoning their houses in Piemonte in favour of a life in a caltilevered village upon Bella Addormentata (Sleeping Beauty) mountain, in Piemonte, Italy.

From 2002 the Cavanese village (that’s the name of the territory there the mountain is)has grown more and more. Lot of people has come to build their home within trees with pulley and string and respecting the natural develop of the environment. 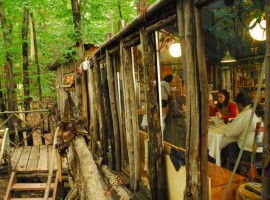 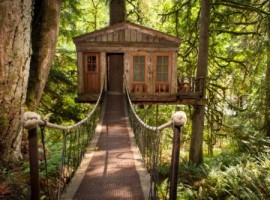 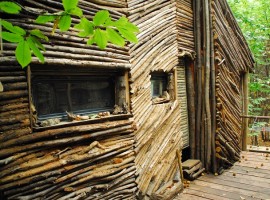 You don’t have to think that those people has gone to live in the forest without any kind of comfort! They just turned their life into something more relaxing without abandoning technology. In almost all the wood houses there is a computer, a printer or a television…there is even a hydro-massage!

You may think that staying in a small chest among the brunches its’ easy but it’s not like that. Ask Dario. You need beams to support the structure of the house, strong muscles and, naturally, all your for the ecosystem.

At first, the mountain where now there’s the village, was an empty and consumed territory exploited by the forest services. Then, with the construction of the village, born to re-establish the eco-system balance, the nature has got better.

Daily works are developed in a calm an pacific atmosphere, in the village. People help each other, there is a recall of the easiest aspects of the community life. The problems that you can have from living in a forest are the most common: snow, wind, rain, ice…and nuts that fall down. But the inhabitants say that they are used.

I you reach the centre of the village, almost 4 km far, and if you ask someone where to find “the forest community” you will have the same reply: «Up to the mountains.» and it’s like they  to invite the curious ones to reach this hidden and secrets world.

Living there it’s like having a unique and huge family, even if everyone has a job so far when they go back, or up as well, to share a meal and the daily facts in a enviable atmosphere of peace and serenity.

For those who are interested to live an experience among the trees it’s possible to reach Dario and his “planty neighbors” observing how is their life and what do they do. You do not have to pay anything but instead you have to help them with their daily works.

In the last four years many touristic organizations have adopted the idea of “tree houses” to sensitize the environment topic in a easily way understandable by the tourists.

People can breath fresh air and walking in the woods or biking to try just once in their life how is sleeping in a real “tree house”.

So, there’s a ton of ways to get the humans closer to the nature, surely a tree house is one of them.

And what about you? Would you try to spend a day in a house made of wood in a fascinating village in the wood?

Live on a tree house