Langhe, Roero and Monferrato are an environmental unicum in Italy: a hilly area between Cuneo and Asti, in North West of Italy whose beauty is breathtaking all through the seasons and whose life quality is incredible high. Not a coincidence UNESCO has just appointed this extraordinary Italian corner as the 50th World Heritage site in Italy. What makes this land so incredible that the UNESCO decided to award it with this title doomed to protect and preserve its unique atmosphere? Let’s go through the 5 main reasons a visit to Laghe, Roero and Monferrato will make your life better and nurture your spirit…and not only that. 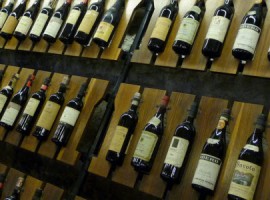 Excellence of Langhe: Barolo by Blue Moon in her eyes via Flickr 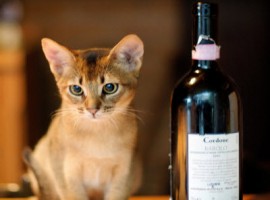 The kitten and the barolo by Alex Brown via Flickr 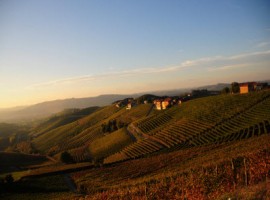 Another glimpse of the Langhe: sunset over Barbaresco village and vineyards by Jason Kallsen via Flickr

Barolo wineDry and robust, it complements the stellar meat and cheese produced locally. The most expert aenologists can even define a more “male character” in the Barolo of the West area of the Langhe and a more “female character” in the wines produced on the East side of the area. Just have a glass and let us know what you think about.
Barbaresco wine:The Barbaresco is again a red wine but it is different than Barolo. The quality of the soil of this section of the Langhe area and the less favorable sun exposition makes the maturing a more elaborated process for Barbaresco wine. The result is an elegant red wine perfect match for the white truffle of Alba.
Arneis wine: White wine from the Arneis grapes. Though most of the area is planted with Nebbiolo grapes to obtain the important Barolo and Barbaresco, a few hectares are planted with Arneis grapes. Originally planted to divert the insects and little animals’ interest from the Nebbiolo grapes, it has now become a little secret for connoisseurs and the perfect wine to cheer up during the August evenings and not only. Just to name the most important and highly reputed wines of this area. 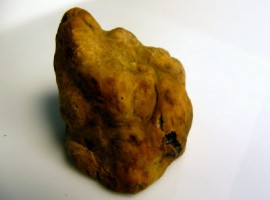 Product of the Langhe: white trufle of Alba by Blue Moon in her eyes via Flickr 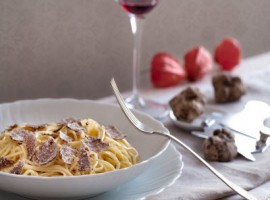 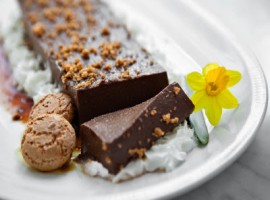 White trufle of Alba:  This white tuber has become the culinary highlight of the region. An international annual auction establishes the “white trufle” value at November. Apart from its picturesque side, the event is one of the most awaited for by the international audience of connoisseurs: bidding reaches incredible sums and ghost bidders struggle fiercely for their white diamonds on behalf of secret buyers (celebrities, Russian oligarchs, Arabian emirs and so on) The festival will welcome all white truffle lovers from 11th October to 16th November this year.
Tajarin pasta: mind you call this local pasta with the conventional name of “spaghetti”: these ones are “tajarin”. Slightly larger and flatter than spaghetti, they are made with eggs and flour. They taste heaven with a grat of “white trufle” but local mushrooms do them justice as well.
Bunet: A chocolate mousse? Not really. A chocolate fudge? Not completely. What is a Bunet like?It is a typical chocolate cake of a land where noisette trees were everywhere and noisette were and are as popular as rice in China or India. A bunet is a cake made of dark chocolate, amaretti biscuits and noisette. Very robust in taste, it is the local dessert you will be offered at the end of every meal. 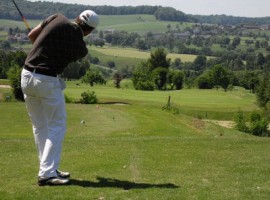 Playing Golf by Feelgoodpics via Pixabay 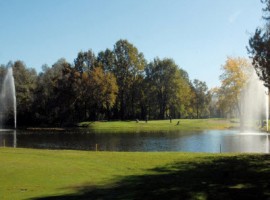 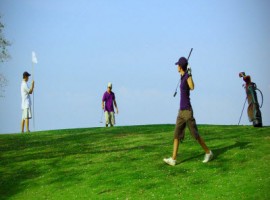 good life is made of good food, good wine and open air sports The area counts approx. 15 golf clubs in less than 100 square km and for every player level: pro or just amateur. 18 holes, 9 holes, difficult or less difficult, designed by international and reputed names or by local golfer, the common trait is: they are all beautiful and great fun to play. The mild slopes of the hills, the small lakes, the slim creeks and the changing colors of the vineyards leaves make each shot challenging and reinvigorating for your mind. Club Houses are usually friendly and cozy and…well stocked with Arneis, Barbaresco and Barolo as well. If you have any doubt about playing golf or you are thinking to start to practice, well no better place than this to make your first public appearance. And remember: golf is therapeutic and stress reliever. 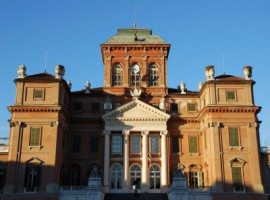 Langhe castles: Castle of Racconigi by Alessandro via Flickr 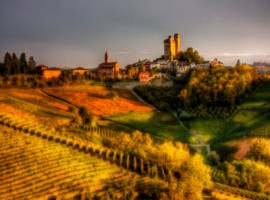 Langhe castles: Castle of Serralunga by Andrea Mucelli via Flickr 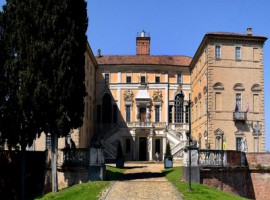 a royal corner of Italy. Did you know that the royal dynasty of Italy comes from this region? The origins of the Savoia family date back to X century in Piedmont and this west corner of the region witnesses the warrior attitude of the family: officers, good strategist in a battlefield, they were not unfortunately smart diplomats. The king Vittorio Emanuele II had anyway the happy idea of letting his Prime Minister Camillo Benso Count of Cavour manage all the state affairs and…Italy was born in 1861. The story of the Savoia family and of its little kingdom doomed to be at the origin of the Italian reign first and the Italian Republic later on can be easily read through the many castles, fortress and manors of this area. Some of the most well known and admired are: The Royal Castle of Carlo Felice Savoia in Govone was once a military fortress, then a hunting lodge and it is nowadays a public property surrounded by Italian gardens and included among the UNESCO sites. The Castello della Manta in Cuneo which is a mysterious and fascinating fortress featuring  a valuable cycle of frescos depicting  the “Fountain of Youth” and the “Male and Female Worthies” . It is now open to public thanks to FAI program for protecting historical sites. The Royal Castle of Racconigi where the last king of Italy, the handsome Prince Umberto, the King of just one month (May, 1944), grew as a child together with his sisters and his nannies and babysitters. The medieval Castle of Serralunga d’Alba high over the valley of nebbiolo grapes and many others you will meet while following the Barolo Road or the Romantic raod, two special itineraries designed for tourists and explorers. 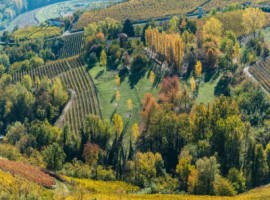 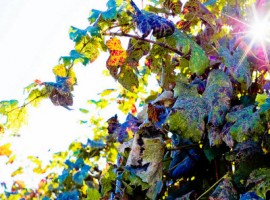 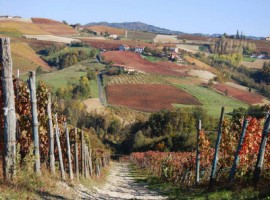 And now, it is internationally known.