Mad about football?
Were you wondering if Balotelli and Pirlo would have turned the Italian football team into the new 2014 World Champion?
For cyclists Pinar and Paolo “do not talk to me about football” must have been a motto throughout the frenzy that gripped Italy during the Football Championship.

Just a few days before the first kickoff on the Brazilian football fields, the two cyclists mounted their bikes and start their itinerary through the Alpine Pearls, a circuit over the Alps through 6 European countries: Slovenia, Austria, Germany, France, Switzerland and Italy. Pinar and Paolo biked up and down the mountains and through the valleys, even cramming their bikes in with them on the small mountain trains to reach some of their destinations. Impossible? As someone said “It is impossible until someone else does it” and they did it.
Along a 20 day bike, they met fellow cyclists along the way, both professional and passionate amateurs, shared stories and anecdotes, tasted local delicacies, paused speechless to take in breathless views, discovered innovative initiatives and they finally returned home feeling reinvigorated and ready to plan the next adventure.
Are you considering a similar experience? Let me tell in 4 quick points why you should do it. 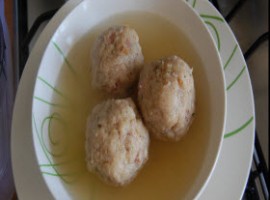 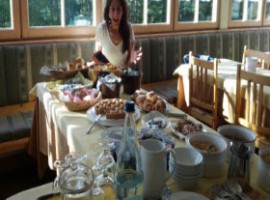 Gigantic breakfast before mounting the bicycles photo by Paolo Pinzuti via Bikeitalia.it 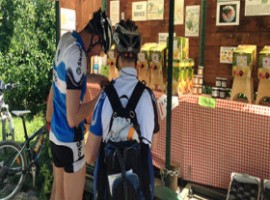 When travelling tasting foreign food and drinks is part of the magic: never heard of canederli in brodo or pizzoccheri? They are both typical specialities of the Italian Alpine area. Canederli are gnocchi made of bread and herbs or cheese served in a meat broth: perfect when it is raining and cold outside. Want to add a kick? A couple of drops of red wine to the meat broth will do the trick.
Pizzoccheri are even more delicious. It’s pasta dish made of whole-wheat flour and served with stewed broccoli, cauliflower and a large dose of grana cheese. Absolutely mouthwatering.
Not forgetting the typical Apfel strudel of Meran, this is the well-deserved reward after biking for hours in the morning. It’s heaven when served with warm vanilla ice cream.
When biking for so many hours and temperatures are cold, the right start to your day is vital and German and Austrian hotels, inns and hostels always offered Pinar and Paolo gigantic breakfast : eggs, sausages, selection of smoked ham, salami, cheese, bread of several type, marmalade, jelly, butter, croissants, homemade cakes, fruit and the list doesn’t stop there. 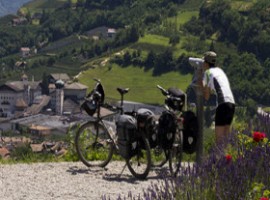 View over the valley photo by Paolo Pinzuti via Bikeitalia.it 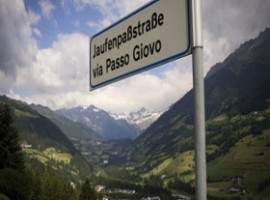 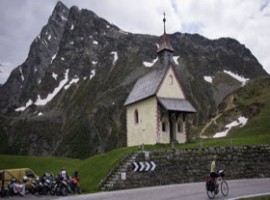 2. Looking for a thrill to raise your spirit? Mount your bicycle and go

Pinar and Paolo showed us how two passionate bikers living the everyday city life could climb the Alps: they biked through four different countries encountering challenging peaks, snow and lived to tell.
Can you imagine the thrill of having the Alps bare in front of you and finally enjoy the heavenly sense of satisfaction once you have made it?
It sounds like an exercise to reinvigorate body and soul, doesn’t it? 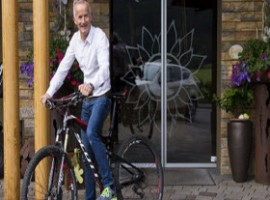 Peter is the owner of the first bike hotel in Austria photo by Paolo Pinzuti via Bikeitalia.it 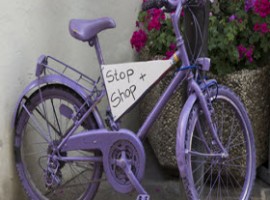 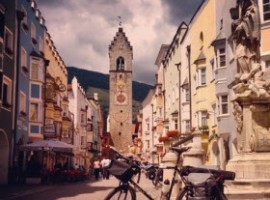 Bicycle and the city in Meran in Italy photo of Paolo Pinzuti via Bikeitalia.it

3. Bicycle and the city: a natural love story?

Cycling is always challenging in our hectic cities.
Some longsighted city administrations are investing in new mobility strategies and the bicycle usually plays the main role in their strategies. Yet, more often than not bike tracks are bumpy, not well signaled and they end in the middle of the car lane. We talked about it here.
Pinar and Paolo visited both villages and cities where cars and bicycles live side by side: well signaled cycling lanes, parking areas, pit stops and even more interesting for a profit oriented economy as ours, a complete economy thrives on this “living together, side by side”.
Mr. Peter turned his family run hotel into the perfect place for cyclists and when the local administration decided to make its local area car free, he already had everything he needed to welcome and host cyclists in the most comfortable conditions. Thus the first bike hotel of Austria was born years ago.
He did not stop there: bikers are often one night guest so he decided to start proposing tourist packages including local excursions by bikes.
No tourist gurus, no request for support: his marketing is based on word of mouth. 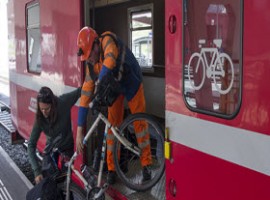 Bicycles on a train photo by Paolo Pinzuti via Bikeitalia.it 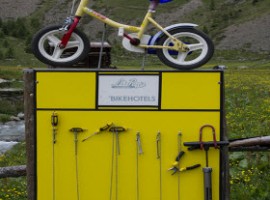 Pit Stop for bicycle photo by Paolo Pinzuti via Bikeitalia.it 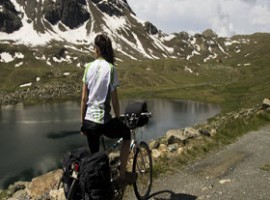 4. Stories: everybody loves a good story

Travelling meets getting to know different people, different realities and stories.
Mr. Peter recounted Pinar and Paolo the challenge he faced and showed us that trying to look ahead and imagine things that are yet to exist can be incredibly rewarding economically and psychologically.
But we all love good old fashioned stories as the adventures of the old smugglers during the beginning of the 20th century and during the II World War: they walked through secrete passages in Val Viola at night with lots of illegal goods such as coffee and cigarettes. And what about the story of a city where little squirrels cross busy city roads? Hard to believe? Plan a visit here and then let us know.

Now, if the urge to get your bike and go is stronger than never before starting just learn more about Pinar and Paolo itinerary here and do not hesitate to contact them directly to have precious tips and suggestion.
If you plan to start training before embarking on a similar adventure, well you have 4 years before next World Cup. I think it’s enough time.