Do you want to get to know one of the most sustainable places in Cantabria and Spain? Discover Noja through this green guide

Noja has a privileged location on the east coast of Cantabria, a few kilometers from Santander and Bilbao in the north of Spain. It’s the perfect location to visit places such as the Altamira Caves, Guggenheim Museum, and much more! Let’s discover Noja and find out the best things to see and to do in this beautiful place.

What to see in Noja

The Albaicín Palace or House of Doña Obdulia Bonifaz is a historic residence dating back to the 18th century, remodeled in 1916 by the architect Leonardo Rucabado.

Inside this beautiful building there is a botanical garden with more than 45 varieties of species, a swimming pool, a tennis court, a vegetable garden, and the “birdhouse“. Currently, the Albaicín Palace is the municipal house of culture, home to music courses, musical associations, and SIANOJA. In addition, guided tours take place inside the house, which we advise you not to miss. 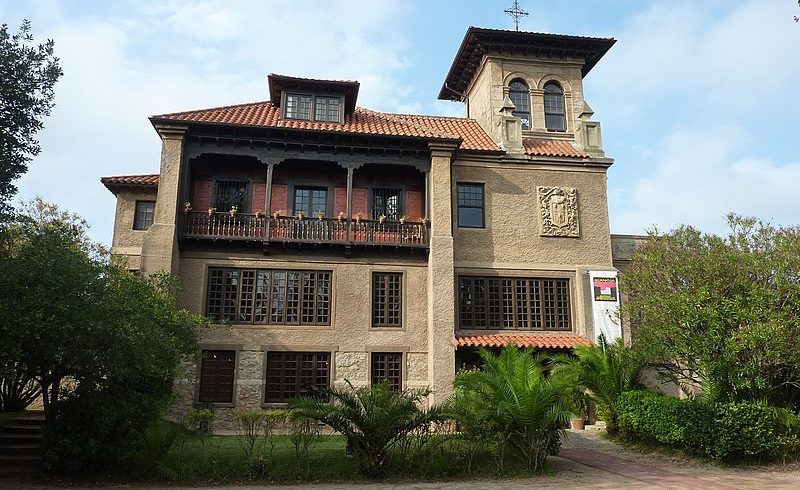 The Casa Palazzo de Velasco is located in the Plaza de la Villa in Noja. It is one of the most representative elements of the city for its great value and its history. Furthermore, the Via Reale passed in front of this palace. The oldest element of the whole is the tower, built in the twelfth century. On the facade of this house-palace, above the balconies there are three shields: the shields on the sides, in Baroque style, represent the coat of arms of the Santelices and Fernández de la Isla families, and the one in the center stands out with the coat of arms of Velasco and Castillo, sealed with a marquis crown and mounted on the cross of Santiago.

The Palacio del Carmen house, located in the Fonegra district, was built on an L-shaped tower. Its founders are Juan Antonio Cabanzo y de la Gándara and Josefa de Assas Venero. Outside the house you can see the coats of arms of the founders. In addition, the residence has the chapel of the Virgen del Carmen.

Currently, this building is undergoing restoration with the aim of becoming a research center and tourist area.

The 17th-century Casona de la Torre is located in the Cabanzo district, located in the urban area of Noja. This house-palace which belonged to the first mayor of Noja Don Juan de Cilla consists of the chapel, the tower, and the house.

The house of Captain Venero (Casa Arnáiz), founded in the 17th century, is located in the district of Cabanzo. Of this house, we can highlight its large romantic style garden and its coats of arms representing Cabazo and Venero. 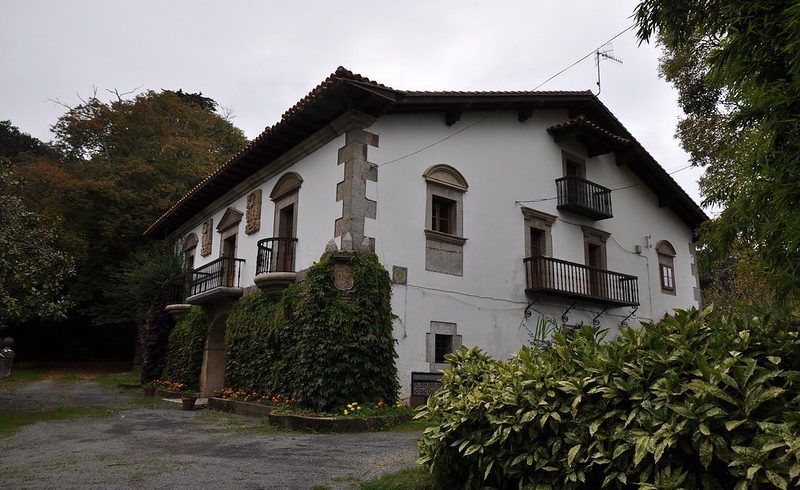 The 11th-century church of San Pedro is located in the highest part of the town, precisely in the Plaza de la Villa; where its Gothic-style tower stands out. In addition, another Renaissance tower built at the end of the seventeenth century by Galizano is discovered. The church has a transept plan with three naves, highlighting the central one, which is the widest. Inside there are some important sculptures, although the image of San Pedro in Baroque style placed on the main altar is the most important, being the patron saint of the parish.

It is a medieval bridge that is found going down towards Trengandín, on the way to the Helgueras district. This Roman bridge is made up of five arches, although only three are currently seen. 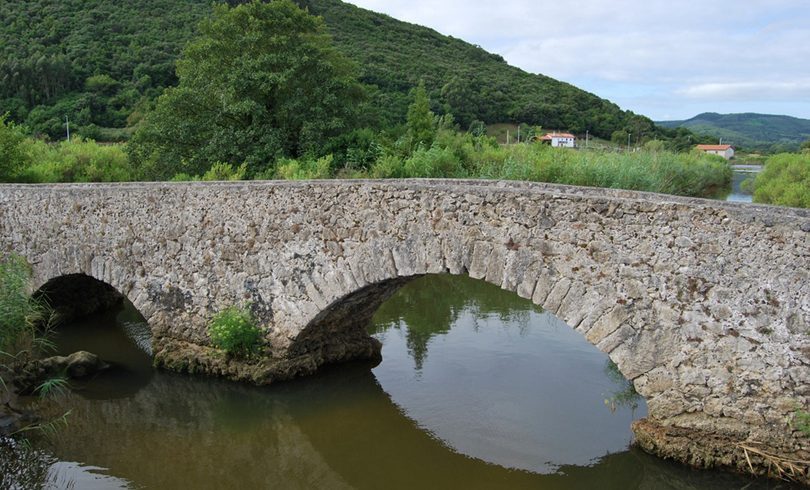 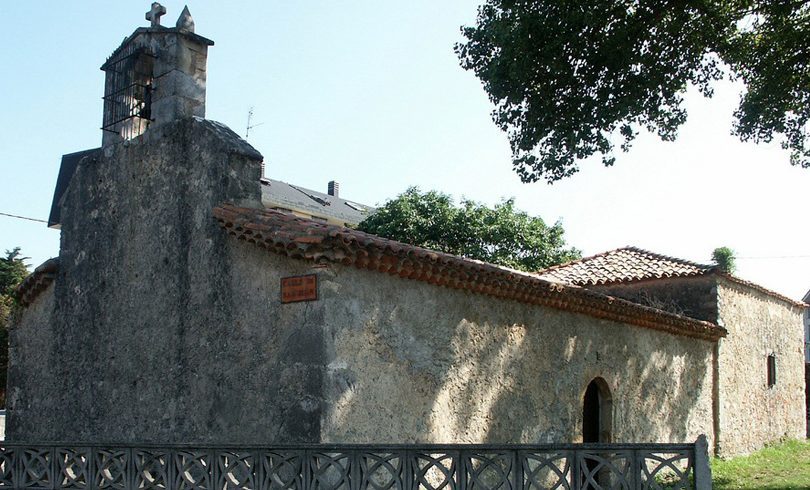 Our green tip: chat with the locals and ask about the history of these ancient monuments.

Noja stands out for the beautiful beaches, such as the beaches of Trengandín and Ris. Distinguished by their beauty and care, long walks can be taken along these beaches, as they are several kilometers long.

It is an easily accessible beach three kilometers long. Perfect at any time of the year, on this beach as well as being able to take walks and swim, you can practice sports such as surfing or windsurfing.

In front of the beach is the island of “San Pedruco” which can be accessed on foot when the sea reaches the lowest tide level. 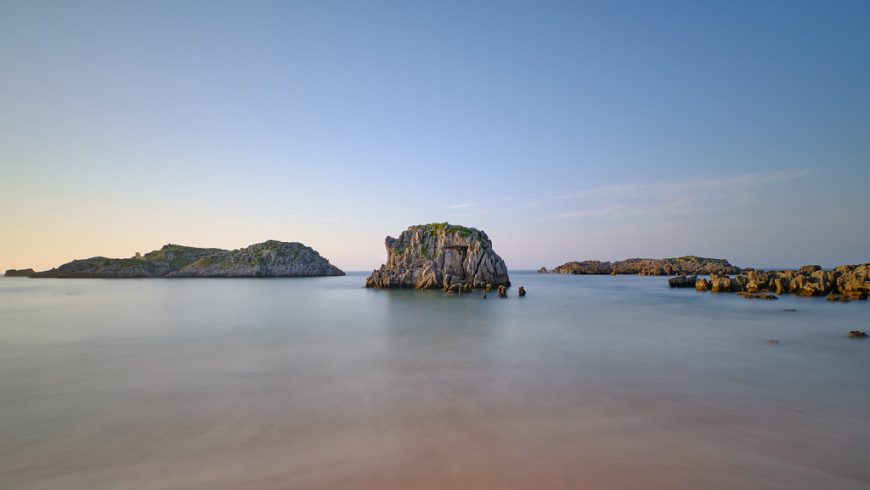 The beach of Trengandin or a large beach can be found going down from the church of Noja. It is a beach more than six kilometers long and in which when the tide goes out, you can enjoy a great landscape in which the rocks play a very important role, forming a lunar landscape. To access the sandy area, you have to go on foot, which means there are fewer tourists. Trengandín is one of the wild places that still remain on our shores. 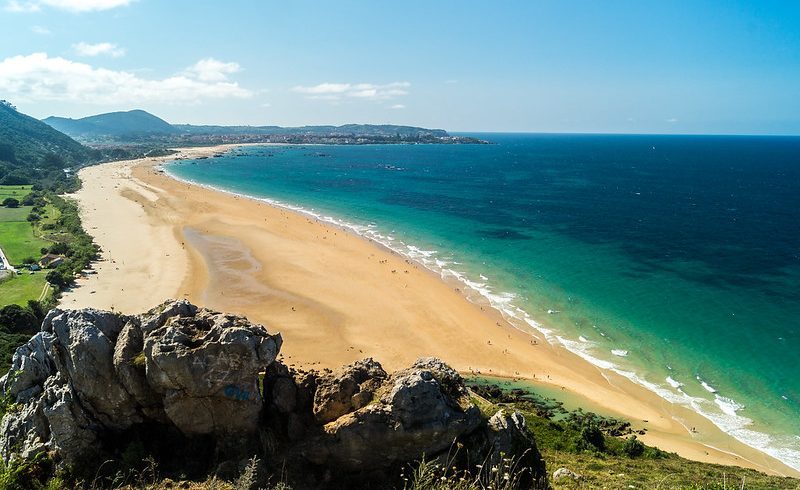 The Noja Marshes are part of the Santoña, Victoria and Joyel Marshes Natural Park. They are considered to be one of the best places in Spain, as they attract thousands of birds and are a great place for bird watchers. The Municipality of Noja is in charge of developing the “DeSEO Discover” program, through which guided tours are carried out. In addition, within the city, you will find an ornithological observatory and a revitalization center. 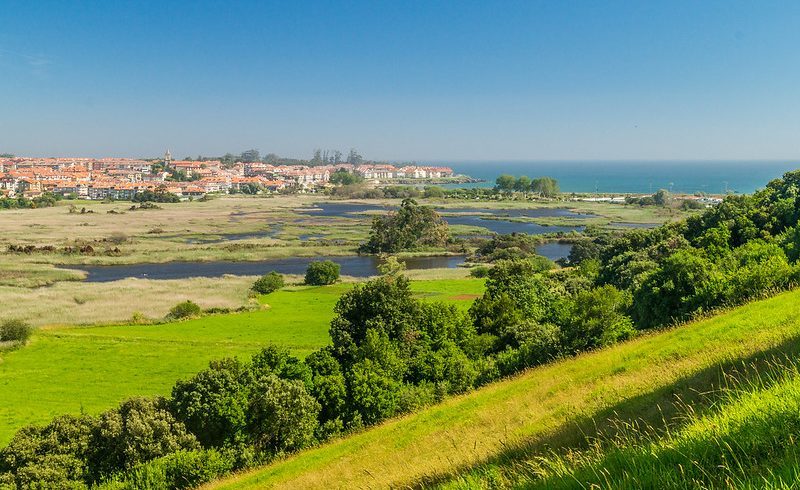 It is a swamp located in the Helgueras area, connected to the sea through a canal that crosses the Roman bridge. On this same bridge, you can enjoy the ornithological observatory where you can discover more than 50 different species of water birds that are part of the Nature Network. Likewise, in this enclave, you will find the Victoria Tide Mill known as the “Bird Mill” where you can enjoy a center for promoting nature tourism.

This wetland, located northwest of Noja, is part of the Marismas de Santoña, Victoria and Joyel Natural Park, a protected area declared a Special Bird Protection Area and part of the Natura 2000 and RAMSAR Network. This swamp has a great variety of birds from northern and central Europe. 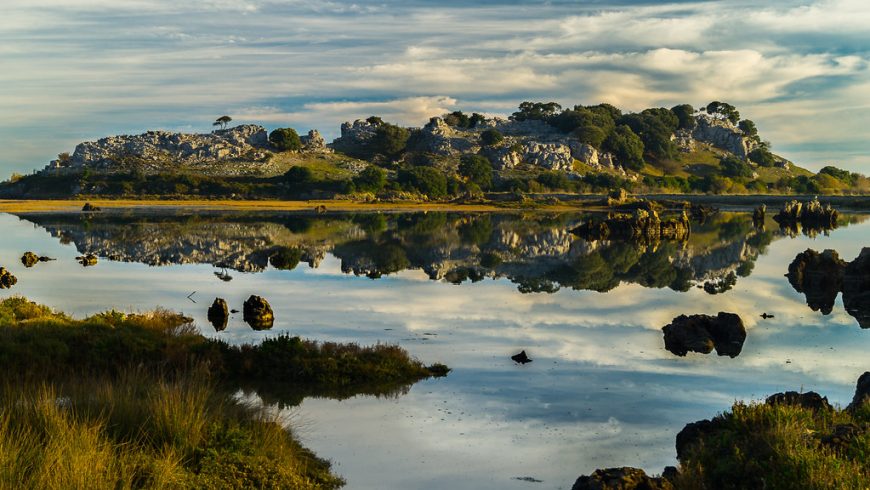 Our green tip: avoid using your car and use public transport to visit these places. 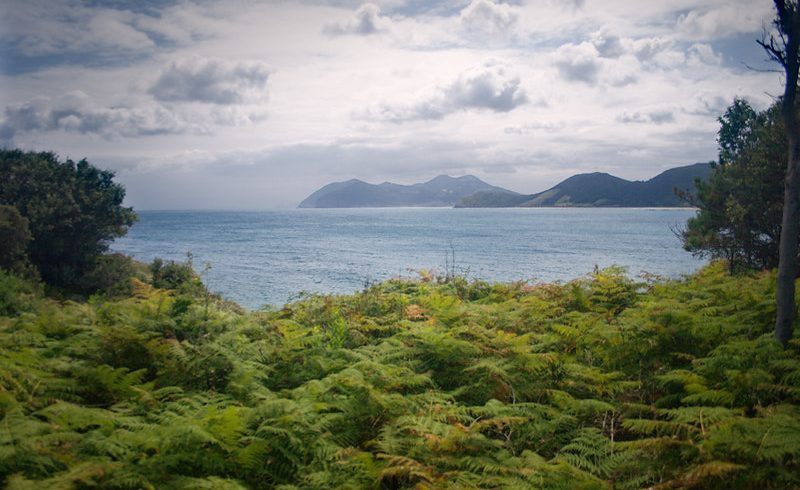 The path along the coast

This route is known as “Sendero Azul” is a 2-kilometer route that connects the beaches of Ris and Tregandín.

During the itinerary, you can see the most idyllic landscapes of Noja such as beaches, caves, and islets, including Peña Pombera. Likewise, you can discover cultural, artistic and historical beauties, such as an artillery bunker or the Hermitage of San Pedruco.

The “DeSEO Discover” association, created with the aim of enhancing the resources of Noja, offers various guided tours that cross the swamps, countryside, dunes, and landscapes, with the aim of bringing tourists closer to nature and carrying out dedicated activities to ornithology. To carry out ornithology activities, the organization makes binoculars and exemplary guides of the birds and natural environment of Noja available to tourists.

Our green tip: Be aware of the rules and follow the marked trails to reduce the environmental impact.

If you want to organize a responsible trip to Noja, look for accommodation committed to respecting the environment, places, and the local community. On Ecobnb you can find a selection of ecological or eco-friendly accommodation near Noja, such as the eco-friendly hotel La Charola which offers a breakfast based on organic and local products, uses ecological detergents, and separates over 80% of waste. 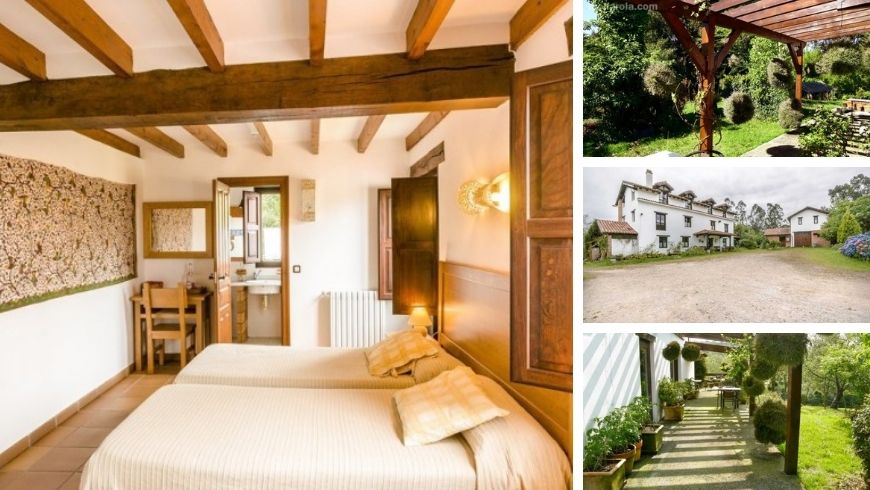 The town of Noja enjoys a great gastronomic variety thanks to its geographical position where there are both animal, vegetable, sea or land products. If we have to choose a product that stands out from this great variety, we select crab. Similarly, within its gastronomy, you can also enjoy other seafood products such as sardines, various red meats, vegetables, and fruit, highlighting the fruits with which a fruity wine called Cantabricus is produced.

Finally, we must not forget that you can also enjoy traditional Cantabrian dishes such as mountain stew or rich desserts such as Perlas de Noja. 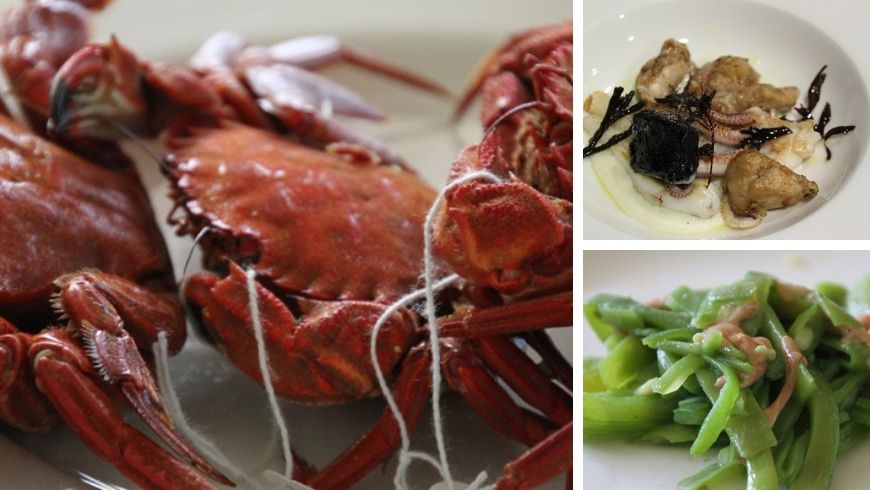 Our green tip: Try the local gastronomy, you will help the community and you will taste the typical products of the place.

Noja is on the list of the 100 most sustainable destinations in the world, which the Green Destinations platform selects and awards every year. Access to this list was obtained thanks to the Quality Coast Silver 2014 award, assigned by the Coastal and Marine Union of the European Union, to reward the new environmental policy measures that were being developed within the city of Noja in defense of its coasts.

Finally, if you are passionate about sports, you should know that this municipality has a wide range of sporting activities such as surfing, canoeing, or hiking.

Did you know this sustainable Cantabrian destination? If you’ve read this article, it definitely made you want to learn more about Noja. Get ready to get to know this paradise! 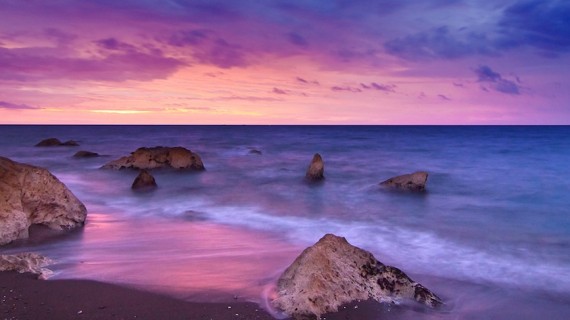 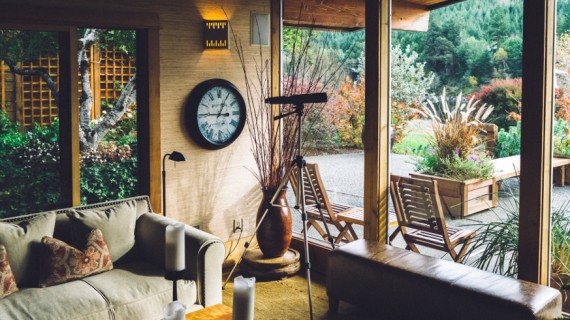 Autumn is a mild season in which you can enjoy days, the calm and the nature. Chlorophyll green colors, yellow and orange tones and shades that stained the floor of red and magenta. Thus autumn leaves are presented to us, as a natural brush that colors our forests to make them look beautiful paintings. Let’s find […] 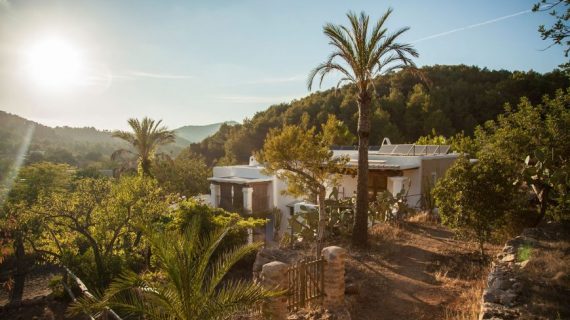 Green Spain: 10 houses surrounded by nature where you can escape the hustle and bustle of the city