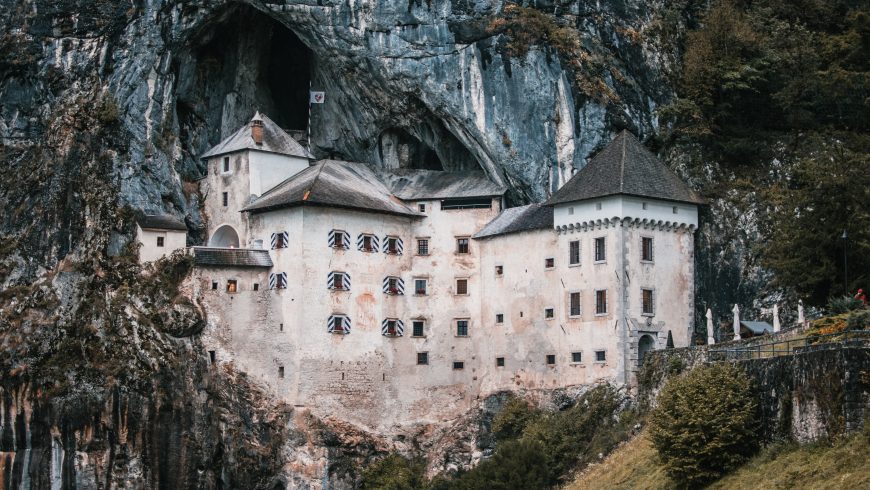 The Castle of Predjama, built around 1200, is located a few kilometers from the Postojna Caves. It stands right at the entrance to a network of karst tunnels, on a 123-meter high rocky wall. The stronghold, directly adjacent to the mountainside, is about 9 kilometers from the city of Postojna. Predjama Castle is an intertwining of man’s work and the creativity of nature. It is one of the most famous Slovenian castles and, unique in its kind, it is among the ten most fascinating castles in the world.

This is the only castle in the rock in Europe and it is the largest cave castle in the world. It looks like a fairy-tale castle, embraced by rock. But the part of Predjama Castle that most fascinates visitors is the cave behind it.
The castle is open to the public and the visit allows you to discover many original pieces. You can discover the charm of medieval life. Visit the living room, the kitchen, the chapel, the prisons, and the torture room. The attic of the castle offers a wonderful view over the valley and houses a rich collection of medieval weapons and armor, from spears and halberds to swords, hammers, bows, and crossbows. 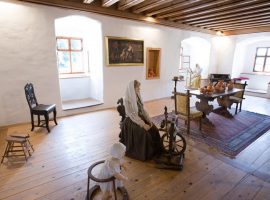 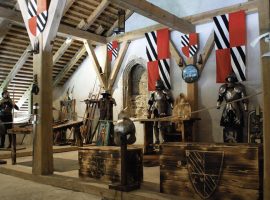 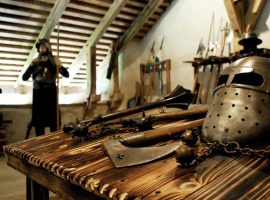 According to legend, the rebel knight Erazem of Predjama used tunnels and secret passages behind the Castle for his supplies. And thanks to these tunnels he withstood for more than a year to the siege of the imperial army. Erazem of Lueg is the most famous inhabitant of the castle, and he is an essential part of the history of the Castle. Although brave and almost invincible, Erazem died while he was in his personal bathroom after betrayal by his servant.

The Castle of Predjama every summer in July becomes the stage of the Erazem tournament of chivalry, during which knights, archers, and swordsmen show off their fighting skills. In this period, the village and inhabitants dress up in medieval clothes. 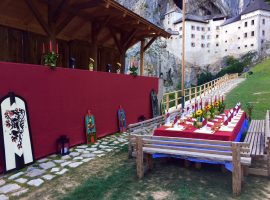 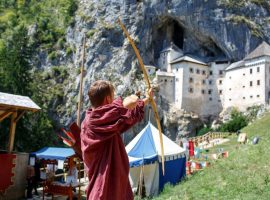 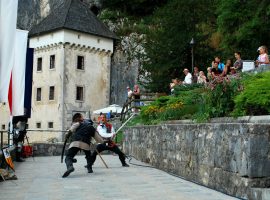 The second-longest tourist cave in Slovenia

The cave under Predjama Castle is the second-longest cave in Slovenia and extends over four floors. In summer you can visit the underground cave with its 14 km in length. The tourist section, open to the public, is 700 meters long and includes the Stables, the Main Passage, the Cave of Names, the Great Hall, and Fiženca where the access to the surface is located. Inhabited since the Stone Age, the cave also hides Roman artifacts. There is no electric lighting inside the cave, so the visit takes place with torches. Comfortable clothes and shoes are required to visit the tourist part of the cave. 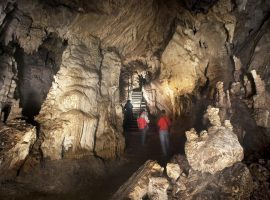 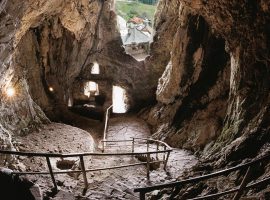 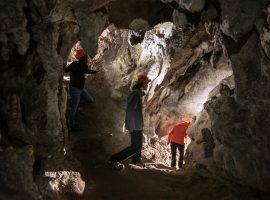 For the more adventurous adrenaline lovers

The bravest visitors, adequately prepared, can visit the Erazem’s and Eastern Passages. They can also participate in a guided tour of the Wind Hole. The most adventurous visits are for those who want to visit the parts of the caves normally closed to mass visits, to experience the most difficult passages, cross the water barriers and try the experience of caving. These visits are possible on reservations for small groups, accompanied by qualified guides, and are divided into different levels of difficulty. In the winter period, the cave offers shelter to a colony of bats and, therefore, during their hibernation the cave remains closed to the public. 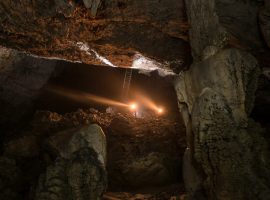 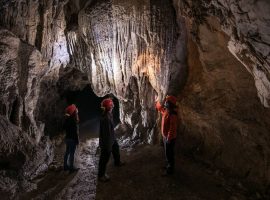 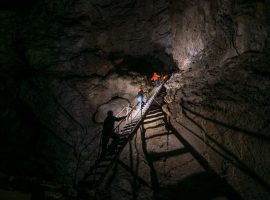 The Castle, inspiration for movies creators

Predjama Castle was the scene of filming of the documentary and cinematographic movies. Additionally, the Discovery Channel staff also discovered the presence of spirits. 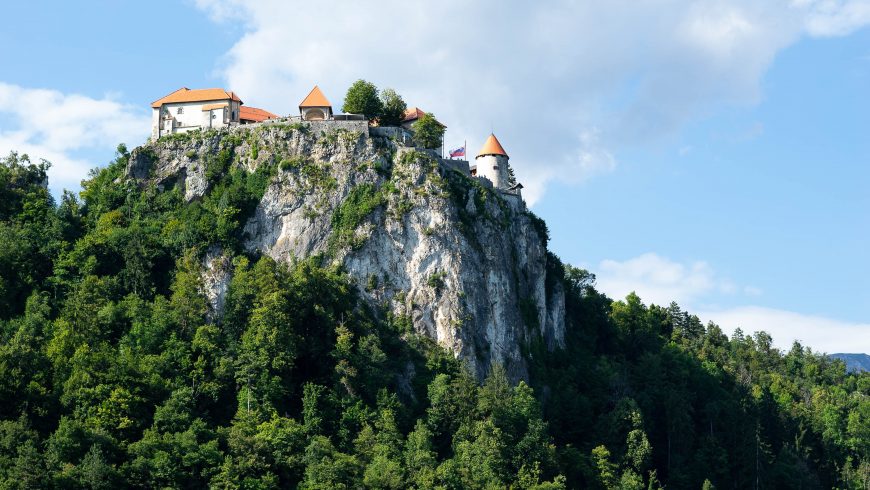 Photo by Joseph Gilbey on Unsplash

Bled Castle is one of the most famous Slovenian castles and it is the oldest castle in Slovenian territory. He was named for the first time in 1011, in an act of donation with his name in German form: Castellum Veldes. The castle, symbol of Bled and Slovenia, located on a very steep and imposing cliff at 130 meters, dominates the Lake Bled. The image of the castle above the lake, with the romantic islet and the church, is the characteristic of Bled known all over the world.

Many eminent travelers have spread the fame of the beauty of Bled and its castle; for example Janez Vajkard Valvasor and his Glory of the Duchy of Carniola of 1689. Bled, thanks to its favorable position, in all historical periods has been the scene of diplomatic and protocol meetings at the highest levels. Important statesmen visited Bled Castle and enjoyed its unique panorama.

The castle buildings are arranged around the courtyards on two levels, the lower and the upper ones. In the past, on the lower level, there were the service buildings, while on the upper level there were the houses. During the summer, the castle courtyard hosts numerous cultural events, including the medieval historical recalling. 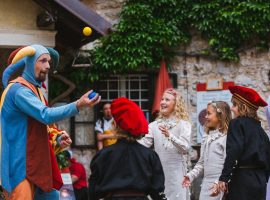 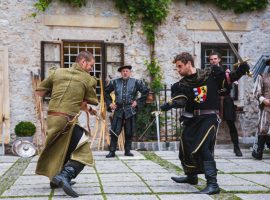 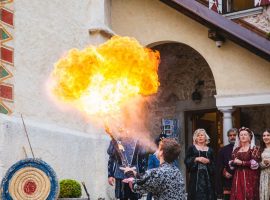 In the lower courtyard, there is the well carved into the rock, 12 meters deep. There is also the Stolp gallery which houses exhibitions and the room dedicated to the museums of the Gorenjska region.

In the building for servants in the courtyard below, there is the castle printing works with a reconstructed Gutenberg’s printing machine.

The upper courtyard houses the museum, in the baroque part of the castle, which illustrates the history of Bled.
In the museum of the castle in a showcase, there is the Bird of Paradise, a peacock-shaped brooch, one of the most beautiful findings of the 6th century. According to tradition, the peacock is a symbol of life and wealth, so much so as to populate the Garden of Eden. 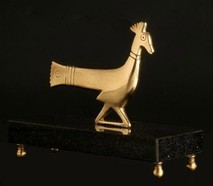 The cellar attracts visitors with tastings of its top-quality wines and a demonstration of bottling of wine from oak barrels.

Visitors to the upper level can also see the Gothic chapel, built in the century XVI. The chapel is dedicated to the bishops St Ingenuin and St Albuin. Inside there are interesting frescoes; on the sides of the altar, there are the images of Emperor Henry II and his wife Cunegonda.

The legend of the castle widow Poliksena

Around the year 1500, the administrator of Bled castle was Hartmann Kreigh. He was not a good owner and the farmers rebelled against him by resorting to the bishop and the king. One day Master Kreigh suddenly disappeared, maybe killed by brigands. Perhaps the farmers had done justice on their own, but we’ll never know.
The widow Poliksena remained crying at the castle. She was a very sad widow, who in memory of her husband, took all the gold and silver in her chests and melted a small bell for the chapel on the Bled island. During transport, a storm broke out, and the boat with the boatmen and the bell sank. Poliksena abandoned the castle and became a nun in Rome. After hearing his tragic story, the Pope melted another bell and sent it to the island. 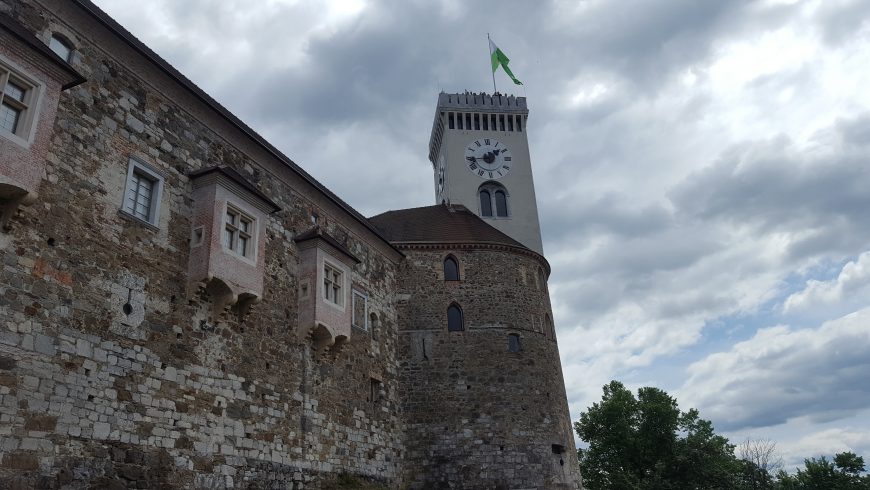 Among the most famous Slovenian castles, we find the Castle of Ljubljana. It stands on the hill above the city and is one of the symbols and major attractions of the city. Ljubljana Castle, built around the 11th century, is located on one of the most beautiful viewpoints. In the beginning, it was a defensive structure, today it is used as an important place of attraction and culture.

The viewing tower, which is also the highest point in the city, is exactly 400 meters above sea level. Climb the observation tower and enjoy the most beautiful views of Ljubljana and its surroundings at 360 degrees.

The original entrance was on the north side of the Castle. The municipal players, every day at 11 on the corridor that surrounded the tower, trumpeted by three trombones and a cornet. The players also played the role of city fireguards. When they saw a fire, they hung a red cloth during the day and a lit lamp at night. 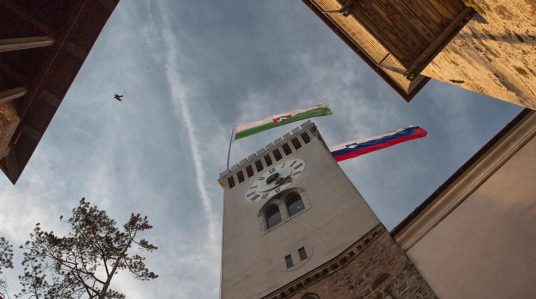 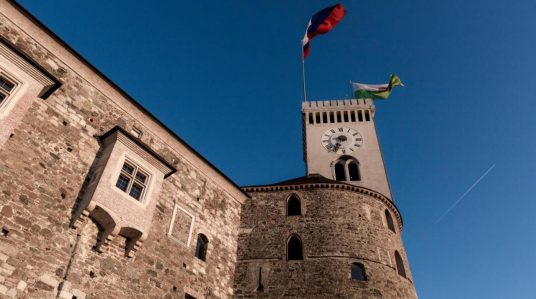 The seventeenth-century Gothic Chapel of San Giorgio houses heraldic paintings. Try to look up, it will seem like you are traveling back in time when the aristocracy dictated the law, and for the honor, people fought and died.

Ljubljana Castle has a dark side that still hides where, in the past, there were prisons. Visit the permanent exhibition “Penitentiary” if you want to know what happened and why people ended up there.
The exhibition, located in the penalty cells, illustrates the role of the penitentiary in the nineteenth and early twentieth centuries. The spaces, narrow and gloomy, with doors and grilles, presented in the first cell, is a prototype of the other cells. The second and third cells accommodate the chronological presentation of the penitentiary phases. In the fourth cell, there are prisoners, who appear in virtual reality (hologram). Observe the prisoner in solitary confinement through a small hole in the door and listen to the names of the prisoners. You will have the impression of being in contact with real people and events. 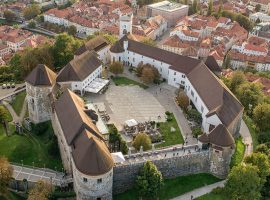 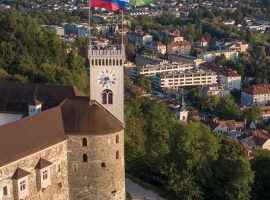 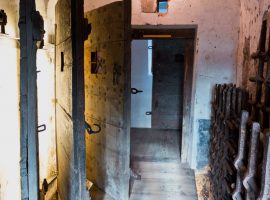 The exhibition illustrates all Slovenian history from the oldest traces of human presence in the Slovenian territory of around 200 000 years ago.

In the museum, there is a permanent exhibition presenting the history of puppets in Slovenia, as well as the creation of modern puppeteers, set up by the Puppet Theater. 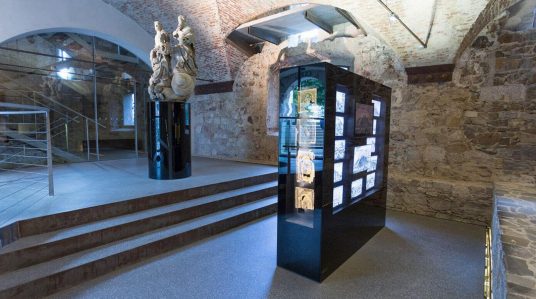 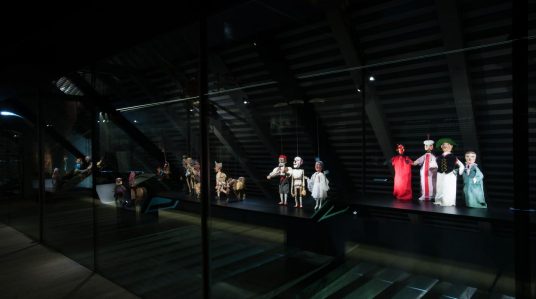 Slovenia is rich in extraordinary human creations. Take part in some virtual tours of the most incredible Slovenian castles. So you can plan a future visit. 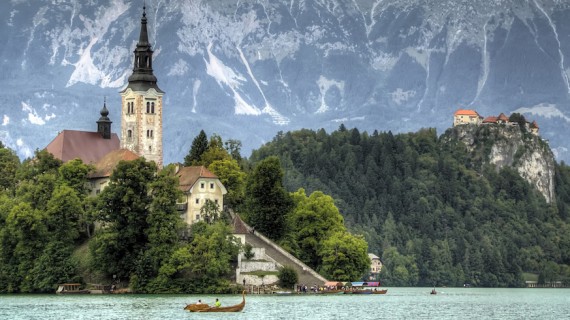 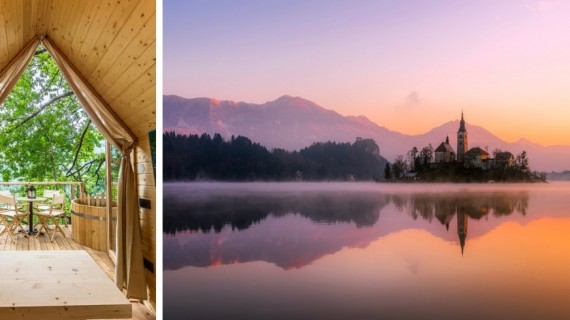 Captivating and stylish eco-tourism. This is what you can find at Hotel and Glamping Ribno, a stone’s throw from the alpine pearl of the Bled lake, Slovenia. With a perfect combination of relaxing and wandering, an eco-friendly and zero waste stay. Discover it with us. Slovenia often comes to mind when thinking about a full […] 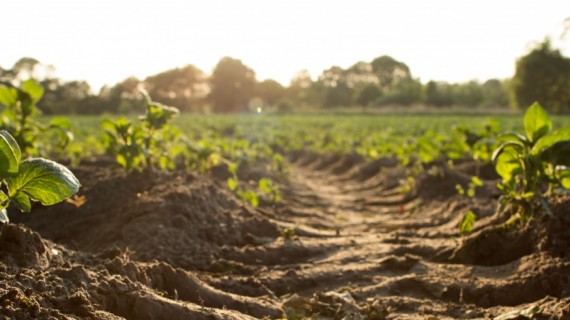 Exploring Bled and its surroundings: discovering a local farm’s specialties

The small town of Bled and its lake are one of the must-sees during your trip to Slovenia. And just a few kilometers away you’ll find a whole new world, one far from the spotlights and made of lush green hills, farms and local traditions. Slovenia wins the golden medal for sustainability in the global competition. It’s for sure […] 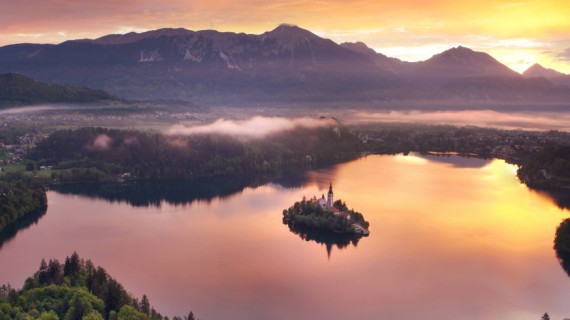 Bled: 9 things not to miss in the Pearl of Slovenia

An atmosphere, frozen in time, among snow-covered peaks and quiet landscapes. A romantic castle on the mountain, where ancient myths and modern soap-operas take place. A boatman tells us the stories of the place while paddling towards the enchanted islet in the middle of the lake. Bled is the perfect destination for green tourism, and […]