As there is no sea on the horizon, you may wonder how this tiny, landlocked European land could acquire the name “the Country of Waters”. It’s, due to the underground cave system spreading across the country that holds vast amounts of thermal water. The capital city, Budapest, has no less than 123 springs, that are supplying the most famous thermal water spas of Europe.

Imagine sitting outdoor, in naturally heated, healing water, after a day of sightseeing on a cold autumn day. Going to one of the thermal spas, 1-2 times a week as a resident in Budapest is not surprising, but part of the culture. Enjoying the curating water, playing chess in the pool on floating boards, soaking in “beer baths” or going to a “Sparty” in the Széchenyi Spa on a Saturday night is all possible due to the natural water resources of Hungary.

What exactly is thermal water? 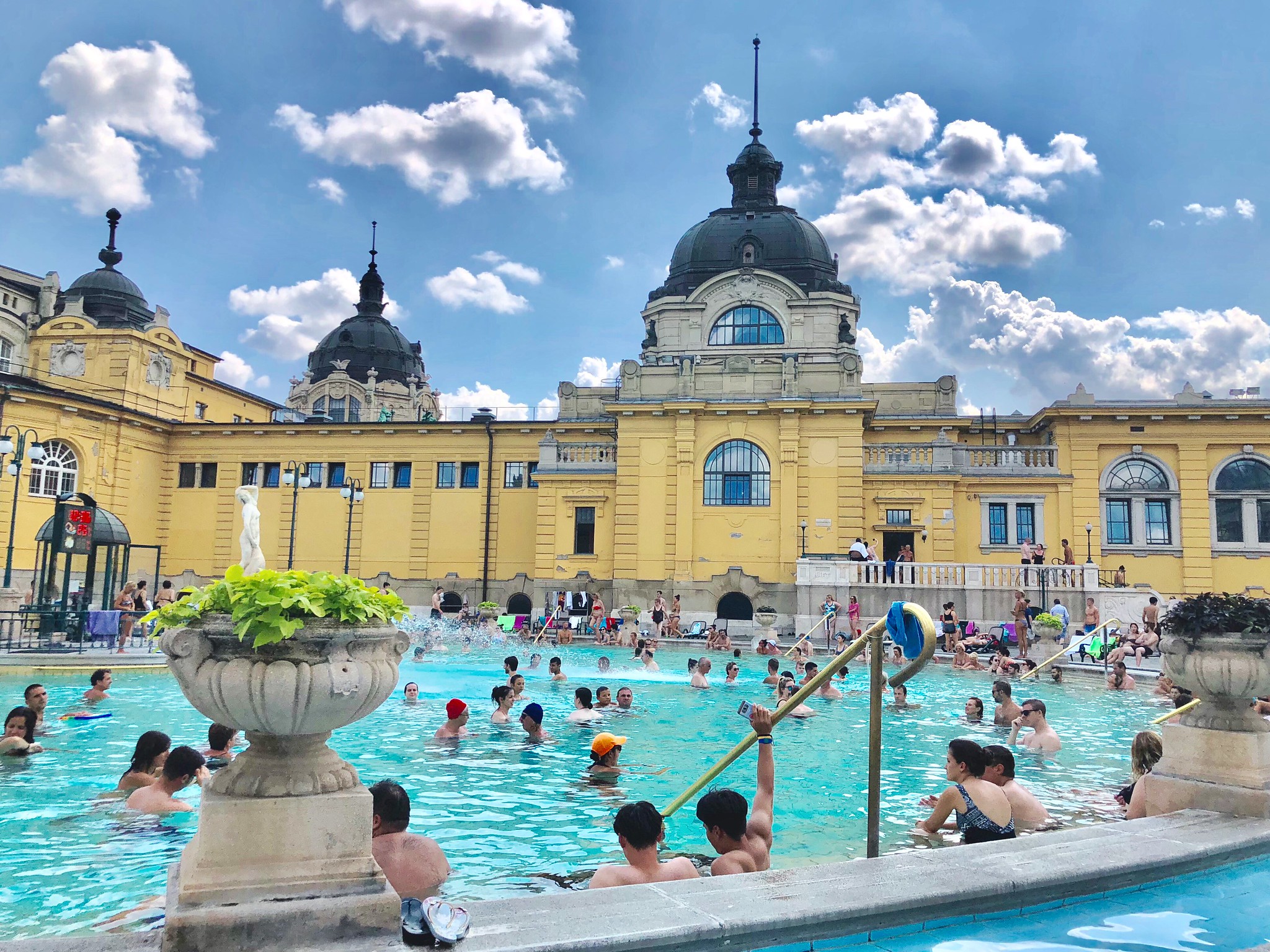 Since Roman times, the residents have been continuously exploiting this natural gift of geothermal water and created a stunning spa culture around it. The relatively thin layer of the earth’s crust in the Carpathian basin has enabled the broiling upper mantle to heat up this groundwater that is rich in minerals. It is said that these naturally heated waters have plenty of healing properties. Among others, it is easing blood circulation issues due to the high dissolved mineral content or has benefits to joint problems thanks to the water’s buoyancy.

The most prominent examples of the bathhouses in the capital

The largest natural thermal lake in Hévíz, ph. via pxhere

Over the years, dozens of bath complexes were established in Hungary, in fact, more than in any other European country. Among others, in Hévíz, where the largest natural thermal lake in the world is located, that spreads for 4 hectares.

Let me introduce now some of those spas you can enjoy while exploring Budapest and inspire you to try some of these indulging spa experiences. 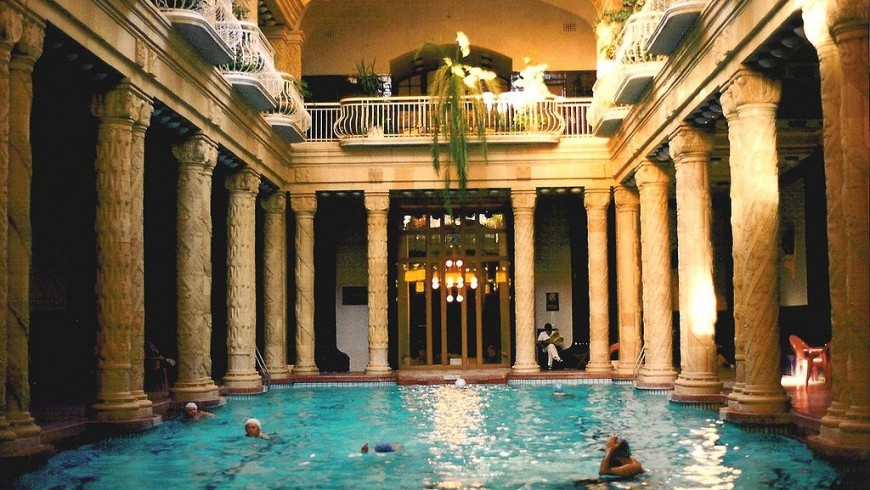 One of the greatest places is the amazing Art-Nouveau styled Gellért Bath with its marble halls and walls decorated with the world-famous Zsolnay porcelain. Some of the unique experiences that this spa is offering are the exclusive thermal pool infused with healing herbs or the optional chocolate massage. There is also live music playing from the gallery while you are dipping into the pool, that stimulates all your senses. The beauty of the architecture, combined with the calming spa environment, has inspired several moviemakers as well. The halls of this building from the 1920s have served as the set of some classic movies, like the Evita (1996) or Mephisto (1981). Info and prices on the official website. 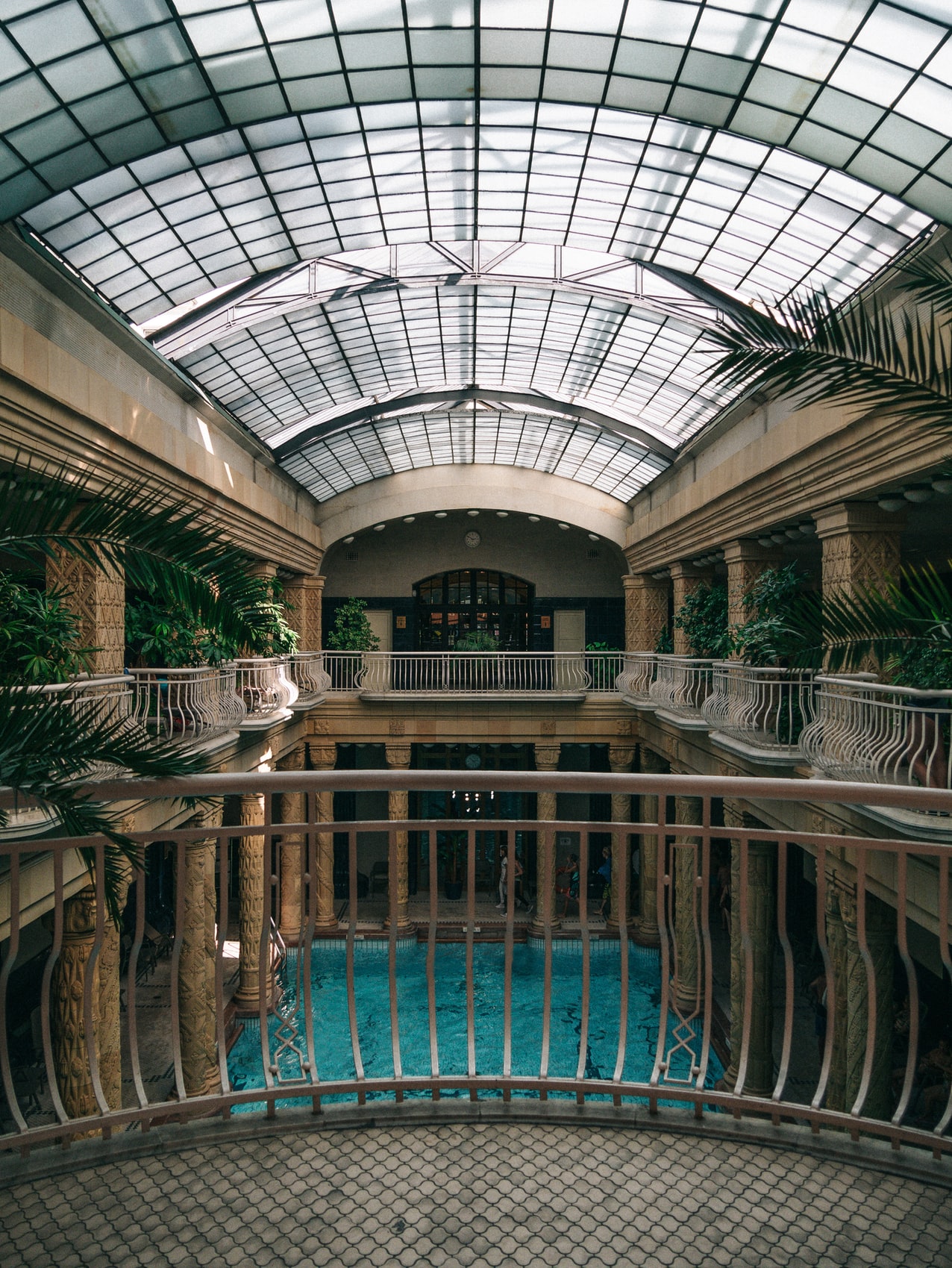 The Széchenyi Bath is situated in a castle-like building, right in the center of the city and opened its gates in 1913. The thermal water that supplies this spa breaks to the surface from a depth of 1246-meters, at a temperature of around 76 degrees in Celsius. Due to its composition, it’s considered as ‘medical water’. During the summer period, the bath also hosts club nights, aptly named ‘Sparties’, to attract more of the younger generation with the hope to familiarize them with the modern bath culture. This seems to be successful, as the number of guests has tripled in the past years, so the complex employs around 1100 workers today. Info and prices on the official website.

Outdoor swimming pool of the Széchenyi Bath in Budapest, Hungary, ph. by Andorka, via wikimedia

Some of the first bathhouses of Hungary are from the 16th century. Those were built during the 150 years of Hungary’s occupancy by the Ottomans. These baths houses are characterized by central, octagon-shaped pools, under high, domed ceilings, that will most probably give you an authentic feeling. 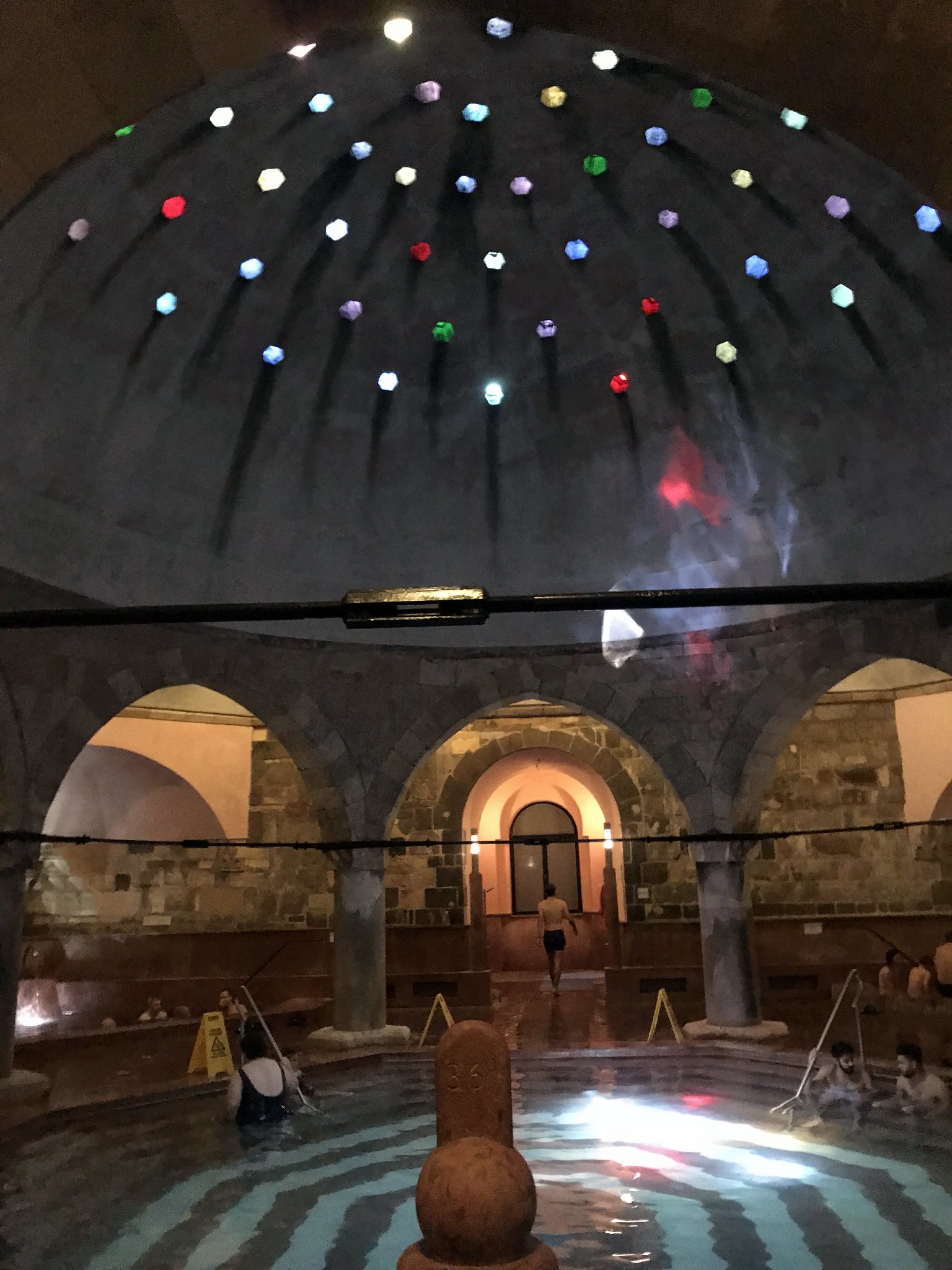 Close encounter with the secret subterranean world for the courageous ones 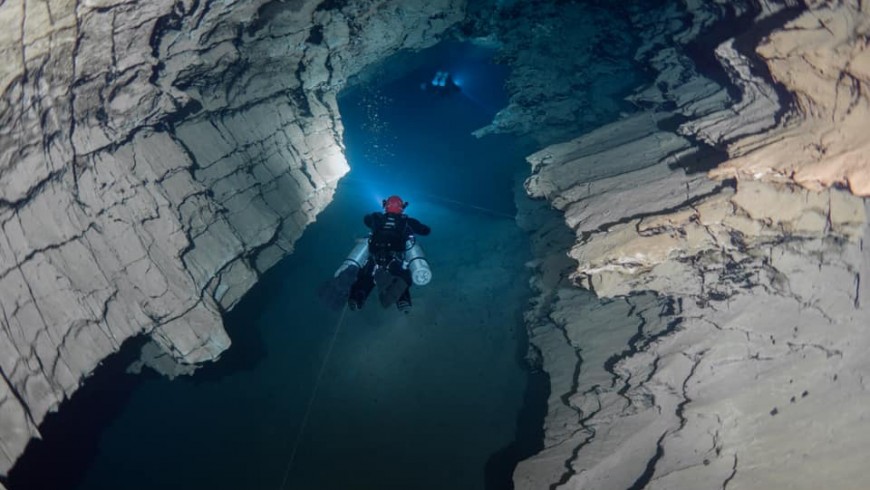 There’s also an excellent option for those visitors open for a real adventure, ready to discover a secret underworld by diving into the most impressive thermal cave system in the world. The Molnár János cave is located right underneath the place where the first Turkish baths were established some hundreds of years ago. The Lake Mill (Malom tó) has been used to power mills since the Middle Age.

However, only in the 19th century a pharmacist, János Molnár started to explore its dry areas and analyzed its water. The underwater exploration began in the 1950s in this protected area when divers have mapped out more than 400 meters of cave systems. Quite recently, in 2002 researchers have found a new passage that leads to a spectacularly large hall, as big as 350 double-decker buses. Even if geologists, biologists, and chemists are still working permanently in the naturally warm, 22-26 °C water, yet certified cave divers are allowed to dive and discover the crystal-clear water.

Researchers have also discovered three new subterranean species in theses caves, living exclusively in this still water and under this unique atmosphere down there.

While Budapest is more popular than ever, a record number of tourists have visited the capital in 2018 for its architecture, historical background, and gourmet restaurants. The government is, however, eager to attract a more specific sort of visitor, the ‘health tourists’. The aim is to raise the GDP, especially the portion related to tourism from 10 % to 16% by 2030, by mainly relying on this particular sector, since the balanced, more health-conscious lifestyle started to gain more popularity all around the globe.

The continuous maintenance of these historical baths and the protection of well-preserved water resources help the country to gain benefit from its nature. Environmentally responsible behavior also includes recognize possible holiday destinations, that were built, not at the expense of the natural environment or the community, but locations that are cultivating and flourishing them. You, as a conscious tourist can be confident visiting any of the spas mentioned above or caves, you will not only experience the centuries-old culture, but you will support the local government in its attempt to develop the green-minded tourism, and invest into the protection of Hungary’s natural resources. 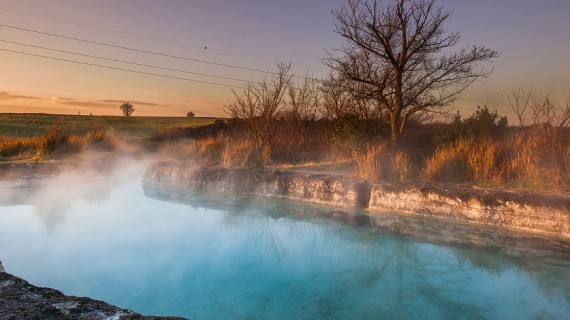 One of the first thoughts that arise when we think about thermal spa it is definitely the price of the service, since various hot springs have been acquired by private companies that have built around exclusive factories and activities. Not everyone knows that you shouldn’t necessarily face high costs to enjoy the benefits of thermal […] 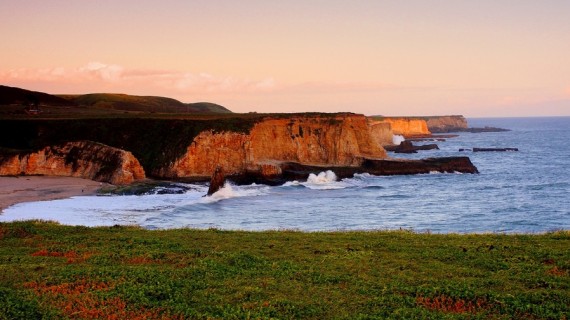 10 best green-hotel not to be missed in California

California is a state rich in unique places: magnificent beaches, populated by courageous surfers ready to bravely ride the waves, but also from placid sea lions dozing in the sun, colored cliffs overlooking the Ocean, beautiful pine and sequoias forests, but also wide vineyards, carefully cultivated around green hills, and of course, the vibrant metropolitan cities […] 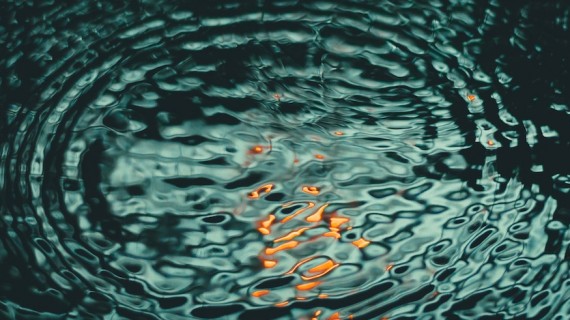 Anti-inflammatory actions, a cure for dermatitis: thermal waters are synonymous with health and well-being, as the ancient Romans already knew. We went around Italy to discover magic places, natural thermal bats or beautiful spa facilities nestled in nature, among unforgettable landscapes and we again witnessed that Wallace J. Nichols was right when he wrote that water is […]

From north to south, Italy offers endless possibilities for relaxation: wild hot springs, natural pools and thermal parks, ideal to regenerate body and mind. The amazing thing is that some of these havens are totally free. Many of Italy’s natural hot spring has been tapped by spas, but if you take a tip from a […]