At the foot of the Berici Hills, where two rivers cross, there’s Vicenza, a UNESCO World Heritage Site. Known for Palladio’s architectural masterpieces, this pearl in the Venetian Plain hides thousands of surprises. Here’s the 10 reasons to choose Vicenza as your next destination!

Vicenza is built on the remains of an ancient roman camp. The typical streets that meet at right angles are still the basis of the urban plan of the city center. The characteristic porticos (covered walkways) line the side of the main street, Corso Palladio, and hosts many historical and modern shops and bakeries. It’s an important productive center, made mostly of small and medium-size businesses; in particular, in the engineering, textile and gold sectors. The city is the only Italian municipality that received two Gold Medals of Military Valor, the highest Italian recognition for gallantry in war. Vicenza played an important role both during Italy’s Independence Wars (mid 19th century) and the Italian Resistance in WWII. 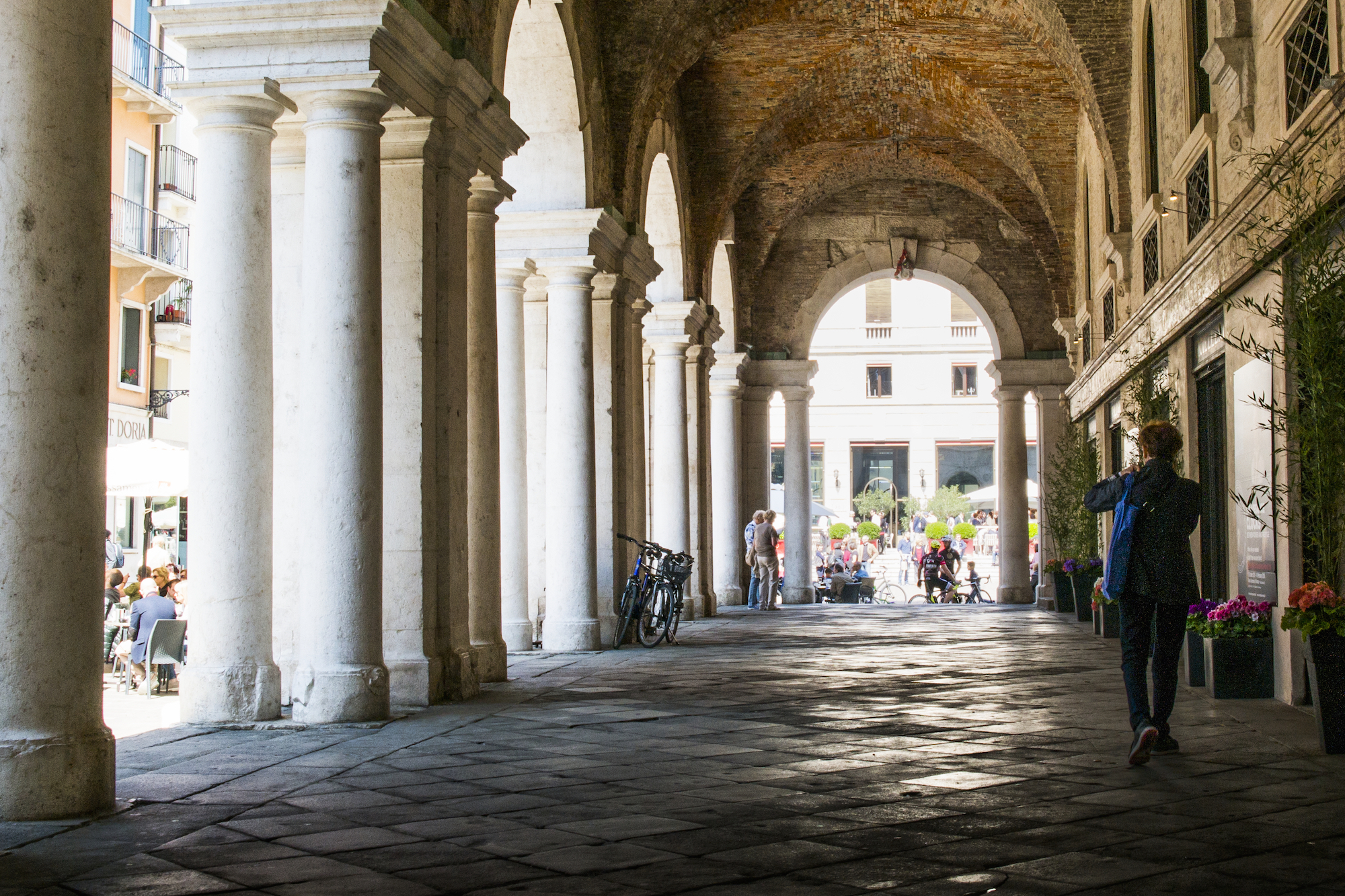 Both under summer’s sunshine and in winter nights, a stroll in the city historical center’s streets will offer you thousands of unexpected glimpses. We chose the top 10 reasons to fall in love with Vicenza: don’t miss it!

1. The City of Palladio 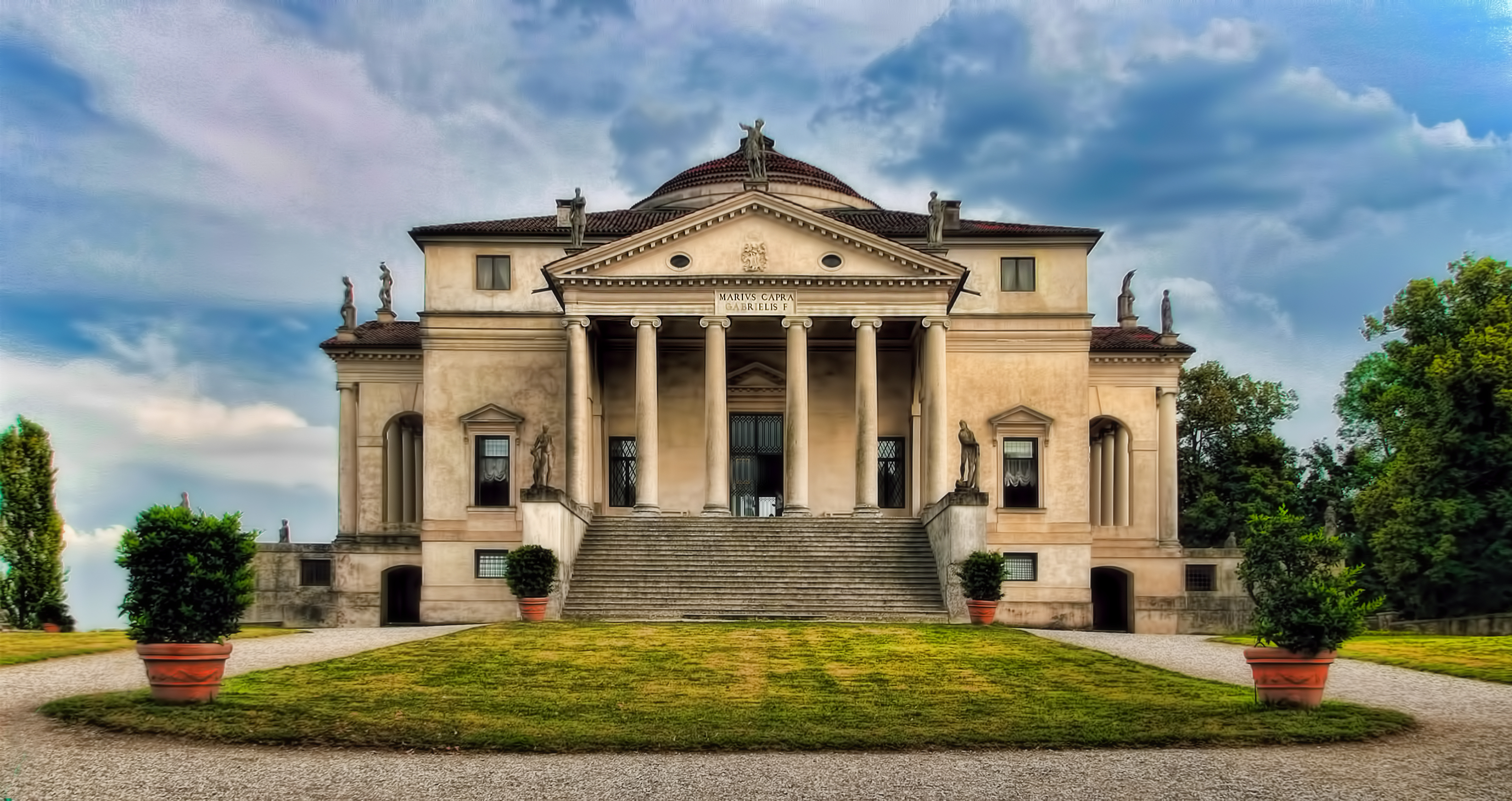 Vicenza is known also as “The City of Palladio”, because the late-renaissance architect redesigned the look of the city center and of its entire province. In the countryside, the local lords commissioned to the architect of Padua the building of their villas. The most famous and copied, in Italy and abroad, is Villa Capra, known as “La Rotonda”. Not far from the historical center, this UNESCO World Heritage Site is in perfect harmony with the surrounding landscape: countryside, woods and the hills of the Riviera Berica. 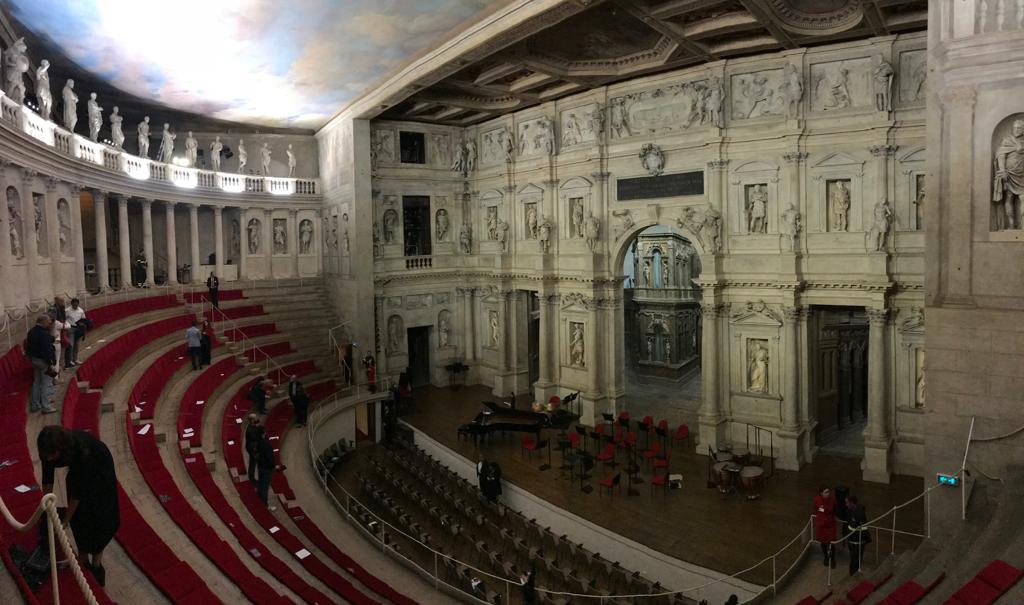 The Olympic Theater of Vicenza, photo by Anna Paulon

A few steps away from Ponte degli Angeli, a bridge in the middle of the city center, there’s another work of the Venetian architect. It’s the Olympic Theater, the first closed theater in history. However, the ceiling painted with frescoes of a clear sky is overshadowed by the stage. It is a masterpiece in the use of the perspective. The fixed scene representing Thebes seems to stretch to the infinity in the streets of the ancient Greek city, but it’s not longer than a meter! It’s easy to understand why it’s part of the UNESCO Heritage since 1994, though! 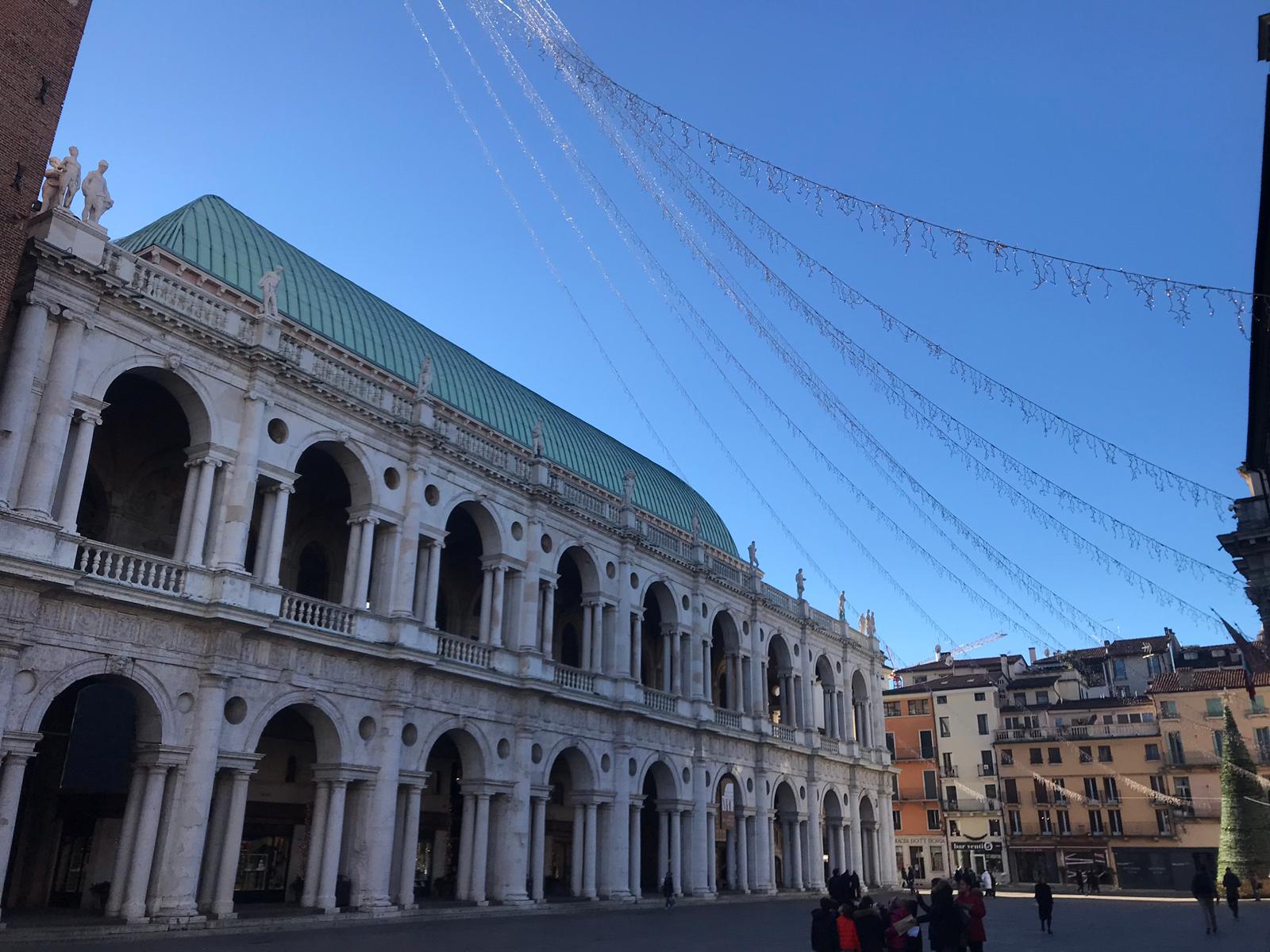 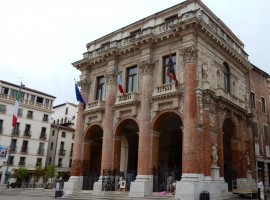 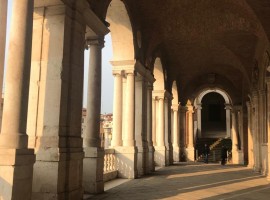 The loggia of the Basilica, photo by Anna Paulon 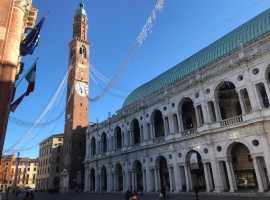 The square, the Basilica and the Bissara Tower, photo by Anna Paulon

The biggest, most famous and beautiful square among the several of the historical center, is Piazza dei Signori. Lively cafés, noble buildings and historical monuments overlook the wide rectangular square. The most important one is the Basilica Palladiana, a UNESCO World Heritage Site. Andrea Palladio, back then a still unknown architect, rebuilt the old Palazzo della Ragione covering the previous structure with loggias and “serliane” (Palladian windows) made of white stone. The Basilica was renovated many times after the serious damage caused by a bombing of the Allies in WWII. Another building signed by Palladio that overlooks the square is the Loggia del Capitaniato, a UNESCO World Heritage Site too.

3. The city’s art gallery on the river 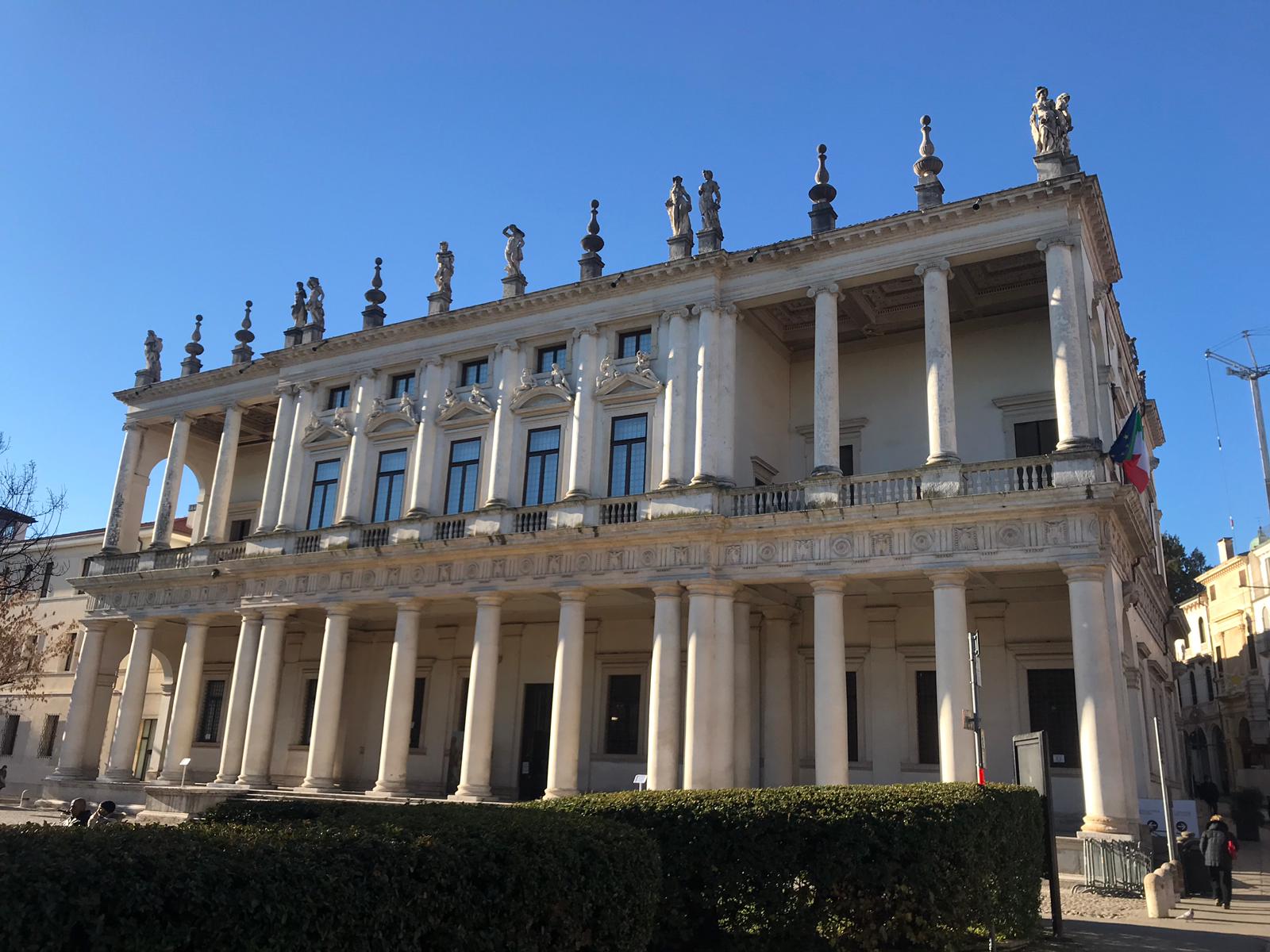 Palazzo Chiericati, was a project of Andrea Palladio for the Chiericati family, but the construction ended only at the end of the 17th century. It’s a part of the UNESCO World Heritage and is located in Piazza Matteotti, in front of the Olympic Theater. Back then, it was still called Island’s Square, because it was surrounded by the two rivers of the city, River Bacchiglione and River Retrone. It’s one of the city’s museums, with collections of paintings and sculptures. In the art gallery, you can find works of Tintoretto, Veronese and Van Dyck. Inside the palace, there’s also Neri Pozza’s bequest, the founder of the publishing company. 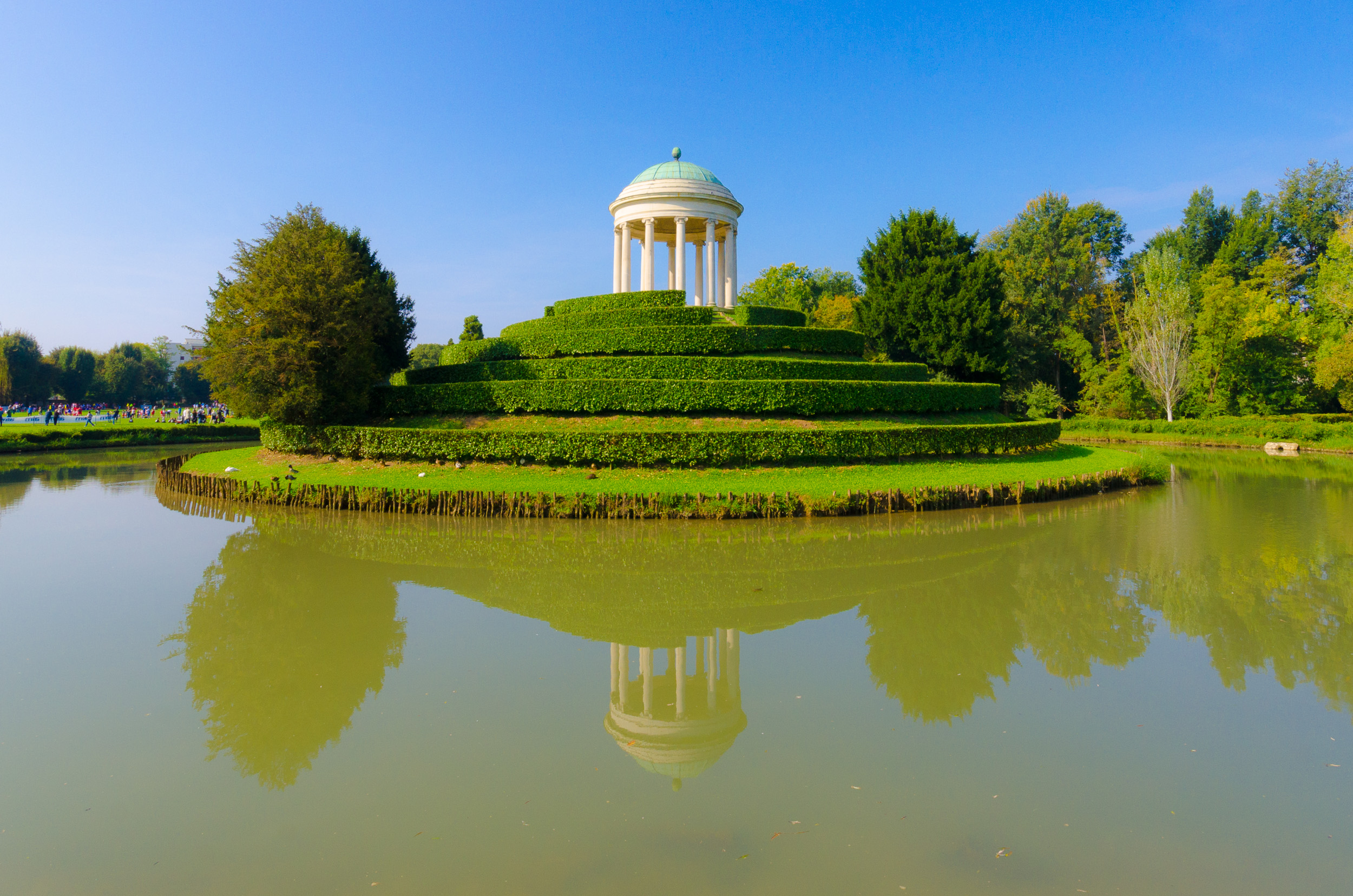 Parco Querini takes its name from the close palace that belonged to the Querini family. It’s a large public green area in Vicenza, more than 120,000 m2 just in the middle of the historical center. You can stroll along the tree-lined walk with classical statues or jog on the external path, following the fitness exercises proposed. In the middle of the park, there’s a pond with a neo-classical temple, but people can’t go on that little island. People of every age love spending their Sundays afternoons in the park, having picnics, playing Frisbee, exploring the wood or playing with the several barnyard animals that live there.

5. One thousand and one churches 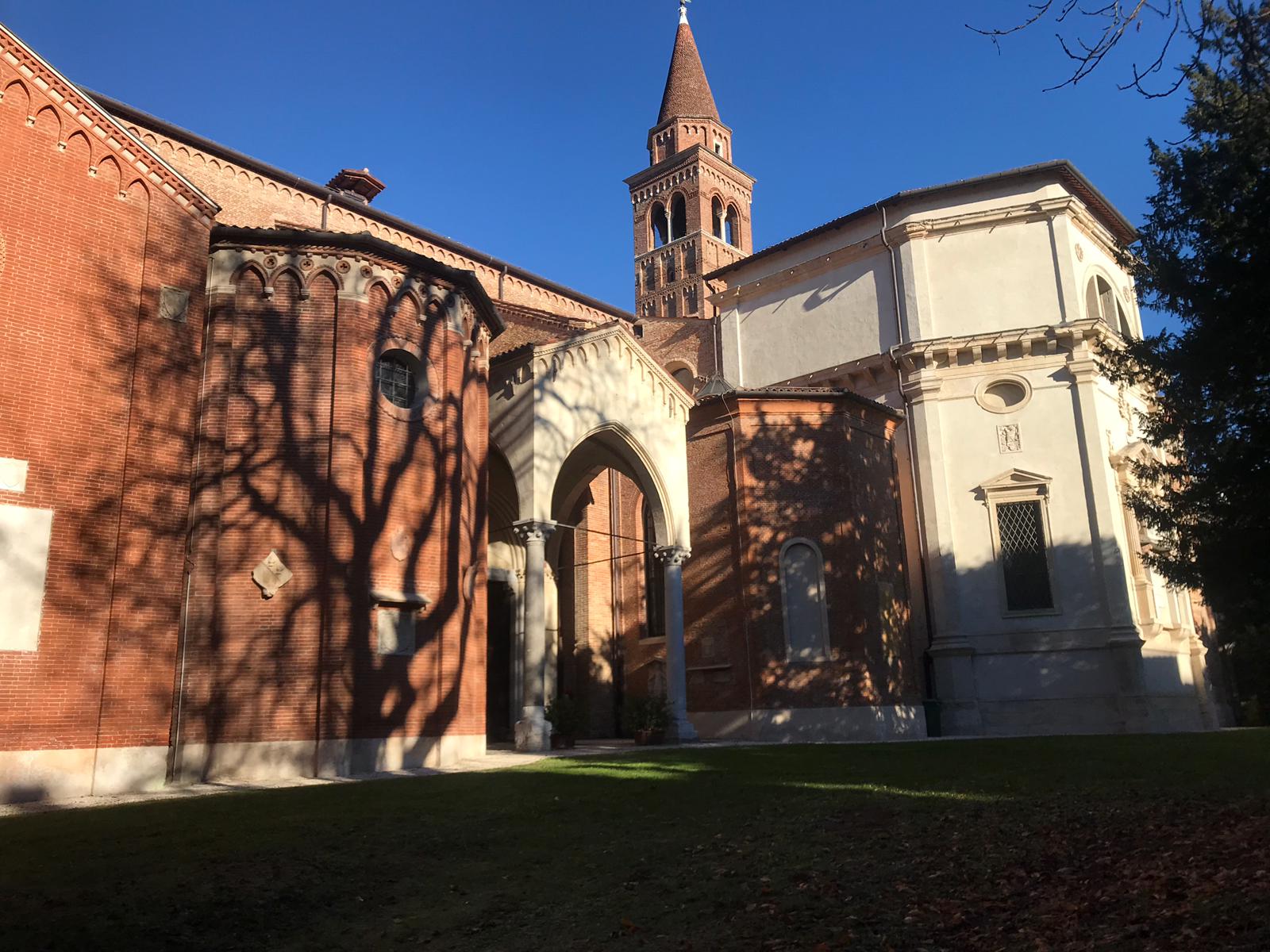 As many other Italian cities, Vicenza too is full of churches of every historical age and artistic style. The Cathedral of Santa Maria Annunciata, called by the people just “Duomo”, was originally an Early Christian church, but was rebuilt many times and the dome was one of Palladio’s projects. The Basilica of Santi Felice e Fortunato, a Romanesque building, is a former Benedictine Monastery just outside the city’s walls. On the contrary, the Dominicans managed the Church of Santa Corona, built in the mid-13th century, and now the seat of the city’s Natural History and Archaeological Museum. Religiously speaking, it’s important because it keeps the relic of the Holy Thorn of Christ’s crown; that’s where the church takes its name. Artistically, among the many paintings preserved in the chapels, the most famous is the Baptism of Christ by Giovanni Bellini, one of the major painter of the Venetian current.

6. Monte Berico and the view of Vicenza 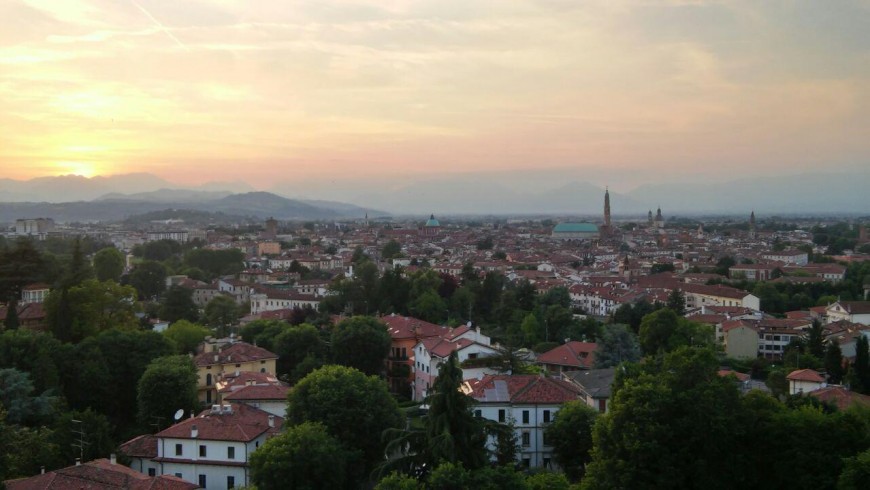 View of Vicenza at sunset from Monte Berico, photo by Eleonora Frasson 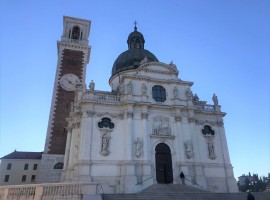 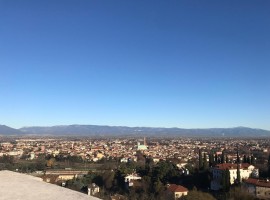 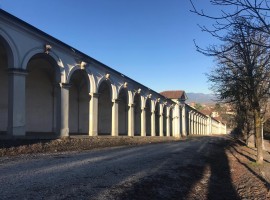 The porticos going up the hill, photo by Anna Paulon

One of the most loved place in the city is the forecourt of Monte Berico, from where you can enjoy a wonderful view of the city and surrounding countryside. You can reach it through the “Scalette”, almost 200 steps that connects the city center with the top of the hill. There, you can find the Sanctuary of the Madonna di Monte Berico, the Saint Protector of the city. In the front, there’s Piazzale della Vittoria, from where you can see the city expanding at the foot of the hills. At night, the view of the lights is priceless, especially during Christmas time. Near Monte Berico, there’s the Risorgimento and Resistance Museum, with documents that go back to Napoleon’s campaigns in Italy. 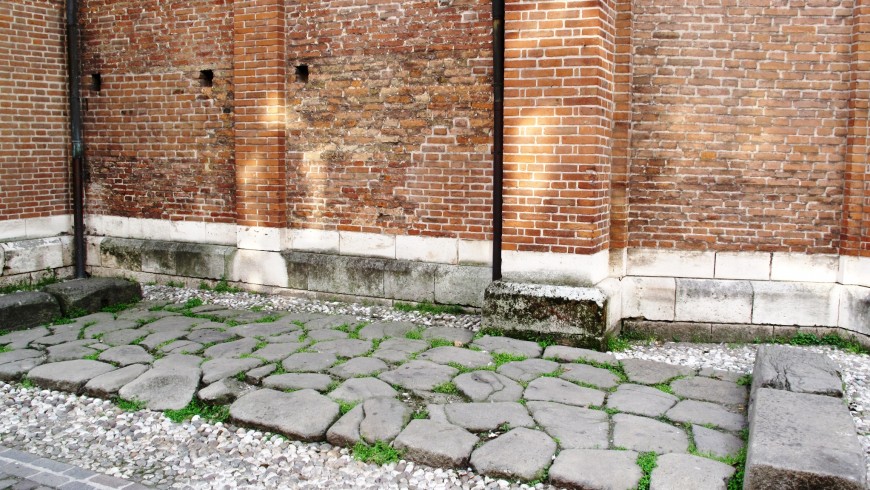 A testimony of Vicenza’s Roman past that history-lovers cannot miss is the cryptoporticus of an ancient rich domus. Unfortunately, no other trace of this house remains, but this underground floor. Still perfectly preserved, you enter from Piazza Duomo, go down 6 m beneath the surface and walk along the U-disposed three corridors. It was discovered in 1954 and the artifacts found there are now in the Museum of Santa Corona. Another proof of the past Roman domain are the remains of the ancient decumanus (today Corso Palladio, the main street of the city center) and of the ancient cardo (Corso Fogazzaro), the two streets meeting at right angles that are the structure of every Roman city.

8. Villas just a stone’s throw away from the center 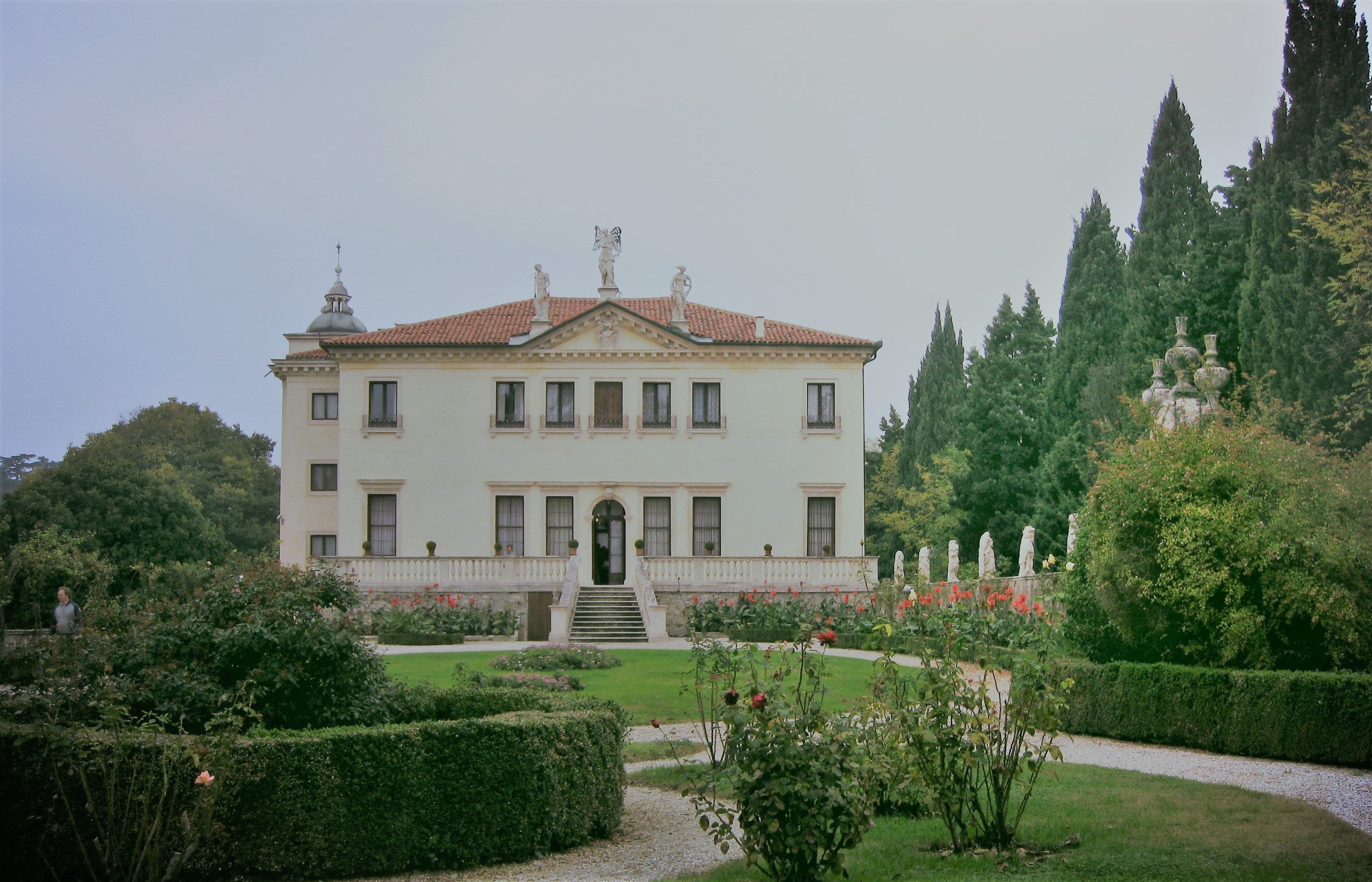 Palladio spread his beautiful villas all around the Venetian countryside. Just a few miles from the historical center, there’s Villa Valmarana “ai Nani”. Built on the hills of the Riviera Berica, it’s not far from the Sanctuary of Monte Berico and lies on the path to reach the Rotonda, property of the Valmarana family too. The Villa takes its name from the statues of dwarves that, as the legend goes, protect the sleep of one of the owner’s daughters. Giambattista Tiepolo and his son Giandomenico frescoed the rooms of the villa with scenes taken from classical mythology and literature. You can see scenes from the Iliad, the Aeneid and the Freed Jerusalem by Italian poet Tasso through fake colonnades and arches, painted using the trompe-l’œil technique. This painting method uses the perspective’s principle to give an effect of “breakthrough” to the walls.

9. The WWF oasis in Casale 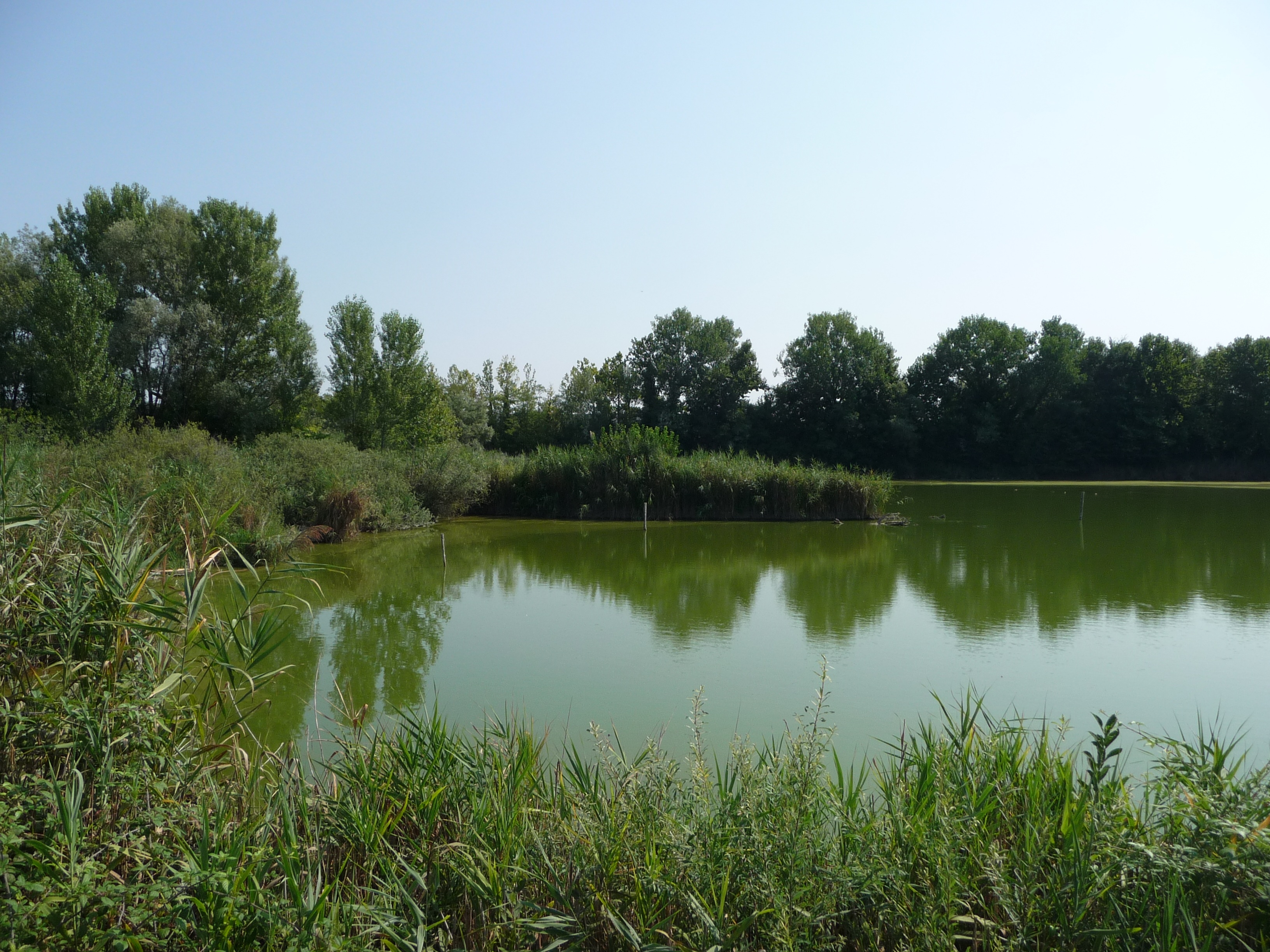 In Casale, in the municipality of Vicenza, there’s the Natural Oasis “Alberto Carta”. It’s a WWF haven and a Special Protection Area to give shelter to the several animal and plant species that live in the area. Originally, in these marshes people extracted clayey materials, but when the human activities ended, nature quickly took back the swamp. In the oasis, there’s the possibility to book guided tours and there are many didactic activities for families, groups or classes. It’s also one of the best places to bird-watch in the province of Vicenza. 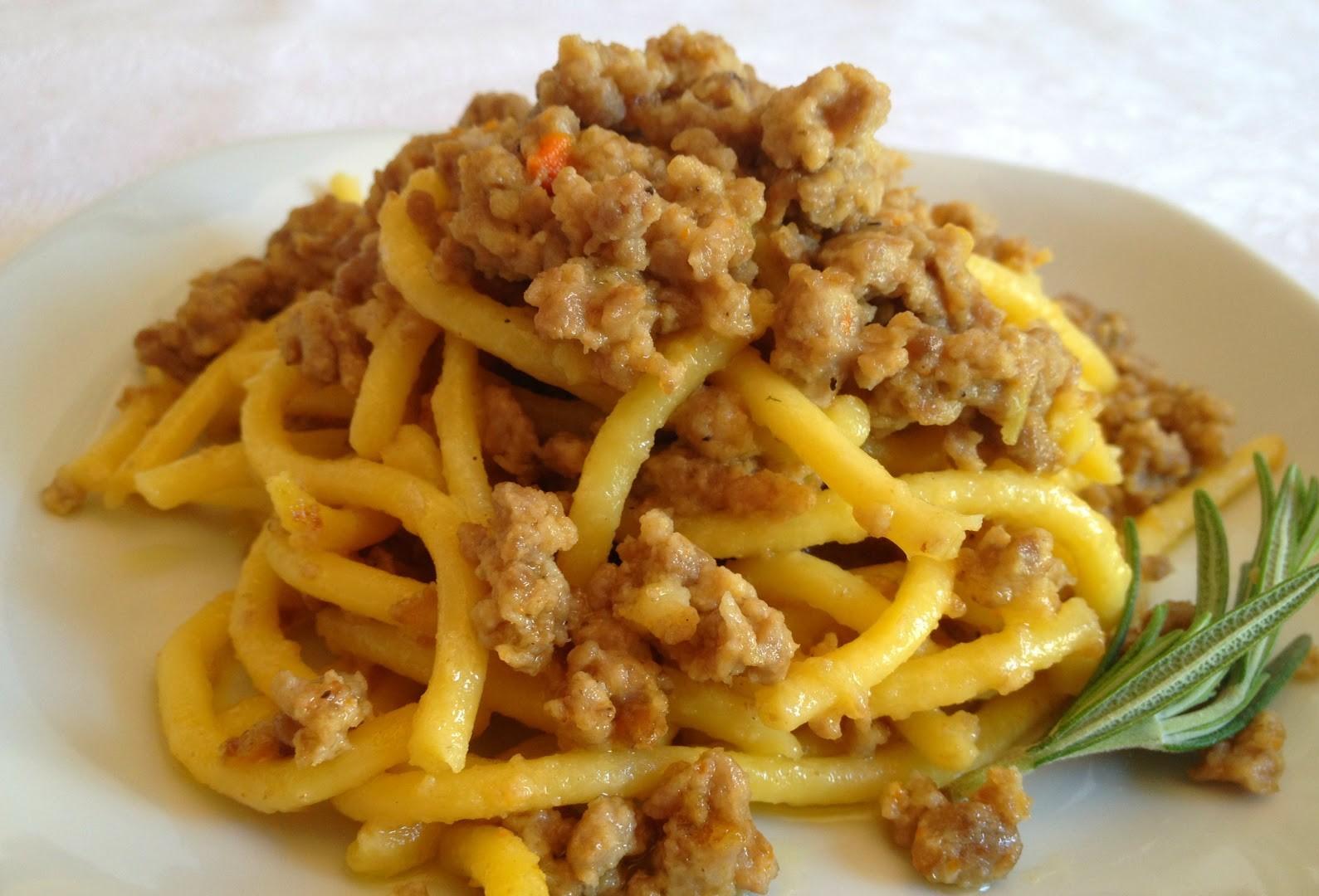 The typical bigoli with duck ragù

The culinary delicacies typical of Vicenza are dishes of the Venetian tradition: poor and simple, yet tasty and nourishing. Among the thousands of variants of the risotto, characteristic of Vicenza is the one made with “bruscandoli”, plants similar to asparagus that grow in the hills around the city. Another first course are egg noodles called “bigoli” eaten with duck ragù. You can find them in every town and village fest of the province.

The way people cook cod in Vicenza is known all around the country as baccalà alla vicentina. It takes a very long time to cook the stockfish and then it’s eaten with polenta. Pietro Querini was the merchant from Venice who imported the cod in the Venetian lagoon. He had a shipwreck in the Lofoten Islands (Norway) where he discovered this fish. Another product typical of this province, but now known and recognized also in the rest of Italy, is the Asiago cheese, made on the upland of Asiago, at the border between the provinces of Vicenza and Trento. 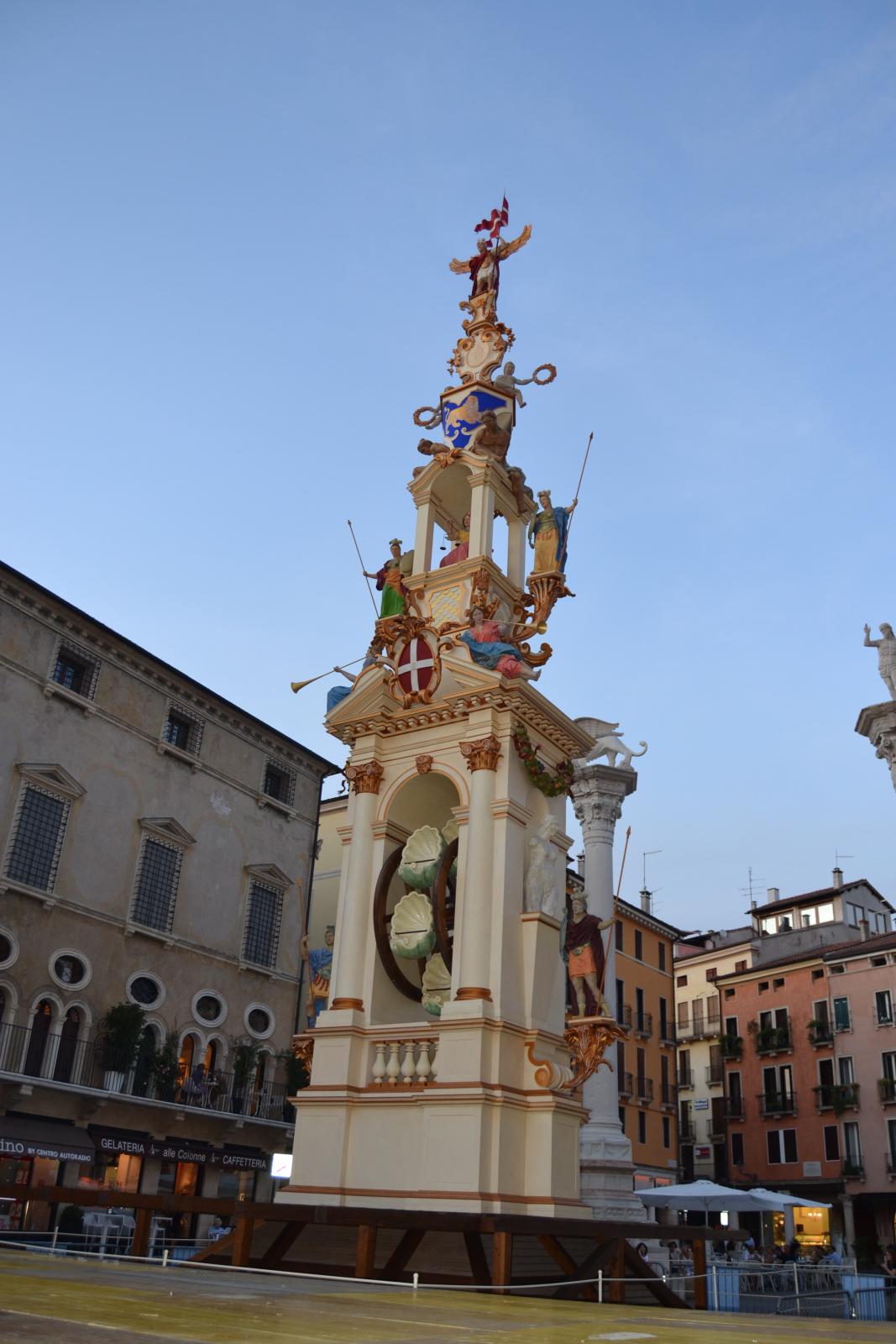 The Rua in Piazza dei Signori, photo by Monica on Flickr

Vicenza, however, is not only stunning buildings, astonishing parks and wonderful artworks, but also a lively city full of events all around the year. One of the traditional fests is the “Rua”, which means wheel in the local dialect: A wooden structure was carried around the city’s streets. The original one was destroyed in a bombing, but another one was rebuilt some ten years ago and in September is exposed in Piazza dei Signori. After the abandoning of the tradition at the beginning of the last century, a smaller version of the Rua parades through the streets of the historical center at the beginning of September. 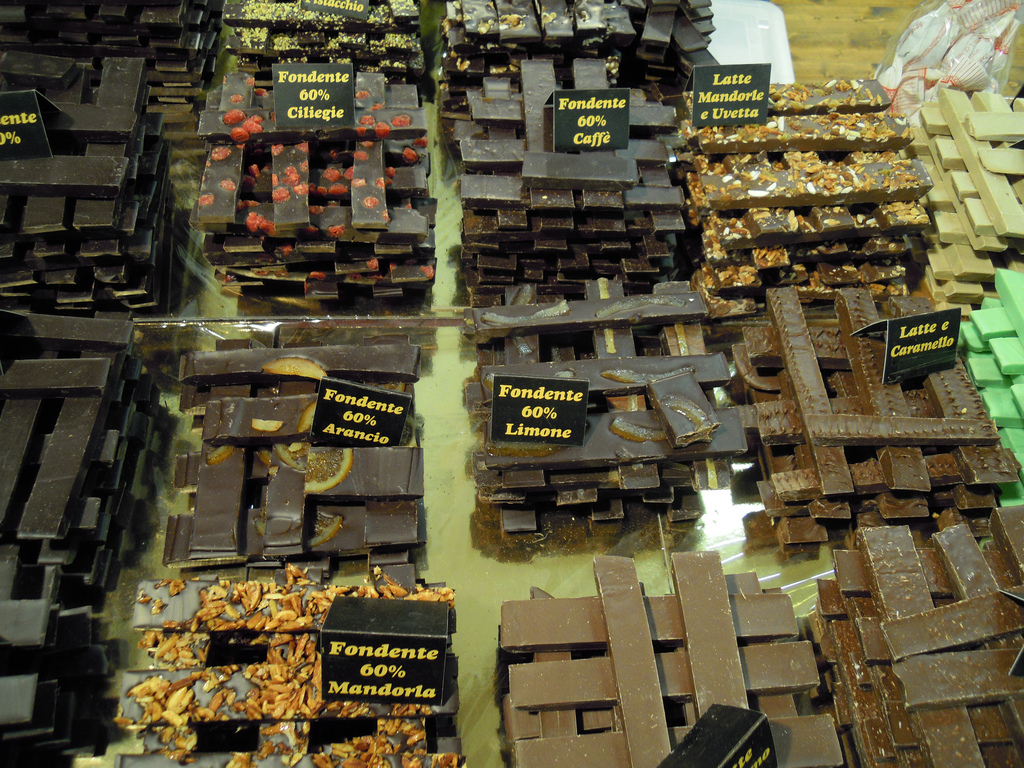 Strolling among the stands of CioccolandoVi, photo by Laura on Flickr

Among the most loved festivals, there’s CioccolandoVi, an open-air tradeshow of the best chocolate-makers that visits Vicenza every year at the end of October. Sport-lovers will love the StraVicenza, a competitive (or not) run that happens every mid-March. Participants can choose between 3 different path and then run or walk through the Vicenza’s streets. On the same day, cars can’t circulate in the city center. 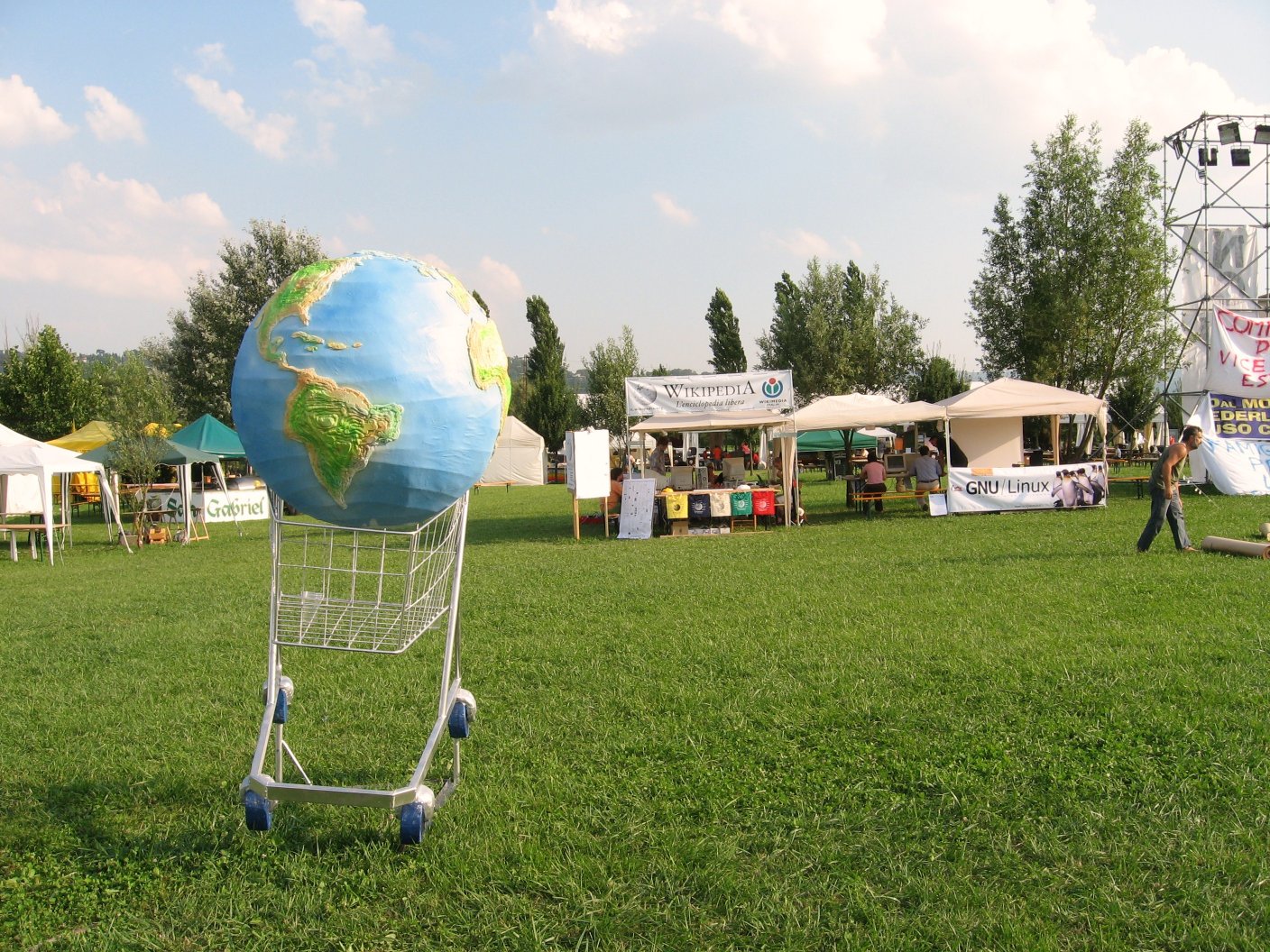 Festambiente, the festival of those who believe in a greener future, in Parco Retrone in Vicenza

Every year since 2002, between the end of June and the beginning of July, in the Parco Retrone there’s Festambiente Vicenza. It’s a festival promoted by Legambiente, to raise people’s awareness about more sustainable lifestyles and the safeguard of our envirnonment. It’s one of the biggest “green” festival in Italy.

What are you waiting for? Look for your perfect eco-friendly accommodation and book your green holiday in the beautiful Vicenza

10 tips to discover an extraordinary and green Venice