“Sani! Vegn inte!” Charly opens the heavy chestnut door of the ancient mountain lodge. Outside only white, soft and bulky snow. Inside the loud fire of the fogher, the heart of the Val di Zoldo houses. A fireplace open on four sides and surrounded by massive wooden benches, where we sit as the inhabitants of these tiny villages of the Venetian Dolomites have always done, warming up, cooking, chatting and listening to the stories of the place.

Charly and Paola, holding a glass of local wine and wearing the traditional “scarpet” (hand-woven trousers with string) tell us about ancient times, about grandpa Zoldano di Paola, forced to emigrate to Venice to find work, about the blacksmith Baccan who with his astuteness had even pitched the devil, about the “pulesso” and the “pulessa” an ancient green story that shows us how even a very small action can upsets the balance of the whole world.

Stories and tales in ancient language, Zoldan, Ladino Stump, but still spoken and written by everyone in this mysterious valley. Tales that welcomes us in the heart of the Dolomiti Bellunesi National Park, one of the youngest and wildest Italian parks. A place that surprises us for its uncontaminated nature and for so many hidden treasures. A place we recommend you visit. That’s how! 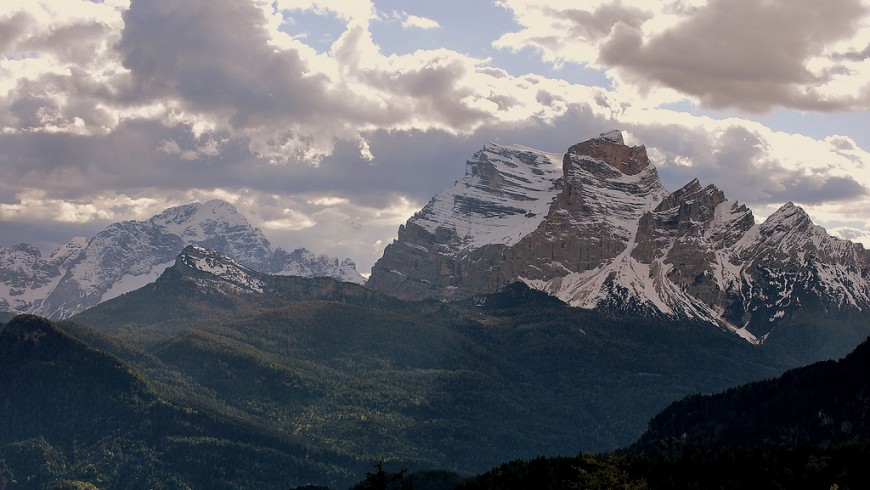 With snowshoes, traveling in time on Zoldo valley trails

“The time of the paths, of the humble paths has arrived.” Thus started the tale of Giovanni Angelini, the humble “professor” of Val di Zoldo who in the last century loved to go, see and feel the mountain, rediscovering forgotten paths. So begins our adventure between the blades of San Sebastiano and Moiazza. We wear some caspe, the snowshoes as they call them in Zoldan dialect, with which we can float on the soft snow that covers the landscape without interruption.

All around, behind the dense clouds, there are the powerful profiles of the Dolomites: although we do not see them, we perceive their presence. The snow falling softly covers our jackets and backpacks, slips into scarves, punches our faces, dampen the sounds of the mountain, transforms vibrant colors of nature into a fascinating cold desert, and we walkers into small lost astronauts. Emiliano, our exceptional guide, reveals the wonderful and ancient novel of this place. Suddenly, with his story, snow seems to melt and leave room for plains, seas, oceans and tropical islands. We move slowly on fresh snow but we also travel fast in time and space.

It all started from there, from an ancient mountain range, which subsequently became a great plain ridden by the rivers, then invaded by the sea, at first shy, and then deep and rich in life. Later this sea became an archipelago of islands, which remained for millions of years, in which “the wonder” happened.

We walk at high altitude, where 240 million years ago there was a tropical sea, dotted with atolls and volcanic islands that with time grew in size to become similar to the Caribbean coral islands inhabited by the early dinosaurs. If there were no snow and fog, we would read the traces of this past in the incredible color contrasts of the Dolomites, in the coral that are still in the rocks, in dinosaur prints.
Listening to the stories of our geological guide, we can imagine our journey through the deep sea between coral islands that 100 million years ago emerged from the sea for thousands of meters, following the Africa collision against Europe, drawing the indistinguishable morphology of the dolomitic landscape.

The short walk on foot, but a long journey through time and space, ends at the Carestiato refuge, a small mountain lodge that welcomes us with its wood scent, the heat of the stove, the taste of the “casunziei” (typical tortelli of Red poppy seeds and poppy seeds), homemade bread, spicy vegetable sauerkraut with cumin, and hot strudel. 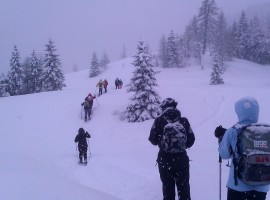 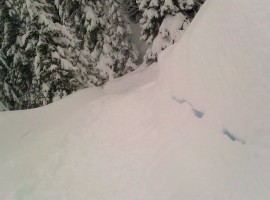 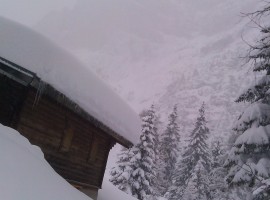 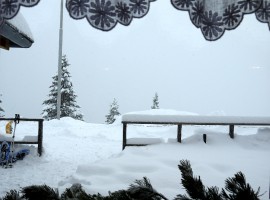 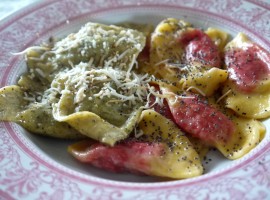 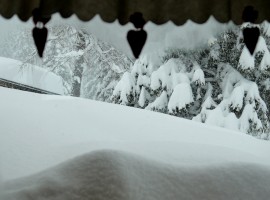 Ancient villages nestled in the mountains

Fornesighe is a small mountain village of 200 inhabitants, one of the few preserved as it once was, because unlike many others it has never fired, a rare thing that has kept the appearance of the beautiful wooden houses unchanged.

In ‘800 the inhabitants were four times as much, and the houses less than half, tells us Renato who has lived here for ever. Today, along with Anna, he has a small and evocative eco-friendly B&B, in the heart of the ancient village of Fornesighe, housed in an old building where one of his grandparents lived together with six other families.

The small apartments, each of which was reachable from the outside with wooden steps, today are the cozy B&B rooms, furnished with antique furniture and items. The large wooden attic once used by families as a workplace opens with breathtaking views of the mountains.

Wood and iron was worked here, making the nails that made the small town famous (not far away, you can visit the Zoldo Furnace Museum). To furnish the space Renato recovered and restored many old objects, such as the old carpentry bench.

In front of the mountain view, we enjoy the loca exquisite breakfast, with homemade jams and the strudel made by Anna.

The ancient village of Fornesighe, studied with passion by the famous architect Edoardo Gellner, is made up of traditional stone and wood houses, beautiful barns (the “tabià“) whose wooden beds served to ripen the corn, a church and the small but unmissable Clara’s bar. From Fornesighe you can walk on foot or with snowshoes for walks in pristine nature, or reach the small rural village of La Veda (20 minutes on foot), still without light and water, Cornigian (40 minutes on foot) and the old mining town of Assera (one hour on foot). These are three villages born as rural appendices of Fornesighe where the inhabitants moved in during the summer to bring the animals to the pasture. Today in Cornigian there are 5 houses, a family-run farmhouse and a small restaurant (Inte Cornigian), which we recommend to visit for a gourmet stop with local dishes.

A different way to get to know these enchanting villages of the Val di Zoldo is Gironzoldando, a festival of theater walks accompanied by a couple of singers, actors and deeper acquaintances of local culture and traditions.

Finally, you can’t miss Fornesighe the Gnaga Carnival, a tradition that is repeated since the end of the 19th century. 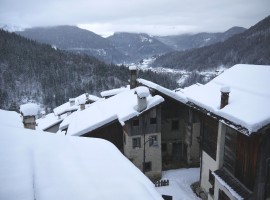 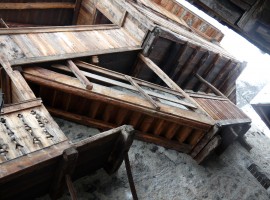 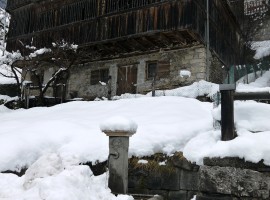 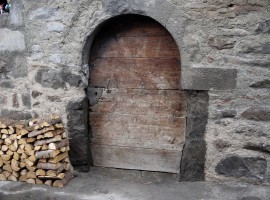 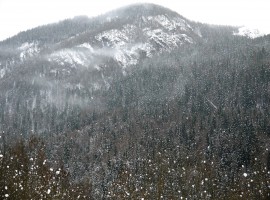 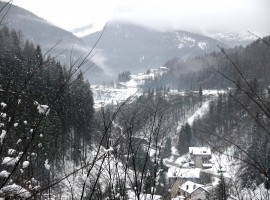 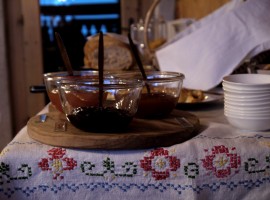 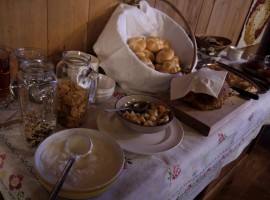 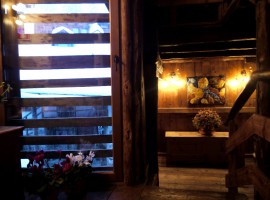 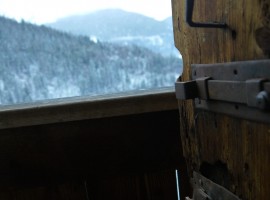 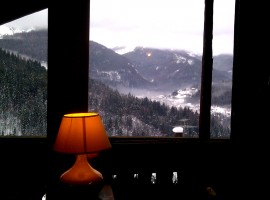 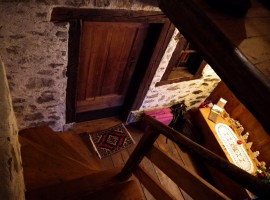 Glide on the snow, even at night

It’s Friday night, what do you do? We wear a couple of snowshoes to our feet and climb up the snow-covered mountains, between the woods and the vertical profiles of the mountains: on the one hand the Mount Civetta, on the other the Pelmo. Only 40 minutes walk on fresh snow that cracks cheerfully under the snowshoes to get to “paradise”. “Su’n paradis” is the name of the large wooden refuge that day by day welcomes skiers from the large Ski Civetta district, half an hour from Pecol (in the municipality of Zoldo Alto) and at night it becomes a romantic and cozy retreat to enjoy a great local cuisine with local products, from cheeses to meat, from soup to beer, to homemade cumin grappa. 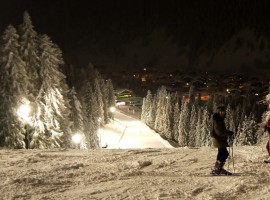 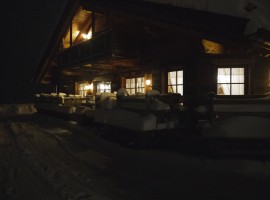 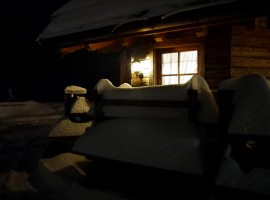 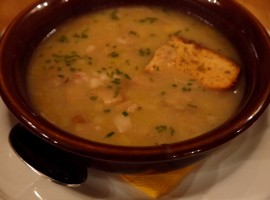 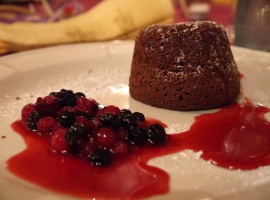 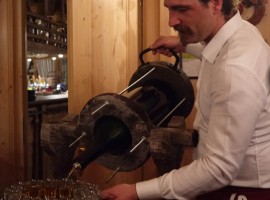 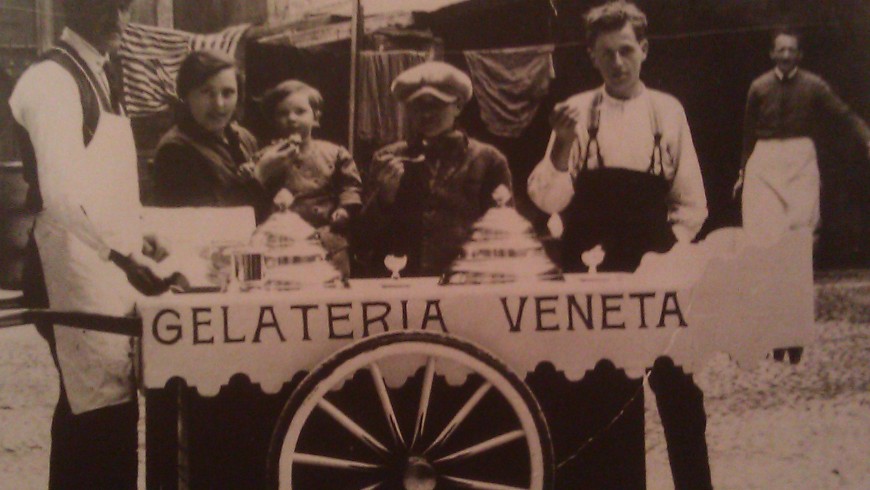 If the Sicilians invented the ice cream and the Tuscans invited the cone, among these mountains was born the idea to diffuse in the world the ​​artisan ice cream. Apparently the first permit for ice cream retailers in history was assigned at the beginning of the last century to an inhabitant of the Zoldana valley emigrating to Vienna. Wherever you go to Val di Zoldo, from Longarone to Forno di Zoldo, you can come across an old black-and-white photo of some ice cream retailer with a mustache, hat and cart. Proof of this, in the main squares of several European cities, from Munich to London, from Berlin to Freiburg, we still find an Italian ice cream parlor of Zoldan origin.

In Val di Zoldo, every year at the end of July, there is “Gelatiamo“, an itinerant festival of ice cream. Last year, the world record for ice cream cones was conquered: there were 85 ice cream balls of different flavors on a normal cone. One and a half feet of ice cream under the astonished and unbelieving eyes of children and adults!

From mountain to the sea

Almost absurd, this quiet corner of the Dolomites, which few know, is less than an hour away from one of the most famous cities in the world, Venice.

The magic conurbation on the water is the city where “nothing is born and everything is found”. At the same time, the forests of the Zoldane valleys are the “forests” of Venice, whose trees were the raw material of the Lagoon.

You will surely be surprised by discovering that in Val di Zoldo, besides walking, climbing or skiing, you can opt for a day trip to the sea, a visit to Venice, maybe on board an old barge that runs slowly through the creek to the sea.

If gigantic cruise ships arrive in Venice every day, and 25 million tourists invade the fragile and wonderful fabric of the city, inhabited by only 25,000 residents, on the Dolomites (but only one hour away), the Val di Zoldo offers unexplored nature, ancient villages, true stories, incredible and engaging characters, authentic life far away from tourism often “unsustainable” of the lagoon.

“Sarevede,” Goodbye, we’ll see each other again. Because once we discover the Val di Zoldo we cannot help but go back!

How do you get to Val di Zoldo? From Venice to the station of Longarone-Zoldo are about 2 hours and a half by train.

What to do in Val di Zoldo with children? In addition to walks in the mountains, you can discover the first inhabitants of the Dolomites, when the mountains were beaches and coral islands, in the Cazzetta Museum in Cadore, by the name of the passionate discoverer of the mountain Vittorino Cazzetta, who found Mondeval man in the same alpine meadow above Selva di Cadore where the museum is today. Or you can walk in the woods by listening to the gnomes’ fairy tales: every July and August the Dognomitico group organizes fun narrative walks. Finally, every day in the weeks of July and August, in Zoldo there are many fun activities for the little ones (“green week of the child”): from the laboratories with pine cones and lichens to the treasure hunts, to visits to farmhouse to find out how cheese is made…

For those who love trekking: the Zoldano Ring is an impressive 6 day walk (30 hours of walking, 70 km, 5,000 meters in altitude) overnight in the shelters and bivouacs of the Dolomites.

Snowbike: enjoy riding on the snow in Italy!