Il Bosco delle Terrecotte is a bed and breakfast in the area of Cuneo, North West Italy, a few kilometers from the French border.

But if you think this is just another one of those pretty little places to rent a room for the night, you couldn’t be further from the truth. Il Bosco delle Terracotte is more than a simple b&b- it’s a sanctuary where your spirit, senses and talents will be inspired and set free.

After a short stay here, you’ll go back to your everyday life with new energy and a new outlook. This is exactly what the guests of the bed and breakfast run by Marco and Silvia say about their stay there.

Il Bosco delle Terrecotte won the national award for “Adotta un turista” – “Adopt a tourist”; various hospitality organisations and associations took part in the fiercely competitive event to propose the most innovative ideas to promote their territory and its resources.
Il Bosco delle Terrecotte won the most votes and four lucky people got to stay there for a weekend, to discover the beautiful countryside and unearth their talents for raku ceramics. 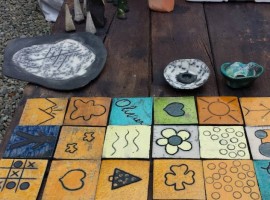 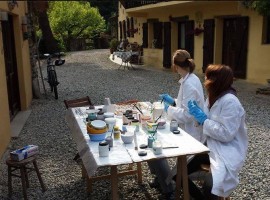 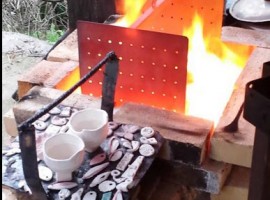 Why not?
When Marco and Silvia moved to the old farm they immediately decided that the huge outside fire had to become the highlight of their property; their symbol, and that’s how Il Bosco delle Terracotte came into being.
The name means “The pottery wood” and it refers to the Raku pottery cooked in it.
Raku is the name of a specific Japanese pottery which appeared in the 16th century when the tea ceremony became popular in Japan and the demand for pottery dramatically increased.
The Raku process has a double advantage: it’s faster than producing regular ceramic or porcelain and it gives the pottery an antique look that the Japanese were looking for.
And this sealed its success.
Silvia and Marco decided to make use of the immense fire not just to make bread, biscuits and other specialities, but also to produce Raku pottery.
The act of working on the clay, handling and shaping it manually and putting it in the oven waiting for the fire to solidify is something magical, and has a meditative effect, helping soothing your mind. 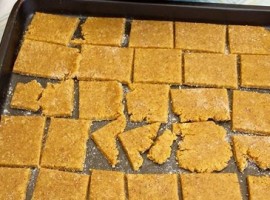 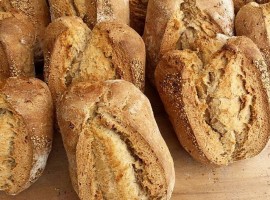 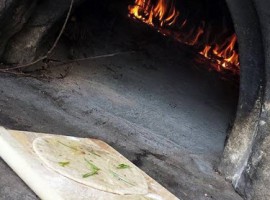 The oven is not just for pottery though.
Its main use is for cooking bread, biscuits and other treats that Marco and Silvia offer their guests for their hearty breakfast.
The bread and biscuits are made from the flour that a friend of Marco grows nearby and the yeast is sourdough, passed from an old farmer living nearby.
One of Marco’s friends once said that “ the bread sings”, and actually when Marco removes the rye loaves from the fire, the bread seems to hiss a smooth, far-away melody. 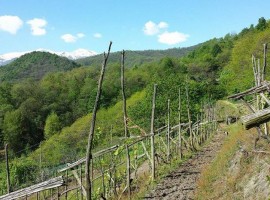 Walking through the vineyards 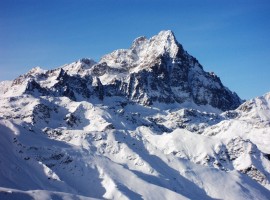 Monviso, ph. by Francofranco56, via wikipedia 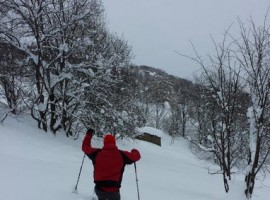 Ciaspolata in the valley around the Monviso photography via Facebook page

Passion for climbing and trekking? The Monviso mountain is close by and Marco will suggest that you join one of the many guided tours leaving almost every day to visit the Monviso and its surrounding areas. One of the tours will take you to the MabUnesco, the Unesco natural reserve split between France and Italy.
Biking in the valley of the river Po: the Monviso is the great mountain where the longest Italian river, the Po, starts from.
A guide will take you along the green valley by bike- one of the most exciting tours by far.
Enogastronomic tours: Ask your hosts to point you in the direction of the area’s best wineries and cheese producers for a real treat. A tip for which cakes to try? Go for “pasta de meliga”: delicious biscuits made of flour, butter and lemon peel.
Love ravioli? Try the “agnolotti” with different fillings: rice, spinach or even roast meat.
And don’t forget to bring home with you a loaf of the singing bread of Il Bosco delle Terrecotte to start your day with a healthy breakfast of organic bread and marmalade.

You may also enjoy:

The Alta via dei Parchi hike: the green adventure in the northern Apennines is ready!