This is a story of travel and love.

Ligabue was hit by a car on the streets around Parma. Its investor has stopped and took him to the vet. Only there they realized that it was not a dog but a wolf. After having taken care of him, they’ve applied a gps to record his movements.

In a few weekd Ligabue was back on the road, from Parma to Liguria, to France, back to his house, between the Maritime Alps, in the southwestern part of the Alps.

Was this young wolf to reveal the route of wolves, traveling between mountains, forests and amazing natural spaces.

Franco Voglino and Annalisa Popporato decided to walk part of the route of the wolves, and to trace a route in collaboration with the park of the Maritime Alps.

They walked for 10 days, with their daughter of 5 years, through the Park of the Maritime Alps in Piedmont and the Mercantour National Park in France.

Annalisa Franco and talk about their journey on foot through the beautiful mountains, enchanting valleys, lakes, forests and waterfalls.

Hut to hut have gone through no less than 5 hills at 2,400 meters above sea level, in a striking circular route, part of which goes through the streets of hunting used by Vittorio Emanuele II in the second half of the nineteenth century.

on the trail of the wolf between the Italian and French Alps, map of the route on foot 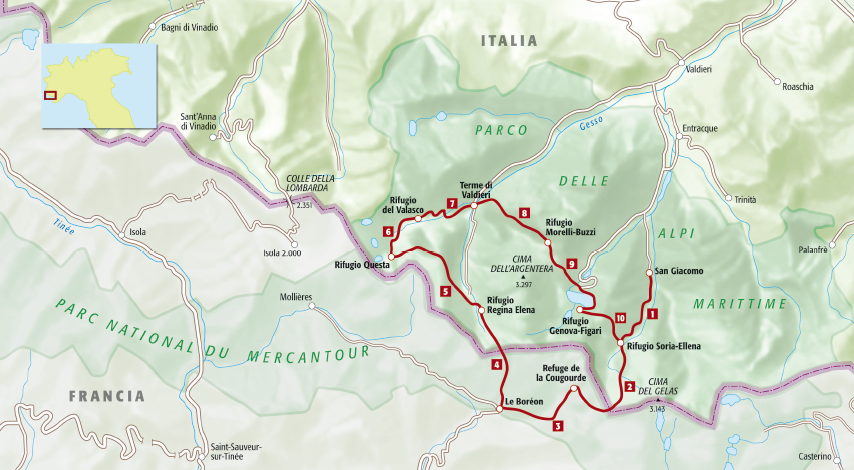 Route map of 10 days on the trail of the wolf, between the Maritime Alps (Piedmont) and the Mercantour National Park (France)

The trek of the wolf in 10 stages

The rail start from San Giacomo di Entraque, few houses surrounded by ancient forests. We are surrounded by a nature that enchants with thunderous waterfalls and streams, where you can meet chamois, shepherds, sheep and cows grazing.

Refuge from Soria Ellena, stop for the night, you walk towards Boreon through with windows, a rocky landscape inhabited by chamois, narrow passages and caves carved into the mountain, beautiful glacial lakes.

From Boreon we take the direction to the plan casa del re, crossing the Col de ciliegia. Before we cross that seem enchanted forests, such as those of the fairy tale of Little Red Riding Hood, then rocks and glaciers. So we arrive at base camp tent floor of the house, wild place where it is no longer the man but the wolf at the top of the food chain. Surrounded by majestic mountains and clouds.

From the floor of casa del re we leave for the shelter Velasco (former royal hunting lodge), walking along the actual roads, mule tracks hunting reserve of the real, which exceeds such as highways at high altitude boulders of rock. Only some of these paths have been widened during the Second World War to pass the means of war, tell me Franco and Annalisa.

We depart from the shelter Velasco to the refuge Morelli-Buzzi, amidst the clouds and glaciers, where the chamois arrive at the gates of quiet refuge.

From the refuge Morelli-Buzzi returns to the starting point of Entraque San Giacomo, where you can visit the wildlife refuge Wolves and Men, in the Park of the Maritime Alps.

After the Wolf Ligabue has revealed this beautiful path (and after that Franco and Annalisa have walked it, and have wrote a book about their adventure), this route has become a special trekking in the natural park of the Maritime Alps. 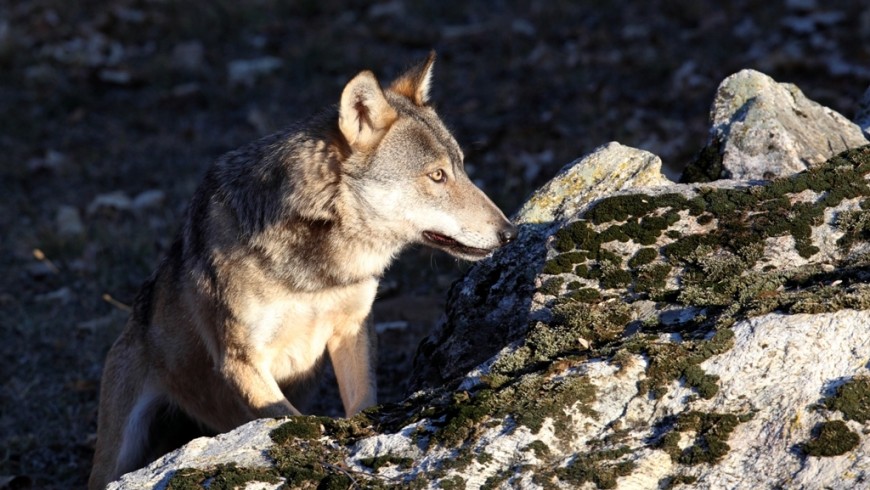 You can really see the wolf?

I can not resist the curiosity, and this is my first question. Have you seen the wolves during your journey?

Along the way, wolves are there but you can’t seen them. Wolf is a nocturnal animal, it has a powerful sense of smell and is able to perceive the presence of humans from miles away.

Once in the park, however, the wolves are close and you can see in complete safety, there are also many interactive information for children. This is for the children the greatest incentive to walk!

Info to know before you go: Dogs are not allowed in the park of the Maritime Alps. Almost all of the steps outlined are feasible even by children, but check with the park before departure. The average altitude is 800/600 meters (just a couple of steps and ‘by 1000 meters). Annalisa and Franco do not recommend the tent, because the shelters are really comfy!  More information about their book ‘Trekking del lupo‘ (in Italian). An other interesting book about the path of the wolf in Italy is ‘The Way of the Wolf. Into the wild – from the Apennines to the Alps‘, by Marco Albino Ferrari.

You may also enjoy:

Family vacations? 8 things to do in Sibillini Mountains

Ride the clouds discovering Val Camonica, in the Italian Alps