Let’s continue our journey in the Italian land to highlight some of the most beautiful free access or low cost spa stays. This time we take care of Southern Italy and the islands, that already themselves offer wonderful experiences, with an added value in terms of well-being low cost.

The magnificent island of Ischia, Naples, does not need a lot of presentations and it is known that volcanic activity in the subsoil generates numerous sources of thermal steam, some exploited for the creation of spas for treatments and cures, others are still completely free.

The fumarole of Ischia or Sant’Angelo, so called because of their proximity to the village, so they are an excellent opportunity for everyone to take advantage of the healing properties of warm temperatures of the waters and sands, especially to take relief from rheumatic pains.

In some places the sand can even burn because the steam rising from the volcanic faults ranges from 46 to 100 degrees. There are several beaches, so that none appears very crowded, at an easy walking distance, just a 10-minute away from the village of Sant’Angelo.

Our green tip: for a vacation in harmony with nature, choose an eco-friendly B & B in Ischia and the surrounding area. 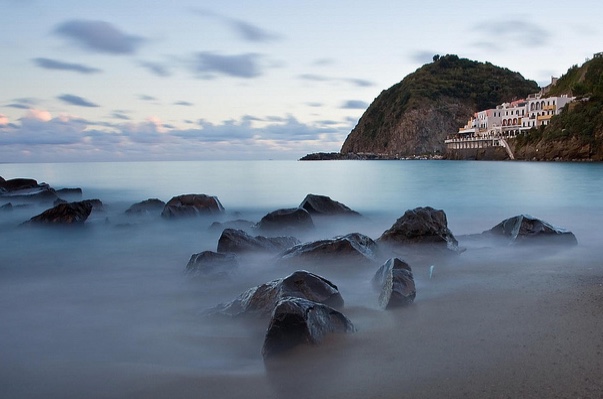 In Ischia there are also the free Thermae of Sorgeto, in the county of Forio, nestled beneath the spectacular cliffs overlooking the sea. In this area the volcanic activity of the faults heats the sea water, in some places up to 90 degrees, and the shape of the rocks create some tubs where you can benefit from thalassotherapy and properties of radon, a rare gas that escapes from the underground.

In addition to the baths, which can be more or less heatened depending on the high or low tide, you can also make wraps and masks with a mud obtainable from local stones. Ischia is accessible from the A1 exit via Campana, continuing into the port area with Napoli Mergellina or molo Beverello; on the island, take the SS 270 for Forio d’Ischia and follow signs for Panza d’Ischia.

Our green tip: if you decide to stay more than one day, choose an eco holiday home that saves energy and water and prefers organic food 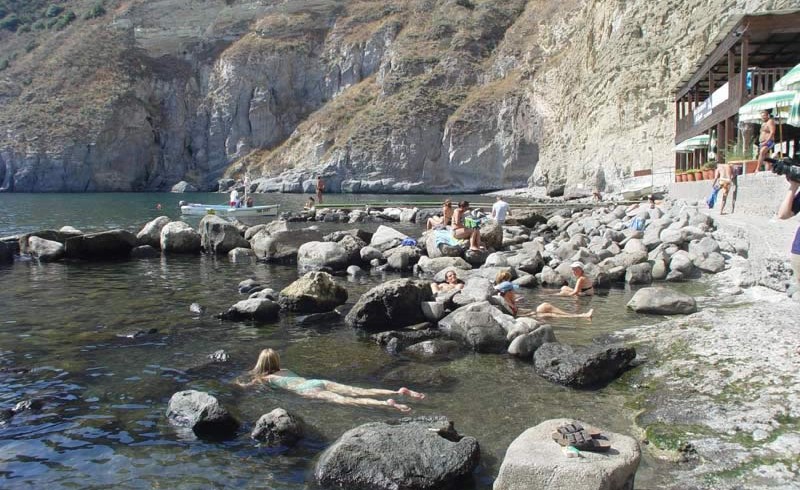 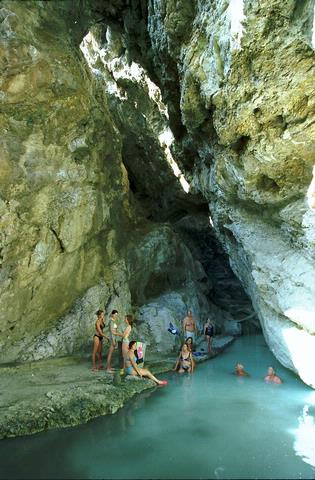 In the county of Cosenza, Calabria, there’s a singular legend concerning the thermal source of Cerchiara: it is located in Grotta delle Ninfe, which is said to be the cave where the nymph Calypso hid, while others voices argue that here the Lusiadi nymphs might guard the secret of their beauty, thanks to the source of sulphurous water.

The interior of the cave is certainly very striking and distinctive both in the limestone rock formations and for the beautiful light reflections on the water surface, while around the opening on the sea was built a factory with some pools of thermal water at a temperature around 30 degrees. The entry costs a few Euros and there is also a very convenient weekly subscription. The waters of Thermae of Cerchiara are classified as homeothermal sulfur-carbon to combat skin diseases and rheumatism.

Our green tip: choose an organic farm surrounded by nature near Cosenza

In Sicily, in addition to the official Bath of Segesta in Castellammare del Golfo, in another town near Trapani, you can enjoy the thermal waters for free. In fact, in Ponte Bagni you will find the Polle of Crimiso, the ancient name of the river Caldo, whose waters are heated by the underground magma at a temperature around 46-47 degrees.

The area is completely natural, with vegetation of reeds and tamarisk trees, waterfalls and rocks with white-pink streaks for a heavenly stay. The radioactive sodium-sulfur waters helps inthe treatment of rheumatic diseases, respiratory and skin.
To reach the free Baths of Segesta, take A29 (Palermo-Mazara del Vallo) with exit Castellammare del Golfo – signs for Segesta / Private Establishment Spa – Before arriving at the Terme di Segesta turn on the road to the left down to the river.

Our green tip: choose an organic farm in the countryside or an eco hotel near Castellammare del Golfo. 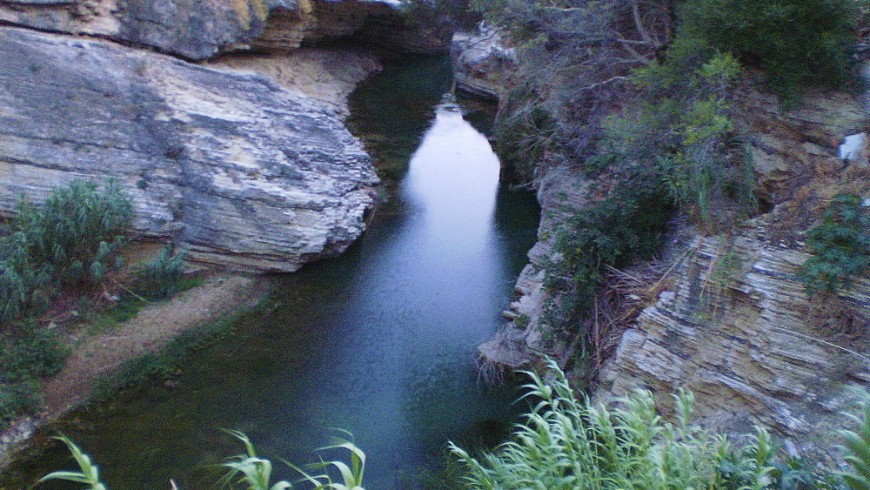 Dwelling in Sicily, more precisely in the Aeolian archipelago, the Thermae of Vulcano consist in pools of thermal water and hills steaming sulfur, creating an almost surreal landscape certainly unforgettable. In these tanks you can take advantage of the typical benefits of sulphurous waters that flowing also into the sea allow a free thalassotherapy, due to the mix of sources of volcanic and pure seawater.

In the pools, accessible until late autumn thanks to the sources that flow at temperatures between 40 and 80 degrees, you can also make wraps and mud, which although the unpleasant smell are a blessing for the skin.

In the past, the Thermae of Vulcano were completely free while today they’re operated by a company asking for a small contribution of access to keep the area clean and tidy. To reach Vulcano you nees to go to Milazzo following the A20 and then take the ferry to the island.

Our tip green: choose a sustainable accommodation in the Aeolian Islands or surroundings 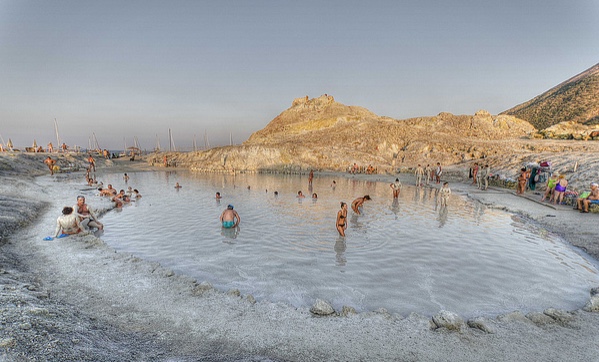 Finally, in Sardinia we point out a singular spa area on the river Tirso: the Baths of Fordongianus, a place that boasts an exceptional complex of buildings of the Roman era including a large spa tub, where it is of course forbidden to dive, because part of the archaeological area.

However there is a channel that collects water from the hot springs and bring it to the river, where in the proximity of the flow were obtained tanks that filled with hot waters of the hot spring (flowing at 54-56 degrees) offer relaxing baths and tonics.
This thermal area is accessible by paying a ticket ranging from € 2 to € 5, for cleaning and management costs made by a cooperative. To reach the Thermae of Fordongianus follow the highway SS131-Cagliari Oristano output arise – SS 388 for Fordongianus; From Nuoro and Sassari SS131 bis Abbasanta exit – Follow signs to Fordongianus.

Our green tip: for a stay in harmony with nature, choose an eco-friendly B&B in the province of Oristano, with organic breakfast and local food, such as Il Giardino di Valentina.

Cover photo: Volcano crater with fumaroles thermae in the background 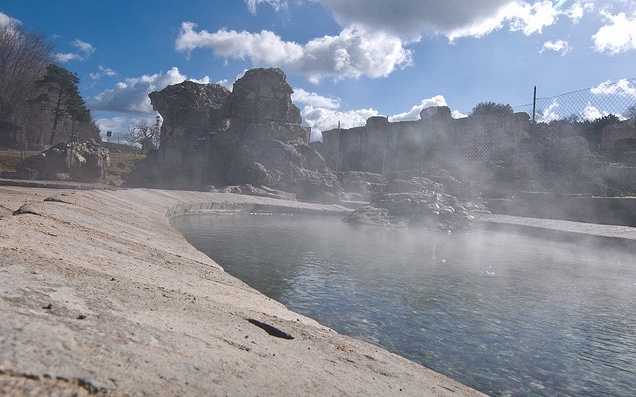