Do any of you remember the little green home, well, more of a hut to be honest, right at the top of the trees in the wild jungle where Tarzan lived?
Ever dreamt of finding a place like that? Where you can hide amongst the jungle leaves and creepers and find refuge and comfort.
We all have.
And we all have grown up and grown out of our dreams, finally setting up home in small flats in busy cities or in little cottages in small, countryside villages.
But some of us have kept the dream alive and have never quite given it up….

The manager in the tree tops

Dario is a manager of a company who imports rum from Cuba.
But Dario neither lives in a hyper modern loft apartment full of technological gadgets nor in a penthouse with breathtaking views over Rome’s Tiber River or the Thames in London; he lives in a house at the top of a tree.
And he is not the only one. His daughter Galatea lives there with her mother, Elisabeth and a few other families.
When the little “Tree village” in Mount Pelati in Piedmont was founded, a few curious and brave people came and built their own nests there.
Now the village has grown and counts around 12 people among its inhabitants.
But they are not regressing to a “back to the past” way of life and are not shunning technology and progress; they have simply decided to live a simpler life, in harmony with nature. It sounds rather good, doesn’t it? 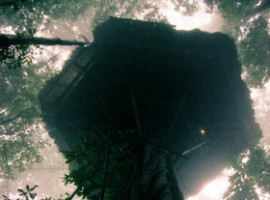 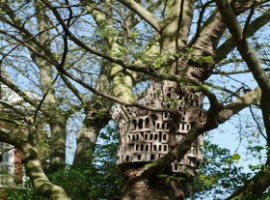 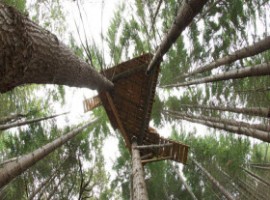 Even Ethan Schlusser, as Dario, he achieved his dream of living in the trees in the American town of Sandpoint. The only problem was the difficulty of going up and down the stairs a thousand times a day. For that Ethan has invented an environmentally friendly lift using his bicycle. By modifying his bike Ethan is in fact was able to fit this need. How? Cut the large sprocket of the front of the bike and it has welded on the rear to obtain a lower gear speed and the climb. So he created a system of pulleys in which he connected the ends of the bike. So he can get with a few rides easily on top of his tree house. Incredible, is not it?

Why not create a hotel that you can transport anytime you like according to where the sun shines or for a special event? And why not make it eco-friendly?
Too much? Not really. The architects of the Penta group have successfully combined eco-friendly buildings and tourism to come up with an innovative idea they presented at the “AIM Legend of the tend” competition: a modular complex made up of several different sections based on bamboo structures assembled in an X.
And if it reminds you of something you’ve already seen, that’s because the technique is exactly the same one once used by native American Indians to build their light tepees.
The complex can expand or decrease in size and once the bamboo elements are no longer needed, they can easily be recycled for use by constructors. 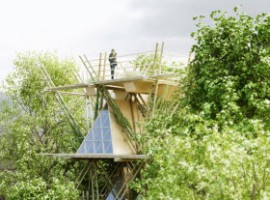 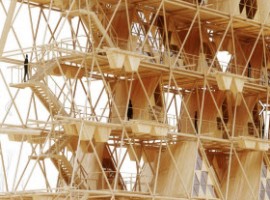 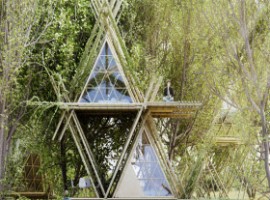 Treehotel, the UFO room and other stories.

And as we’re talking about tree houses how could we not mention the Treehotel again?
We raved about it in detail here and we wanted to underline again the eco-friendly ethos of Britta&Kent, the hotel’s visionary founders.

And to finally spell it out: a different way of life is not only possible but it turns out to be economically rewarding too. A natural pace of life, less pollution and noise seem to be just the right balsam for our body and mind. 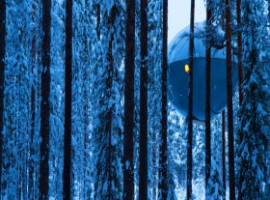 Live on a tree house