If you love bicycles and culture then Amsterdam is the city you belong to! But how did this city end up being the World’s cycling capital? His relationship with cyclists hasn’t always been happy like today….

In the early 50s, Amsterdam was one of the most congested cities in Europe with a high traffic related death rate. Now it’s considered the World’s Cycling Capital. How was it possible to give back to cyclist and pedestrian the supremacy of the city streets, during a period of deep industrialization?

The story behind Amsterdam’s cycling paths 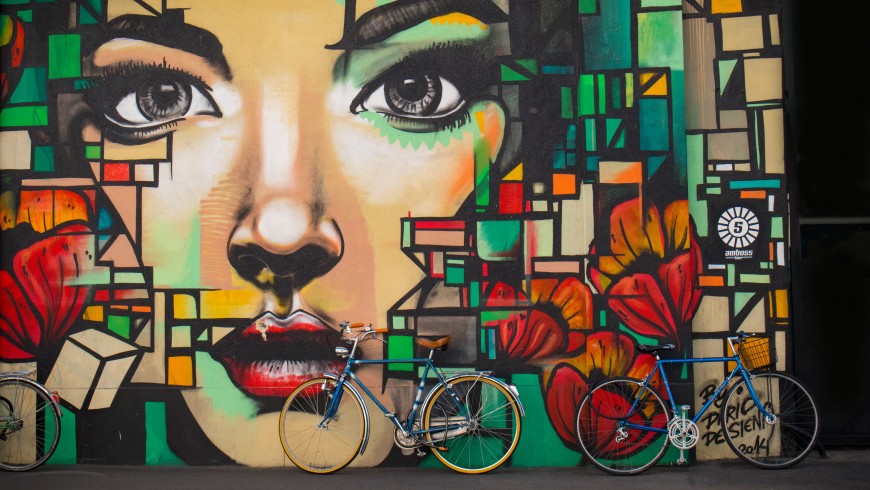 Ph by Timon Klauser, on Unsplash

“Take the bike and feel safe, you don’t have to worry about cars, they’re more afraid of you then you of them”. Amsterdam is one of the cities with the highest percentage of cyclists, with 60% of the inhabitants moving daily by bike through the city’s centre. That also permits to decrease the air pollution: we already know the it damages our intelligence

As the official city’s website says, cyclists have already outnumbered cars by 4 times, reaching the impressive number of 1 million of bicycles in the city, with a population of 800’000. The relationship of the Netherlands with cyclists have surely old roots. Its geography makes it advantageous to take a bike if you have to cover a short distance, as the country mostly lies on flat ground.

Only in Amsterdam over 400 kilometres of cycle paths allow cyclists to travel quickly all over the city. The situation that we see today could seem predictable considering that the first cycle paths were built at the beginning of 20th century as soon as the first cars started appearing around the city. 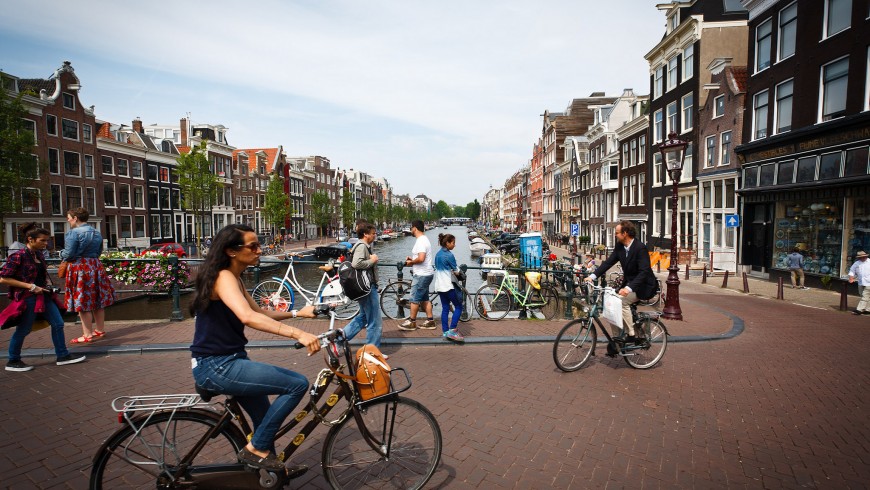 Few people know that in the first 50’s motor vehicles threatened to tear apart the city’s infrastructure and turn the Dutch capital into a particularly inhospitable place for bicycles.

When squares and parks were invaded by cars 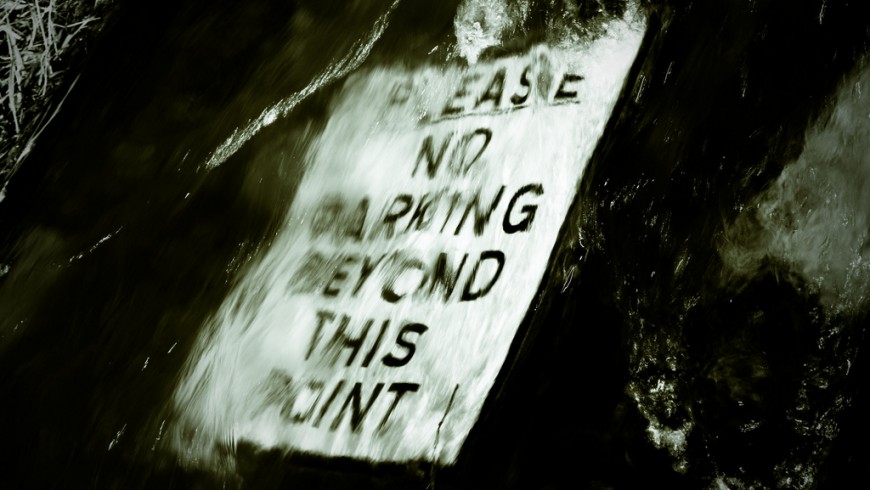 As most of the European cities after the WWII’s shock, Amsterdam started to modernize rapidly. Car’s prices became affordable for the middle classes and vehicles started invadingthe city’s streets. By then, with the idea of the car as the transport of the future, it seemed quite necessary to give to the vehicles the priority to travel throughout the city. As a result car parks and highways occupied most of the city’s free spaces and bicycle paths were even reduced. 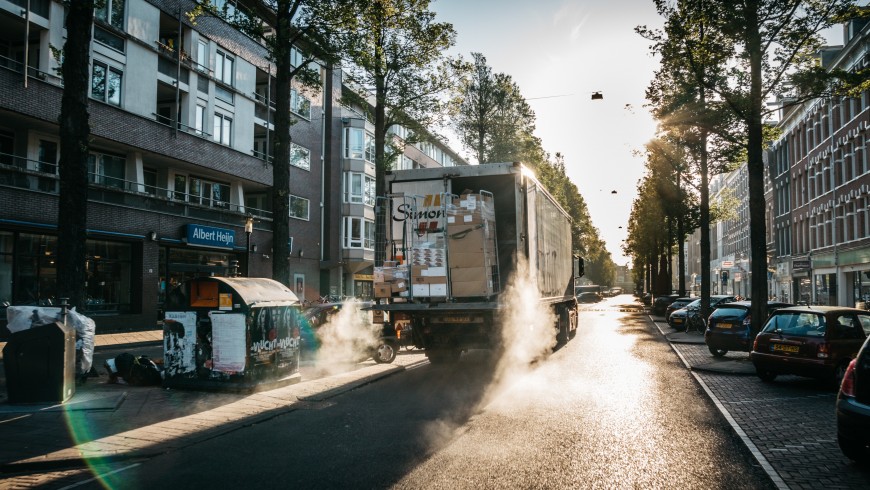 Ph by Andrew Kambel, on Unsplash

Unfortunately, traffic congestion and bad air quality were not the only side effects of this situation as also vehicle accidents highly increased. Year 1971 only, saw 3300 deaths caused by vehicles and 400 of them were child. 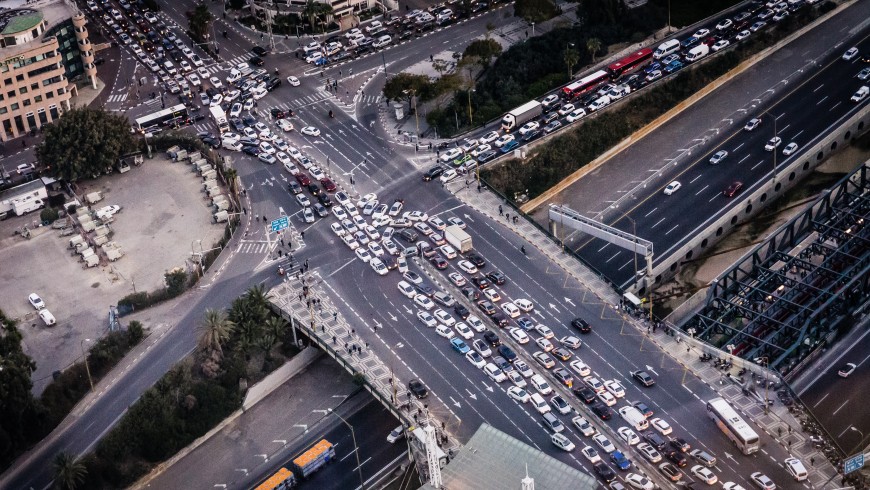 Ph by Jens Herrndorff, on Unsplash

Social unrest began to grow and the late 60s and 70s were very important years for the change, with the birth of many protest movements that asked for a reduction of the traffic flow and safe spaces for the cyclist to ride. 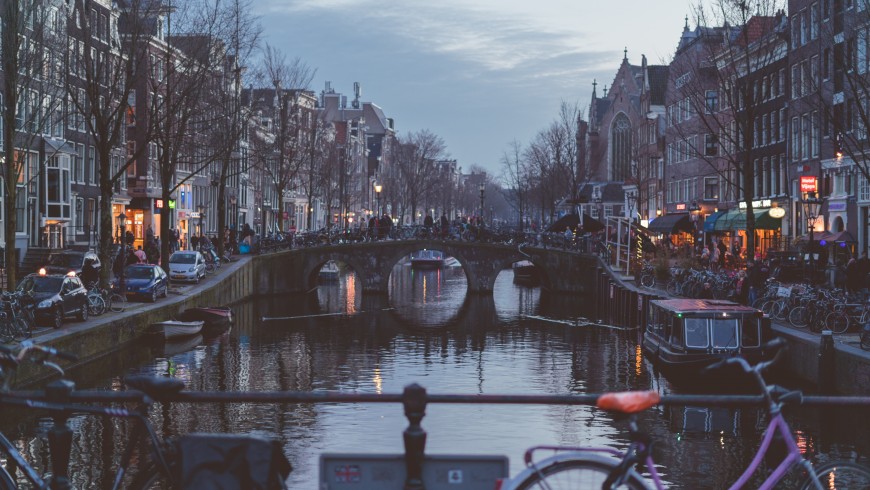 Ph by Leif Niemczik, on Unsplash

All of those movements acted by Civil Disobedience in order to gain visibility and hoping for a response from the government. One of the most influential was “Stop der Kindermoord” (stop infanticide).

From the Oil trade embargo till’ the Danish example 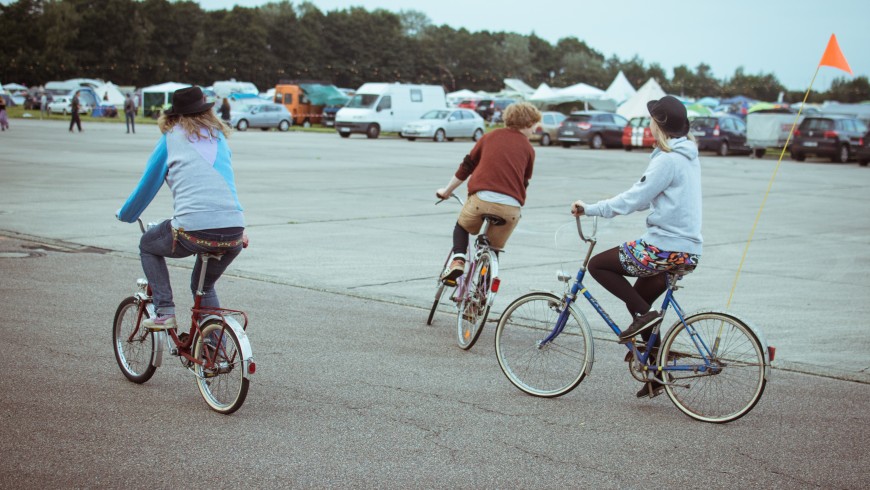 Ph by Philipp Cordts, on Unsplash

Protester from this organisation started promoting various initiatives: they directed traffic to keep cyclists safe, painted new bike paths, organised big events with cyclists meeting and riding together on busy streets to demonstrate how dangerous it could be for them. 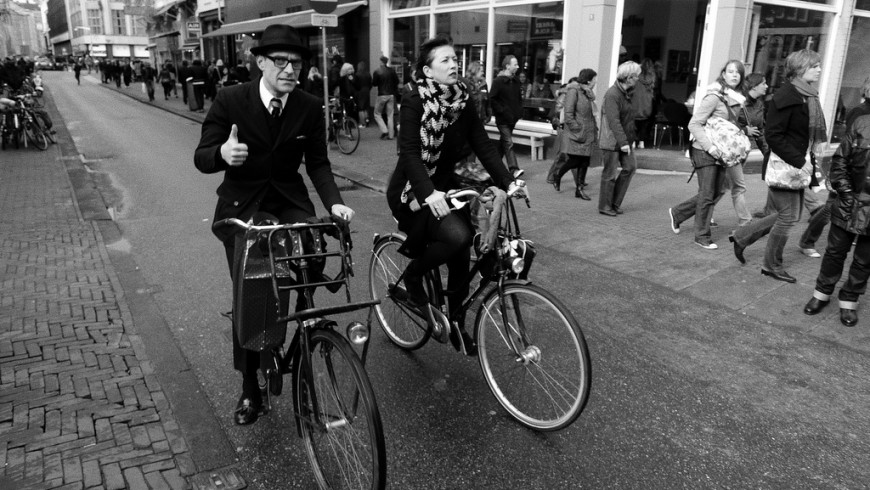 When the “Oil trade embargo” in 1973 led to a quadruplication of gasoline prices, also politicians started thinking about the costs of those huge traffic flows. There’s a famous Tv announcement from this period of senator Joop den Uyl, in which he asks citizens to limit their energy consumptions. 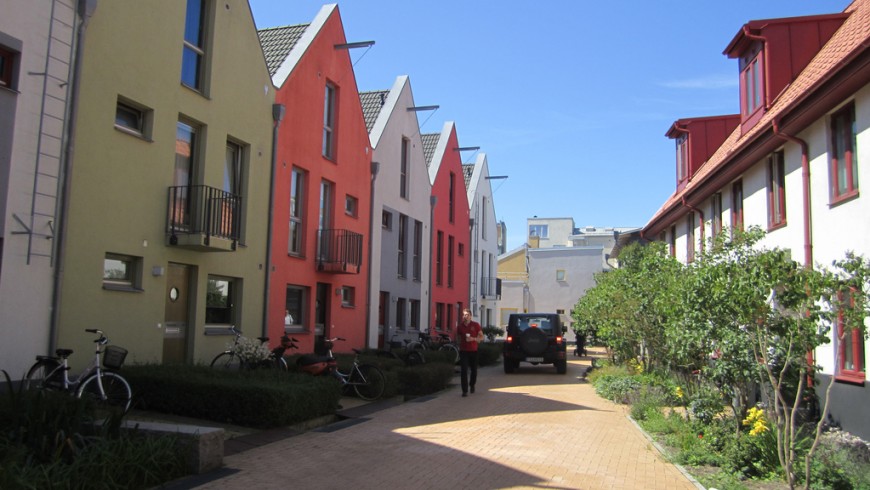 The same year the Danish government introduced a series of “car-free Sundays”. Those ‘quiet’ weekends when children could play in the streets, no rumbles, no car horns just people fully enjoying the city by foot. All of this allowed people to consider how the town could be without the car invasion. 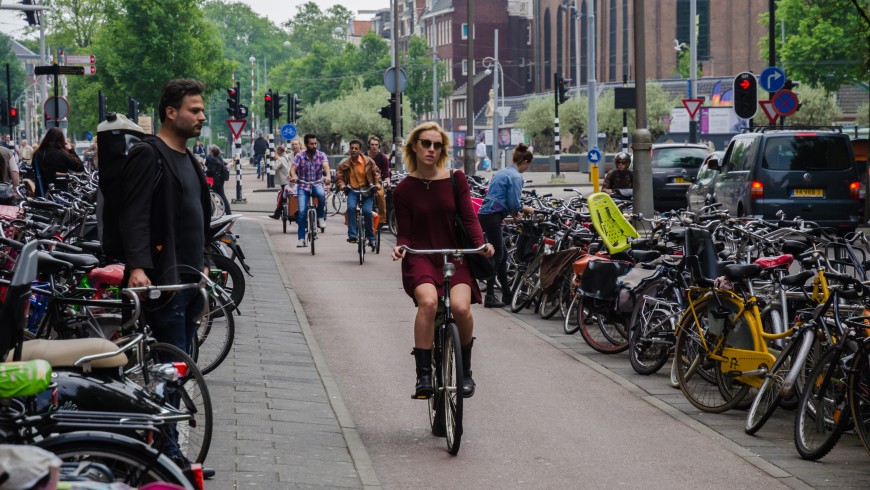 Cyclists on the road, Amsterdam, Ph. on Wikimedia

Stop der Kindemoord become subsidised by the Dutch government, got an office and started hinking and planning safer urban areas. The first result was woonerf, a neighbourhood where pedestrians and cycles have the right of way and with speed bumps and serpentine tracks to slow down cars.

How to become the World’s cycling capital? 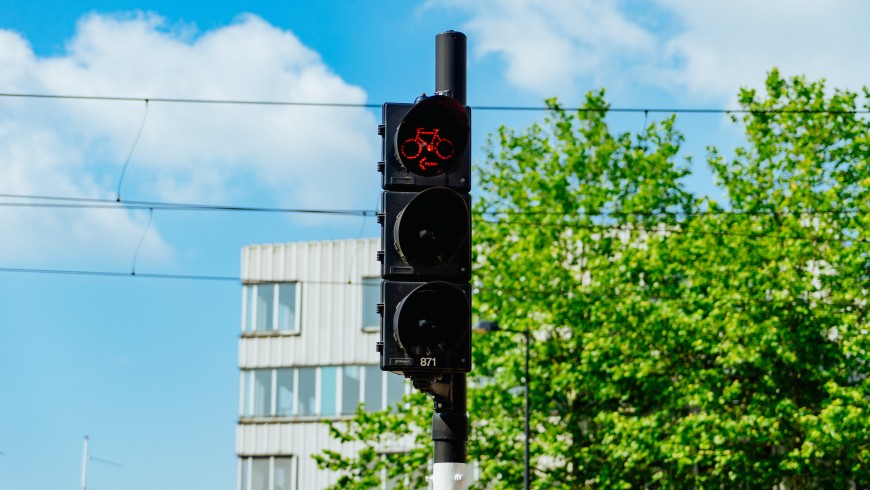 Ph by Dan Gold, on Unsplash

Starting with the 80’s first big changes were made. To get cyclist back on the streets it was necessary to build lots of kilometres of cycling paths. Hague and Tilburg were the first 2 cities which experimented an urban renovation with the construction of a wide network of cycling paths. They obtained a great success because the number of cyclists grew fast and soon after much more Dutch cities followed the example, including Amsterdam. By now lots of innovations have come in the planning of cycling traffic, for example if you ride a bike in the capital, you could find bike dedicated roundabouts, air bike pumps along the path and even cycle highways. 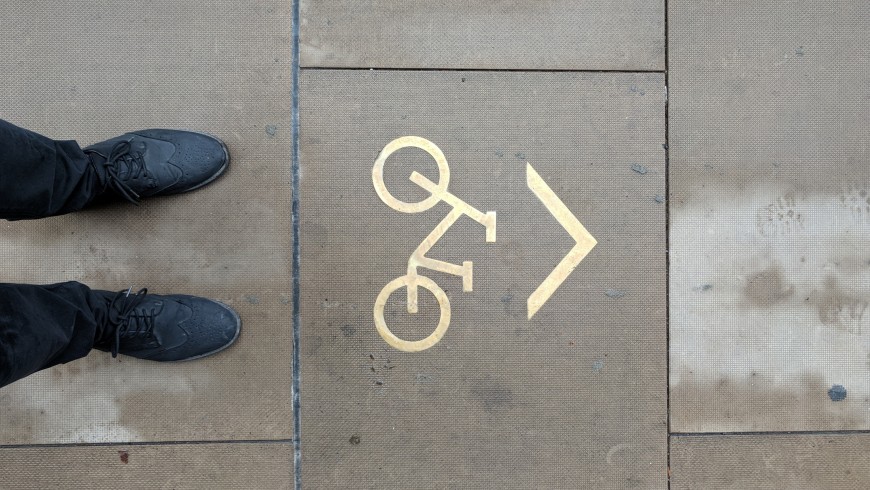 Ph by Tom Fejer, on Unsplash

Throughout the years Netherlands have developed an advanced system of urban infrastructures with the aim of giving cyclists safety and accessibility. They’re now taking inspiration from Vision Zero, a Swedish project that aims to reduce the possibility of accidents to zero. This means keeping cyclists, pedestrians and vehicles separated as much as possible so that even considering that people do not follow the rules, it’s difficult to be dangerous for the others. 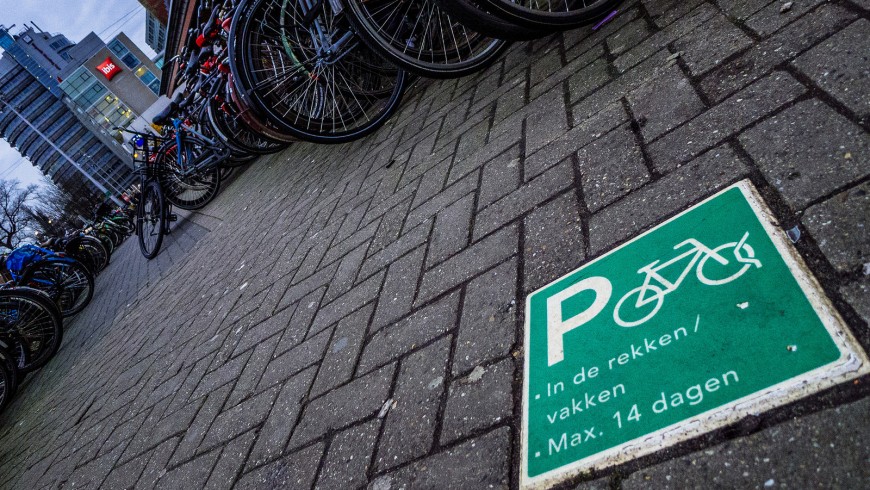 Fortunately there are many other bike-friendly cities, most of them are European like for example Copenhagen, Malmö, Strasbourg, Ljubljana, Bordeaux, Barcelona but there’s also Tokyo and Montreal. 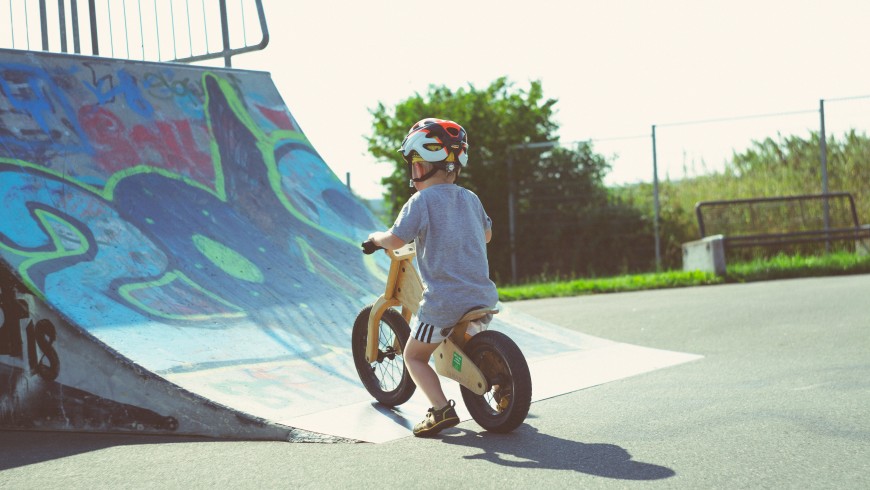 Ph by Markus Spiske, on Unsplash

Amsterdam particularly is a clear example that often the activism of some determined citizens and the good will of the administration are sufficient to find and apply green solutions that have almost no drawbacks.