Herons, white, black and even red ones, together with marsh harriers, funny squirrels, owls and the exotic pink flamingoes. Beautiful Italian deer.
Whatever your animal preference, a visit to the “Park of the Delta of the river Po” will inspire and excite you. 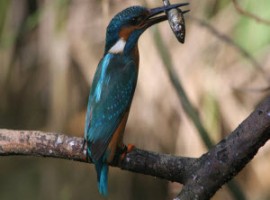 Kingfisher on the river Po photography by Ilaria Coradazzi via Flickr 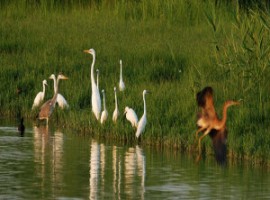 Herons, marsh harriers, kingfishers and …shells from the Philippines

Let Captain Dario, navigate his boat through the waves and tides of the lagoon of the Po river and up to where the sweet river waters meet the salty Adriatic sea waters. It is right there that the line snakes, where the two waters fall one into one another due to the different water density.
Dario will show you the sea fields where shells grow: the lagoon known as “Sacca di Goro” produces up to 50-70% of Italian shell production but the shells are not Italian; they actually originate from the Philippines. Imported some 40 years ago they soon adapted well to local conditions.
Leaving these fields behind, the boat will then head on to the cane fields. Having a professional, naturalist guide onboard is invaluable: Stefano, our guide, could spot the small kingfisher hovering in the air, the elegant circles high above of the silent marsh harrier hunting its prow and the dives of the great crested grebe.

Italy Green Travel suggestion: choose the eco hotel Cannevié, an old fishing house of eighteenth century surrounded by water, greenery and reeds, where you can discover the park of Po river, cycling and boating. Do not miss the excellent local restaurant, where you can taste the fish specialties, but also vegetarians and vegans recipes. 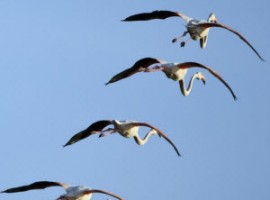 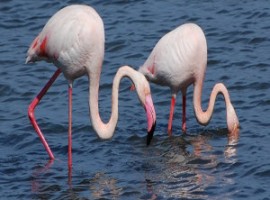 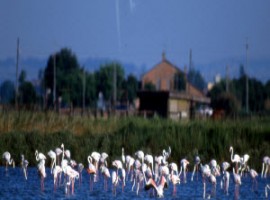 Once only a seasonal presence, the pink flamingoes have come to love living permanently in the salt waters of the Comacchio valley.
The population has reached 10,000 exemplars over the last 20 years.
Have the pink flamingoes become lazy? Are they shunning the centuries-long natural call for warmer places over the northern coast of Africa? Stefano, our guide, thinks that the effect that climate change has had, making the winter less harsh here, is the reason why we are allowed to admire this incredible pink cloud today, bobbing gently close by.
Italy Green Travel suggestion: turn into a morning lark and reach the Stazione Foce, the old fishing centre, now turned into a restaurant. If you can make it by 5 am, you will be rewarded with a breathtaking show: a pink flock will land just a few meters from you and start their busy day hunting insects and roots in the salt pools. 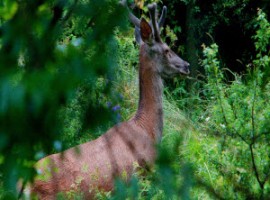 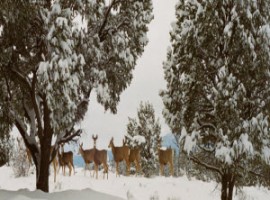 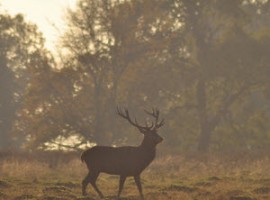 Italian deer at Bosco Mesola photography by Ale via Flickr

The real Italian deer? You can only find them at Bosco della Mesola.

What happens when a group remains isolated from the exemplars of the same species?
Look at what happened with koalas and kangaroos in Australia.
And the Galapagos and the Darwin adventure.
The flooding of part of the wood isolated the deer living there from the surrounding areas and from the European deer which was purposefully reintroduced in Italy due to the risk of extinction.
This makes the deer of the Bosco della Mesola different from its Italian relatives.
The Bosco della Mesola is now a protected reserve where deer live freely and have become somewhat used to humans being around, although there are a few precautions to adhere to: the visit is on request only, at a scheduled time and on an electric bus driven by a naturalistic guide who’s certified to access the area.
The number of deer has increased over the last few years and observing shy female deer followed by their little ones in tow is no longer a rare sight to behold.
Italy Green Travel suggestion: check with the naturalistic guides for the “love fight night visits”. During the “love season”, the deer challenge one another in romantic and fierce battles, with the defeated one usually leaving. 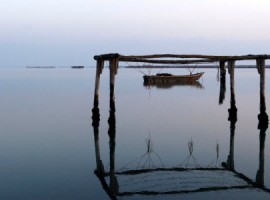 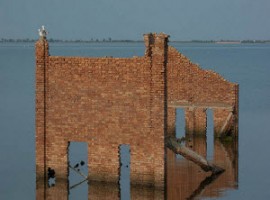 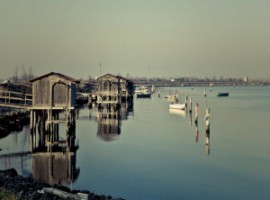 The cowboy way… along the river Po