We are in the area which was once known as Magna Frecia, a Greek colony in a over the sea territory.  And the Greeks found the area we now refer to as Macarro as a place so delightful that any man touching its sole could not but be a happy man.
That’s exactly the name of the cove.
Someone calls it “Cala ‘I don Nicola” but we prefer the Greek name as it conveys the image of a little “paradise” on the Tyrrhenian sea border. A black paradise to be honest, as the sand and the pebbles are black. This unconventional color for a beach adds an extra touch of eccentricity to the charm of the place.
Lately, facilities have made the beaches of the cove a little bit more popular. Yet, the usual overcrowded beach of the Adriatic Sea is just a distant memory. 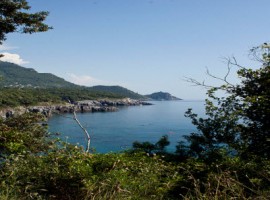 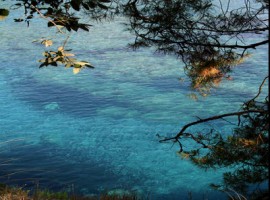 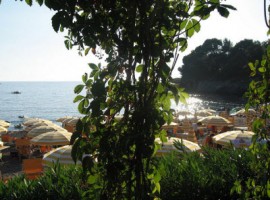 Macarro beach by Clarita via Flick

The “Grotto of Byron”, where the poet meditated

Known as “Grotto of Arpaia” as well, it is a little secret the divers share in a whisper.
Protected by a steep cliff, the little grotto can only be reached by boat and it has therefore preserved its natural environment and the clean water which put a spell on the British poet George Lord Byron who spent many an afternoon admiring the blue sea, the foamy waves impacting against the rocks and listening to the quiet sound of the sea life.
It is the perfect place for snorkeling and for a boat trip with a final splash in some crystalline like waters. 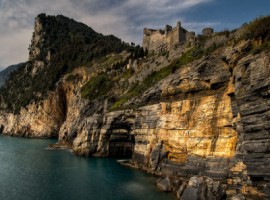 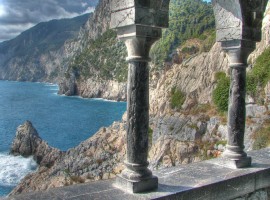 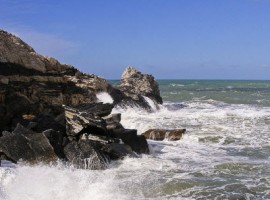 The “Turkish staircase”, the beach of the Commissario Montalbano

Named after its staircase structure and the tradition according to which the Arabian pirates used it as a refugee and a dock for their raids, the “Turkish staircase” is nowadays famous because of the Tv series and the  detective stories of “Commissario Montalbano”.
The Sicilian writer Andrea Camilleri has decided to set most of his detective stories inspiring the TV serial here in the area around Porto Empedocle, on the South Coast of Sicily. The result is that an area earlier dismissed by the tourist trends has now become one of the most visited one on the footprints of this stubborn head of the local police who keeps thinking that “when things are easy, they are usually not”.
The beaches around the “Turkish staircase” are now more popular than a few years ago and it is not that usual to have the whole beach area to yourself as it was before.
The beach closer to the “Turks” is made of quartz and shell fragments making the trip to the beach a quest for lovely stones. You may even decide to bring home one and have a lovely and unique necklace pendant. 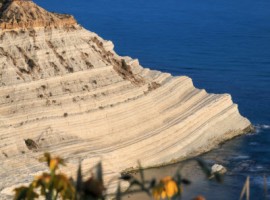 The Staircase of the Turks by Domenica Prinzivalli via Flickr 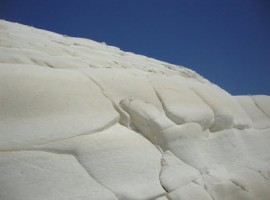 The Staircase of the Turks by Irene Grassi via Flickr 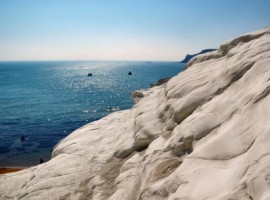 Once you park your car at the parking lot at the entry of the Vendicari Natural reserve, you are in for a big adventure.
Walk for approx.. 20 minutes and reach the old “tonnara” (the building where the tuna fishermen brought the tuna and where it was then transformed into tuna filets and less valued parts). After a short break, start your true adventure through the wild nature of this part of Sicily: a narrow path through wild rosemary and other weeds will lead you to a white sand beach and a turquoise sea, inhabited by colourful fish. It is not the Caribbean but it looks like.
Many TV commercials set in the Caribbean or in other exotic destinations are actually shot here. Can you imagine? 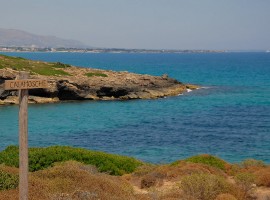 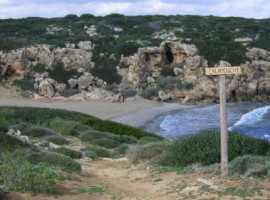 “The Two Sisters”, the most secluded cove of the Conero Riviera

This narrow strip of beach on the side of the Conero mountain will put a spell on you on condition you do not have children and your needs are extreme relax and nothing more.
Make sure you bring food, water and …a pile of books and magazines.
“The Two sisters” white beach is still wild and untouched by tourists.
It is accessible only by boat over the sea and though there are daily boat trip from Numana Port tourists seldom choose it as a final destination.
There is a steep path to reach it on foot but it is wiser not to try it.
Ah! The origin of this name, of course: the frontline of the mountain extends out into the sea and it ends in two high white rocks, the “Two Sisters”. For years they have been staying in the crystalline azure sea of this corner of coast and they will forever on. 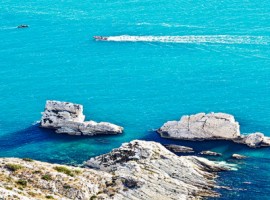 The Two Sisters by Castgen 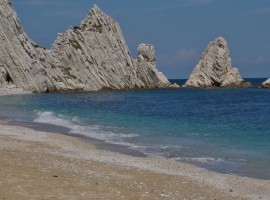 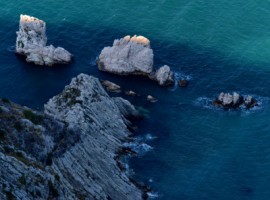 Capo Vaticano, have you already been to one of best Italian beaches?

This wonderful beach is located close to Ricadi, in the province of Vibo Valentia, Calabria, South Italy.
If only a few Italians appreciate it, most Europeans love it and the beach has been rated the “3rd best Italian beach” by the French magazine “Les Grands Voyageurs” and it is one of the “100 best world beaches” according to Trip Advisor.
What makes this beach so popular and almost famous?
The Ancient Greeks loved it so much that they called it Mantineo, a place to communicate with God.
The cove offers a series of beaches, small bays and inlets so that every sea lover can find its perfect paradise. One of the most popular beach is “Grotticelle” : soft sand, warm light azure sea, protected by the Gulf of Messina, the area is said to be a paradise for adventurous diving in search of the many boats which shipwrecked in the sea around the Capo Vaticano. 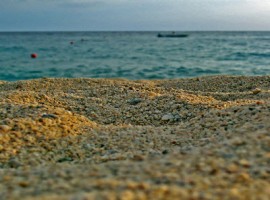 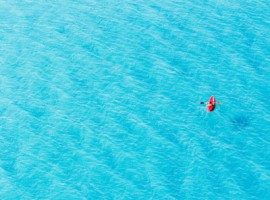 The crystalline water of Grotticelle beach by Castgen via Flickr 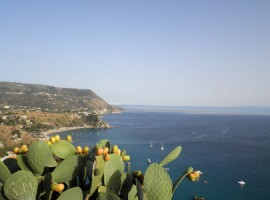 San Nicola Arcella, perfect for children holidays and for mountain lovers as well

The beach of San Nicola is in the province of Cosenza, Calabria, South Italy.

Equipped for families, the beach of San Nicola is not just a beach for families.
It is the place for a complete summer experience: separated from the rest of the territory by a rocky mountain, the beach is protected and someway private.
This duplicity sea/mountain allows tourists to find long sandy beaches and a calm sea ideal for the toddlers and kids but if you love to go trekking, just try one of the many path through the wild of the mountain.
And if you love picturesque villages, the village of San Nicola shows a unusual topography due to the presence of a steep cliff overlooking the underneath bay. 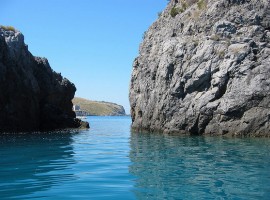 Crystalline sea at San Nicola by Diego Menna via Flickr 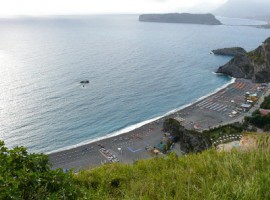 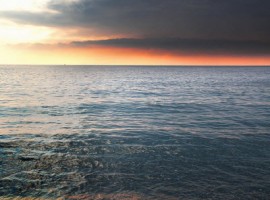 The sunset at San Nicola by Diego Menna via Flickr

Erchie is a small fishermen borough of approx. 120 inhabitants a few miles from the most renowned Amalfi. It is the perfect place for your family sea holiday: no cars and no motor vehicles of any kind are permitted; smog and traffic are faraway concepts. Children can play freely almost everywhere. The little beach has golden sand and if you are looking for a little adventure, why not reaching the “beach of the lovers” walking through a natural grotto. And the name? Once again the Ancient Greeks rocked: the name of Erchie comes from the name of an old temple dedicated to Hercules. 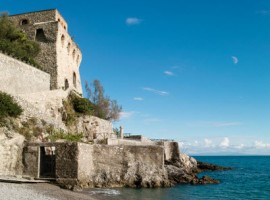 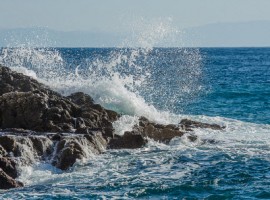 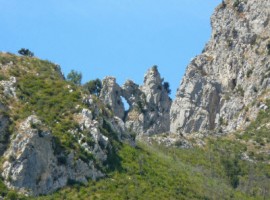 The surrounding of Erchie by Antonio Salsano via Flickr

Again the name has something Greek in it: it was the name of a beautiful mermaid whose singing spellbound each and every sailor who happened to sail by. The beaches are the favorite place for sun lovers from April to the end of October: the weather is mild and the light lasts longer than in other areas. And moreover, taking a bath here means to take a bath simultaneously in the Ionic and the Adriatic sea: Santa Maria di Leuca is someway the exact place where the two seas get together. 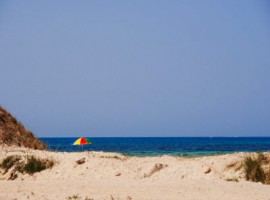 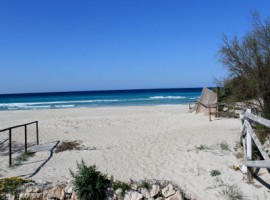 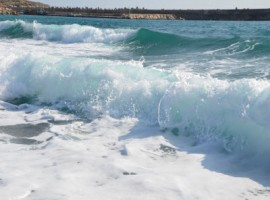 Is Arutas, a precious white desert

Road from Oristano to Cuglieri, follow signs to Tharros.

Far from the show off of the “Costa Smeralda”, the peninsula of the Sinis and its Natural Reserve will welcome you.
The destination is the ideal refugee from the world: you will be meeting few human beings, just some animals like the Sardinia deer walking on the beach, and windsurfers, who are someway not really human, are they?
Besides windsurfers, snorkelers love the beach.
The most peculiar characteristic is its white sandy beach: it is made of small fragments of white quartz going from all the shades of pink, to green and azure as well. 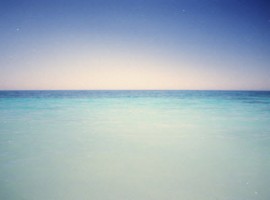 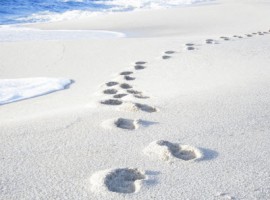 Is Arutas, the white rice sand beach by Daniele via Flickr 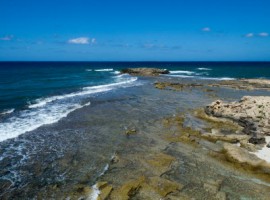