Mazes and labyrinths: symbols that occur with great frequency in human history. Their roots can be traced back to Greek mythology and Paganism, where they were regarded as mystical. It wasn’t until a few hundred years ago that mazes were designed for fun (sadists), and often became a perfect meeting place for secret lovers and cunning planners. Over time they have become associated with entrapment and enclosure as our imaginations run wild. Ever wanted to get locked in an enchanted castle and wait for your Prince Charming to come? Well, now’s your chance.

We’ve found some of the italian’s largest, craziest and highest mazes so you can loose yourself in the great tangled weave of the web for a while. They’re simply quite amazing. 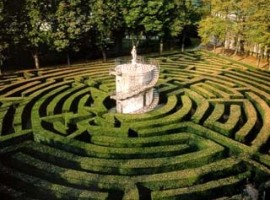 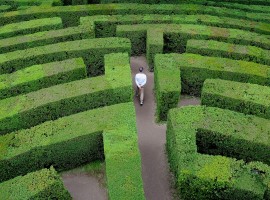 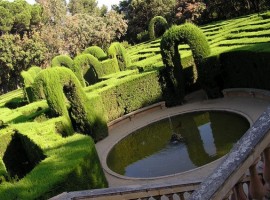 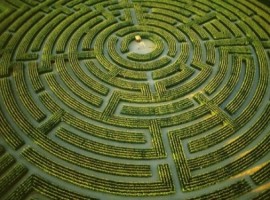 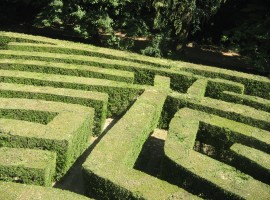 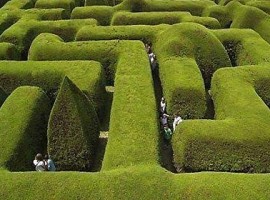 The roots of the myth

Mazes are closely linked to the myth of Knossos. Apollodorus, writer of the first century BC, describes the story of Theseus, who, thanks to the complicity of Ariadne,  manages to kill the terrible Minotaur (the monster half man and half bull) , hidden in the center deldedalo of Knossos in Crete, and then find the way out.

In greek myth the labyrinth is a prison from which you cannot escape. The Tantric art seen in the maze the mental aspect of the spirit. The ancient Egyptian labyrinth , however, reflected the structure of the universe. The American Indians think it is the passage from which it emerged and entered the world of their ancestors. In some African regions labyrinth has the form of a carousel. On the island of Malekula the maze is a game of skill, and in India the Kolam is a form of good omen. The medieval man thought to represent the path of a pilgrimage. In China, the maze has a function of defense against the assaults of male. For Buddhism the labyrinth is the image of the mandala: the process by which the cosmos was formed from its center, through a complex symbolism it allows a sort of initiatory journey that allows you to grow inwardly. We can sayt, a multiplicity of meanings, some recondite, other obvious.

The most famous today is a quadrangular Hever Castle in Kent, but all around the world you can find hundreds of every shape and size. Yes, even in Italy!

Villa Pisani and its magnificent labyrinth sung by D’Annunzio

Villa Pisani (built starting in 1721 for the noble Venetian family of St. Stephen Pisani) is, in fact, famous for its maze of boxwood hedges, one of the three hedge mazes survived until today in Italy. The park project is based on the crossing of optical axes. At the end of the stables for the horses  you can relive ancient atmosphere. In the maze game took place between the lady and knight: the lady was placed on the central tower with his face masked and the rider had to reach her, once arrived, then she revealed her true identity, but it was always a surprise. Among the suggestions of ancient and Stelio Foscarina you can retrace in his eyes a piece of history of Italian literature and enjoy an unusual and poetic landscape.

Located in the town of Stra, the maze is made up of layers of pathways in 12 concentric rings with high hedges leading to a central tower. Famously, because Napoleon had once been lost in the maze, when Hitler and Mussolini met for a chin wag there, neither of them were willing to venture into the maze in case they too got lost. Imagine the path of history then.

In the period from November to March (inclusive), in case of bad weather and high temperatures the maze is closed to visitors.
Info: Villa Pisani 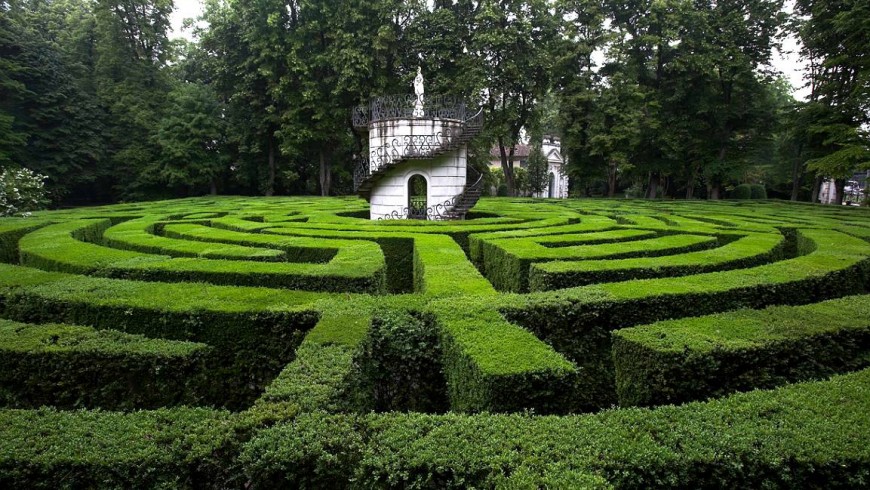 Franco Maria Ricci has always loved mazes. A little childish spirit, an eternal Peter Pan, a convinced admirer of Calvino. Franco Maria, who became famous thanks to sophisticated art books and a magazine that made history ( FMR ) designed to Fontanellato (Parma), the largest green labyrinth in the world.

The work should be in the pipeline: eight acres of labyrinth , 300 square meters, three miles of vegetable tunnels, five meters high . A labyrinth completely that climbs out of bamboo canes, from Liguria and France. The maze will fit within a much larger project, a sort of park art in collaboration with the Castles of the Duch , with a museums and conference rooms: a dream for every novel patron of the twenty-first century. This wonderful intellectual amusement park will allow visitors to spend a different Sunday, enjoying the works of art but also to having fun. There will be benches, lawns, ice cream , accordion players , and then the big maze. ” I have discussed about mazes throughout life, with Italo Calvino, with Roland Barthes, with Jorge Luis Borges . He was obsessed, constantly quoted them in his stories, as in the theme of the traitor and the hero. Borges was a guest in my house twenty days, in the eighties, and it was then that I began to think of building a veritable labyrinth. ”

Info: to know the date of the inauguration, Association Castles of the Duchy ,  info@castellidelducato.it 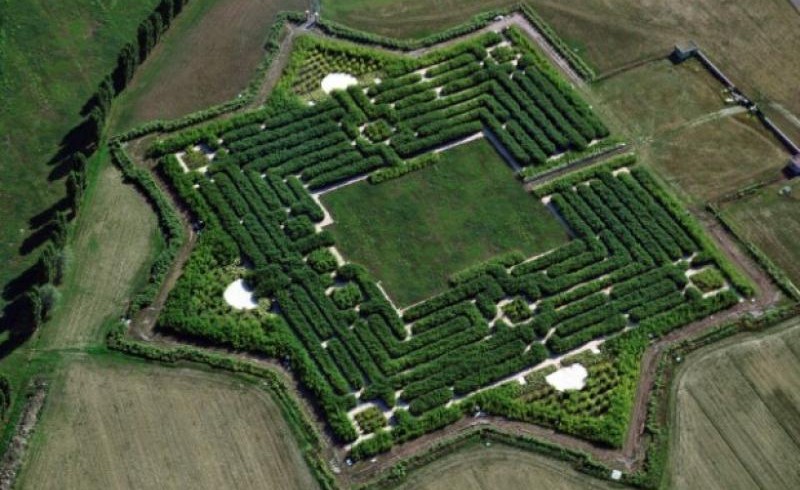 Pinocchio rules in the Maze of Villa Garzoni in Collodi

A ” friendly ” building of the 600 hides a lovely labyrinth, which separates the garden from the house. The taste is exquisitely Baroque. The labyrinth becomes the prelude to the shady area that led to places of  encounter between knights and ladies.
Designed by Romano Garzoni, amateur architect fond of botany, as many gentlemen of the seventeenth century Lucc; he designed this sumptuous and redundant glimpse of the garden. 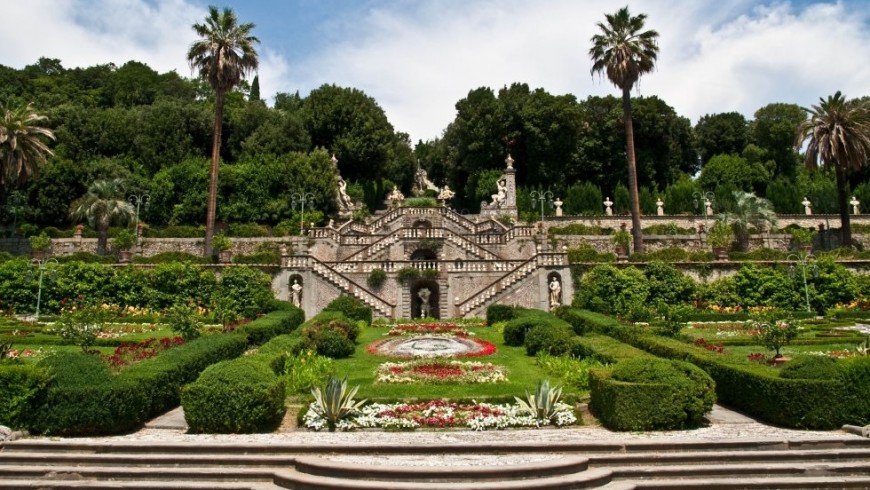 The mirrors and the Minotaur in Padua

The Castle of St. Pelagius  was entirely remodeled by the Counts Zaborra to better perform the functions to which agriculture has always been used .
Two labyrinths enclosed in this treasure trove of walls: that of the minotaur and the one of the mirrors.

The Minotaur, which is at the center of the maze, can be reached after many mistakes and stumble. You will come across a small plane, like a modern Icarus …

The mirror maze was created in the early 1700s, and is said to be once of the world’s most complicated. 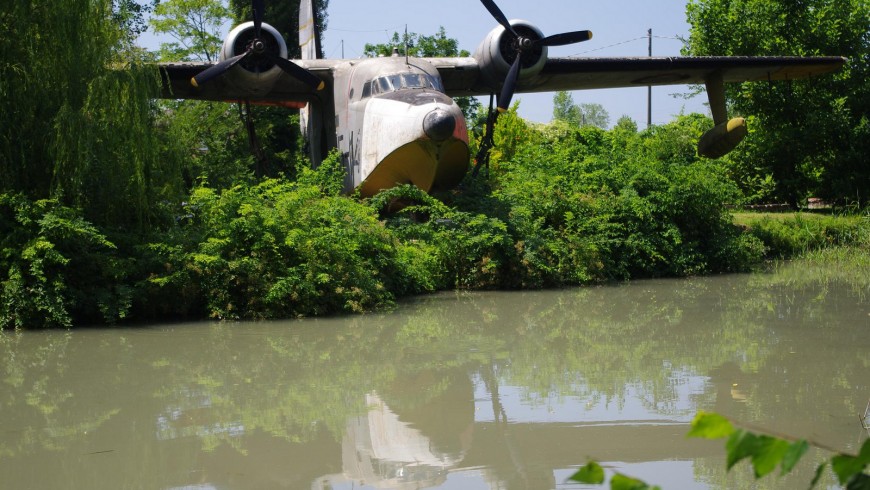 Masino castle, thanks to its strategic location that allowed control over a large territory between Ivrea it had very ancient origins: it was originally a simple fortification with a square corner towers.  The maze, inside the botanical garden, offers a lot of paths. You really wouldn’t want to get lost! 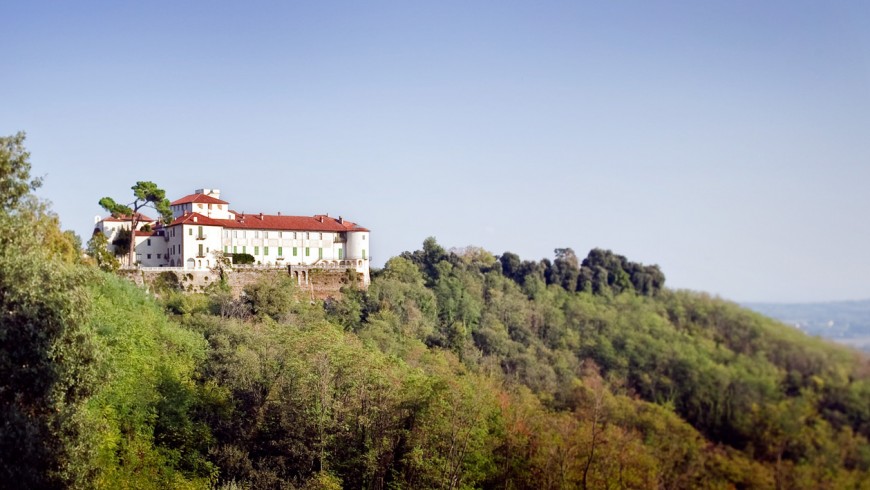 Not only luthiers: in Cremona you can find a beautiful Labyrinth…

In the Park of Prehistory in Cremona, an ancient woodland on the left bank of the river Adda, yoc can als enjoy the charm of the labyrinth, built with massive and dense hedges, the best reminiscences fairytale for adults and children.
Info: Cremona maze 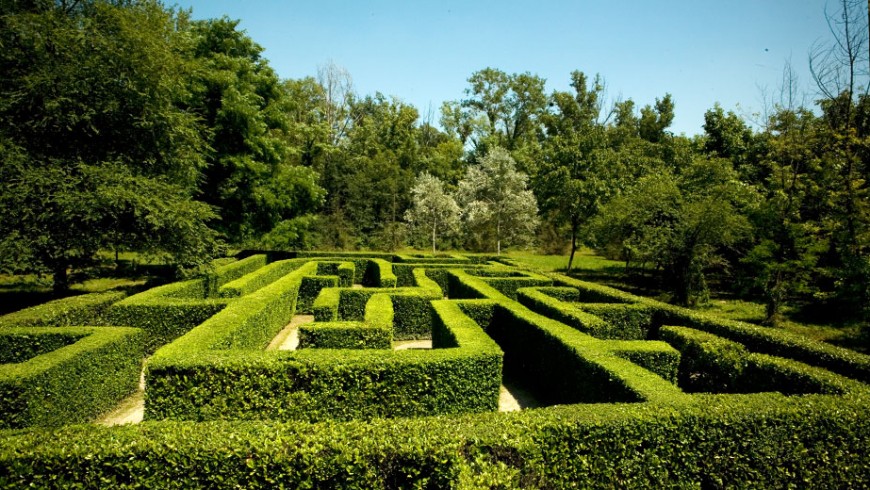 The wine maze of Kränzelhof in Merano

The Garden/Labyrinth of Kränzel: the idea of the labyrinth was born under the constellation of the estate and the extension of the area.
One of a kind example of agriculture in South Tyrol, it has become an ecological exmple, as well as visual. You will come across traditional blooms, love and respect for nature.
In autumn 2003 the first orchards were planted. During the spring it was built the labyrinth structure designed by Gernot Candolini and planted vineyards. Thus the heart of the garden began to bea .
Then followed other measures relating to other structures on the estate: the theater , the terraces, the pool and other elements that make up the entire body of the park consists of the estate, from the production and all the people who live and work there .
A grain of green not to be missed .

The Boboli Gardens and the example of Tuscan maze

Still a powerful dive in history: this will be the time to amaze us glimpses flowering of the Boboli Gardens , in the wonderful park of the palace of the Medici . Undisputed Wonder of Florence, this geometry hedges and bushes surrounding the famous Fountain of Mostaccini , whose sequence of waterfalls is an exceptional example of seventeenth-century antique troughs for decoy birds , which are used in the practice of bird . Similarly, looking and ragnaie , all that remains of the primitive architecture green garden along in search of the remains of the monumental , mazes whose use and conception was at the time , full of mythical and allegorical meanings .
A appuntameno with our history not to be missed. 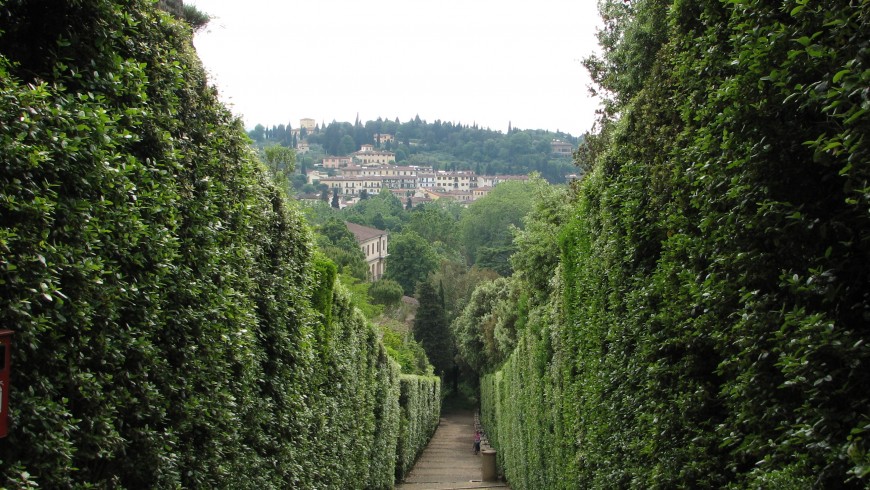 The exception: the masonry maze of DonnaFugata

We want to conclude this excursus on the green maze with an example of a stone labyrinth: the of the Castle of Donnafugata Ragusa, Sicily.
The style of the castle is not predefined and does not coincide with the imaginary classic, but is characterized by a set of different architectural and artistic elements: built on an ancient building with Gothic elements – Venetian (especially the loggia with trefoil arches).
The castle is surrounded by a large park where you will find some distractions that had to entertain guests, such as the temple of circular shape below which there are artificial caves which are actually fake stalactites, or the stone labyrinth, particularly striking and made according to the traditional construction of the entire territory of Ragusa of dry stone wall . 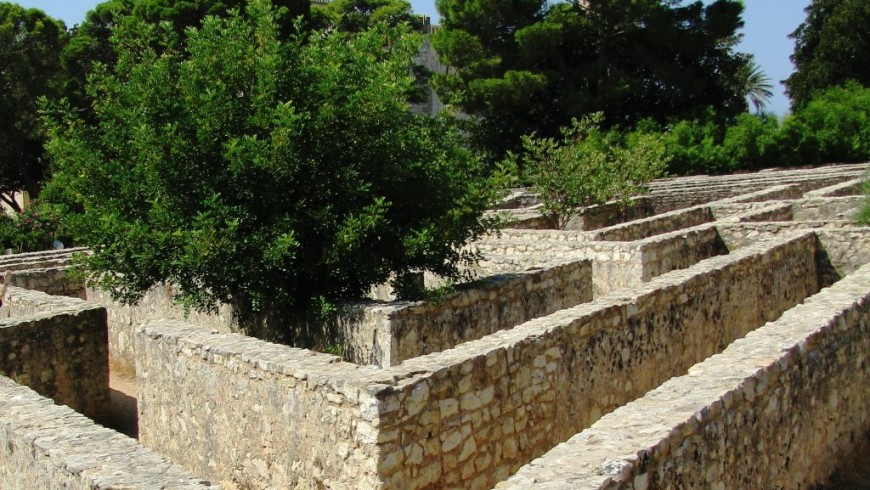 Our short journey through intricate mazes of Italy  just wants to be a fun starting point for traveling to reclaim the ancient taste of homegrown beauties. Beauties that are not limited to satisfaction of the eye but often also of the spirit.
A good starting point for players to relive those mysterious realities that have populated novels and short stories, sung by poets and romantics … Look upon by the myth of getting lost to find themselves, as a metaphor of the life of each one: get up and return to the path, however difficult, is a clear sign of inner evolution .