Starting your journey to discover the places requires a certain amount of preparation, walking sometimes becomes a challenge with yourself, when you are walking you can look into yourself, and you have the opportunity to reflect … looking outside!

In recent decades, the Via Francigena, the way that in ancient times was the way of faith for pilgrims, has became every day more popular.

Today this road, which connects Rome to Canterbury, has become a way of slow path for travelers, through landscapes of extraordinary beauty. 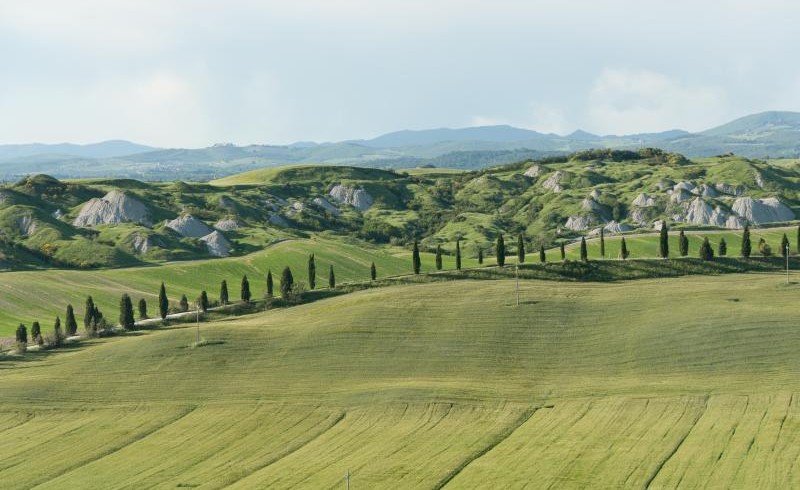 Walking in Val d’Orcia, along Via Francigena, is like taking a trip back in time. You can revive a ancient charm and atmosphere, when the archbishop Sigerico, back in the year 990 AD, began the journey back to the time of Canterbury, after being Rome in the presence of the Pope, from whom he received the pallium, the symbol of his new role.

Unpaved paths are to be filled with images and sensations, because the whole territory around it offers tours of amazing variety and richness, where every year is more and more the number of new pilgrims. 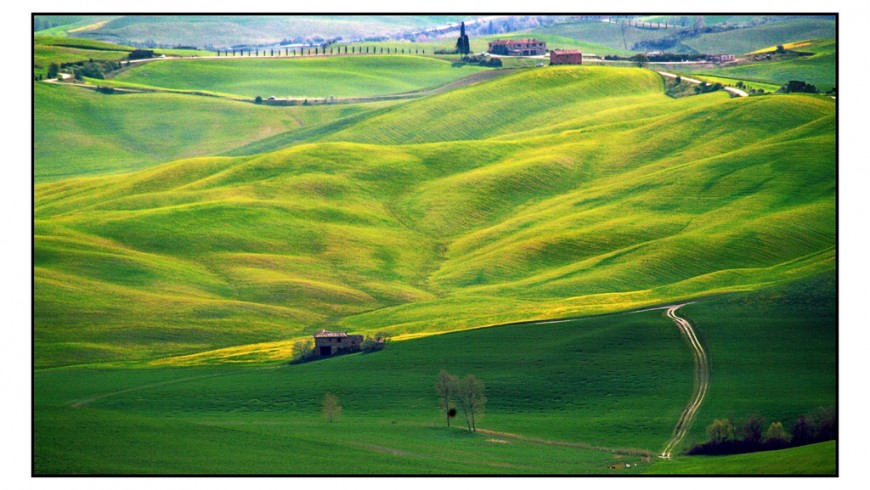 Val d’Orcia, near Siena, photo by Context Travel, via Flickr

Along the Via Francigena there are several areas of particular natural beauty and historical and artistic value. One of the best is certainly the Val d’Orcia, which is also an important natural, artistic and cultural park. In 2004, Val d’Orcia, was included by UNESCO as world heritage landscape area, with the following reasons:

The ancient journey of the Archbishop followed the route of the Via Cassia, to arrive in Tuscany, in Radicofani, and then go through the Val d’Orcia, a really oasis of beauty.
You will be amazed (“a bocca aperta” in italian language) in front of the waves that form the wheat fields adapting to the soil, seeing the rows of cypress trees that climb the zig-zag on the ridges of the hills, or the farmhouses that seem to enjoy this splendid isolation from reality. 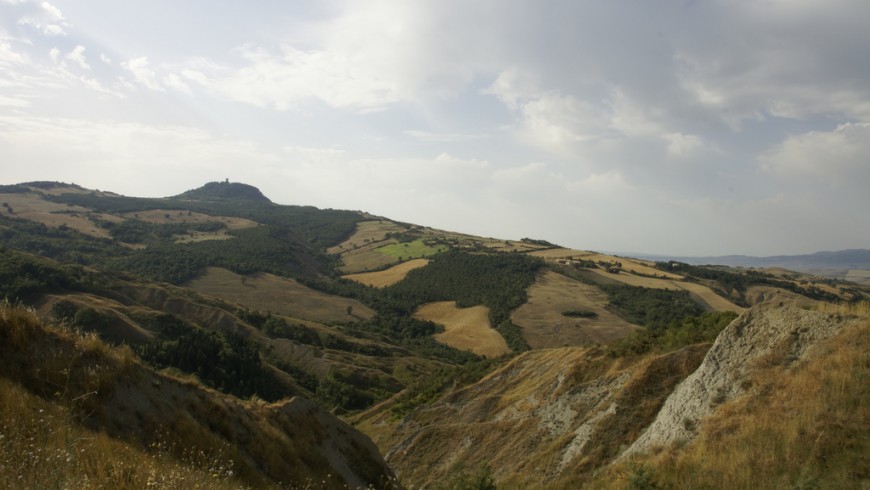 Via Francigena from Siena to Viterbo looking Radicofani, photo by Alessandro Mulas, via Flickr

The village of Radicofani located on a cliff of basalt at 813 m above sea level, dominated by the ruins of a castle from which, in the X century, was controlled the transit of pilgrims to Rome. Going down from the country and walking about 5 minutes, you will reach the village of Voltole, one of the places visited by Sigerico.

Along the next stop of the journey, perhaps the hardest and sunny part, you can meet the Ricorsi, an ancient pilgrims hostel and the ruins of the Briccole hospitable, another ancient shelter for travelers.

In Castiglione d’Orcia, even if the country does not fall your original itinerary, you can reach the village with a deviation of a few kilometers, to admire the magnificent fortress of Aldebrandeschi, located at a point so high, to give a spectacular view over the valley.

In Castiglione d’Orcia, you can also stay in Agriturismo Grossola, an old stone farmhouse dating back to the fifteenth century, situated on a hill at 400 m, overlooking one of the few unspoiled places of Tuscany. (Starting from 37 € per person). 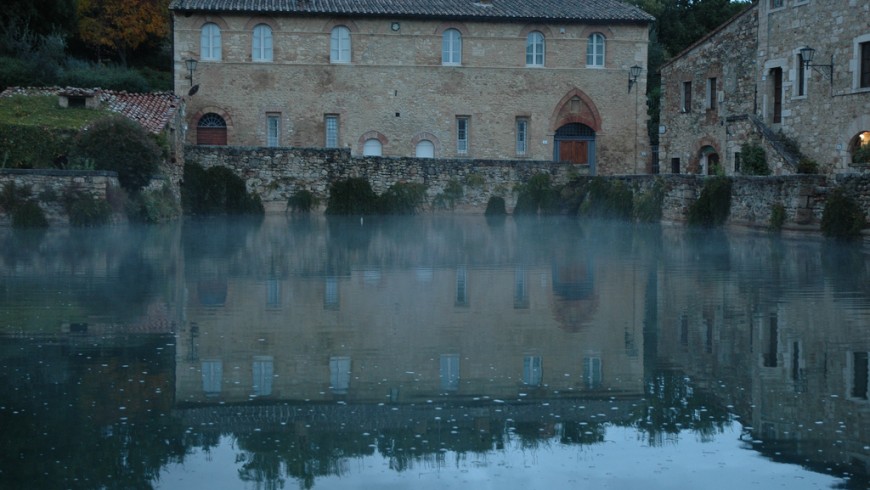 Going down again and going along the main road you will cross the Orcia river and you will reach Bagno Vignoni, a thermal resort, characterized by the so-called “Vasca”, a large tub of water, which comes from a volcanic source, known since Roman times, appreciated by Saint Catherine and Lorenzo the Magnificent.

Going up to a height of over 200m you will arrive at Vignoni where you can enjoy a beautiful view, the castle of Vignoni Alta, from which you can see to the south, the massive Amiata.

Continuing towards San Quirico, there is the church of Santa Maria di Vitaleta, once the site of an ancient hospital.

Once Reached San Quirico, inside the walls, dotted with 14 towers, you will descover the collegiate church of SS. Quirico and Giuditta and Leonini, an example of Italian garden, in Renaissance style, made at the end of XVI century.

This is the last stop of the Via Francigena inside the Val d’Orcia, before going to the val d’Arbia. 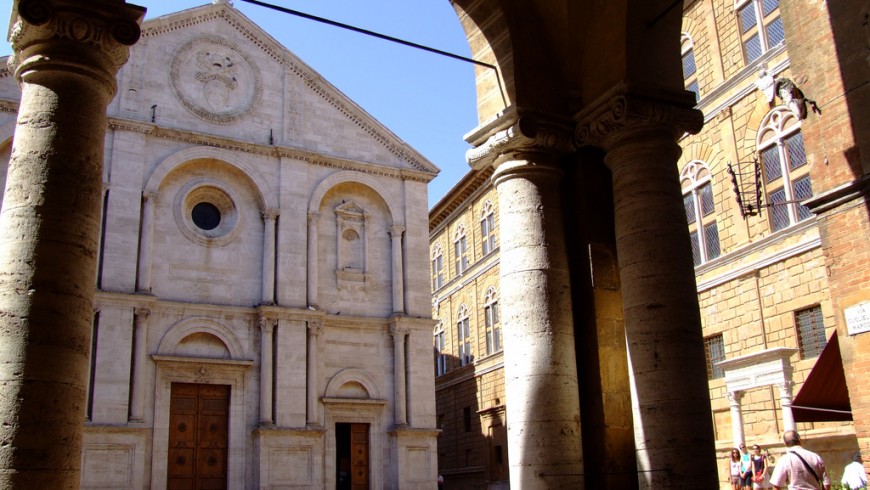 In this itinerary, in addition to the beautiful landscape celebrated by painters of the Sienese school, there is the town of Pienza, portrayed by the artists of the Renaissance and known as the “ideal city” designed by Pius II, great humanist Pope.
Here you can admire the magnificent trapezoidal piazza, surrounded by the Cathedral (1459) by Bernardo Rossellini, Palazzo Borgia and Palazzo Piccolomini.

Further on, on the border with the Chiana Valley, lies the town of Montepulciano, a town full of charm, where the Renaissance and Middle Ages blend … where you can witness the challenge of Bravio delle Botti (last Sunday of the month of August), between the eight districts of the old town, enjoying the precious Nobile di Montepulciano wine. 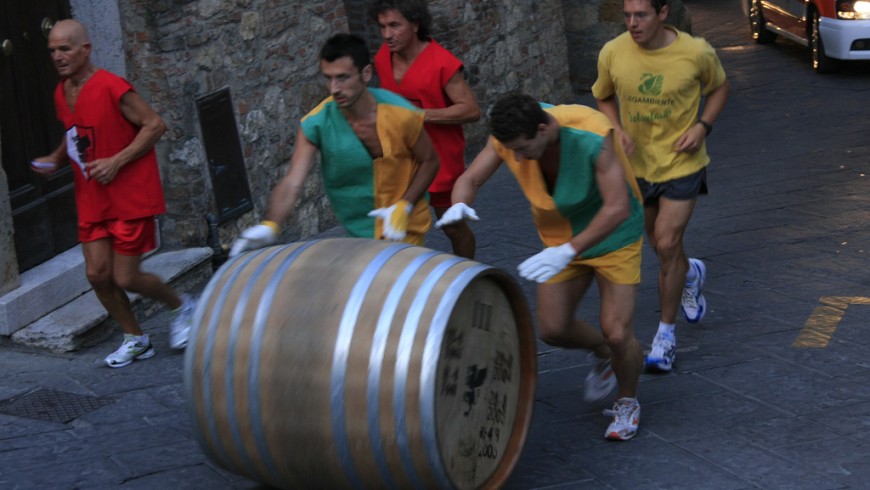 Visited the towns of Pienza and Montepulciano, crossing again the river Orcia, you can reach to the town of Montalcino (home of Brunello di Montalcino, one of the most famous italian wines) to fully enjoy the flavors and the view of gentle hills and valleys.

In these beautiful places you will have the impression of being part of a Renaissance painting. There are no words to describe the landscape of the Val d’Orcia, which takes different colors in each season.

Yes, the Val d’Orcia is just that, a world apart, with its rhythms, its noises and its silences.

Of course, do not forget to bring a camera! The show is guaranteed!