Active or extinct, full of history or surrounded by the sea, volcanoes are extremely fascinating natural phenomena that show the greatness of our Planet. Visiting a volcano can be an incredible journey into Earth and humanity’s history, but also a poetic experience one-on-one with burning rocks and fire. Adventure-lovers, here there are 5 ideas for an eco-friendly holiday at the foot of a volcano

Volcanoes are among the natural phenomena that most fascinate mankind. Since forever, volcano stimulates writers, poets, artists and photographers’ imagination. In his “Journey to the Centre of the Earth” (1864) Jules Verne imagined to go down the crater of the Snaefellsjokull volcano, in Iceland, and to reemerge from Stromboli, in Sicily.

In addition to being one of the greatest spectacles in the world, volcanoes express our Planet’s magnificence, man’s littleness in front of nature. Let’s go and discover 5 among the most evocative volcanoes in the world.

1. On the highest volcano of Europe 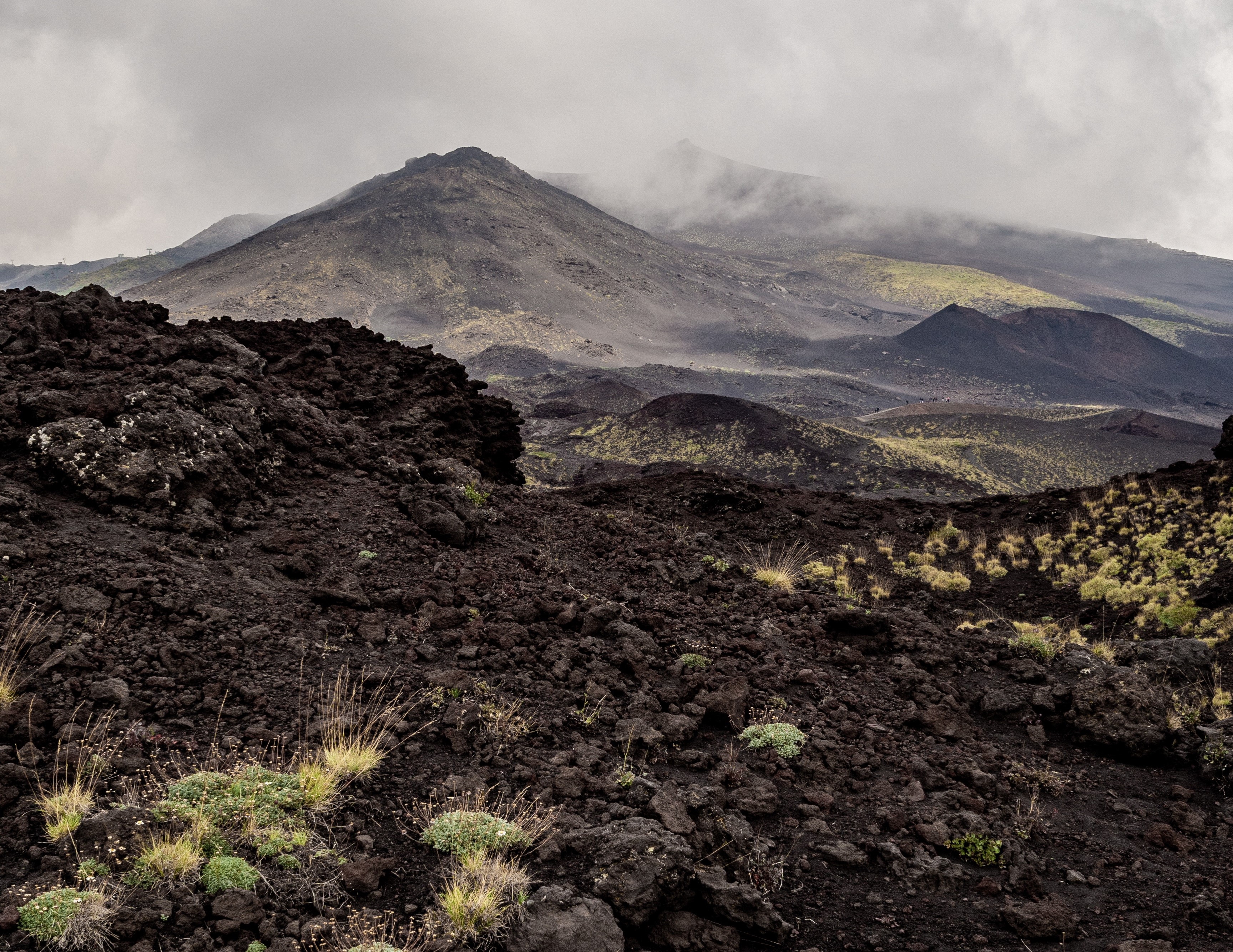 Etna is a volcano in the province of Catania, Italy, photo by Jonas Tebbe on Unsplash

In the province of Catania, there is the most active volcano in Europe: Mount Etna. On average, it is higher than 3.300 m (the height varies depending on the eruptions) and it is part of the UNESCO heritage. You can visit the volcano in different ways, always accompanied by expert guides. They will escort you up to the craters on the top in complete safety.

If you have some time, you could make use of the train that travels around the base of the volcano, from one village to the other, giving you breathtaking glimpses. The most adventurous and trained can walk or ride a bike for the whole path; otherwise, there is a cable car, which after a 30€ payment, will bring you 400 m under the last reachable crater. You can also climb down this crater.

In conclusion, Etna has what it takes to give you an unforgettable experience close to a unique and particular nature, in a land full of history and archaeology.

Where to sleep: Look for your perfect eco-friendly structure among the ones in the province of Catania.

Must-do: An excursion on Mount Etna, from the upper craters to the caves, is surely the best way to make the most out of a trip to this mysterious place full of adventures.

2. Teide, the remains of Atlas 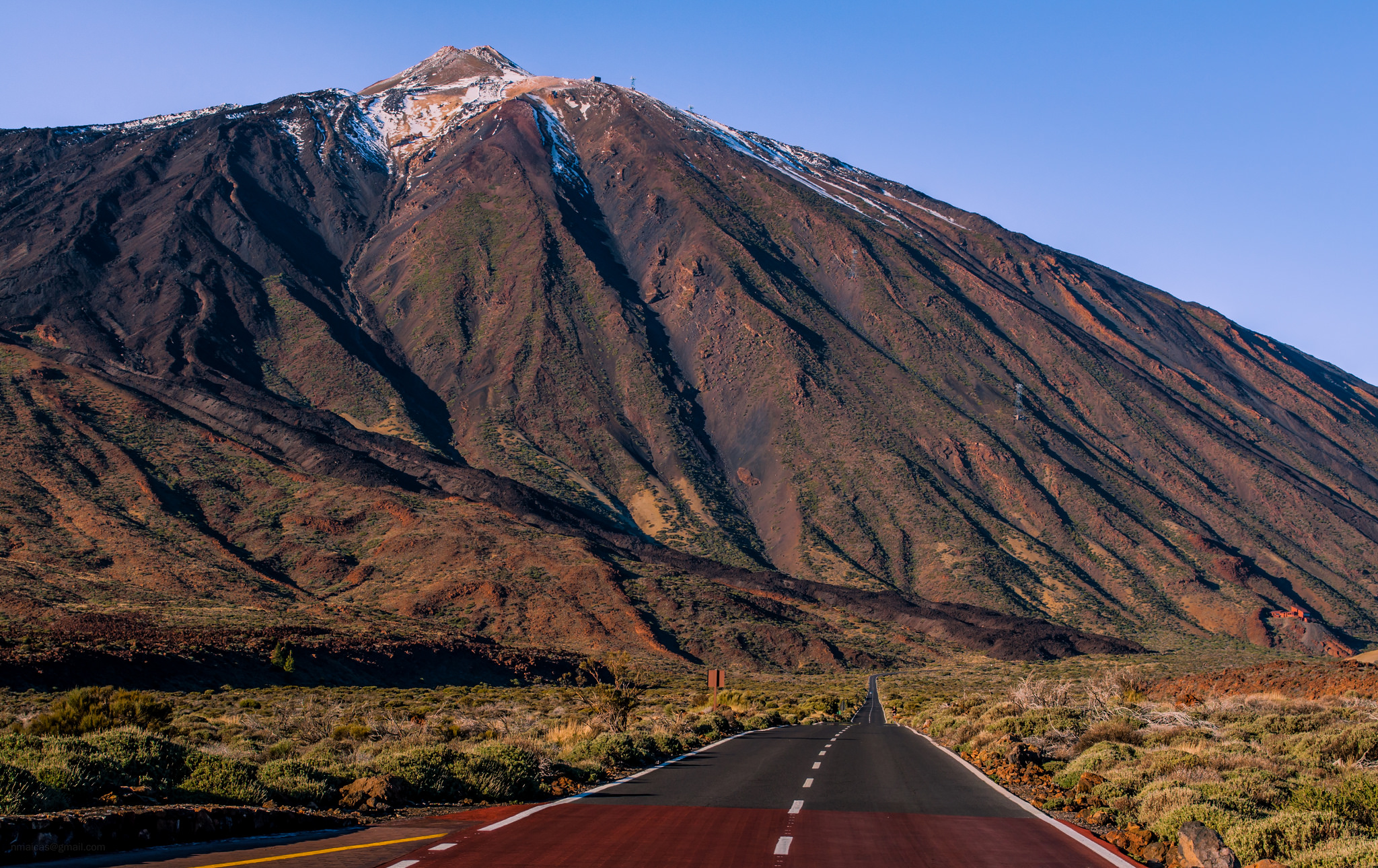 Teide, the volcano on Tenerife Island, photo by Natalio on Flickr

On the island of Tenerife, in the Teide National Park there is the volcano of the same name. Teide is the third highest volcano in the world, more than 3.700 m and it’s part of the UNESCO heritage. Its long evolutionary history is fascinating: in olden times, the volcano was much bigger than today, but a violent explosion blew its top, creating a caldera. Today it is no longer observable, because the following eruptions filled it, forming the plain of Las Cañadas. Even though activities have not been registered since 1909, Teide is still active and this makes the trip to its lunar landscapes even more exciting.

You can visit the volcano with tours led by an expert guide and you can choose to climb up on foot or with the cable car. The guided tours divide in more price categories, depending on the stops that you choose to make (for example, at the astronomical observatory), or on the type (for example, the exploration of Teide after the sunset). If you feel like testing your abilities, you can also adventure up the mountain on your own, even at night. The area of the park and the cable car can be reached both by car and by bus.

Where to sleep: In Tenerife you will find the eco-hosts most suitable to your needs.

Must-do: Visit to the National Park is necessary if you stop in the Canaries. The park is the most visited in Spain and cover the area of Teide and the other volcano, the Pico Vjejo, of Las Cañadas, of Los Roques de García (spectacular rock formations) and an astronomical observatory. The ideal spot for the perfect view on the entire archipelago.

3. Trip to Thera, the downfall of Minos 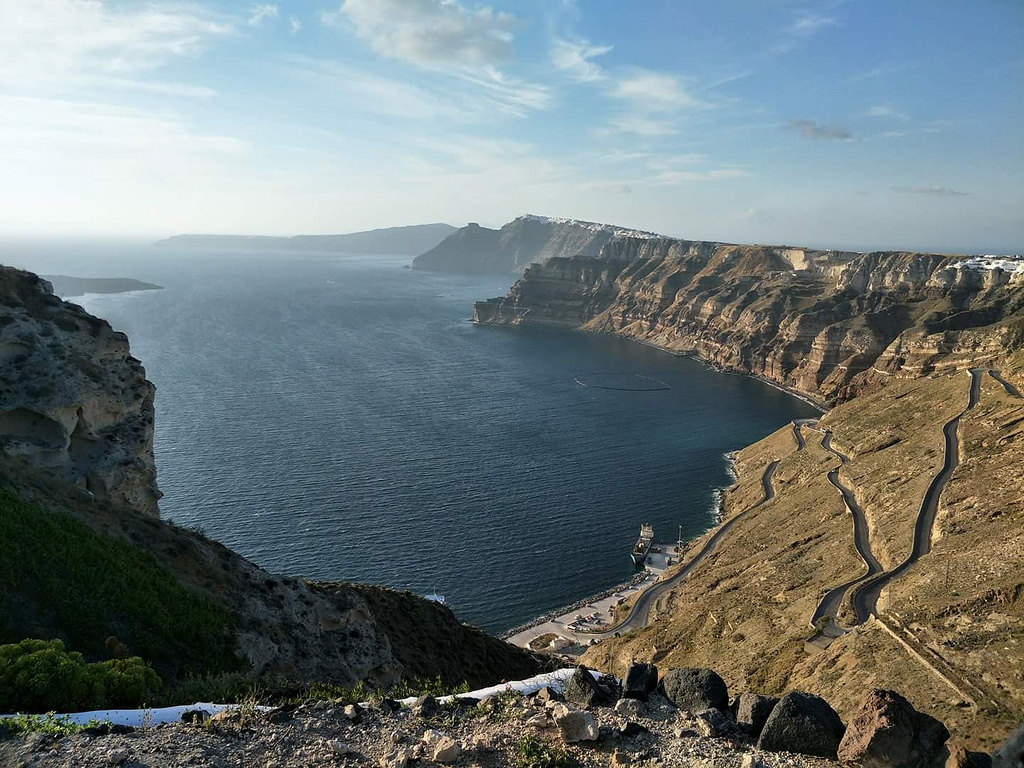 The caldera of Thera, in Santorini, photo by lefkowitz.michael on Flickr

The explosion of Thera was maybe the most extraordinary in man’s history. According to many historians, the damage it caused, like rock rains, meteorological alterations and tsunamis, are the beginning of the Minoan civilization’s downfall. This ancient society lived in Crete around 2000 years b. C. This explosion blew the island of Santorini (in the Cyclades archipelago) up, leaving in exchange its famous caldera, able to offer dreamy sunsets and landscapes.

You can explore the caldera by booking one of the many tours. We suggest the one on the characteristic sailboat, or the one at sunset, because of the stunning colors you can admire. Other tours and other guides can accompany you on land, along the borders of the crater. We recommend to dress comfortably, to use sport shoes and something to shelter from the sun.

Where to sleep: In Santorini, you can enjoy a stay in a luxurious windmill turned into a charming eco-facility, with a spectacular view on the caldera of the former volcano.

Must-do: Visit the island of Nea Kameni and Palea Kameni, in the center of the ancient explosion. In spite of the massive presence of organized tours (and so, people), it is worth a visit. It’s an excellent point of observation to understand that, under the sea’s surface, the volcano is still active.

4. Vesuvius, between archaeology and nature 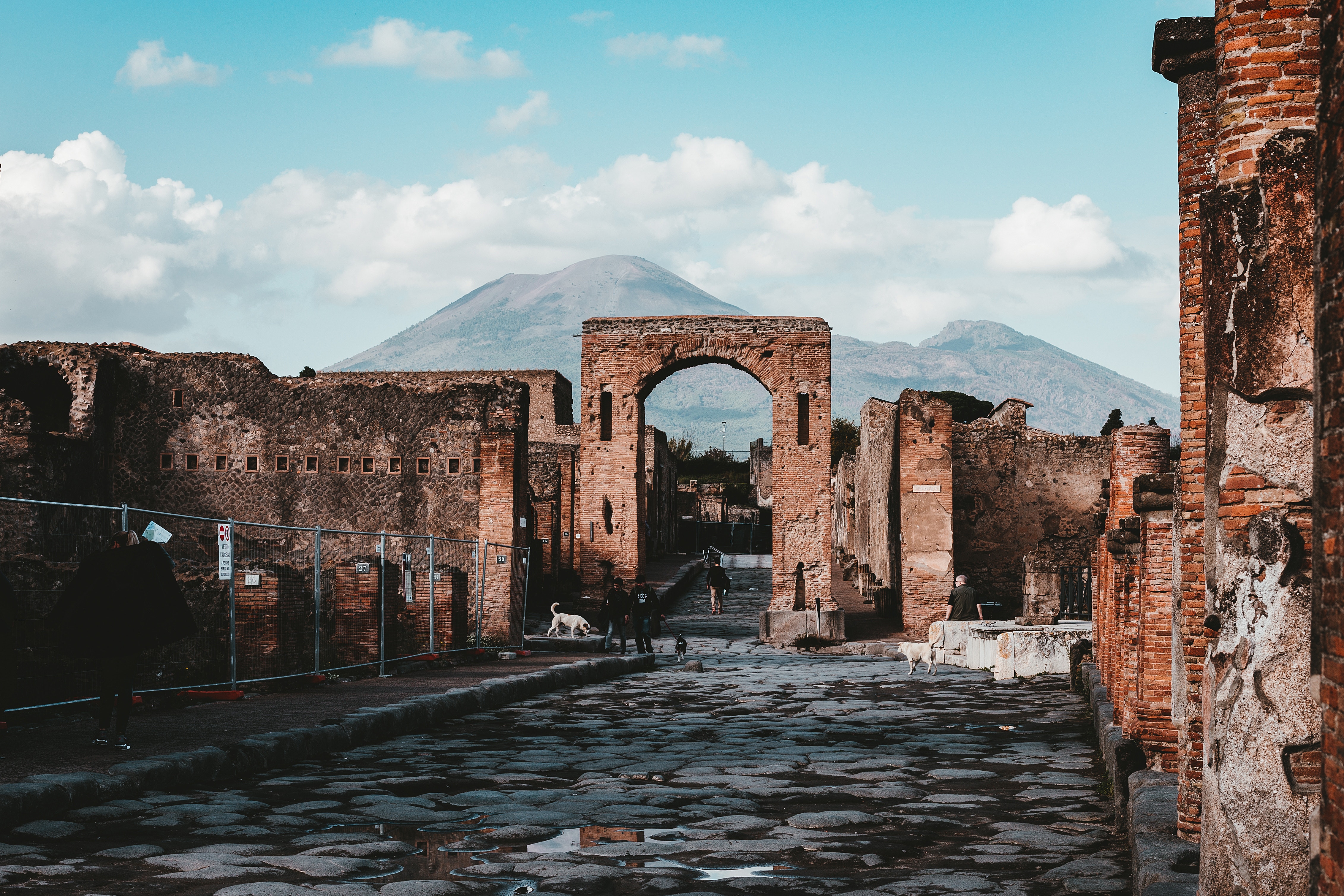 Vesuvius in the background of Pompeii’s ruins, photo by Andy Holmes on Unsplash

We couldn’t leave out of our list one of the most famous volcanoes in history: Vesuvius, overlooking Naples’s Gulf. Responsible of the eruption in 79 a. C. (and many more) that destroyed the cities of Pompeii and Herculaneum told by Pliny the Elder, the volcano is still constantly monitored. In fact, even though it has been dormant since 1944, it is still active. Moreover, the area at his foot is highly dense populated: It makes the situation potentially far more dangerous, because it is not possible to predict when it will resume its activity.

In 1841, the first Vulcanological Observatory in the world was built on its slopes. Currently dormant, Vesuvius is formed by two volcanic structures: The Gran Cono (Large Cone), the most recent, and the Monte Somma, the former volcano.

Considered the most beautiful place for volcano lovers, you can visit Mount Vesuvius even without a guide. Starting from a large car park, the half-an-hour walking path goes up to the top. There you can walk along the border of the crater, look in its depths and admire the internal walls, which are still smoking.

Once you’ve reached to top of the volcano, the show is impressing: You can enjoy the breathtaking view on Naples’s Gulf, glimpsing even the islands of Capri and Ischia.

The Vesuvius National Park protects the variety of animal and vegetal species of the area and the agriculture developed on the fertile slopes of the cone, characterized by unique flavors. To discover the heart of National Park there are 9 thematic paths for a total of 54 walking km. 6 of these itineraries are ring-like: The Hell Valley, Along the “Cognoli”, Mount Summa, the “Tirone” Reserve, the “Gran Cono”, the rack railway. In addition, there are an educational path (the Lava River), a panoramic path (the “Matrone” Road) and an agricultural path (the big valley of “Profica”).

Where to sleep: Naples’s Gulf offers many opportunities of eco-friendly accommodation and it will not be difficult to find the B&B of your dreams.

Must-do: Visit the Archaeological Excavations of Pompeii: Its ruins and Herculaneum are part of the UNESCO heritage. In Pompeii, you will have the chance to visit a perfectly preserved true Roman city of the I century a. C. You can admire its buildings, the frescoes and the mosaics of priceless historical and artistic value. 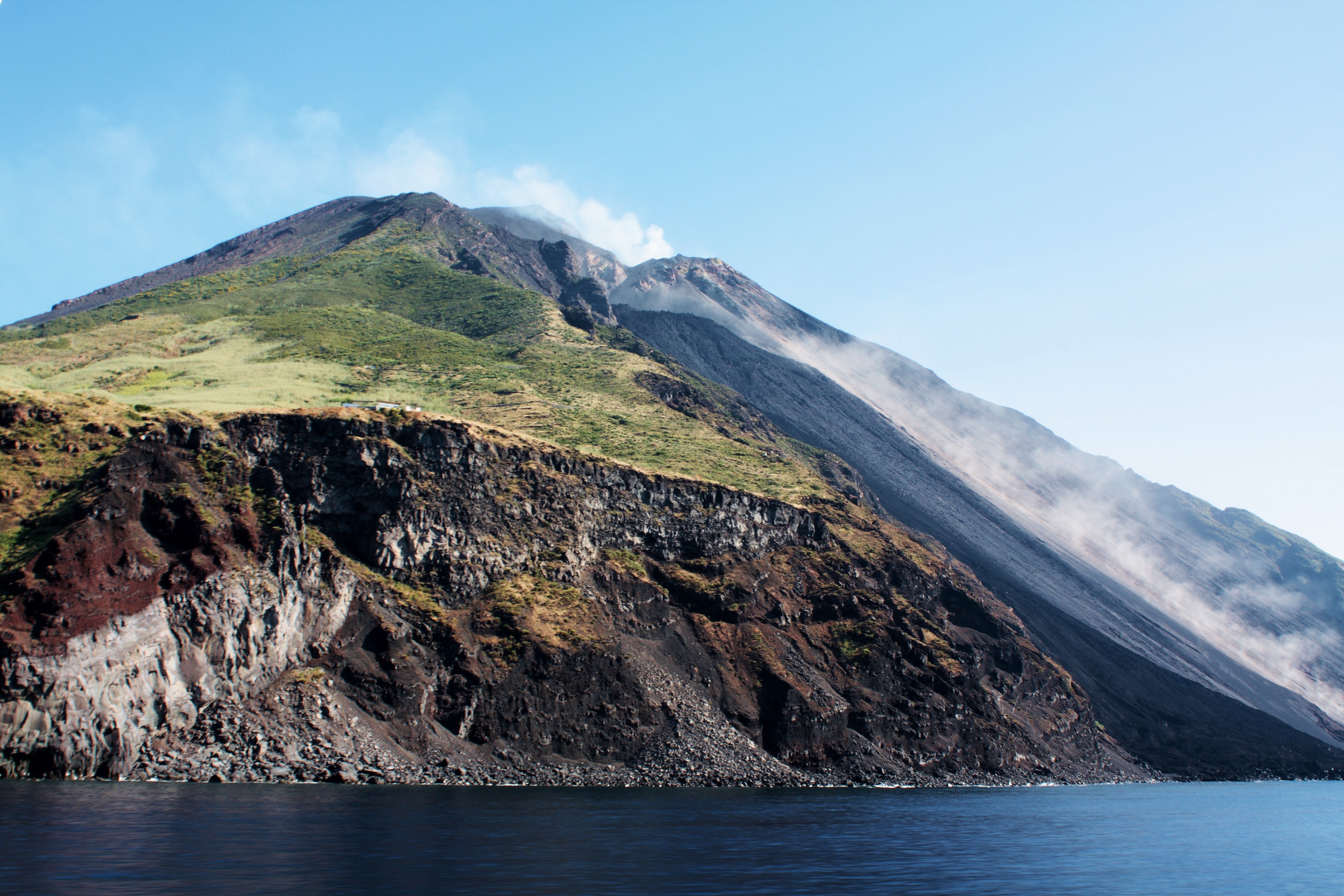 Stromboli, on the Aeolian Island of the same name

Stromboli is the northernmost island of the Aeolian Archipelago, in the province of Messina. This volcano is one of the most active in the world: There are explosive activities many times a day, almost every 15-20 minutes. Luckily, most of them don’t cause any damage to people or things.

Accompanied by expert guides it is possible to wander on its slopes, but only at sunsets and never alone. The hike, despite the not excessive height of the mountain, is not easy: It takes at least 3 hours, breaks included. The guides will give you all the equipment you may need (helmet, special glasses and, if that’s the case, pocket lamps), for 15 or 30 € per person.

The “Lighthouse of the Mediterranean” (a noun that comes from its continuous brief eruptions) is characterized by a lunar landscape, with dark colors, gray vegetation and steep slopes. On the top, you can walk around its 3 craters and enjoy the magnificent show of the lava that falls into the sea. Usually the walk back happens when the moon is already up in the sky and lights the way.

The island is reachable by ferryboat from the Sicilian coasts and from Naples: Even the ferry journey alone is an experience worth trying.

Where to sleep: The little island of Stromboli and its picturesque villages will welcome you in the best of ways!

Must-do: Visit Ginostra: This little village of 40 souls is the starting point of a slightly more challenging climb of the volcano. It is much more evocative because it coasts the “Sciara of Fire”, the path made by centuries of lava.

Canaries, a paradise in the ocean

3 off beaten trails in Sicily: the wild East and Nebrodi mountains

An unforgettable holiday among Greece’s colors