Since 400 years the Bald Ibis is extinct in throughout the wilds of Europe, and even the few natural colonies in the Middle East and in North Africa are struggling to proliferate, at the risk of extinction.
Fortunately, however, the partnership between WWF and Waldrappteam, an Austrian association that deals with Ibis breeded in captivity, seems to have moved a significant progress for the reintroduction of young specimens in Europe. 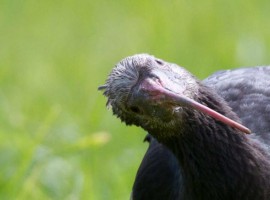 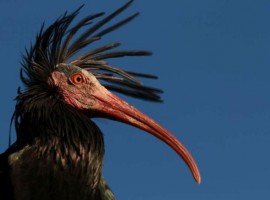 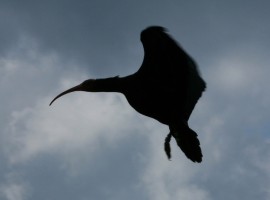 It may not be the most beautiful of birds, with his bare and wrinkled head and jet black plumage, but the Bald Ibis (Geronticus eremita) is a bird that in ancient cultures has always had a high regard, from the Egyptians who saw in him the reincarnation of the gods’ scribe, and therefore sacred symbol, which bore the hieroglyphic meaning of splendor.

Another symbolism linked to the figure at the Ibis is fertility, since it is said that it was one of the first species made down the ark by Noah, and by the fact that their return from winter migration coincides with the ripening of the fruits of the earth.

Why, then, the Bald Ibis has seen a slow but inexorable decline over the years? The extinction in the European territory is due to the combination of several factors, of which the most influential were illegal hunting and the excessive presence of human because of farming and intensive crops that have gradually destroyed their natural habitat and disturbed migration routes.

Nowadays natural colonies arrive only to 550 specimens that still make it hard to reproduce, so the future existence of Ibis heavily depends on human commitment in completing projects of reintroduction of the species. 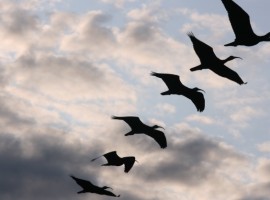 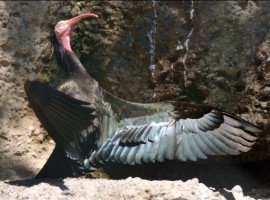 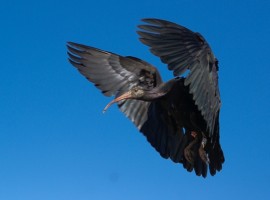 The WWF and Waldrappteam’s project

The most important contribution to the re-introduction of the Bald Ibis in European nature, in recent years, is the one that sees the collaboration of Waldrappteam, the Austrian association for the protection of these birds, with the plan Life + Biodiversity WWF.

The target of Waldrappteam, through the project Reason for Hope, is to breed chicks born in captivity in the zoo of Salzburg and teach them to fly along the ancient migratory route for wintering, so as to become autonomous and rebuild the future of species.

In this project Corinna and Anne-Gabriela, two Austrian biologists of 25 and 27 years, have had and still have a key role of human moms Ibis, who have brought up chicks from birth, establishing a relationship of trust and complicity necessary for driving their migration.

The girls, in fact, using the imprinting studied by Nobel laureate Konrad Lorenz, have literally driven the migration of their 14 young Ibis with the use of ultralight aircraft, to let them learn the migration route and allow them to follow it on their own in the future.

Over the Alps, through strong drafts and under the possible attacks of other large birds such as eagles to protect their nest, Corinna and Anne-Gabriela faced with their Ibis over 800 km of flight in 11 days, from the Salzburg’s Zoological park to the WWF Oasis of Orbetello, Tuscany, place that since 2002 welcomes Ibis for the wintering period, this time not transported by man. 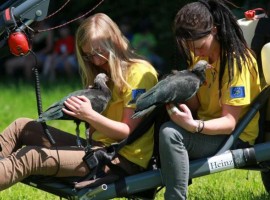 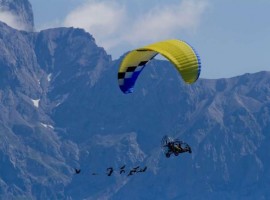 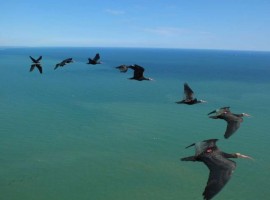 The Oasis of Orbetello

The WWF Oasis of Orbetello, in Ceriolo, is the largest lagoon in the Tyrrhenian and thanks to the location along the migratory routes, during the winter it sees the concentration of thousands of species of birds that come here to spend the winter.
Therefore this is the ideal place for the Bald Ibis to spend the colder months, from September to April, for they have a protected area rich in nutrients. Here they can rejuvenate and grow, and then independently take the journey of migration.
In previous years the Bald Ibis had been brought here from Austria, but the adventurous flight on board the motorized paraglider with which Corinna and Anne-Gabriela drove their 14 children is a huge step for the independence and the survival in nature of these spectacular birds.
The Oasis of Orbetello is open to visits from September 1st to May 1st, a unique opportunity to observe the beautiful variety of bird species that too often are threatened by illegal hunting and the human intrusion in natural habitats. 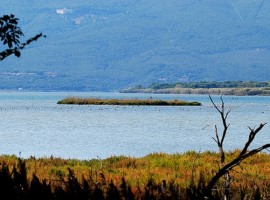 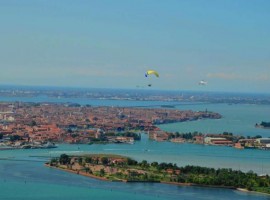 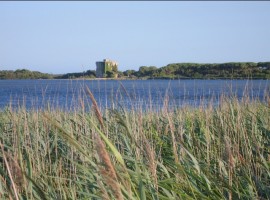 Walking in Italy without any map: discover the Via Francigena by foot!