All the top sights in Rome in less than 3 hours

A combination between a push scooter and a skateboard, the “Segway” is the new trendy way to go around. You may have seen it watching movies, video clips or just browsing through magazines.
Now find it in Rome: a fun and eco way widening the offer of transport means.
If you were getting concerned looking at Rome city may and trying to figure out your itinerary now things get much easier and go past  to all the top sights stretching on Rome seven hills will be a joke.
Two visionary friends, Dino and Luigi, imported the idea and the vehicles to Rome some time ago and started their adventure…
The plus of Segway?
1. Environment friendly (it feeds on electricity with no pollution)
2. Take you to places which looked so far away on the city map in a short time (more time to visit, more points of interests to see)
3. Entering limited traffic area
4. Fun to drive
Is that not enough?
Let’s see how it works: meet Dino and Luca at the agreed meeting point and they will hire you the helmets (safety first!) and show you how to drive Segway (it is incredible easy: lean forward to speed and backward to slow down). Some “test drive” to get familiar before starting for your big adventure up and down the Roman hills.
A lone wolf? Ask for the city map and your vehicle and set off for your own itinerary through the magic city. The map is an interactive one and you will be able to search the most important point of interests as well as the secret address you jot down while planning your trip.
Feeling you had rather have someone showing you around and not lose any single second perusing the map?
Here we are: Luigi and Dino have exactly what you are looking for. The guys created three different itineraries whose highlights are not the monuments and palaces you will be visiting or not just those. What about once in Rome “do as the Romans do”? Get to know the locals’ favorite café for espresso or the ice cream kiosk on the Tevere river side. And what about having the address of that genuine Roman style Trastevere trattoria, typical popular restaurant, where to have a plate of “spaghetti cacio and pepe” (Roma cheese and pepper sauce spaghetti”)? Addresses and places nowadays hotel concierges do not know anymore and you will not be able to have any tips unless you know the locals.
Can’t wait to have more info? Visit www.segwayrometours.com 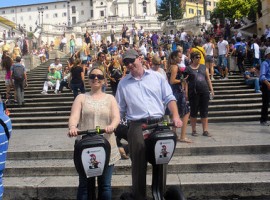 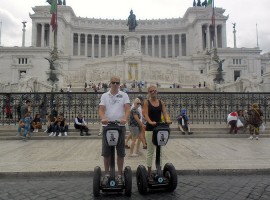 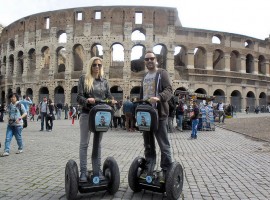 I wanna drive my bicycle

“I wanna drive my bicycle” you will find yourself singing aloud while scampering through Roman lanes and squares, crossing the endless bridges over the Tevere and stop over the Pincio terrace and  admire the view over the capital roofs and roof terraces.
The bicycle, an old transport, is now becoming trendy in Rome and in many cities:
1. No parking problem (except for bike stealing but a chain usually does)
2. No traffic jam problem (the view of tourists and locals biking smoothly asides cars in traffic jams is more and more popular nowadays)
3. No access limitation
4. Great fun
5. Exercise, though your gym is back at home, you will have the chance to train a little bit: biking is good for your health.
And if you feel you cannot make it anymore after going up and down six out of the seven hills and the Mediterranean sun is hitting you, switch on the electric engine and go go go…
Most rental bike services offer different types of bicycles: mountain bikes, tandem and even the electric ignition ones. Just pick up your favorite one.
Do not miss the opportunity to ride along the antique Appia road, one of the oldest and well preserved Roma routes, or reach some of the most suggestive catacombs just outside the city limits. 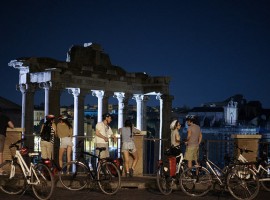 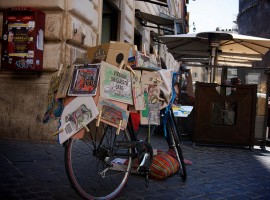 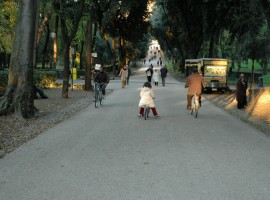 A symbol of Asian cities like Bangkok, the “tuk tuk” is now very popular in many North European cities (Zurich and Berlin to name a few) and has finally arrived in Rome as well.
What does make Italian tourists and foreigners love tuk tuk?
Let’s see the advantages:
1. No traffic jam: tuk tuk squeezes in through the endless line of cars and motor vehicles of any kind stuck up on the city roads bringing you easily to your destination
2. No restricted areas: reach faraway places and did not get stopped where cars and buses usually have to stop. You are the lucky passenger of a tuk tuk.
3. Share fun: each tuk tuk can have 6 passengers in addition to the driver. Admire the antique Roman remains, get charmed by the baroque facades of the XVII century churches and basilicas, greet the impressive fountains and take pics or just laugh and chat with friends sitting close by.
4. Go green: once again make the difference. Tuk tuk are ecofriendly motor vehicles and you will be touring the city light heartedly as far as pollution is concerned.
And if you fall in love with Rome, its golden light and its pompous palaces and hidden gems, its majestic river and the trattorias, the glam restaurants and the ice cream kiosks and decide to get married here in one of its churches and basilicas…make a great entrees and drive to the church entry by tuk tuk.
Want to know how? Just contact the guys at tuktuktour. 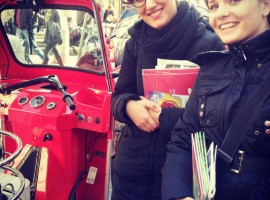 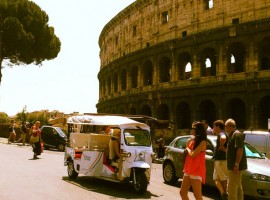 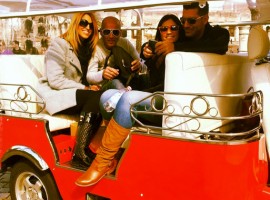 Feeling tuk tuk is not safe?
Well, ask Nick Gough and Richard Sears, the two guys who rode the whole world by tuk tuk to raise funds for the right to education.
They travelled from the chic Paris to the red sands of the African deserts, from Cape Horn to the icy lands…they challenged weather conditions, bumpy roads, bureaucratic obstacles and every possible danger in a tuk tuk.
Do you really think Rome can be more dangerous than that?