Are you thinking of a different winter city break? No snow trails and no skiing?

Turin is your place!

Long underrated and disregarded in comparison with well known beautiful Italian cities like Rome, Florence, Venice or Naples, Turin is now gaining more and more reputation as the Italian capital for modern art.

Its private and public museums and foundations house modern and contemporary art collections none to any other in Europe: Foundation Re Rebuadengo, Mario Merz Foundation, Museo Arte Contemporanea Castello Rivoli are just a few you can name.

The art challenge of Turin is becoming even more ambitious: unlock art from institutional places and let it live free in the city streets.
Since winter 1998 the best known artists and performers have been invited to cover the city streets and main places with their works.
Turin shines with lights and fairy atmospheres on occasion of each “Luci d’ Artista” event from the beginning of November till the beginning of January : does it not remind you of “Winter solstice” celebrations when primitive men greeted the coming back of their vital star, the sun? 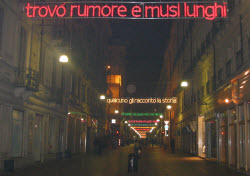 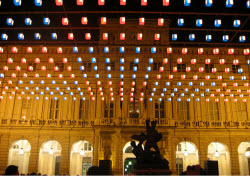 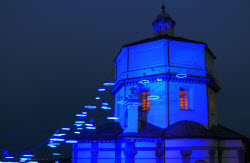 Artist lights in Turin Christmas 2013 by Fabio Rava via Flickr 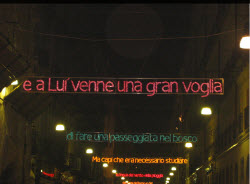 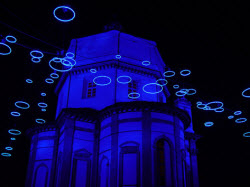 Artist lights in Turin Christmas 2013 by Pietro Izzo via Flickr 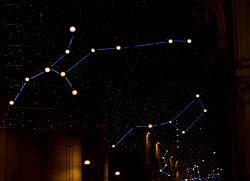 And if you are even dreaming of combining your modern and contemporary art escape with a touch of healthy exercise, do not  think you are asking too much from the city which was once the capital of Italian car industry.

Turin has a new life on two wheels with “ToBike” 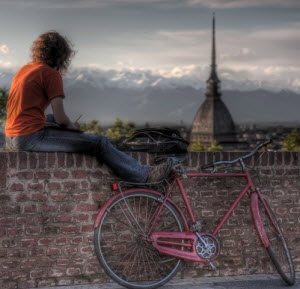 The city has been implementing a bike rental circuit over the last years and it has proved a great solution to tour the city in a safe and economic way.
The daily card costs € 5 and the week one is € 8 on top of an annual card you can buy for € 5 on the web (www.Tobike.it).
Bike stations are to be found at almost every city corner and the city itself has a circuit of approx 175 km of bike trails.

Start your art bike mission picking up your bike at the bike station at Piazza Carlina (rated 4.2 out of 5 in ToBike bike station ranking) and ride to Via Maria Vittoria to admire the “Vele di Natale” installation (“Christmas sails”) by Vasco Are.

Ride along Via Carlo Alberto, one of the main city streets, and admire the “Volo su” work by Francesco Casorati and eventually reach Piazza San Carlo where the architect Alfredo Jaar presents his idea that public art can change society via a mathematical formula in neon, “Cultura = Capitale ” (“Culture= Capital”) on the National Library walls.
And straight to Via Roma where Carmelo Giammello has his “Planetario” on show: star constellations float in the city night and you can’t but stop and pointing at each one trying to remember what you studied at school.
Follow the tourist signs to Museo Egiziano (Egyptian Museum) and proceed to Piazza Carignano and look at “La mia Luna” (“My Noon”) by Thomas Ehrberger before reaching Piazza Palazzo Città and dream of exotic atmosphere with “Tappeto volante” (“Flying Carpet”) by Daniel Buren.
Could the architectural symbol of Turin be missing to play its role in this annual art appointment?
Of course, it could not: the “Mole Antonelliana” is enriched with Mario Merz’s “Il volo dei numeri” (“The numbers’ flight”): the light installation reproduces the Fibonacci numbers or the Fibonacci series of prime numbers.
When you feel biking proves too hard, your legs are trembling and you have many works still to spot all through the city, well do not quit: just park your bike at the closest bike station and get on the “Light on bus!” 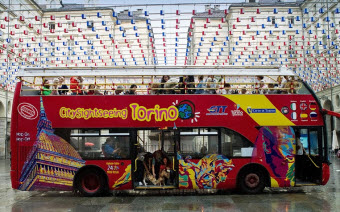 An open roof red bus is touring the streets of Turin at night on occasion of the “Luci d’Artista” event all through December.
Tourists and locals can admire the enlightened skies of the city comfortably sitting on the bus seats: just wear a warm and comfortable coat, scarf and gloves.

But remember lights, modern art foundations and museums are not the only reasons to visit Turin: after a day dedicated to art, you may wish to relax and have a “bicerin”, a specialty made of coffee, chocolate and cream or a “gianduiotto” the typical noisette chocolate famous all over the world.
Mind you: the real Turin gianduiotto melts in your mouth and it is like a cherry: you cannot but pick one after the other. 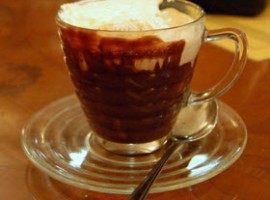 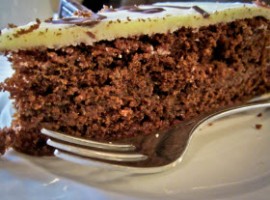 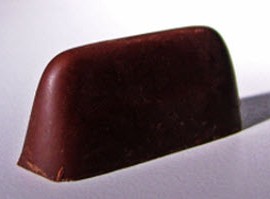